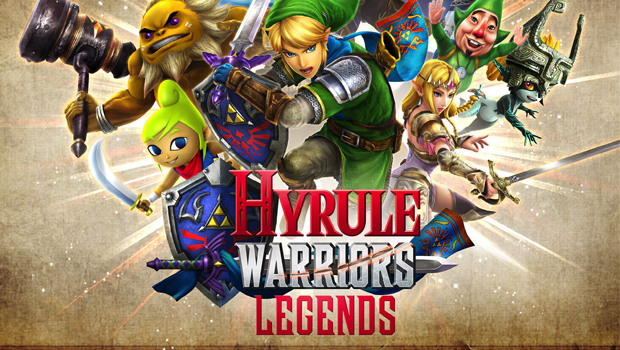 The aptly named Hyrule Warriors Legends is exactly what you’d expect from mixing together The Legend of Zelda and Dynasty Warriors. Add one part revered legacy to one part unapologetically repetitive series, and the resulting product is… actually, not half bad. Between the enjoyable Zelda characters, thematics and storyline, and the addictively hypnotic simplicity of destroying thousands upon thousands of enemies, Hyrule Warriors manages to make this formula succeed above and beyond the sum of its parts. Never before have I played a Dynasty Warriors spinoff that pays as much respect and homage to its original source material. The best thing about this game is that it actually plays and feels like a Zelda game.

Besides the familiar sound effects and musical score, there are nearly 30 playable characters pulled from across the Zelda spectrum. This 3DS release even features a handful of new playable characters, including a female version of Link named Linkle and Toon Link from The Wind Waker. The variety in fighting styles and how well they capture the feel of the different characters is one of the shining points of the game. Classic Link remains my favorite character, he has a straightforward fighting style that excels at taking out large groups of surrounding enemies. But other characters such as Shiek with her ninja infused harp attacks and Darunia who slams the ground with his giant hammer, add a unique and refreshing feel to the game.

Hyrule Warriors is the perfect game for a handheld system. It combines two of the best genres that are ideal for mobile gaming: the epic RPG (play it anywhere, not just in front of a TV), and the pick-up and-play action of Dynasty Warriors, perfect for filling life’s boring gaps. They each serve a different purpose, but in this case, Hyrule Warriors is able to fill both of these voids at once. It has a classical RPG storyline, with a character leveling system, and simplified combat that primarily focuses on slamming attack buttons inside a swarm of enemies. I wouldn’t go as far as calling Hyrule Warriors an extremely challenging or complex game with a deeply expressive storyline, but I will say that it’s a lot of fun to play in both short and long bursts, and the Legend of Zelda story keeps me interested and wanting  more.

The story is actually one of the best qualities of this game. It’s simple and should be familiar to anyone who’s ever played a Zelda game, but that doesn’t mean it won’t surprise you along the way. Princess Zelda gets kidnapped and Link, a legendary and fate-bound hero, must go on a quest to save both her and the whole world. I’m actually more than a little bit impressed by the way this game’s storyline weaves together the different Zelda titles of the past. Being already roughly familiar with the stories of Link and his many incarnations, I was immediately more engaged in the game from the start, but I don’t think being a Zelda fan is at all necessary for understanding or even appreciating the story of this game.

The core gameplay is just like any other Dynasty Warriors title. You control a warrior in battle across the map, completing various objectives and advancing the story. One of the hallmarks of the Musou series is the element of controlling a massively overpowered character amongst a sea of weak enemies. This sense of power is certainly still at play in Hyrule Warriors Legends, but it’s finally somewhat explained by the Zelda storyline. Link (your primary character) is described as being a reincarnated legendary and unstoppable hero that can overcome any adversity. Knowing Link is supposed to be overpowered according to the storyline helps make the idea of mowing down literally thousands upon thousands of enemies easier to swallow.

Hyrule Warriors Legends also makes excellent use of 3D in its handheld release. I may be alone in this regard, but I only ever play my 3DS with the 3D turned on. I know a lot of folks say it makes their eyes hurt and it’s not as fun. But everything — the cutscenes, the dozens of bodies flying in the air and the enemy attacks hurtling at the screen — just looks better in 3D. Hyrule Warriors Legends plays on all 3DS’ but it will only play in 3D, and at full framerate and resolution on the New 3DS. The New 3DS version has solid and smooth graphics; I don’t think I  noticed a single slow down in the frame rate. The fighting moves quickly and there’s an impressive amount of enemy bodies portrayed on the screen at any given time. The only graphical issue I noticed was the pop-in of enemies. This is more an aesthetic and less a gameplay issue because you can always refer to your map on the bottom screen to identify enemy locations, but it can be a little jarring to see enemies seemingly teleporting into the path that you’re running.

Hyrule Warriors Legends stands out, as both a Warriors game and a Zelda game, mixing the best of both for a truly unique, portable experience. The story and characters are what really drive the interest in advancing through what might have otherwise been a slog of a brawler, but the action driven gameplay also keeps it fun and exciting. It’s not a perfect game by any means, it can be just as basic and repetitive as any of the Dynasty Warriors titles, but somehow by pairing up with the rich and imaginative world of Zelda, Hyrule Warriors manages to become an exceptional 3DS title that is both immediately entertaining and continually engrossing.

Combining the familiar elements from the Legend of Zelda with the simplistic hack-and-slash gameplay found in Dynasty Warriors makes Hyrule Warriors Legends a great game for quick bursts of pick-up-and-play, that also offers a rich storyline that handles the source material with a noticeable level of honor and respect. Whether you’re a Zelda fan or a Dynasty Warriors gamer there’s a lot to be happy about in this mash-up title.

Stefan started gaming the day his dad brought home a shiny, brand new commodore 64. He's been hooked ever since. Whether he's leveling up his ninja in Final Fantasy Tactics, cruising the streets of San Andreas or working on his Terran build order, videogames are never far from his mind. He is currently on the lookout for an appropriate 12 step program to address his electronic addiction.
Related Articles: Hyrule Warriors Legends
Share
Tweet
Share
Submit