Point-and-click games have been around since the early days of gaming. From fantasy adventures to wacky situations with teenagers to role-playing parties and more, this genre has covered many different scenarios. This time, you take on the role of — you guessed it — a clam man who works in an office building and stumbles upon a conspiracy that he intends to unveil. Strange, I know, but it’s a charming experience all the same. 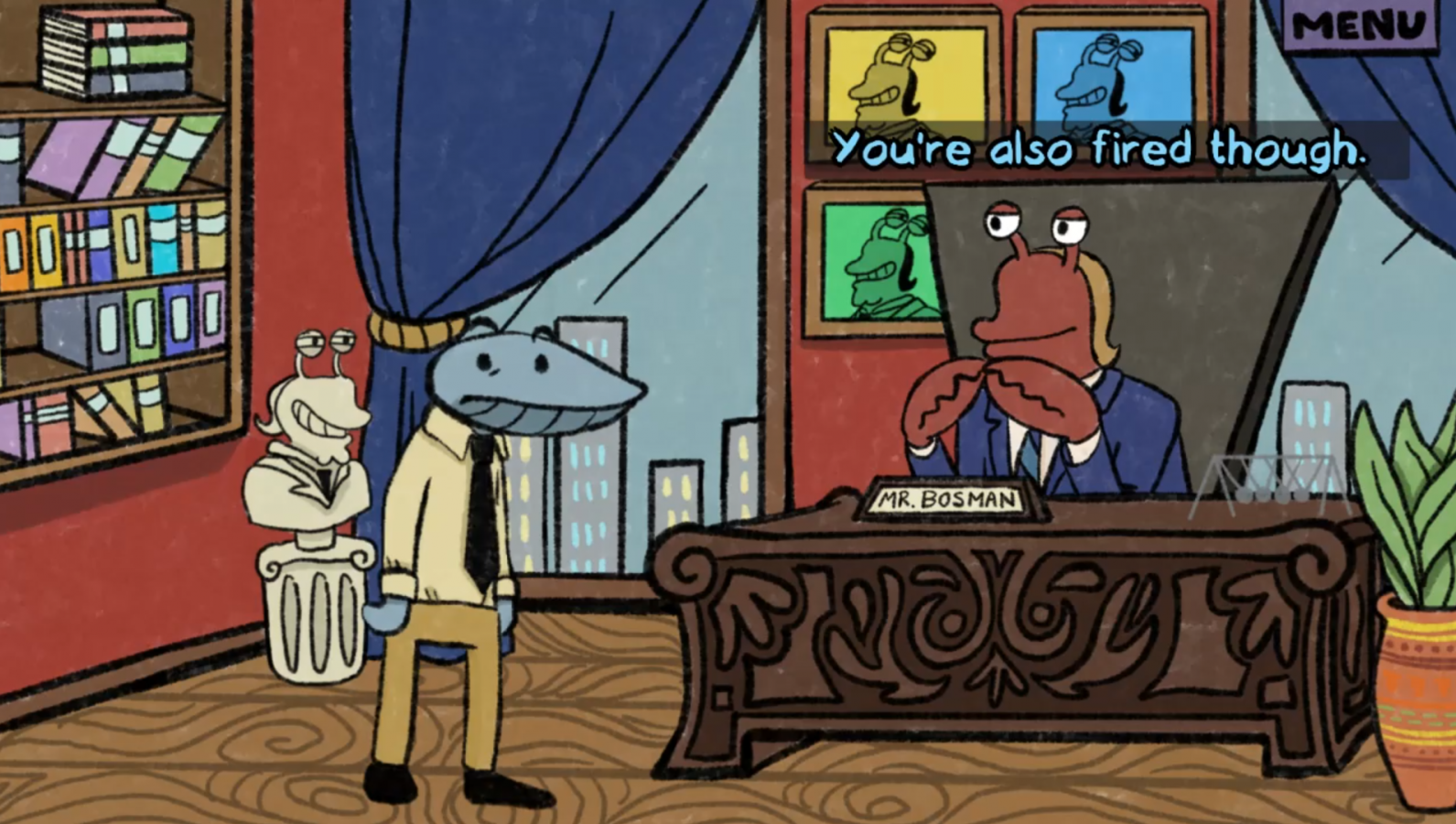 As previously mentioned, you play as Clam Man (yes, he’s a clam man named Clam Man. They poke fun at that in a few conversations during the game) who works at the Snacky Bay Mayonnaise Company. Clam Man was recently promoted to junior sales representative and is just working another day on the job. It isn’t long before one of his co-workers, Pete, mentions that another co-worker, Lindsey, got fired. After a short conversation, you learn that your boss has requested you in his office, so you make your way there. Make sure to talk to some of the wacky co-workers along the way; they’ll make you chuckle with their absurd personalities and mindsets. You end up getting fired, and after talking with Pete at the cafe, you realize that there’s something fishy going on. This begins your investigation into the shady business going on at Snacky Bay Mayonnaise Company.

Gameplay follows the standard point-and-click formula: click to move your character, talk with NPCs, and interact with your environment. Most of the game revolves around walking and talking to people. I highly recommend checking out as much of your environment as possible and talking to as many NPCs as you can. Just like the co-workers I spoke of earlier, the other parts of town have plenty of wacky, absurd humor to offer. Some of this absurdness comes from Clam Man himself, and I appreciated his corny and sometimes sarcastic comments. If you like nonsensical humor, then you’ll get some good chuckles out of your time with the game. 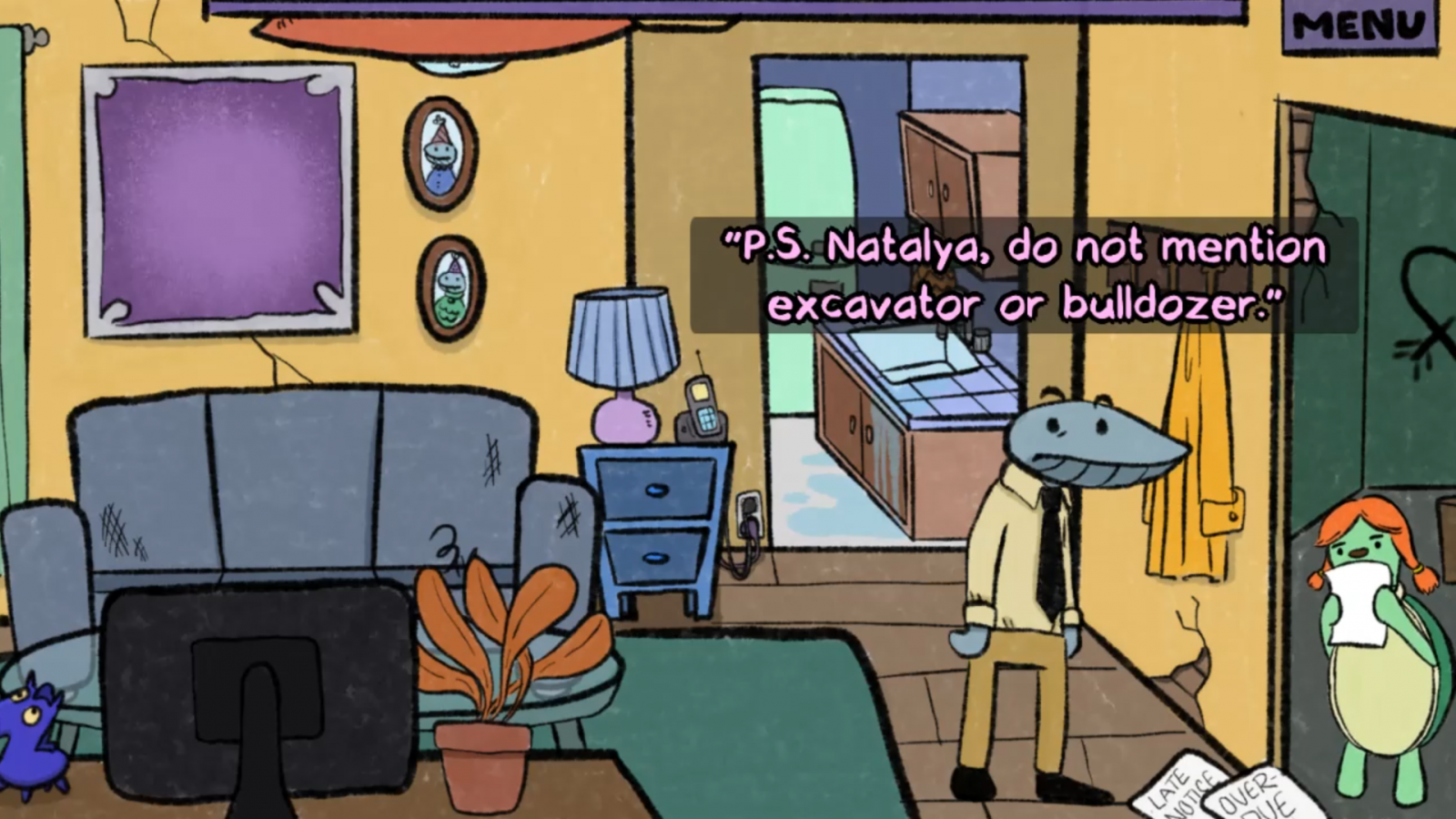 Point-and-click games tend to have puzzles in them that help break up the monotony of conversations while also challenging your problem-solving skills. In this case, there aren’t many puzzles to speak of, and the ones you encounter don’t take very long to complete. There are only a few, and only one of them took longer than a minute to figure out. I wish they had been a little more challenging or at least involved a bit more effort. A good puzzle can boost a game’s reputation, and I think it would’ve helped here as well.

As for length, Clam Man took me about two hours to complete, which isn’t necessarily a bad thing. That being said, the game’s plot felt kind of rushed, especially near the end. It was building up a conspiracy that felt like it could’ve become something greater. I felt like I went from starting the investigation to discovering the truth all too quickly. Sure, by the end of the game you don’t learn everything — there’s a larger truth that remains a mystery and is teased for a potential sequel –but what we do learn could’ve been spaced out better than it was. There was a good framework for a wonderful story, but it wasn’t pushed to its full potential. I’m not saying Clam Man was bad, but it could’ve been better. 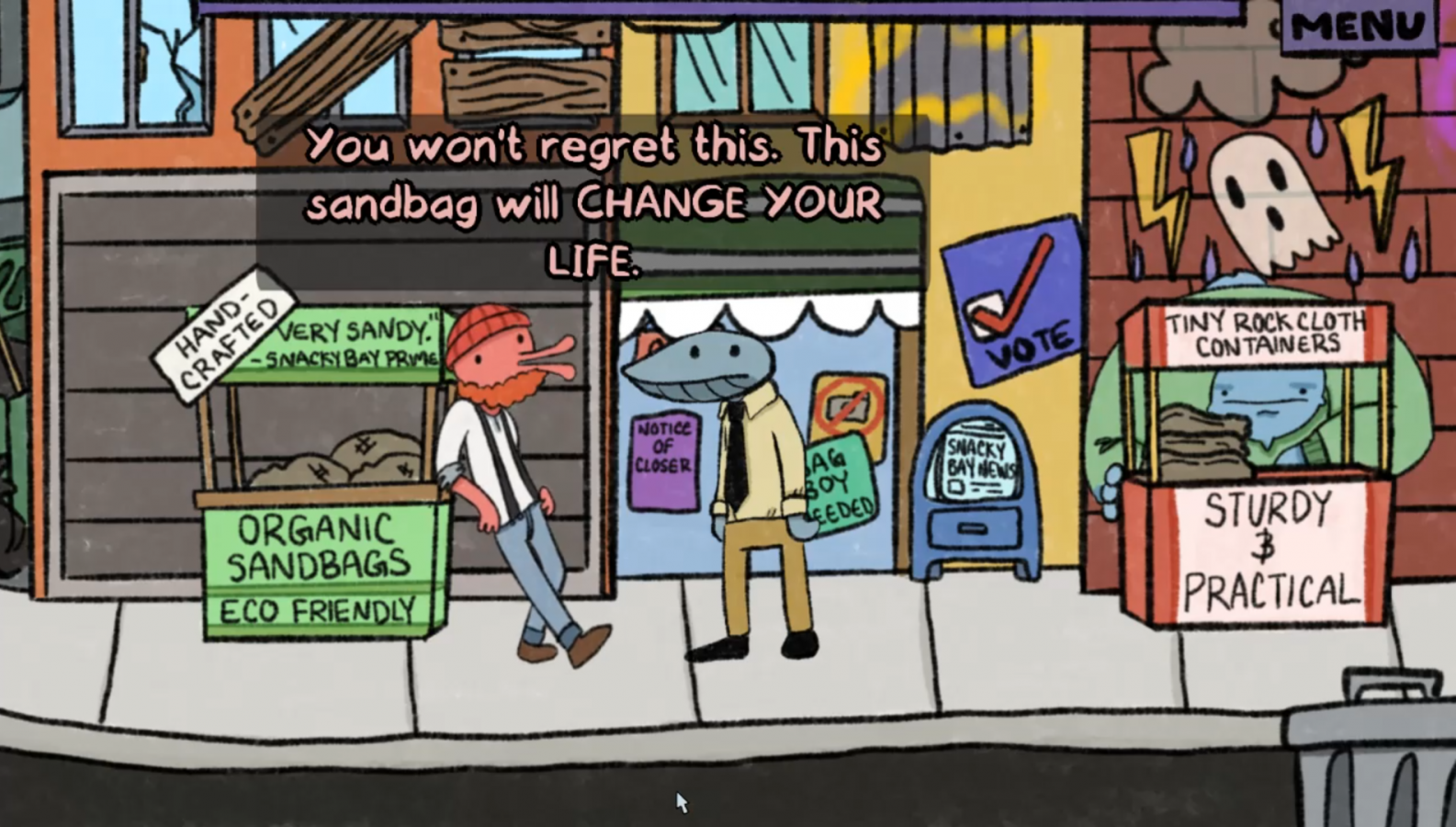 The game’s aesthetics are simplistic and cartoony; they match the tone of the story and character personalities. The sound design is odd though. The background noise goes from very quiet or silent to overly loud music without warning. Outside of gameplay recording, I had to turn the sound down to counteract the loud moments at the cost of losing the quieter moments. Also, there’s no voice acting, which isn’t a big deal, but every character makes the same noise when talking. They all emit a deep electronic “blub” type noise that doesn’t feel right with any of the characters. Games like Chook & Sosig give each character their own noise, and I think Clam Man would’ve benefitted from this being done as well. Even so, the game provides a nice little point-and-click story to occupy a few hours of your time. It may not be the best the genre has to offer, but it’s still a charming experience all the same.

Clam Man is a short yet quirky point-and-click game. The story feels a bit rushed at times, and the puzzles aren't all that tough, but it shows promise. Some more attention could've been given to the sound levels and design, but it's not enough to ruin the game.

Codi loves to play video games and watch movies. He will watch almost any kind of movie just to experience them. His ideas take inspiration from the shows and movies he watches, and games he plays. He also loves a good pun.
Related Articles: Clam Man
Share
Tweet
Share
Submit