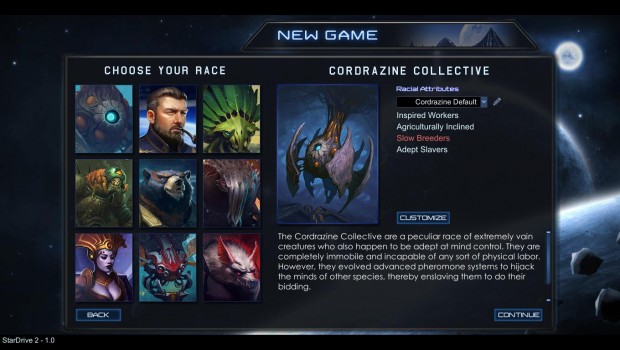 If you take a moment to absorb all that Stardrive 2 lays before you when it begins, you might get a small idea how vast it actually is. Even after that, when you believe you’ve swam far out into its star crusted waters, you’ll come to find you’ve still only waddled ankle deep into its bustling universe.

Stardrive 2 is one of those games that very much delivers on its offer to provide you with a rich, complex, and challenging interstellar RTS experience; and that’s something you’ll know less than 30 minutes into the game.

It’s at the seventh, fifteenth, and perhaps the 30th hour that you might start having some doubts; but let’s take some time to enjoy the scenery before we start complaining about our allergies.

There is very little written in stone regarding Stardrive 2’s presets and starting templates. Be encouraged to pick what you like and then build what you want.

Nine different racial presets are available to you at the start, all of which are customizable from their name, to their culture, to how quickly they breed. From there you can choose the formation of your star cluster, its size, the density of habitable or mineral rich worlds, and the encounter rate with hostile alien threats lurking throughout the universe. All of these options have a truly robust portfolio of various pros and cons, which when tossed together into the games’ randomized world generator can lead to some pretty cool cosmic landscapes.

Sometimes you hit the jackpot, beginning your journey in a star system jam packed with ideal planets. While other maps will wedge you in the armpit of the universe, where your own polluted waste of a home world is the best of the worst options for light years around.  Combined with some other self-propagating variables, such as derelict alien cruisers and galaxy jumping wormholes, there is little chance of rolling a world-state you’re familiar with even twice.

Hot stars, cold stars, luke-warm stars, or no stars- each of these little dots expand into star systems eager for your arrival or form a fuel guzzling abyss.

Once your galactic landscape is established you’ll be introduced to your homeworld, ripe with all its strengths and troubles. If you have the tutorial enabled (which I strongly suggest if this is your first encounter with Stardrive 2) you will be kindly taken by the virtual hand and walked through a considerable amount of your world building, fleet constructing, and exploration features. It won’t go into every detail, but it does efficiently explain the basics. Such as how farmers farm, how builders build, and so on, while pointing out where you need to look and read to comprehend those functions in greater depth.

Many interfaces, such as those used to govern your occupied worlds, are streamlined of optimum efficiency, but can pull down into more detailed variants when desired.

The tour guide’s voice over is pleasant and engaging enough to pass for some of the better books on tape I’ve heard. However, if you have a short fuse for such things, a quick click of the skip tab and the feature evaporates until it next senses you spinning your wheels. This encore entry of gameplay aid is one time show, though. So if you’re worried about reliving the your health is low nightmares of the early Fable days, don’t be.

Delegating your distribution of wealth, labor, and research isn’t all that you’ll be governing in Stardrive 2. Taking some time in the shipyard and blueprinting your armada’s numerous vessels will also occupy a considerable amount of your time. And it will be time well spent when you do it right.

Each species and culture comes with an assortment of ship chassis, or hulls, which you can either load out from a collection of included designs, or customize and build on your own. There are dozens upon dozens of parts which can be further augmented to perform exactly how you need, allowing even the most modest of designs to have some serious bite.

While the default load outs for your various hulls will often prove satisfactory, fine tuning various craft to match your own play style will prove indispensable during challenging engagements.

This aspect of the game is easily the most intricate, requiring you to balance, strategize, and consider the cost versus reward of each of your concepts. So expect to deploy a few glass-cannons as you learn your way around the shipyard, and keep your saves well titled and spaced.

As your civilization expands and evolves, new and better technology will become available to you, allowing you to build deadlier ships, or refit old ones to perform different roles.

Although you’ll still be far from prepared to take on the galaxy’s various dangers early on, Stardrive 2 will start you off with just enough to get the wheels of your planetary colonization rolling. Once the affairs of your birth land are in order, you can take off into the cosmos and see what it has in store. That means combat.

Fleet combat is a combination of automated functions, manual commands, unit might, and sometimes brutal luck. Two on-screen frigates can duel for 20 minutes, while a large multi-ship engagement will be resolved in a fraction of that.

Whether it’s because you got tired of a rival empire looking at you funny, or a pirate junker rushed your worlds while the fleet was away, sooner or later your sailors are going to get their hands bloody and their ships are going to lose some paint. Depending on your tastes and sense of control, Stardrive 2’s battle system will strike you as either a work of interstellar RTS poetry, or slow convoluted chore. For newcomers this may be in part to the fact that of all the times for the tutorial to take a hike, your first combat encounter would not be when you expected it.

It took me a while to figure out what I was doing in my first sortie, including the fact the ship I was fighting with didn’t have a single weapon. Just like all the other elements of the game, there are layers upon layers of mechanics, but unlike most of the others, this is when the penalties are very real, abrupt, and difficult to recover from. Losing a single explorer vessel might result in a shrug and few wasted turns to replace it. However, the loss of a freighter during hard economic times and lead to the death of a colony, and that’s a raging quitting threat.

While the game doesn’t exactly suggest it, the battle arena available at start is there for you to test not only your fighting skills, but also your ship building and fleet strategizing talents. Like the campaign, there are no training wheels to help you find your balance, (at least at the time that I played it) but you will be able teach yourself the mechanics without potentially risking hours of careful world development or an explosive erosion of patience.

And this is where the rose shows its thorns.

Stardrive 2, for how welcome it makes you feel and all the guidance it offers early on, understandably pushes its gamer chicks out of the nest at some point. And that’s fine; even a good thing. But with a title which contains layer after layer after layer of different gameplay styles piled on top of one another like a tall stack of pancakes, I would have preferred to be the one who decided when that coming of age moment should be. True, you can manually visit the tutorials when you like, but it feels a little odd that the times you need to do that is when the game most actively shifts from being a turn based endeavor into a real-time one.

Another thing is the sense of balance and progression this game offers is a bit…weird. Eight turns to build a starship, 15 turns to build a factory- alright, I can get down with that. Until I realize it’s been over 30 turns and I still don’t have a sense of progression because I have no income, (even at the highest tax rate for my species it would take over 15 turns to buy a single ship) my civilization is miserable from overcrowding, (a situation I couldn’t change because the nearest habitable world was a desert waste) and I was trapped inside my local cluster because any expedition sent beyond it was ripped apart by hostile forces.

These irritations continued on to my first ground combat using troops. I thought the feature was awesome, but was marred when I realized that it was also one of the cheapest looking parts of the game. My unit’s movements were awkward, the interface was a bit clunky, and the color pallets indicating things like where I could move or my field of attack tended to smudge against the background. It just didn’t feel polished, like it was a cool afterthought no one wanted to abandon but no one had time to finish.

The few ground battles I took part in just didn’t compare visually or functionally to their space-faring brethren.

Altogether, it was issues like these that ultimately compiled my final gripe; Stardrive 2 struck me as a truly awesome game, but just a bit too much of one. There are so many things going on here some of them seem to eventually get in the way of others. Like when a burrito is too big and more of it winds up in your lap then your mouth.

In itself, that isn’t exactly a bad thing, but it is distracting and a bit haphazard. Sure you can compensate for one frustration by adjusting something else, or even taking what you’ve learned and starting over. But that’s right around the time where understanding the game gets muddled with playing it, and having fun gets distorted with trying to complete it. There are definitely players out there who find this kind of sweeping complexity thrilling, and yet others who would argue it’s what this type of genre is all about; and they’d have a point. (Especially for an 4X RTS such as this, which is known for it’s imposing density and micromanagement.) But in the case of Stardrive 2, which puts such a gratifying effort into making you want to play it, as opposed to daring you to try, I doubt that was the case.

Stardrive 2 is an extremely ambitious title which I’d strongly suggest for fans of compulsively intricate gameplay. There are several different tactical genres in one here, which while varying in quality, are all filled with customization options and functional design. The only real downside is all this diversity can easily become too much for players not willing to invest the time and energy required to master Stardrive 2’s numerous mechanics over and over again. This is a very niche game, and it would take playing it to know if it’s right for you.

I've been a huge fan and critic of games and movies ever since I had a voice to speak about them. I love power and influence of great storytelling, interactive and otherwise, and now want to be more than just a consumer. My biggest strength in this regard? Almost every time, I'm fair all the time.
Related Articles: Stardrive 2
Share
Tweet
Share
Submit