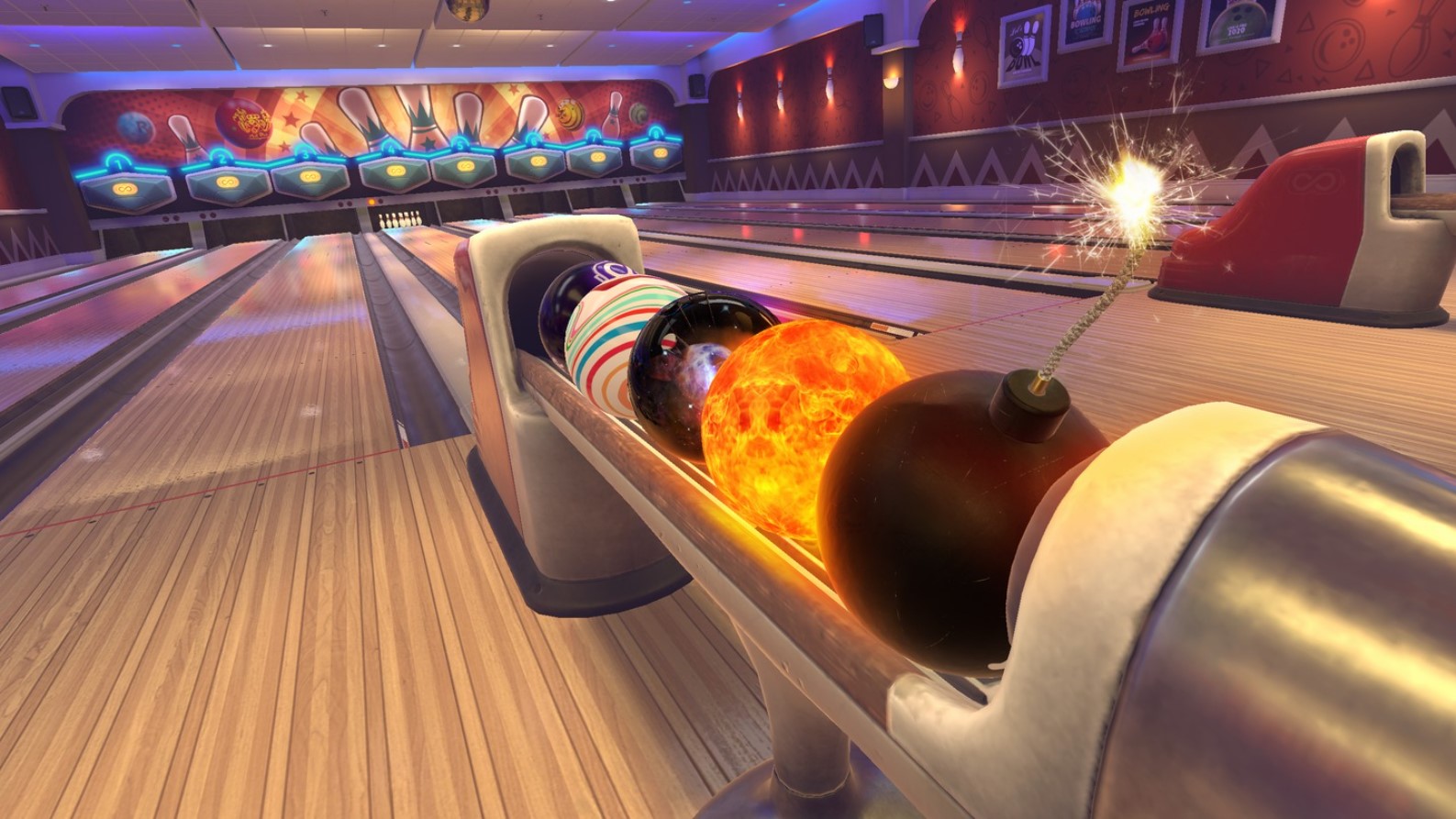 I’m not the best bowler in the world, but I certainly enjoy a good round or two with friends. There’s something about the comradery and competition when it comes to the sport, friends encouraging one another to hit the spare or facepalming when a gutter ball costs them the win. It can be both casual and professional in a way many sports cannot, but in the midst of a pandemic we’ve been forced away from the alley, left to wait for the doors to reopen. Well, I’ve found another option for you, and probably the best part will be you won’t have to rent a pair of stinky alley shoes to enjoy it.

ForeVR Bowl is a faithful recreation of the sport we enjoy, both giving options for casual players as well as those who may want to engage competitively. It’s going to appeal to those who play Wii Sports, but have enough depth to entice those looking for a challenge. You start off with a quick tutorial to give you an idea of the controls, and after that you’re thrown right into the lobby to figure it out from there. The lobby is a pretty spiffy spot, with a trophy wall to show off your achievements, a pro shop where you can unlock different balls, and is a nice hub to explore before heading into a game. You can tell right from the get go there’s a lot of content, but we’ll get into that momentarily.

In the middle of the hub is a pylon where you set up your games, and it ranges from single player arcade styles, pro matches, multiplayer, and practice runs. It’s simple, but that’s all it needs to be, giving you different options and putting you in the alley. One of the coolest things about this is the amount of unlockables there are. While I’m hoping to see some more “arcadey with mini-golf course obstacles” style set ups in any future content, there are a bunch of neat alleys, especially the underwater “Lost City” one that was just added for free. You can also interchange the lane patterns with the style of the alley, and while not necessary, it’s appreciated. 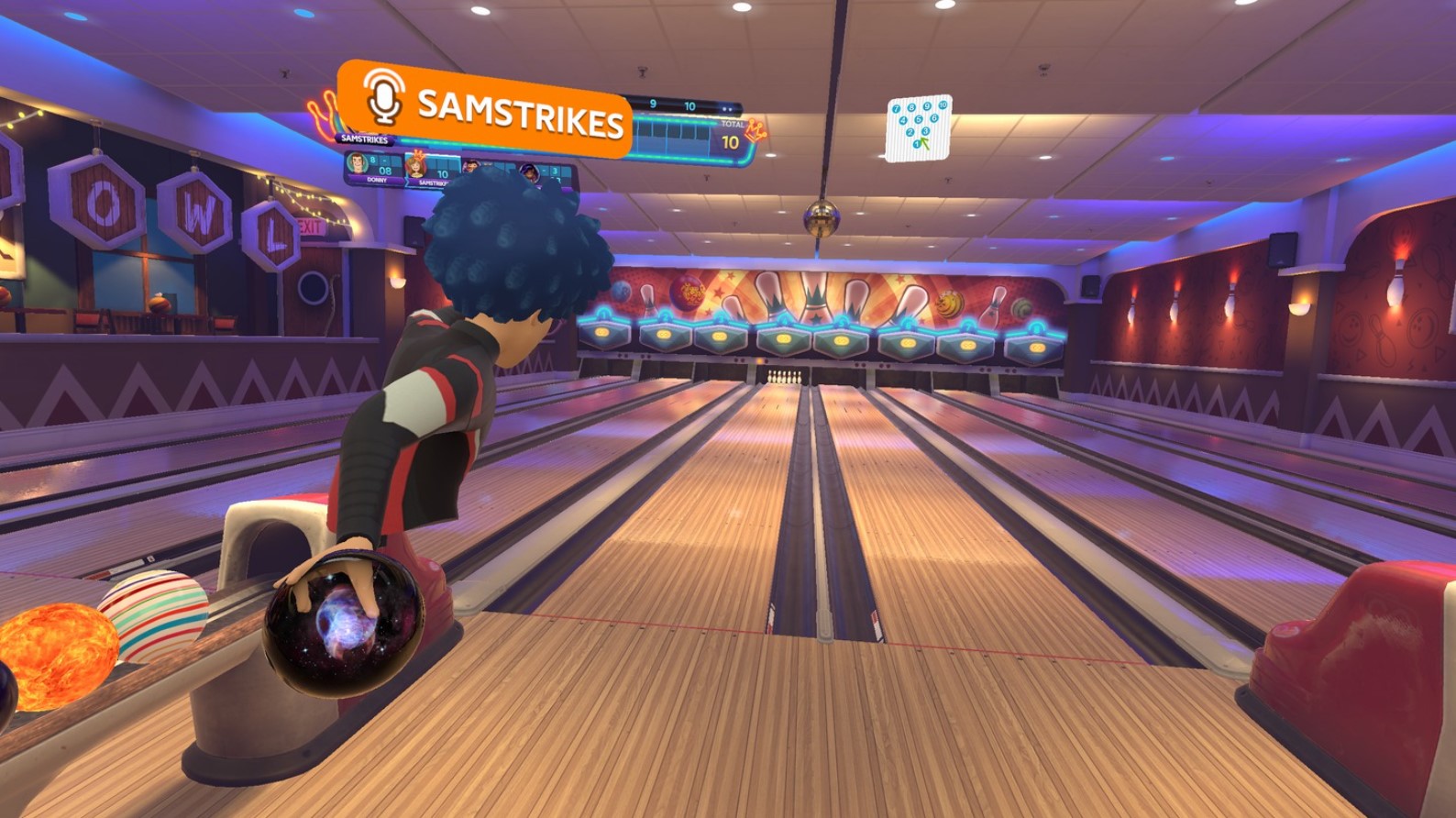 So, the actual bowling. I mean, that’s why you’re here, to figure out whether or not this is worth dropping a few bucks on. What ForeVR Bowl crafts is so enjoyable you really don’t want to put the headset down. This is reminiscent of when I first picked up a Nintendo Wii just to play Wii Sports, you had such a blast playing it with family, and because of the motion controls you didn’t care that it wasn’t the most graphically intensive or applying a heavy narrative. It was the fact that the motion controls left you with the feeling of being at the alley, and that’s what made it fun. Even the teleport and movement system are spot on, and I zoomed around easily and was able to position myself in the optimal area to chuck my bowling ball every time. ForeVR Bowl is one of the most immersive VR experiences, not because it’s perfect in every facet, but because it captures having a night of fun at the alleys.

Capturing the sport is certainly what is being aimed at, and since we’re already talking about aiming, let’s get to the tracking. It’s pretty spot on, and even though the weight of the ball is missing to add that extra umph, I never felt like this mimicry was hurting over it. When I say it’s like you’re at the alley, it really was, down to that ball that rolls too far left because you put a little too much behind it. This is really different from Wii Sports in that I never felt like I could figure out a flick that would always land a strike, how hard you throw matters and the tracking captures the nuance of said throw. It’s very hard to cheese the system here, and it leaves you wanting to learn the ins and outs of how to make the perfect throw, which is just great design work. One thing I would suggest, make sure you have a good sized area to bowl in, as my swings caught a piece of furniture a time or two during my time with the game.

There’s obviously been a lot put into building this title, and you can see that in the bowling balls themselves. You aren’t just grabbing a random bowling ball and throwing it, each one has different attributes that will help you drop the most pins. Some are easier to spin, others are weightier so you can hit the grouping of ten-pins with more impact, others may avoid the gutters easier. Of course, if you want to have even more fun with it, there are the more crazy pins, like ones that light up, glow, and one of my favorites that has an electrical charge that explodes upon smacking into the pins. Keep in mind you aren’t going to be able to use all of these in the Pro mode, where it’s all about doing things by the book, but it’s a fun addition. Even better, I couldn’t spot any microtransactions tied to them, so it’s all about earning them, whether by your level of play or coins earned while playing. There are over one hundred of these so far, and I get the feeling there will be many more added over time. 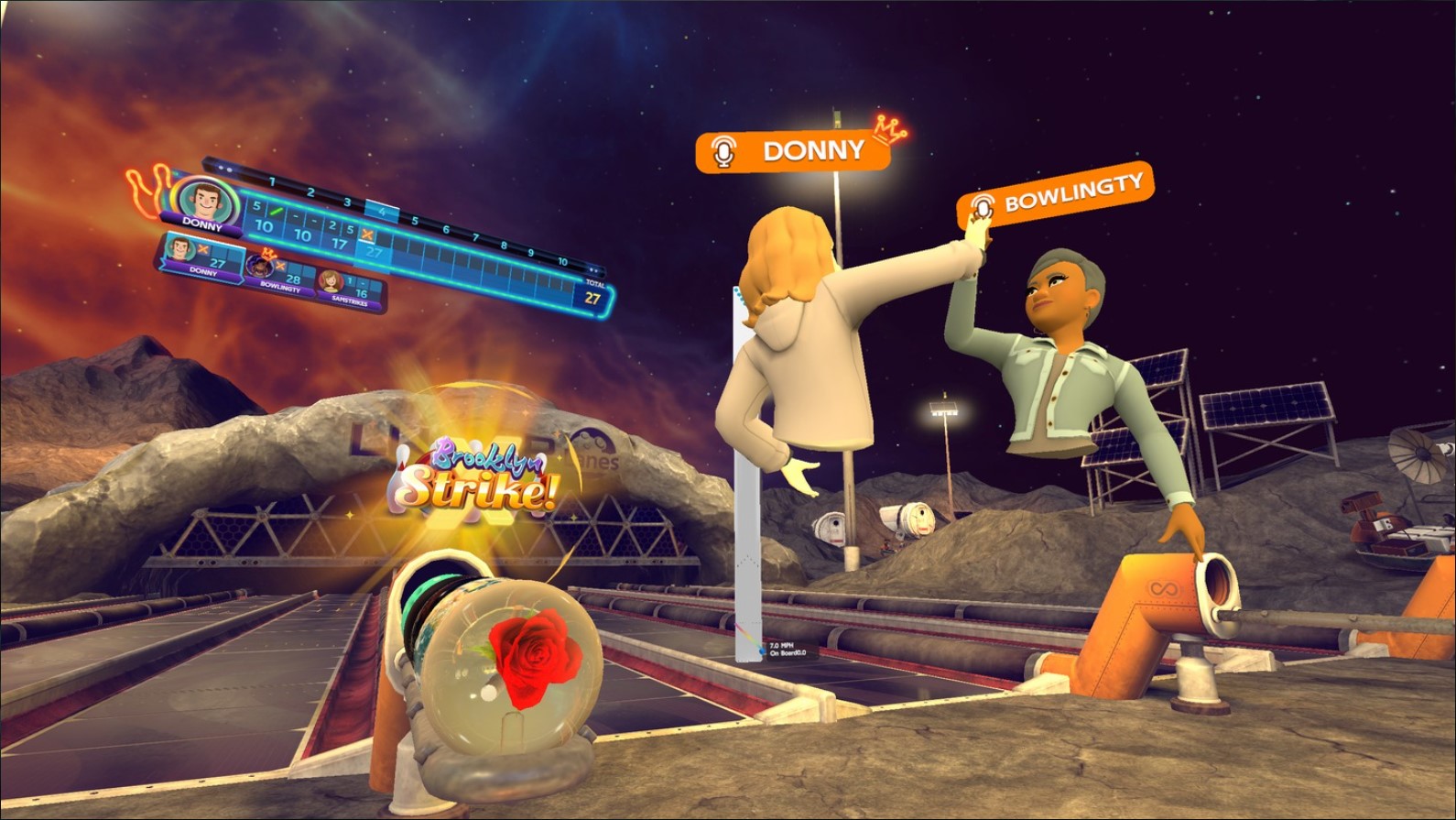 One of the things that is neat to look at is the indicator that shows up when you throw a ball. This little map shows you the speeds your ball was rolling at, the path it took, and even can show where you should probably place the ball to pick up the spare. I didn’t give it a lot of thought per say, but it is a beneficial thing that will help you to figure out how to use the different bowling balls effectively as well as gain more skill in playing the game. They always say “it’s the little things in life”, and every advantage you can get is nice, especially if you’re playing for a spot on the leaderboards (another fun extra in ForeBowl VR).

While all of these things make their way into ForeVR Bowl flourishing, where the game is even more fun is when you get friends involved. You have the option of passing the headset around, but you can also play with up to four players online, and in my time playing online it felt like I was right there with my buddies. A hovering avatar appears, but there’s more to it than just that. ForeVR Bowl takes advantage of the Oculus Quest microphone, so we were able to chat, and there’s even the little added bonus of the avatar lip-syncing with what you’re saying. We were able to chat and fling bowling balls down the lane very easily, laughing at our bad throws and cheering each other on when we hit a strike.

Now, this may seem like an extra not worth talking about, but I think it’s the bomb. ForeVR Bowl forgoes spending a bunch of cash to give you 20 licensed songs, and instead utilizes a YouTube player, where you can pick from some of their curated playlists or even sign into your own account. It’s a little touch, but even with an ad or two it’s super nice to be able to choose from tons of music to listen to while you bowl. I intentionally chose the classic rock playlist, because anyone who’s ever been bowling in real life knows that jukebox is dropping those bangers left and right.

ForeVR Bowl is the perfect way to bowl with your friends in the middle of a pandemic, and maybe even once the lanes are open again. There’s plenty to do, lots to unlock, and throwing a ball feels deeper than Wii Sports did back when. Immersion is always going to be key to VR experiences, and just in gauging that, ForeVR Bowl knocks down all ten pins for the strike.

David Burdette is a gamer/writer/content creator from TN and Lead Editor for Gaming Trend. He loves Playstation, Star Wars, Marvel, and many other fandoms. He also plays way too much Call Of Duty. You can chat with him on Twitter @SplitEnd89.
Related Articles: ForeVR Bowl
Share
Tweet
Share
Submit