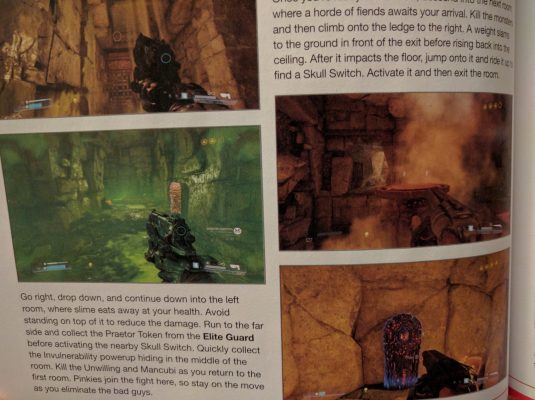 Doom is a pretty straightforward game, but much like the original game, it’s also full of secrets. Authors Doug Walsh, Michael Owen, and Will Murray have teamed up with Prima Games to unveil those mysteries with a complete guide that covers the extensive campaign to strategies for succeeding in the multiplayer arena. It’s very complete, and like the game it covers, has far more depth than I expected.

The Prima guide is split into several different sections — a campaign walkthrough, multiplayer maps and strategies, a listing of how all challenges, medals, commendations, and achievements are earned, and a quick lesson on how SnapMap is used. I go into detail on all of these features in my review of Doom, so I won’t dig too far into them here.

The singleplayer walkthrough is very thorough.

The meatiest section of the Prima guide covers the sprawling singleplayer engagement. At over a dozen hours to complete, it’s as massive as it is engaging. Unlike the original, this version of Doom has weapon power-ups, character skill mods, secret toys to find, optional challenges and more. It’s chock full of content, but it’s very easy to find yourself rushing forward and missing things. While I was writing my review for the game, it was nice to have the Prima guide open as I could plan out my strategy to wring every secret from the game’s demon-infested dark underbelly. Certainly, you have the map in the game, but until you upgrade the appropriate power, collectables aren’t revealed. You can miss a lot between the game start and then. Even at that point, some areas are so well hidden that you can see the object you seek, but it’s just beyond your grasp thanks to a grate or a leap too far.

As you dig for secrets, this guide spells out the order in which you should complete objectives to ensure the game doesn’t shut you out of an area before you retrieve the items you seek. As an example, an excerpt for one section says, “Go right, drop down, and continue down into the left room, where slime eats away at your health. Avoid standing on top of it to reduce the damage. Run to the far side and collect the Praetor Token from the Elite Guard before activating the nearby Skull Switch,” which ensures that you don’t accidentally lock that Praetor Token behind a gate forever.

Praetor Tokens are key to your upgrade path.

Throughout the campaign, the game offers up three optional challenges per area. These can be as simple as killing a certain type of demon with a Glory Kill several times, finding a number of secrets, or using a specific weapon against the enemy. It’s sometimes hard to know where the best opportunities to attempt these are, but the Doom Prima Guide spells those out. In black call-out boxes at the beginning of each section, the guide advises exactly how to approach the challenge, and often where. As an example, one challenge has players attempting to kill a Lost Soul using another Lost Soul. The guide calls out a bridge where it’s possible to get these foes to clump up and kill one another with their splash damage-laden explosion.

The challenge guides are extremely handy.

Doom wouldn’t be complete without a boss fight now and then. Some of them are downright difficult, so Prima has spent a number of pages on strategies players might employ to take them down. Complete with pictures, these sections can help you figure out a tactic that puts you on the winning side. I didn’t use these sections until I got stuck on a particularly nasty (and big!) demon boss that could kill me in just a few hits. The guide gave me a few simple tips that hadn’t dawned on me, and I was able to take him down on my next attempt.

Bosses are no joke on higher difficulty levels.

Beyond the singleplayer campaign, the Prima guide for Doom also showcases all of the multiplayer maps that shipped with Doom. Alongside tactics on how you might be effective on each map, the guide also gives an overview of every powerup, module, and mode available. There’s even a section detailing all of the demon types you can transform into during some game modes, and tactics on how you can make the most of those extremely fun moments.

The guide also covers every multiplayer weapon in great detail, as well as all of the usable equipment. It doesn’t go into great depth on the thousands of possible armor combinations, but given the cosmetic nature of it, it doesn’t detract from the end product.

Multiplayer map guides could give you a better chance in the arena.

The final section of the guide goes over SnapMap. SnapMap allows players to create their own maps for Doom using an incredibly easy LEGO-like system to cobble map chunks together into a playable product. There are rewards available as you create maps, granting access to more complex pieces as your skill with the engine grows. It’s a slick way to ensure new players aren’t overwhelmed, while simultaneously rewarding those who jump in with both feet. The Prima guide for Doom covers all of the rewards, as well as a quick blurb on how to earn every possible SnapPoint.

A lot of folks offer up guides on the Internet, many of them being walls of text and little else. The eGuide offered with the physical guide for Doom provides much more. It has all of the content contained in the paper guide, but also has interactive maps (thanks to Loren Gilliland for these) for singleplayer and multiplayer, searchable tables for the long item lists, and a very friendly layout. The layout is excellent on an iPad, making it a great second-screen companion piece.

The included eGuide is surprisingly robust.

There is one way the game itself takes some of the wind out of guide’s sails — upgrades. In the game, you can spend upgrade points to reveal the maps in their entirety (once you find a console to interact with), including all collectables, runes, health, and everything else. It does deflate the need for the guide a bit, but as I said before, it simply turns it into a tool to pre-plan your route rather than a necessary lexicon. As a result, the suggested retail price for this guide at $19.99 feels a bit stiff. That said, it took just a moment for me to find it for $14.68 at Amazon, which feels more appropriate.

Full to bursting with maps, boss strategies, a full campaign walkthrough, and more, the Prima guide for Doom is a great companion for the collector or the completionist.

Ron Burke is the Editor in Chief for Gaming Trend. Currently living in Fort Worth, Texas, Ron is an old-school gamer who enjoys CRPGs, action/adventure, platformers, music games, and has recently gotten into tabletop gaming. Ron is also a fourth degree black belt, with a Master's rank in Matsumura Seito Shōrin-ryū, Moo Duk Kwan Tang Soo Do, Universal Tang Soo Do Alliance, and International Tang Soo Do Federation. He also holds ranks in several other styles in his search to be a well-rounded fighter. Ron has been married to Gaming Trend Editor, Laura Burke, for 21 years. They have three dogs - Pazuzu (Irish Terrier), Atë, and Calliope (both Australian Kelpie/Pit Bull mixes).
Related Articles: Doom Prima Guide
Share
Tweet
Share
Submit