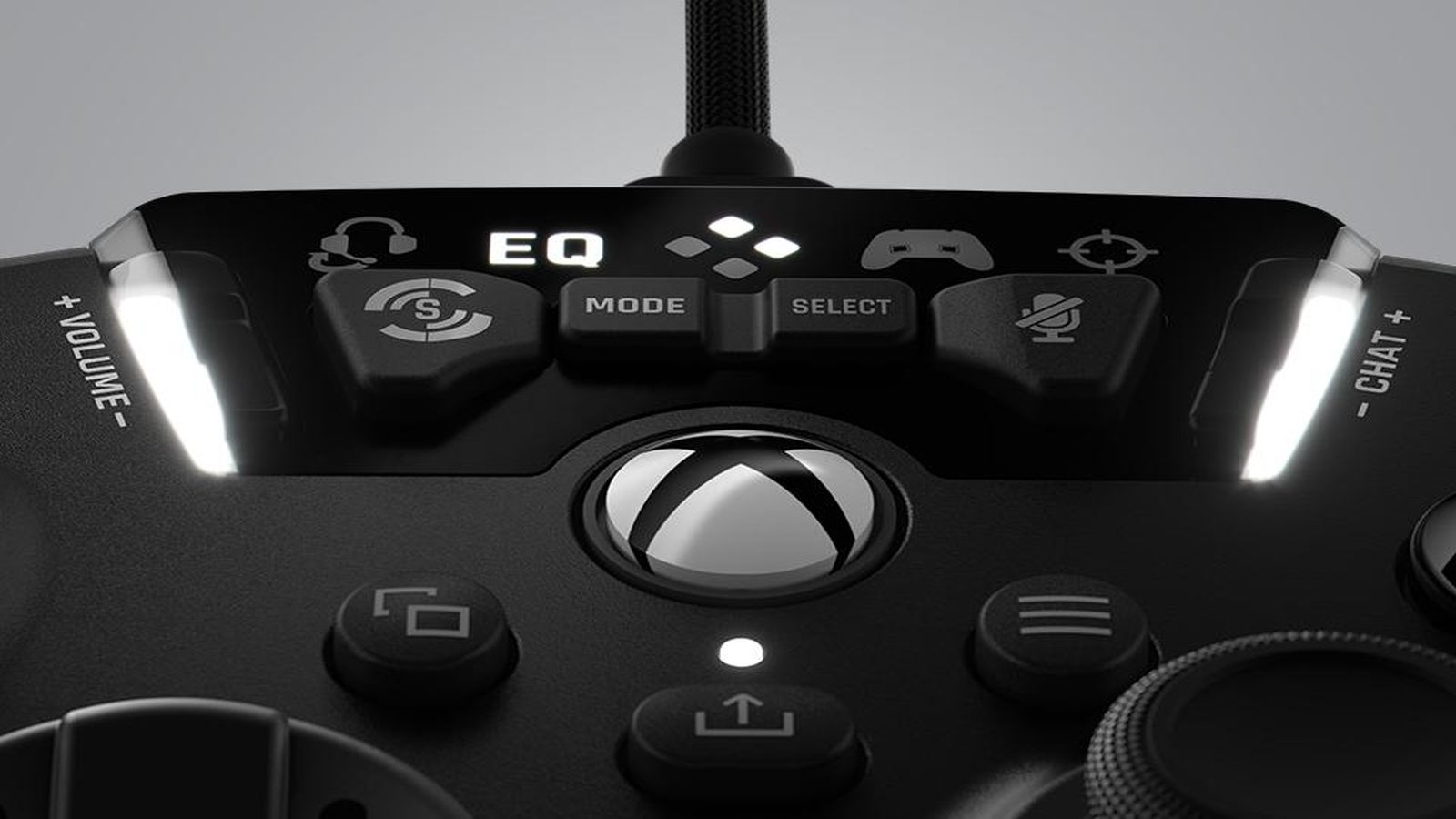 Once upon a time 3rd party controllers were how you gained an advantage over your friends. You’d give them some janky controller like this (here’s the back, if you think it can’t get worse) and you’d go to town on them in whatever game you’ve chosen. Well, thankfully some companies have figured this out and want to do better. Turtle Beach, powerhouses in the world of audio solutions, are trying their hand at seeing if they can break the curse of 3rd party controllers with their just-released Turtle Beach Recon Controller.

First and foremost, the Turtle Beach Recon Controller is a wired controller. That may or may not be a dealbreaker for you, but with a 10 foot braided cable you should be able to comfortably use it on your console. For PC, you’ll be sitting far closer, so the longer cord is beyond sufficient. I like wired controllers for my PC as I’ve got enough to tinker with without adding Bluetooth drivers, batteries, or dongles to the mix. Sometimes you just need something less fiddly.

There are a number of cool features available on the Recon, and some I’ve never seen on a controller before. In fact, the first I’ve actually never seen other than on high-end audio gear — the mic monitor. I use mic monitoring all the time when filming to ensure I’m hearing my interview subjects clearly, but here we see it baked into the controller directly. Even with Turtle Beach at the helm, I was surprised to see a microphone monitoring function baked into this controller. This function will punch up the volume up to four levels. Combined with the chat and volume rockers, you’ll be able to change the audio mix to your desired levels. Given how often chat gets drowned out by loud in-game music or noise, it’s great to be able to balance them out a bit.

I may be belaboring the audio controls on the Recon a little, but hear me out (and enjoy that pun). No matter how many little notches, nubs, lights, or other things companies put on their headsets, be it on the cans, earcups, or anywhere in between, figuring out how to adjust them on the fly can be problematic. Having them on the controller where you can visually see the status and adjust them means you can do it all at a glance.

There is another button on this controller that I was very happy to see — mute. Some headphones have simple mute functions, like the Recon Headset which mutes when you raise the microphone arm. Most, on the other hand, ask that you fumble around on the rear of the earcups to decipher some braille indicator that tells you that you’ve found the mute button. Here, it’s a clearly-labeled button marked “Mute”. No ambiguity, just a quick way to silence your microphone so you can cough, eat popcorn, or whatever else you might be doing that you don’t want to broadcast to your friends. 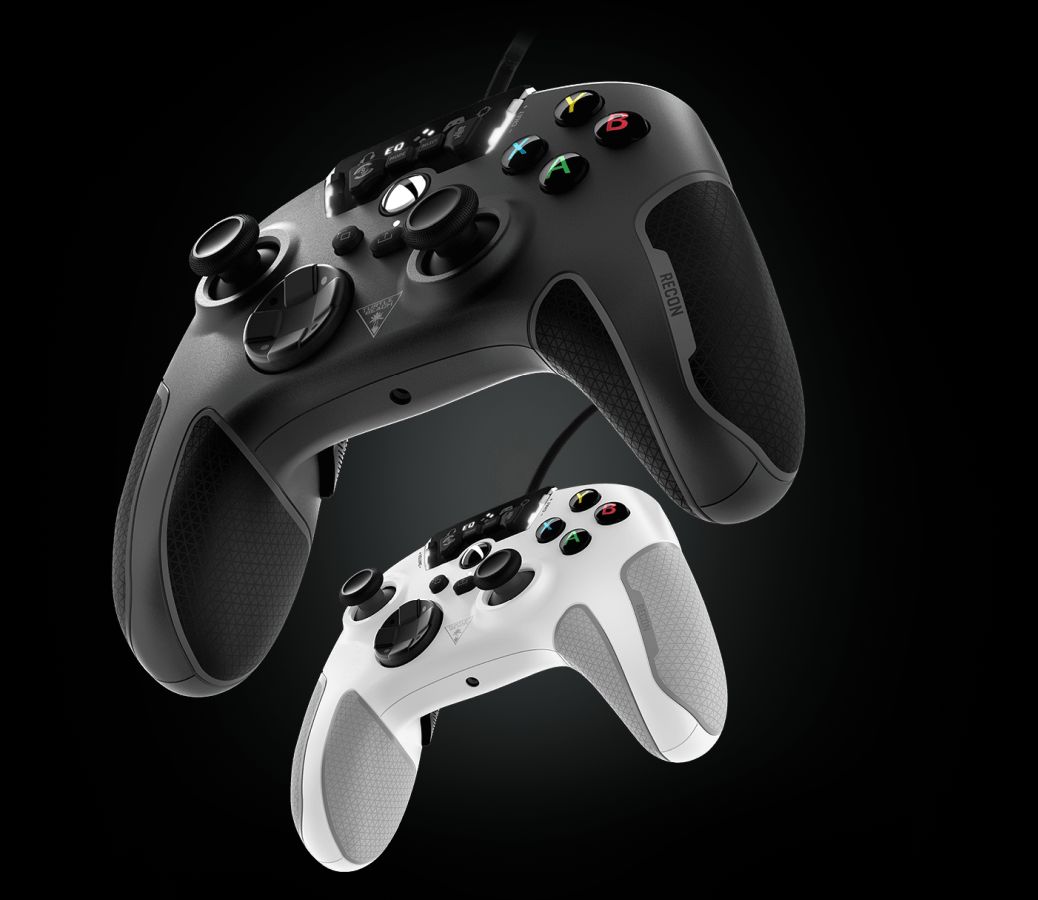 Much of the audio-enhancing capabilities of the Recon controller are largely dependent on what you plug into it. Cheaper headphones will benefit less from features like Superhuman Hearing’s audio-sharpening tech than audio powerhouses like the Turtle Beach Elite Pro 2. Similarly, punching up a cheap microphone is going to be less effective than that of the excellent pickup of the Elite Pro 2. Match your hardware and you’ll be happier for it, and you’ll have less of your friends saying you sound like a robot.
Triggers on the bottom of a controller are features normally reserved for “Elite” type controllers. On the bottom of the Recon, however, you’ll find two textured triggers on the bottom of the device. These can be mapped to duplicate any button press or function on the controller. Additionally, holding the left trigger enables “Pro Aim Focus Mode”. Pro Aim lowers the sensitivity of the right analog stick — the one you’d use for aiming in first person shooters. This allows you to take a more precise shot as your reticle won’t be whipping around the screen. There are four settings that coorespond with how intense the reduction is, so you can tune it to match your play style.

Beyond separate chat and volume control, the controller also has four EQ presets to tinker with, and the lights on the controller help you quickly see what mode you currently have selected. These can boost the bass, bass and treble together, “Signature sound” (read: Default), or Vocal Boost. As somebody who struggles with center channel voice due to hearing loss, I cannot express how much I appreciate the built in vocal boost.

We’ve seen Superhuman Hearing included on headsets before. Using a little algorithmic magic it increases the volume of subtle audio cues like leaves rustling or footsteps. It does change the audio mix slightly, but when having somebody sneak up on you would end poorly, it’s nice to be able to hear them coming.

The last major feature of the controller is the “Ergonomic cooling grips”. These rubber grips are intended to help you maintain your grip, while reducing the heat on the palm of your hands. I just don’t sweat like that so I’m not the intended audience. As such, the controller doesn’t slip in my hands, so it doesn’t do much for me.

The controller is available in two colors — black and white with grey accents. They’ll match your Xbox Series X or S model nicely. Both are priced at $59.99, meaning you aren’t paying a premium, despite the premium features on this controller. If you can tolerate a wire, and you are using 3.5mm headphones like the Elite Pro 2, then this controller is a perfect alternative to Microsoft’s first party controllers. I guess that third party curse is broken.

The Turtle Beach Recon replicates the feel of a first party controller, but with bonus features normally reserved for elite-level devices, as well as a few tricks all its own. While the wire is necessary to use some of those audio improvements, it feels like a small sacrifice for better voice and game audio balance.

Ron Burke is the Editor in Chief for Gaming Trend. Currently living in Fort Worth, Texas, Ron is an old-school gamer who enjoys CRPGs, action/adventure, platformers, music games, and has recently gotten into tabletop gaming. Ron is also a fourth degree black belt, with a Master's rank in Matsumura Seito Shōrin-ryū, Moo Duk Kwan Tang Soo Do, Universal Tang Soo Do Alliance, and International Tang Soo Do Federation. He also holds ranks in several other styles in his search to be a well-rounded fighter. Ron has been married to Gaming Trend Editor, Laura Burke, for 21 years. They have three dogs - Pazuzu (Irish Terrier), Atë, and Calliope (both Australian Kelpie/Pit Bull mixes).
Related Articles: Hardware, Turtle Beach Recon Controller
Share
Tweet
Share
Submit