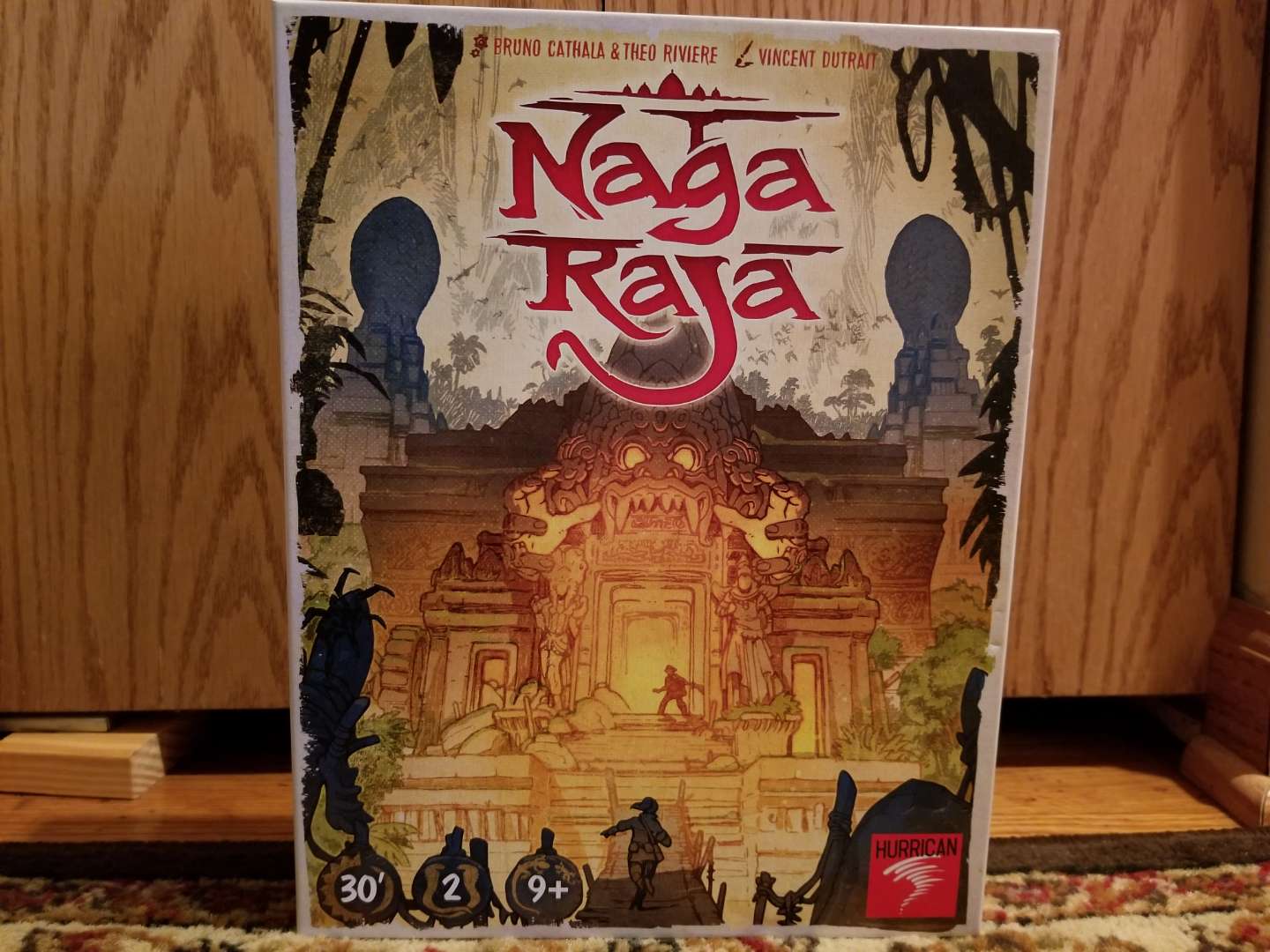 Have you ever wanted to explore ancient temples, avoid devious traps, and collect hidden treasure? What if there was a tabletop game based on similar ideas? Naga Raja answers that question and offers an enjoyable tabletop experience filled with luck, taking chances, unexpected changes, and conflict.

Naga Raja is a two player tabletop game where players are trying to collect relics from their personal temples. Each relic has a point value associated with it, and whoever earns 25 points first wins the game. There are two types of relics: regular relics and cursed relics. The regular ones are the ones you want to find, although they reward fewer points, while the cursed ones reward more points, but can cause you to lose. Each player has three cursed relics in their temple and if they reveal all three, they immediately lose the game. It’s harsh to have a way to fail instantly, but it adds more tension to the game and makes you more cautious.

Both players start by putting down their empty temple boards and randomly placing their nine relic tokens facedown next to the nine designated spots on their boards. It’s very important to not look at what relics are going where, otherwise the whole mystery of the game is ruined. I personally placed them facedown in the lid of the box, shuffled them around without looking, and then randomly grabbed and placed them. An alternative method could be placing the relics on each other’s boards without letting your friend peek. Next, shuffle the room tile pieces and place them in a pile facedown; then do the same with the amulet pieces and card deck. Set out the pile of fate sticks between both players, along with the trap tile. Finally, deal five cards to each player, and you’re ready to play. 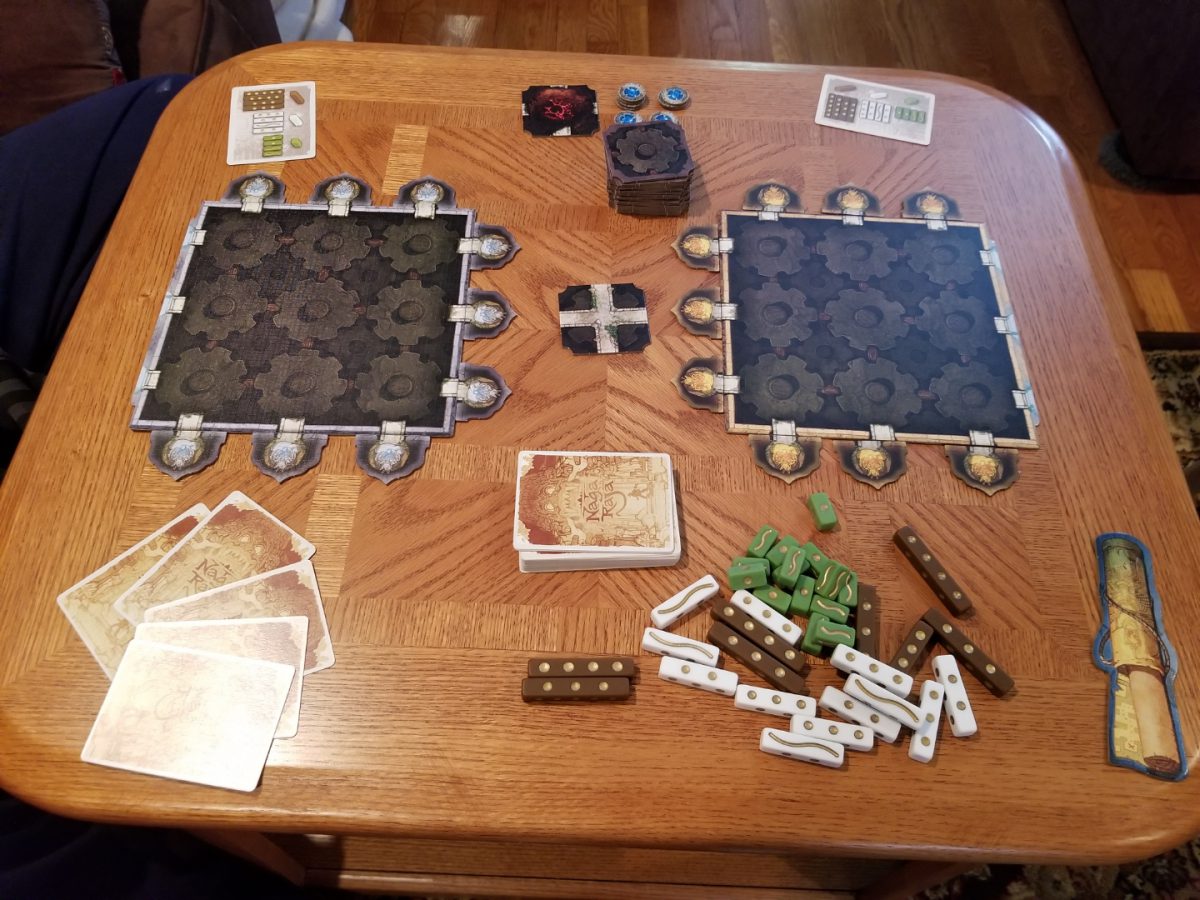 At the start of each round, you must flip the top room tile from the pile face-up. This tile is what both players are fighting for this round. There are variations of the rooms, but they are all made up of paths; some are four way intersections, others are only three way paths, and some have sections for amulets (which we’ll get back to later). These tiles are meant to help you create paths from your three temple entrances to as many of the relic locations as possible. Depending on your current setup, you may or may not want the specific tile that shows up.

The player who is designated the guide decides which of their cards they want to use first. You can use as many cards from your hand as you want in a turn as long as they have the same symbol in the top corner. After the guide chooses their cards, they lay them facedown, and the other player decides on their cards. When both players are ready, they flip their cards. Each card has fate sticks (brown, white, and green sticks) at the top. These designate what sticks and how many of each that you throw that turn. For example, if you play a card with two brown sticks and a second one with one brown stick and three green, then you throw three brown sticks and three green sticks that round. The sticks have dots that represent fate points, and lines that represent naga. After throwing, both players add up the amount of fate they got as a result. If neither player has any naga, the player with more fate wins the room tile.

If either player gets naga, this is where things get more interesting. Every card has an effect that can be activated by spending naga. You can only use the effects of cards in your hand, and every card costs one naga to use. Effects can target either you or your opponent, and be anything from swapping the places of relics within either player’s temple to adding fate to your total that round to removing sticks your opponent has thrown to reduce their total, and more. The guide gets to act first, followed by the second player. Once both players have passed or run out of naga, the fate total is calculated as mentioned earlier. 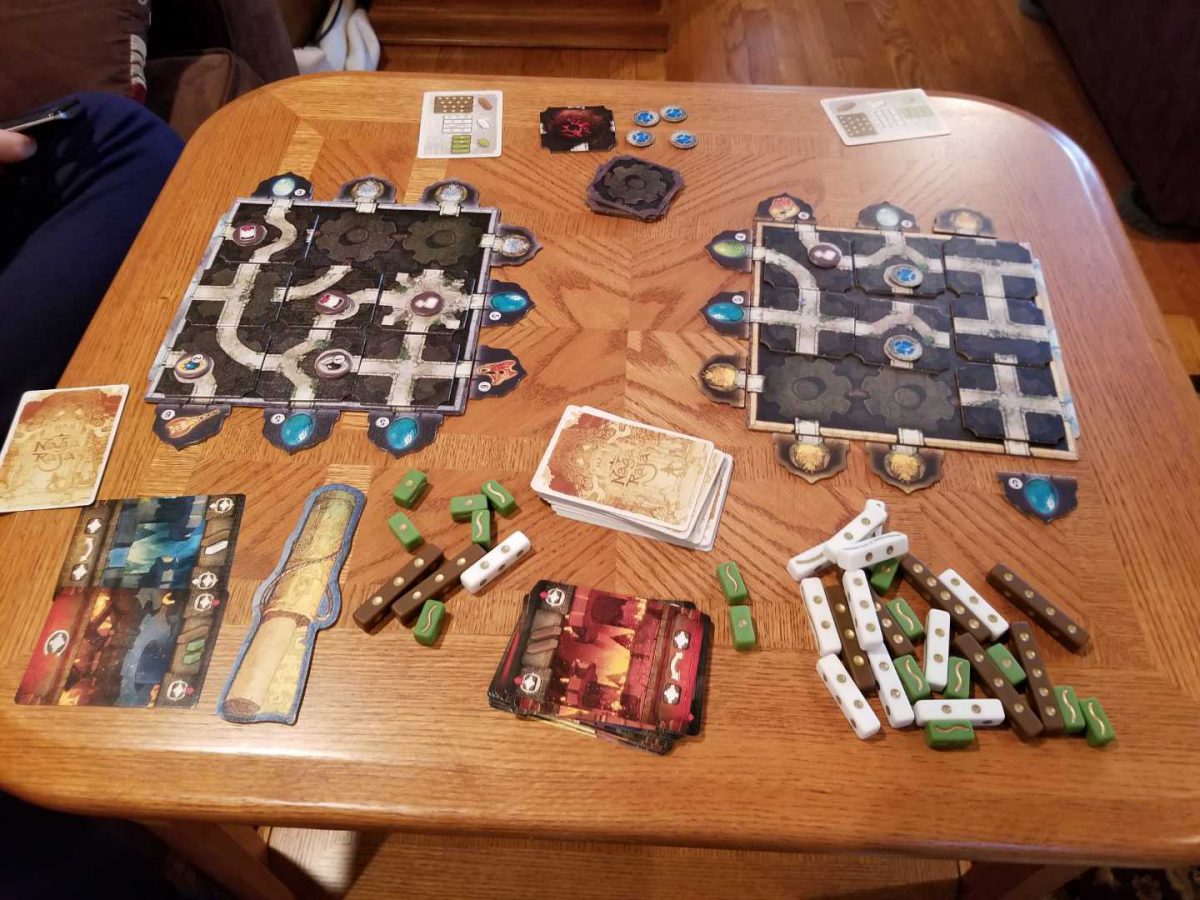 When a player wins a room, they place it into their temple, but it must be connected to an entrance on the first turn. Any rooms won later must be placed either next to a different entrance or an adjacent room tile. It represents you venturing into the temple and slowly discovering the rooms. I like that you have to build out from the entrances to start because it forces you to play as if you were really exploring without knowing future paths. Once the room is placed, the top tile of the room pile is flipped like before. The last step of the turn is unexpected, but I think it adds an interesting twist. The player who lost that round becomes the new guide, draws three cards, chooses two to keep, and gives the remaining one to their opponent. There are no regular draw phases, which is different, but it makes the game unique. After the cards are dealt, you repeat the aforementioned steps for the following rounds until a player earns 25 points or finds all three cursed relics.

When a path connects an entrance to a relic, that relic is flipped and that player earns the corresponding points on the piece. If for some reason a path is broken, then the relic is flipped facedown and the points are removed until the path is connected again. Paths can be broken due to card effects such as rotating or swapping two room tiles. These effects can be used to cut off access to an opponent’s relics or even fix a hindrance that your opponent has inflicted upon you. In terms of gameplay, it’s a nice way to mix things up and make things harder on your opponent. In terms of world-building, it follows the idea of a mystical temple changing its layout to stop the explorer. Another tile hindrance is the trap room. If a card effect calls for it, you grab the trap tile and put it in an empty spot in your opponent’s temple. Rooms can’t be placed over the trap, so you must either find a way around it or move it to your opponent’s board as a result of a card effect. 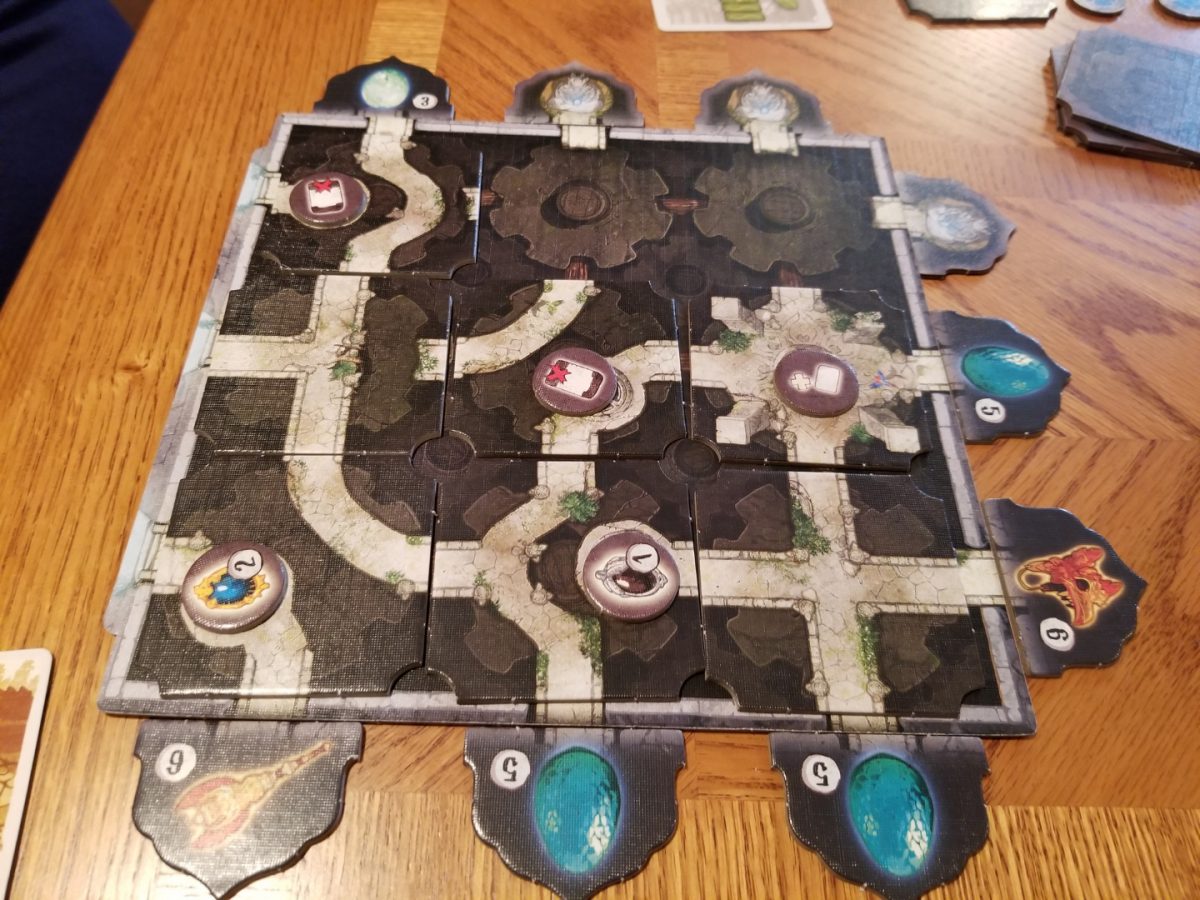 Now, back to the amulets that were mentioned earlier. When a room tile with an amulet section is placed, you randomly grab an amulet token and place it facedown in the designated spot. When a path connects an entrance to the amulet, then you can peek at it and leave it facedown. This keeps the amulet a mystery to your opponent, which can come in handy. Some amulets merely reward extra points towards your relic score, but others have the ability to negate a naga card that your opponent uses. To use the effect, you flip the amulet and negate the card; the amulet can only use this effect once, so choose your moment carefully.

Naga Raja is a game of planning, taking chances, and luck. Due to rounds revolving around the results of throwing fate sticks, using extra cards to turn the tide becomes crucial at times. Not knowing what your opponent may be planning or have up their sleeve keeps the game tense, which I didn’t expect at first with this game. It doesn’t take long to learn the rules or how to play, so people who hate complicated gameplay can rest easy. As for the design, I really like the ancient temple aesthetic and fate themes. Not only are there temples, relics, and amulets, but even the fate sticks fit the tone of the game perfectly. The box itself has slots that were designed to perfectly fit every single piece of the game after each use. No need for ziploc bags or anything, which is honestly a huge plus and amazing foresight. In the end, for those interested in a tabletop with an Indiana Jones type aesthetic combined with the luck of the throw and clever card usage, then Naga Raja is the game for you.

Naga Raja is a tabletop revolving around throwing fate sticks in order to earn rooms and explore their personal temples. Extra card effects can turn the tide of a round, so anything can happen. You win by either earning 25 points or by your opponent finding the three cursed relics. If you like ancient ruins and temple themes, you're in for a treat.

Codi loves to play video games and watch movies. He will watch almost any kind of movie just to experience them. His ideas take inspiration from the shows and movies he watches, and games he plays. He also loves a good pun.
Related Articles: Naga Raja
Share
Tweet
Share
Submit