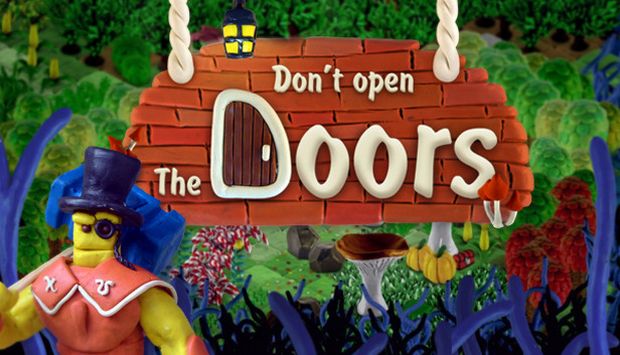 The claymation look of Don’t Open the Doors is a stark contrast to most modern games, It’s a new concept to many people who aren’t familiar with the history of claymation, so it lends an eye opener and a new experience to the world of computer generated images.
Don’t Open the Doors takes place in an appropriately colorful world, with blue trees, talking pumpkins and mushrooms, and popcorn guns. It looks like something straight out of a Lewis Carroll fever dream. Developer Anton Riot took full advantage of using colors and shapes to create a very memorable environment. The style is remarkable and hands down the game’s greatest strength.

The premise of the game describes a once peaceful land where all was perfect, until the titular doors suddenly appeared, which acted as portals to dangerous dimensions. Because of the mysterious arrival of these doors, the citizens of the land have to evacuate, thus driving the land into a state of turmoil. You play a citizen assigned to assist in the creation of the “megabomb,” a device designed to destroy the “main door” and bring balance back to your home. I’m a stickler for a good story, so realizing that this has what appears to be an intentionally messy story, perhaps piggybacking off the unpolished and messy look of a rudimentary clay sculpture. Were it intentional or not, it didn’t sit quite well with me. The dialogue was tough to read, and I sometimes found myself scanning more than reading in order to move on. Not all games require deep plots or hidden meanings to be good, but I felt that the incoherent story was a detriment to the experience.

Despite all the colorful-looking characters one encounters, none of them are particularly memorable. The purpose of the characters are either to barter with, take quests from, or annoy you with a string of journey stopping dialogue, sometimes intentionally, sometimes not.
That being said, as visually intriguing as the world was, I wasn’t a big fan of the diagonal grid in which the environment took place. Due to the mechanics, it took far too much time getting used to the would-be-simple arrow controls. Once I got the hang of walking diagonally for the majority of the game-play, it made traveling a little more bearable. Unfortunately, I died to a great deal of environmental hazards before I got used to simply walking around them.

The gameplay itself works as a sort-of quirky dungeon crawler, the doors being portals to strange Wonderland-like levels filled with rewards as well as hazards. As the title implies, don’t open the door unless you’re armed to the teeth, because once you enter, you can’t leave until you beat the level or die. However, death is not terribly consequential, as you tend to just reset outside the door. The game is kind in that you regain any ammunition (bullets, bombs) and health compotes that you had expended on that level. As someone who is not a fan of permadeath, this was a relief considering how many times I died fighting bouncing pumpkins and sharp shooting cacti.
The doors don’t seem to have a level assigned to them, not one that the player can see anyway. They’re either extremely difficult, or a breeze, but you won’t know until you open up. Sometimes, completing these levels will merit a skill upgrade. One may learn to swing a hammer better, utilize explosives, create healing compotes more efficiently, or develop the ability to use firearms, the last of those being especially useful considering the sheer amount of projectile flinging monsters there are in this game.

While visually appealing, the game ultimately falters due to schizophrenic difficulty and a story that’s hard to follow. The forgiving death mechanic made the uncertain levels bearable, but didn’t quite redeem them back to entertaining. As far as appearances go, it stood out as its own title, Don’t Open the Doors fell short in regards to story and gameplay.