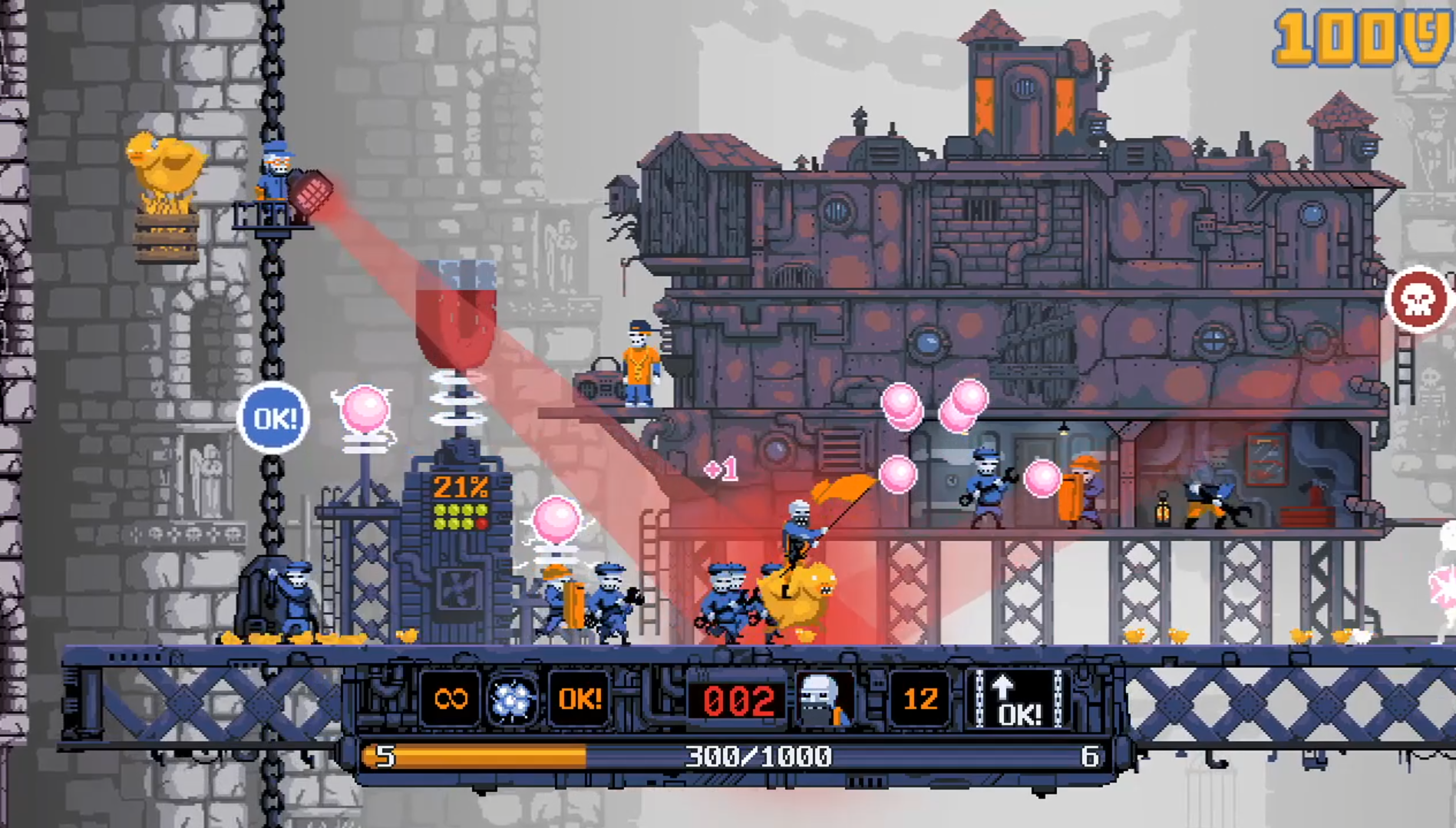 What happens when you die? Is there an afterlife or is there nothing? Well, for Vladimir, it looks like he’s got plenty of work to do. After dying, he is greeted by Death, who offers him a job in exchange for a less harsh afterlife. If Vladimir wants to avoid Hell and reside in Purgatory instead, he must hunt down and relocate some dangerous wayward souls to their correct destinations. This will be the time of his afterlife.

All of the action takes place on a single screen that you can move side to side on. This screen is an elevator that is powered by mechanics who must be working on the chain mechanisms in order for it to continue moving. These mechanics are part of your squad and are the key to progressing through the levels. As the elevator continues upwards, various foes will start hopping on and attacking you and your squad. It’s up to you and the fighters in your crew to beat them down and protect the mechanics. 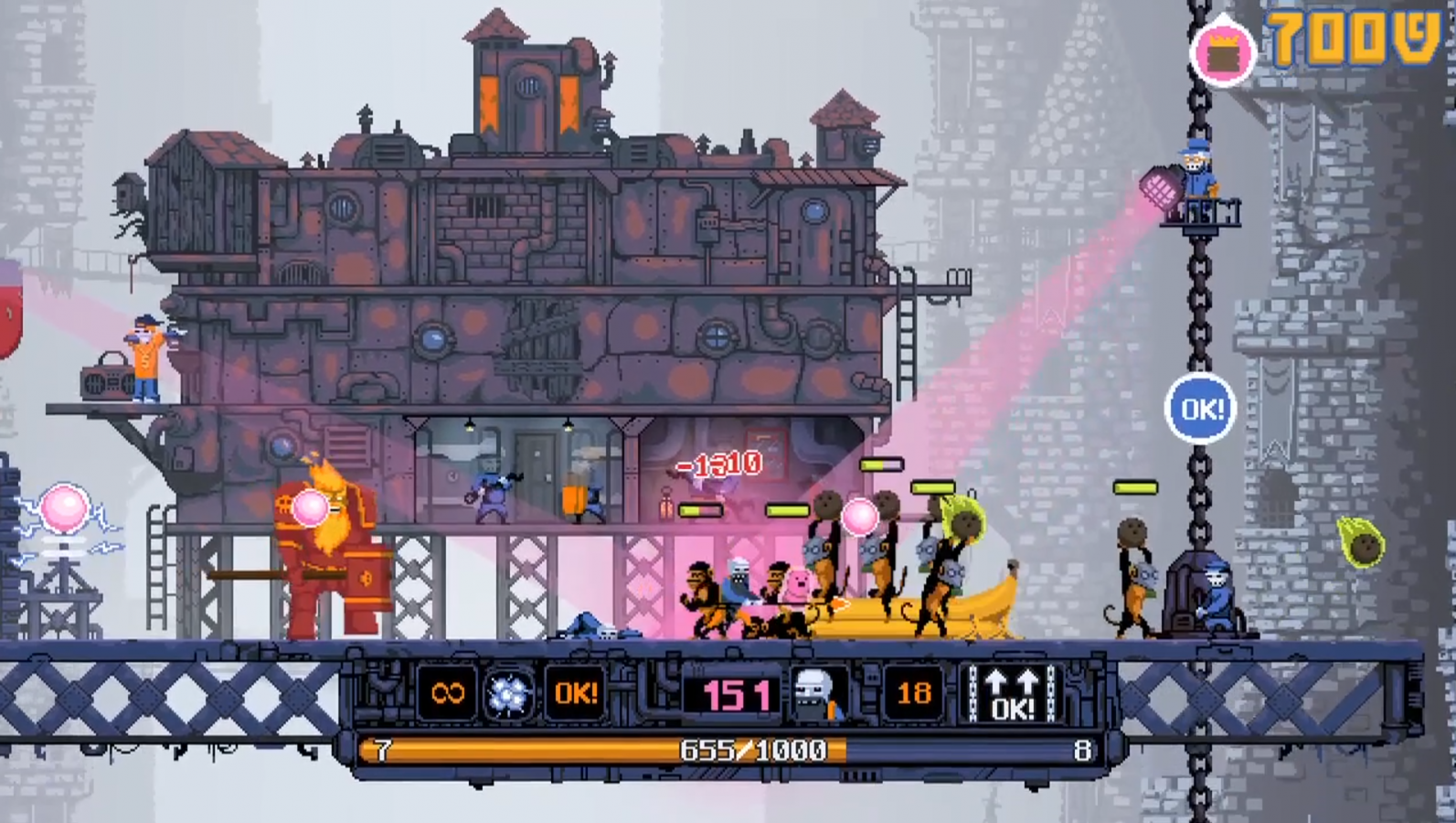 Combat comes down to a regular slashing attack, a dodging dash, and a special ability move. As you fight, crates will spawn in or be dropped by flying chicks. Destroying these crates typically offer one of many special abilities for you to pick up. You can save these for later use and cycle through them at any time during combat. These abilities include moves such as temporary invincibility, a giant wrench that slams down on foes, letting you ride a chicken that turns some foes into chicks, and a flying taxi that comes crashing through enemies. There are plenty of other moves, but those were just a few.

You have a number near the bottom of the screen that represents your health. The only way to heal is by picking up pink orbs that drop after you defeat enemies. They heal very little health, so don’t expect them to be your saving grace. The enemies do more damage than any one orb can heal. As expected, when your health hits zero, you die. Thankfully, you have four resurrections that you can take advantage of before you die for good. Using a resurrection allows you to restart the current stage instead of starting from the last checkpoint stage. This helps out a lot and reduces the amount of time spent having to replay through levels and fights. 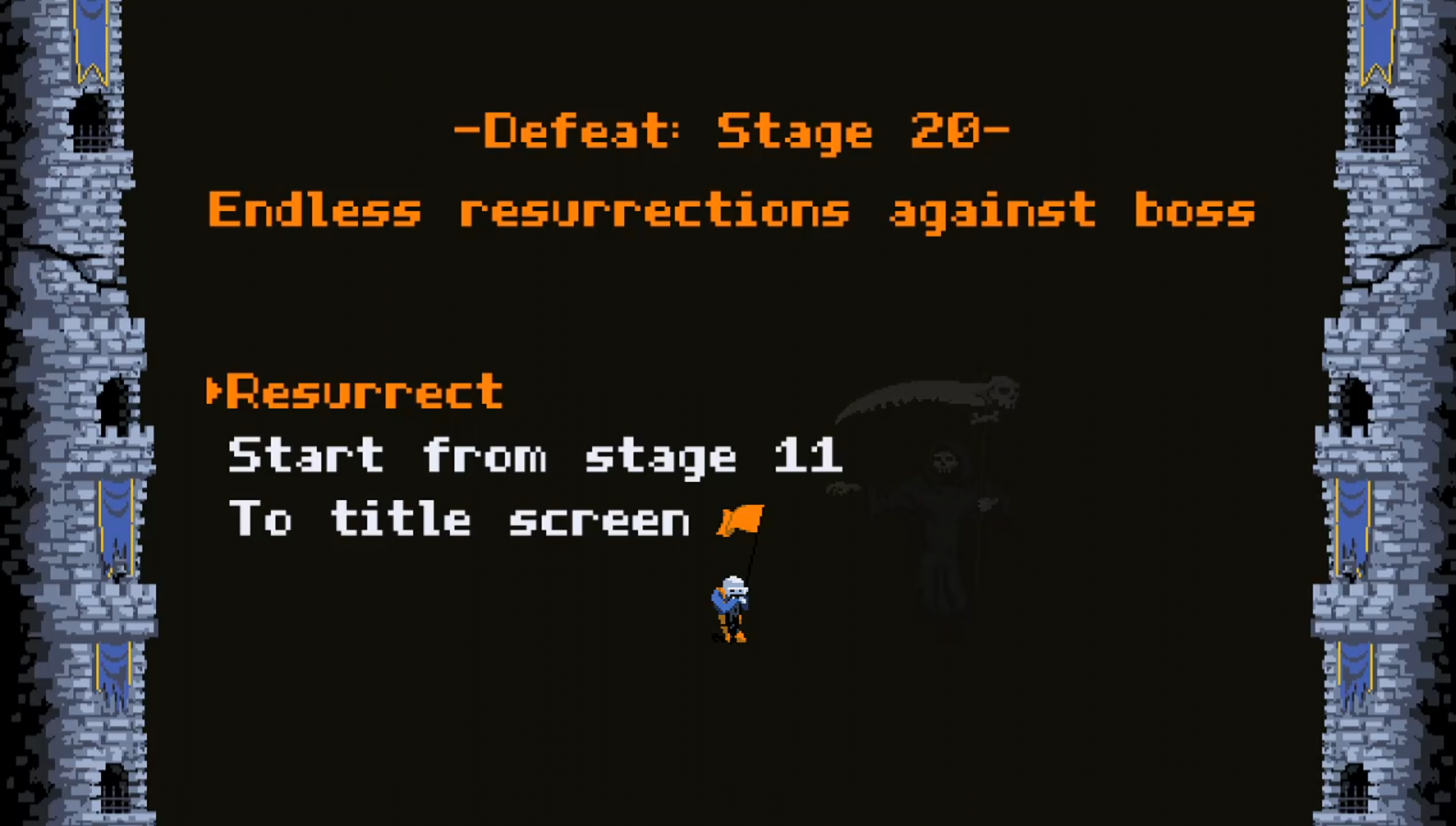 While fighting, you have a squad of undead who will fight by your side and help you out. You start off with a small group, but as you fight and level up, the maximum size of your crew will grow. When a squad member dies, they will respawn after a short time. Every member of your crew is represented by a version of themselves in the background behind the stage. They are faded when out or dead and will slowly regain their color to signify the respawn. It’s a clever little gimmick that I like. Members of your crew include mechanics, thugs, defenders, and much more.

As mentioned earlier, you level up, and you do so by collecting chicks that drop from foes. Each time you level up, you earn Vladcoins that can be spent to upgrade your abilities or stats. You can improve things such as movement speed, attack speed, max health, max resurrection count, and more. These stat improvements will make it easier for you to survive and complete your mission, although you won’t be able to buy many upgrades at once unless you save up a lot. 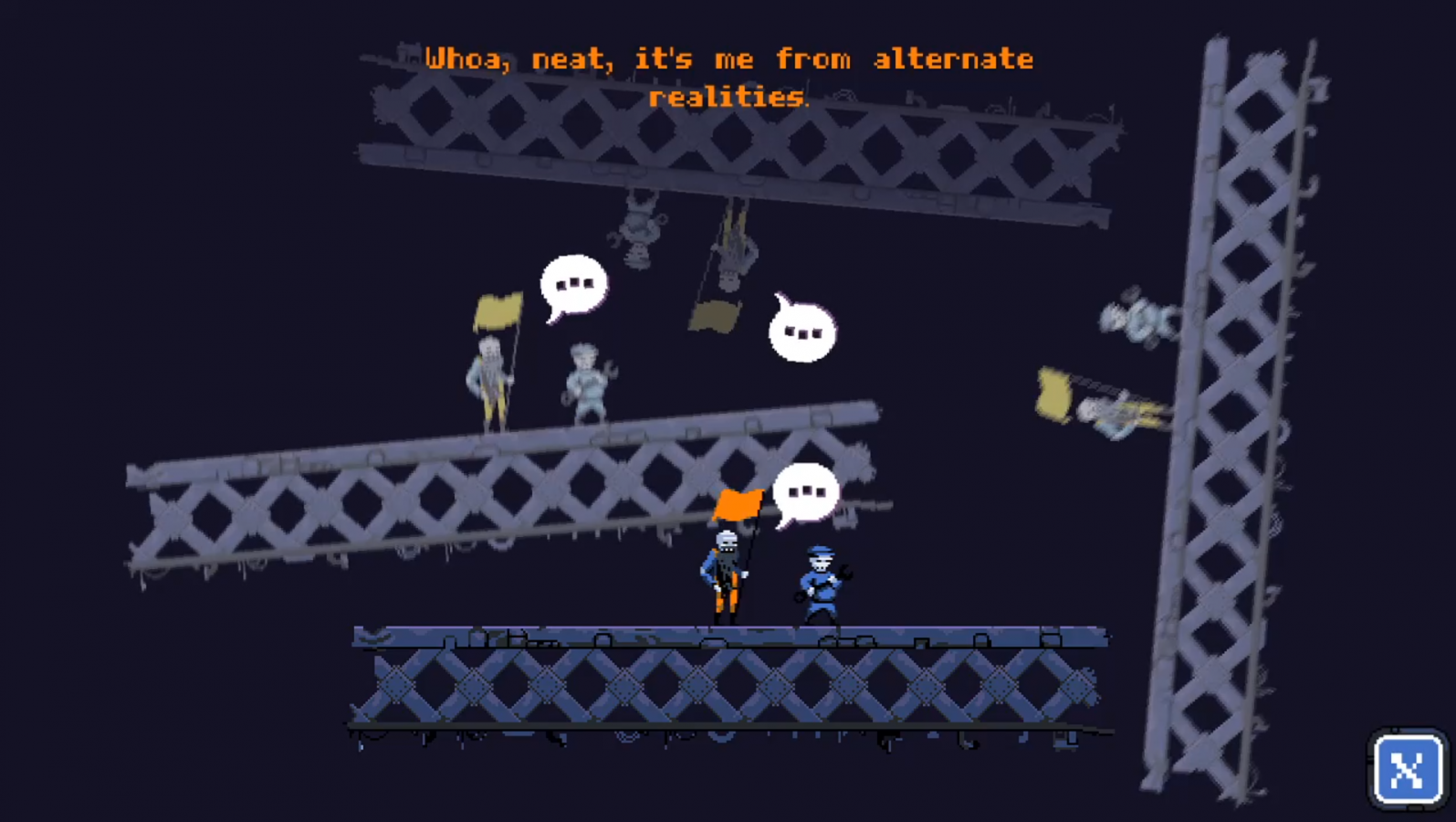 In terms of difficulty, the game isn’t too tough, but that doesn’t mean you can take it easy. You still need to be careful because enemies can still gang up on you and wreck you. Bosses do more devastating hits, so you need to be especially careful when facing them. The soundtrack is wacky and rockin’, while the visuals are colorful and zany. The humor in the game is charming and goofy, which makes the snippets of story that you get more interesting. All in all, Draw Chilly is a fun 2D hack n’ slash game with wacky antics and combat. It may not be perfect, but it still offers hours of enjoyment nonetheless.

Draw Chilly is a 2D hack n'slash game that focuses on one man's mission to redirect wayward souls. With the help of an undead squad, a deadly weapon, and crazy abilities, Vladimir will earn his place in Purgatory. Some enemies and bosses are tough, but if you act carefully, you'll make it through.

Codi loves to play video games and watch movies. He will watch almost any kind of movie just to experience them. His ideas take inspiration from the shows and movies he watches, and games he plays. He also loves a good pun.
Related Articles: Draw Chilly
Share
Tweet
Share
Submit