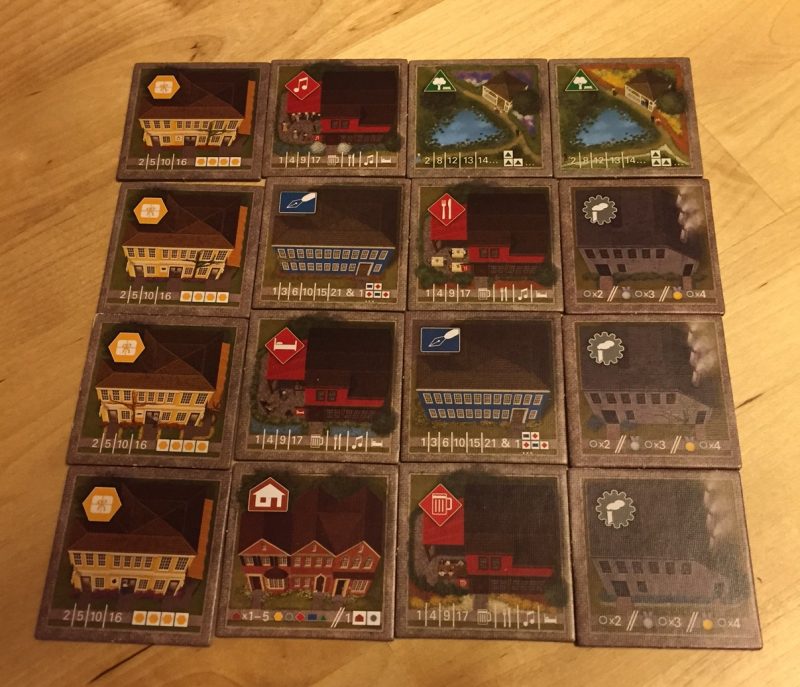 Let’s just get this out of the way right now: the title Between Two Cities makes punishingly little sense. What does it mean? What’s between two cities? Suburbs? Country? Like, a road? Is the game trying to call itself “A Road” but can’t think of the name and is like, “ah, it’s that thing, you know, what’s the word, it’s the thing between two cities? Eh, let’s just go with that.” All that’s between two cities during actual gameplay are players. Are we to assume this game is named after the abstract concept of being personally located between two cities, as though that’s an inherently engaging place to be? As though we all treasure our childhood memories of inter-city road trips in the backseat of the family car going like “oh dang, ma, I do declare we are between two cities, prepare for the dankest hype.”

The title doesn’t help a game that’s already hard to pitch. “You build two cities,” you say to skeptical friends. “You gotta draft, like, sets of buildings.” Eyebrows get raised. They’ve played games where they collect sets before. What’s this game got that’s so special? It’s hard to say. They sit down, ready for disappointment. But once they start playing, something unexpected happens. The skepticism melts away and it just clicks.

I dare you to have a bad time with Between Two Cities by Ben Rosset and Matthew O’Malley and published by Stonemeier Games. I don’t think you can. You might not be blown away, but you won’t regret having played it. This game is simple and fast, but that doesn’t fully describe just how streamlined Between Two Cities is. There is not one second of wasted time in this game. The design is pared down to a startling purity, with any ancillary nonsense carved away. You’re left with this elemental core of distilled game, and guys, it’s really fun.

The object of the game is to build two cities, one a collaborative affair with the player to your left, the other with the player to your right. Final scoring only counts the lower-scoring city you helped to build, so it behooves you to ensure each city you build is just as good as the other. In practice, you grab a handful of tiles and pick two. Everyone reveals their chosen tiles simultaneously and places one in each of the two cities they’re building, each city forming a 4-by-4 tile grid. Pick up the leftover tiles and repeat. I’m omitting some of the structure, but that’s basically it.

Your standard city in Between Two Cities. Not much to look at, to be sure, but it gets the job done.

The building types score points in thematic, easy-to-understand ways. Shops score more when arranged in long, unbroken commercial districts. Parks want to be in small, modest clumps. Taverns shine when multiple specializations (bar, music venue, restaurant, etc.) are in the same town. Offices care only about bulk, not placement—except if they’re next to a tavern, gaining you a bonus point as workers grab a drink after quitting time. Each factory grows in value the more industrially dominant a city is, and houses thrive in a well-rounded city with all building types—but no one wants to live next to a factory.

Each of the six building types. They each feature a reminder of how they score points. You’ll learn to understand the iconography in only a few minutes.

Between Two Cities has no fluff, no gimmick. The building types are simple, and their scoring is easy to grasp. Collecting sets of buildings is intuitive from turn one. Play is simultaneous and a turn takes seconds. This is set collection boiled down to a molasses-thick syrup. It’s great. But.

The issue with such a streamlined, no-nonsense game is that there’s nothing under the hood, so to speak. It’s set collection with tiles, and that’s it. You’re going to make a line of shops every time. You’re going to specialize in factories or ignore them entirely for more profitable tiles. There’s no strategic depth beyond what you’ll grasp immediately, and it doesn’t seem like it stands up to repeated plays.

Except that, weirdly, Between Two Cities does.

It’s still not exceptionally deep, but the part of the game I was most ready to dismiss before playing—the fact that you’re building two simultaneous cities—is its saving grace. I assumed splitting your attentions between two cities would be an afterthought, as everyone always plays the best tile for that city. But in practice, having to consider two cities with two different situations adds the spice that gives the game its soul. You form a bond with the players to either side of you as they lay down the perfect tiles to make your cities soar, but cringe as they do the same to their other cities, scoring mega points for some chump who isn’t even you. You worry about whether one of your cities is pulling too far ahead of the other, tempting you to play sub-optimally there to even out the score—remember, you’re only judged on the lower-scoring of your two cities. You might be the genius who built Paris, the timeless City Of Lights, but no one cares if you also built Trashtown USA, Home Of The World’s Backed-Uppiest Toilets.

These little city-meeples mark which city is which on the table and on the scoreboard. They implicitly declare that your cities are among the world’s best—Rome, Paris—and also, inexplicably, St. Louis.

The components are the kind of high-quality stuff Stonemeier Games usually puts out, if a bit drab. Though it boggles the mind why the scoreboard is so absurdly huge. Thing is like a million miles long. You literally only use it once and only after the game is finished, yet the manual demands you set it up in the middle of the table during gameplay for some reason, as if someone responsible for the production of this game hates efficient use of table space. Leave the scoreboard in the box until you need it.

WHAT IS THIS ENORMOUS NONSENSE

Overall, though, Between Two Cities? If you want to entertain seven people for twenty minutes with an unobjectionable game they’ll learn in five minutes (and who doesn’t, from time to time), it’ll do the job just fine.

Between Two Cities is a game without a lot of flash or depth, but the core experience it offers is going to make players smile every time. It distills the core of what’s engaging about collecting sets of tiles and marries it to an interesting twist of building two cities. The wide-ranging player count and quick playtime make it a deeply versatile game that nearly any group will like having around, even if it’s no one’s favorite.