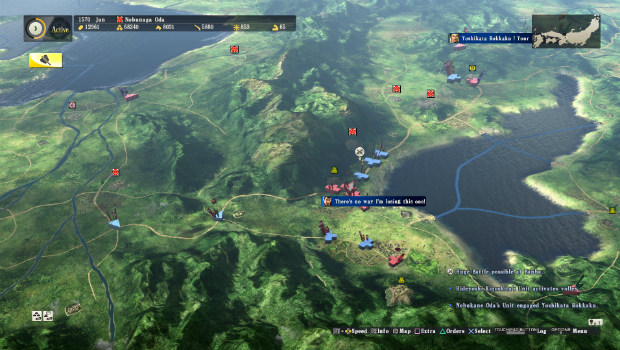 I’ve been doing this reviewing gig for a while now, but never before have I been faced with such a difficult judgement as the one I have to give to Nobunaga’s Ambition: Sphere of Influence – Ascension.  There is so much wonderful detail in this game that brings a built kingdom to life.  From a God’s eye view of Japan, down to the individual battlefields of a great war, this game spares not a single inch of wonderful details throughout.

However, the experience abandons any hope in explaining what the hell is going on, and how to actually play the game in any recognizable fashion. A huge crater in Nobunaga’s Ambition is that the ambition is implied; with games like these, I like a little hand-holding, but here it outright lops the appendage off with a daikatana and says, “Get along then, solider.” Impossible to figure out, and skimpy of anything resembling guidance, Nobunaga’s Ambition: Sphere of Influence – Ascension is an enigmatic nightmare that will mesmerize you with its charms and then hurl you against the rocks, Odyssey style.

Nobunaga’s Ambition is a simulator/world building game that reminds me of the Tropico series, with the largest difference being a focus of real world Japanese historical events.  It has existed since the dawn of video gaming itself, with this being its latest incarnation. Depending on the level of play you choose, you can shape events in Japanese history to your liking and witness the eventual aftermath in incredible detail.

You’ll have several scenarios available to you, each starting at a different time period, and some depicting real world or fictional events from the Sengoku and Warring States era to drive the story forward.  As someone who knows nothing about Japanese history, the mostly realistic nature of the game was very interesting to me.

The selection also gives you the character you play as with a rank given.  Each rank, from retainer up to lord or Daimyo, provides a different set of responsibilities and skills.  Because this game is incredibly complex, starting mostly as a retainer is very much suggested, doubly due to the lack of instruction given.  As a retainer, you will basically be tending to a village or town, compelling workers to create food and supplies for your lord.

As you move up the ranks, you begin to take on new tasks, such as army building, castle conquest, and eventually, controlling all of the aspects of the Kingdom. In short, you are compelled by no man, compelling to all.  At the level of Daimyo you can wage war, dominate new territory and attempt to conquer and unify all of Japan.  All of this seems to work just fine, and it’s hard to gripe about the flow of game mechanics in any fashion.  I just don’t have any clue how to use most of the functions outside of the wars.

The war sections are particularly fun, where you can control from afar or down close on the battlefield, with full battle detail (to an extent) and easy to learn controls.  This isn’t just a simple “pieces on a map fighting” type of skirmish, but a simulation that spans over bridges and through walls, where you have to be strategic with things that aren’t just placement and power.  Warring with other opponents is by far the most accessible mode of the game, straightforward, and well explained in the tutorial.

However, that is the only thing that is well explained here.  I played the tutorial a dozen times, each time feeling confident about how to play, and then going into an actual game and being absolutely lost.  There is so much detail and complexity in this game that when you attempt to actually delve in, you’ll find yourself just staring at the screen, wondering how to even start the task at hand.

The tutorial is actually pretty lengthy, clocking in at about 25 minutes or so.  I’d suggest they should have made this a 6-8 hour tutorial. This might sound horrible, except it’s 100% optional, and the existing tutorial gives the option of jumping in at different moments, so they could have done the same with a much longer tutorial.

Counter-intuitive?  Sure, but while most games suffer from tutorials that drag on forever, Nobunaga’s Ambition suffers from the opposite.  Despite the length, the wildly vast options available to you stand out as you breeze through one or two tasks at each level.  It feels like important details are left to chance, which makes the tutorial feel rushed, leaving you wanting a bit more explanation.

Fans of the series, and of the genre itself will probably have less of a problem with adjusting to the experience than someone who is not so seasoned.  Also, a buffet of explanation videos, playthroughs, and other media is available online that can get you up to speed quickly, but that doesn’t get the game off the hook for just leaving the player flapping in a brisk wind.

I wanted to try to learn how to play this game simply by playing the game, and I have still not been able to creak into functionality.

Combine the lack of instruction with a camera and movement system that is only a few steps above broken, and you’ve got a real cauldron for rage going.  The camera has this weird bird’s eye view that centers focus always at a distance.  The zooming is erratic and movements can be blocked, interrupted, or go haywire depending on the topography around you.  It just doesn’t work right.

There is still much to enjoy, of course. The game is well put together, has a deep trove of historical events to play through, and allows you the chance to rule over the the entire nation of Japan, with a massive game world.  You will scroll forever to get from one end of the country to the other, and the waterways, mountains, and other natural features serve to aid and hinder your campaigns in very unique fashions. Whereas other games would allow you to change the landscape, this game uses the country’s true landscape as a game board of sorts, to brilliant effect.

I thought graphically the game was impressive considering the scale from up high down to the ground level.  Not everything is perfect, but the visuals are clean, the colors are bright, and the designs of the towns, buildings, and other features are all distinctly Japanese.  The sound was serviceable, but predictable, and the music is likewise unremarkable. To cap it off, we have ugly and hard to navigate menus, and text so small and out of place that it can be easily missed at times. After some time, you’d get used to all the symbols and where things are, but that would take more than a few long playthroughs to adapt to and in the meantime you’re stuck pecking around for the right option.

Nobunaga’s Ambition: Sphere of Influence - Ascension is a very deep, complex, and well made game with high quality experiences from the lowest to the highest level of rule in Feudal Japan.  It is also a tease, showing you all of this quality without taking the time to actually explain itself. Frustrating camera controls and a total lack of guidance leave a bad taste in the mouth when the game so easily could have avoided both and been truly great.

Patrick Rost has been with Gaming Trend since 2013. At first focused on sports coverage, Patrick has gone on to cover a wide range of games and other products for the website. Outside of Gaming Trend, Patrick writes and records music, grinds perpetually in Elder Scrolls Online (PS4), and lives day to day with his two dogs, Bob and Stella.
Related Articles: Nobunaga's Ambition: Sphere of Influence - Ascension
Share
Tweet
Share
Submit