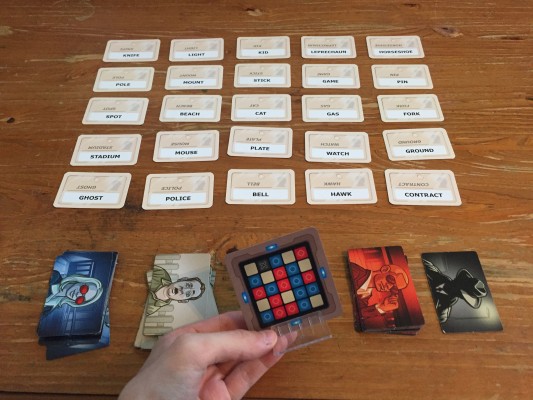 As a rule, I’m suspicious of tabletop game reviews. I get that we want to proselytize for our hobby, but the cost is a hyperbolic review cycle that tells gamers that there are dozens, even hundreds of “must-play” titles releasing all the time, even as the number of hours in a day remains an anemic 24. Every game seems to come with furious hype and breathless acclaim, even though it’s all but impossible for every hot new game to bring the transcendent gaming experiences to merit their praise. It’s hard to know what’s really worth your time and money, what’s an interesting novelty and what’s an enduring piece of great art, a distinction that a review cycle is supposed to make.

I am taking pains to explain this so that you understand the gravity of what I’m about to say.

Codenames, Vlaada Chvátil’s new word game for two to eight players, is a perfect ten, a titan standing head and shoulders above the rest of the scene. Codenames is an instant classic, a game of stunning elegance and endless fun. You need to own it. It leaves so many other titles sputtering in its dust. It’s on a level of excellence rarely achieved in any artistic medium. I love Codenames.

Playing Codenames is like seeing The Godfather or Star Wars or Pulp Fiction for the first time. It’s an experience where midway through you take a small moment to turn back into yourself and realize “Oh, wow. This is special. This is important. This is going to last forever.”

Codenames presents two teams with a grid of 25 words. Each team has a captain, or “spymaster,” who knows via a secret keycard which words correspond with their team.

On a team’s turn, all the spymaster has to do is tell their team which words are theirs. Simple! Then, their team guesses words from the grid, one-by-one. Each word is covered with a card that represents its true color as soon as it is guessed. Guess a word not of your team’s color and your turn ends immediately. A team wins when all of their words are covered with cards of their color. Easy! Surely this is a breezy and mellow game.

Ha ha! I have tricked you! It is not. Remember when I said that the spymaster’s job is to “tell their team which words are theirs?” I may have glossed over what “tell” means. All the spymaster can say is one word (which is related to the words they want their team to guess) and one number (the number of words related to the clue. The maximum amount of guesses on a turn is one higher than this number). That’s it. No follow-up clarifications allowed. No body language. No facial expression. No “this one’s wacky, you guys.” One word. One number. “Affluent three,” or “Tropical two,” or “Schrodinger four.” Yeah, it’s tough. Better not give a clue that might make your team pick an opponent’s word, as that lets them cover it with their color, making their victory that much easier.

There’s also one black word that makes your team instantly lose when chosen, so you really want to be careful with your clues.

Blue team victory! All nine of their tiles are covering their words.

Don’t be fooled into thinking that the instant-loss assassin word makes the game random or capricious. It’s a crucial game mechanism that keeps spymasters on their toes and guessers from choosing words at random. Every clue given has to be deliberately crafted to avoid the black word. Guesses must be reasoned and cautious to avoid instant death. It adds thick layers of tension and strategy with one swift stroke. And when a team chooses it, the table will go absolutely nuts.

So why is this dinky word game so great? Why a perfect ten? Seems pretty simple, like some kinda minesweeper with words! Good questions, all. Here is why.

It fosters and rewards creativity. The heart of the game is finding a way to communicate a creative solution to an impossible problem. As a spymaster, you need to be able to find ways to connect crazily disparate concepts while excluding unwanted words. You need to know your team, understand the connections they make, and predict what they’ll guess you’re thinking. How do you connect “band” and “day?” Me, I said “Time two,” because “The Time” is a band that is led by vocalist Morris Day. I didn’t consider whether my team would get that (they didn’t), but hey, it was exhilarating to make the connection. To rack my brain and actually come up with something wholly my own. I’m not relying on jokes pre-printed on cards. The game provides you with as little as possible. The rest is up to you.

It’s hilarious, and all the hilarity comes from the players. None of the words in Codenames are jokes or memes. But oh man, the conversations the teams will have as they try to parse the clues will slay you.

Case in point: I once gave the clue “Edible three” in the hopes my team would guess octopus, duck, and date. My team, lovable morons all, had a five minute conversation about whether or not robins were edible. My brother gave the clue “Monarch two” so his team would guess princess and state, and after an intense debate they went with worm. It was a thing of beauty.

The rule that a spymaster must keep a poker face seems a weird one, but it’s key for two reasons: one is the obvious need to not give hints with their expressions, but the other is because it is deeply, deeply funny to see people go bug-eyed and white knuckled, or hide their faces behind their hands as their team talks themselves into making truly doofus-level guesses.

The design is almost perfectly elegant. This is a big deal.

Not a single element of Codenames could be removed. Remove the instant-lose word, and there’s little consequence to guessing randomly, especially near the end of the game when there are very few words left. Remove the ability to guess one more word than the number the spymaster says, and you aren’t able to catch up by guessing words you missed earlier. Remove the race-to-the-finish competition with the opposing team and there’s no incentive to go big and try for ambitious four- or five-word clues. Remove the sand timer that you can flip whenever you feel someone is taking too long, and you lose a simple way to make sure the game moves at a clip the group is comfortable with.

At the same time, nothing could be added. It’s all there—words, restrictions, colors. That’s all you need. The game is a skeleton, a frame. It asks to be filled with your brilliance, your creativity, your humor. And it makes a beautiful whole when it comes together.

It appeals to everyone. The rules take two minutes to explain. The simplicity and universality of a word-game will hook non-gamers. Its party-game hilarity makes every turn a delight. The depth and skill that it requires will entrance hardcore gamers. The fact that the aforementioned “depth and skill” comes from general creativity and not action optimization will keep non-gamers from being blown away by experienced opponents. If being spymaster sounds like too much pressure, you don’t have to do it.

It takes about ten minutes to play. You can drop in and out of teams whenever you want with no real consequence, as long as each spymaster has at least one team member to guess. The tension and drama are high, but the stakes are low. If you blow it, who cares? It was funny, let’s play again. If you nail it, holy crap, you’re amazing and have an achievement you’ll talk about for days. Let’s play again.

The shadowy face of an instant loss. Do not guess the black word.

The rules are malleable. The arbiter for whether a clue is legal is the opposing spymaster. The rulebook allows you to be as strict or as loose as you want, even up to allowing multiple words in a clue to describe proper nouns (“Joan of Arc two,” “Game of Thrones three”). The box says the game goes up to eight players, but there’s really no upper limit to how big the teams can get. If you prefer to allow spymasters to emote more, do it. All Codenames wants you to do is have a great time, and it will let you.

It’s endlessly replayable. The game comes with hundreds of words. There are already apps that randomize the distribution of colors (including an official one). You can add whatever words you want just by writing them on slips of paper. Any game that has cards with words on them can expand Codenames. Even the same grid of words plays extremely differently when the keycard changes. Having king, queen, princess and crown on the board could be a breeze, or a hell of a challenge if your words are king and princess, but queen is the instant-lose word.

One thing about board games that makes them hard to review is how they, unlike any other art form, require the participation of others to be experienced. A review is inherently one person’s opinion, but every time a board game is played, multiple people are experiencing it, and each of them is forging their own opinion. Who’s to say the reviewer’s opinion isn’t an outlier?

Here’s the thing: every single person I’ve played Codenames with has liked it and asked to play again. Two have pre-ordered their own copies. As I write this, I have just returned from a party where I was specifically asked “bring Codenames,” at which all players loved it. One asked where they could buy a copy. Even if my opinion is some dumb madman’s yawp, it’s hard to deny a game that inspires so much joy in so many people.

Everyone likes Codenames because it is the best. Vlaada Chvátil has perhaps the single greatest résumé of any game designer on the planet (Through the Ages, Galaxy Trucker, Space Alert, Mage Knight, et al), and I wouldn’t hesitate to call Codenames his masterpiece.

So what if the spy theme is nonexistent and the two-player variant seems tepid? Codenames belongs in every collection, even if it’s a collection of one.

Codenames is brilliant, elegant, and captivates all players. Vlaada Chvátil once again proves himself to be one of tabletop gaming’s elite designers with this masterful party game that will bring a smile to everyone’s face.