Square Enix has used the Final Fantasy brand to test the waters with initially unrelated games outside of Japan. While the Mana series originates more directly from FF (subtitled Final Fantasy Gaiden in Japan), SaGa took a bit longer to ditch the moniker. The first three games all made their way over here as Final Fantasy Legend. Now SaGa’s original GameBoy trilogy has been rereleased on Switch as Collection of SaGa Final Fantasy Legend.

Released in 1990, Final Fantasy Adventure plays a bit more like Dragon Quest than FF. You begin by creating four characters from several choices of class/race, Human, Mutant, and two types of monster. Humans are good at physical attacks, while Mutants specialize in magic. Monsters can use special abilities as well as eat meat dropped after battles to transform into other monsters, which you’ll want to do every so often because of every attack’s durability. Weapons, spells, and abilities all have a limited number of uses in all three games. Only Mutant’s ESP spells and monster abilities can be restored at an inn, the former can be replaced randomly and the latter run out very quickly, so you’ll need the mountains of cash battles reward you with to get by. 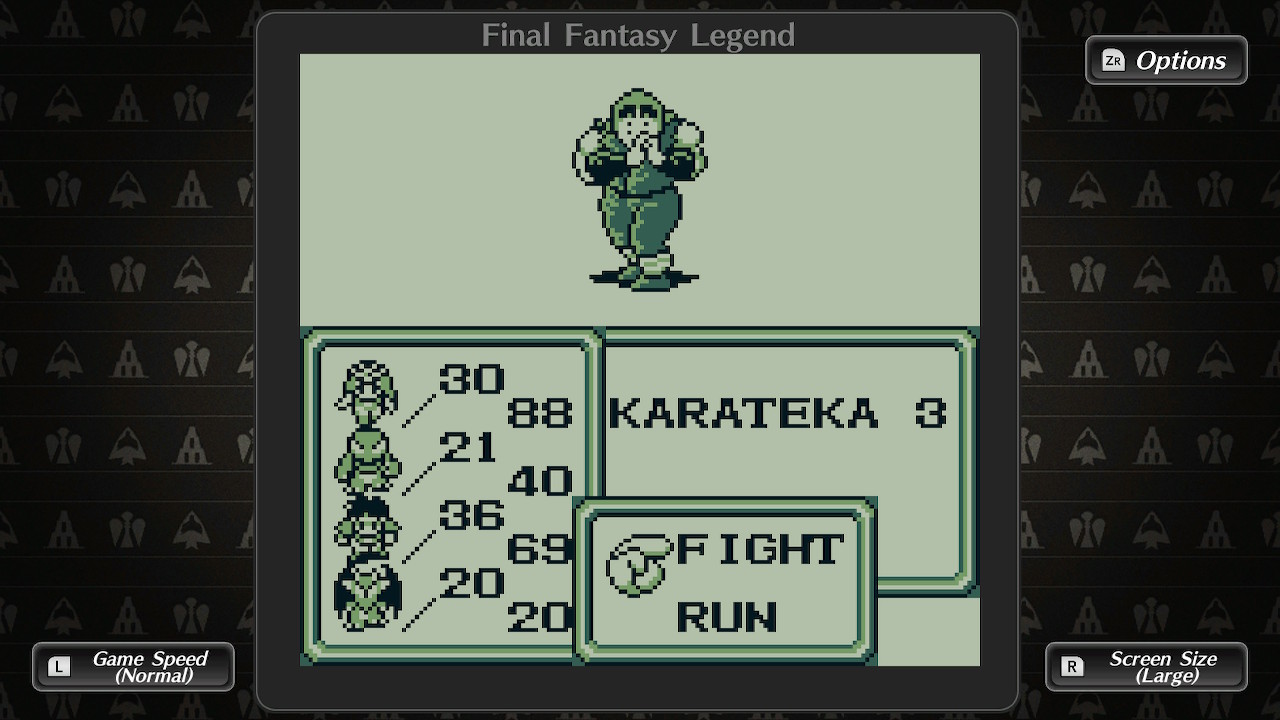 FFL revolves around a mysterious tower, and your goal is of course to reach the top of it. Several stories use this simple premise, but I find it never gets old. There’s always a nice sense of mystery about what’s around the next corner which this game capitalizes on to great effect. Each area has an objective to accomplish as you explore the main floors, which is a neat surprise when I expected simple corridors considering the hardware it was made for. (This was actually the first RPG on a handheld, as well as the first portable game with a battery backup.) Honestly, I didn’t expect this game to hold up as well as it does. I find it a bit too difficult for its own good (especially with no leveling system shown to the player) but I do plan on coming back to play more in the future.

Final Fantasy Legend II (1991) adds a bit more story and structure to proceedings. You create a character again (this time with the addition of Robot as a race), but your lead character embarks on a journey to search the worlds for their father this time, collecting magic spheres called MAGI along the way. Each world you visit has a certain number of these objects you’ll want to collect before moving on, which makes exploring feel less aimless than the original. Overall this sequel is a marked improvement on an already good game. Areas are more interesting, NPCs give clearer directions and hints, and you’re actually notified when your stats increase. The battle system does suffer from a significant step back, however, with the addition of a trope that annoys me to no end in RPGs: if an enemy dies on a turn where someone has an attack queued up against them, that character will do nothing instead of switching targets. This makes an already hard game (you encounter way too many enemies at a time) even more difficult. 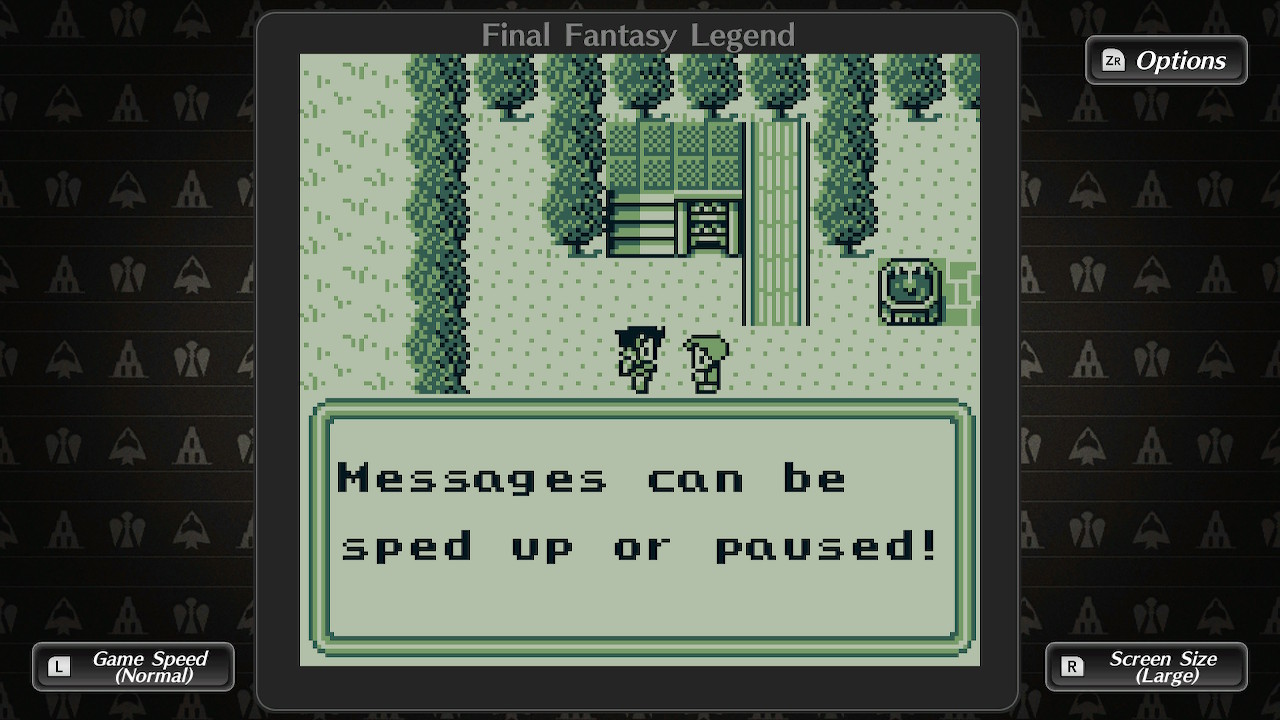 The third and final game in this collection, Final Fantasy Legend III, focuses much more on story with four predefined characters for your party as well as the occasional guest character. Three children from a future laid to waste by the Pureland Water Entity were sent to the distant past to grow up in safety and eventually become strong enough to save their home. Joined by their friend from the present, the four set off in a time machine to defeat the Pureland Water Entity in the past, present, and future. It’s nice to have this more involved story, but I can’t help but feel like the replayability is lessened somewhat by not being able to choose character classes. The ability for all party members to transform into monsters using the aforementioned meat is nice to still have.

All three games are presented in a small window with a customizable border around it. You can choose from one of two screen sizes as well as several borders, but you can’t turn off the borders, and no matter what size you choose you’ll see some frequent shimmering or even screen tearing when the game scrolls. At any time, you can also toggle between normal and fast modes to speed things up a little, but it doesn’t butcher the music and sound effects (take notes, Nintendo)! It’s a nice touch that you can choose between the Japanese and English releases (text and all) from the main menu, but there are no other frills to be found here. Most strikingly absent are the games’ box art and manuals. These games lack any sort of tutorial, so players are left in the dark as to how basically everything works. The third game originally came with very useful maps, which aren’t included here.

Collection of SaGa Final Fantasy Legend contains three good games, but lacks any extras like manuals, save states, or cheats other than game speed to make it stand out. It’s certainly a better effort than any of Nintendo’s recent re-releases, but we can do much better to preserve the history of games.

David is the kind of person to wear his heart on his sleeve. He can find positives in anything, like this is a person who loved Star Fox Zero to death. You’ll see him playing all kinds of games: AAAs, Indies, game jam games, games of all genres, and writing about them! Here. On this website. When not writing or playing games, you can find David making music, games, or enjoying a good book. David’s favorite games include NieR: Automata, Mother 3, and Gravity Rush.
Related Articles: COLLECTION of SaGa FINAL FANTASY LEGEND
Share
Tweet
Share
Submit