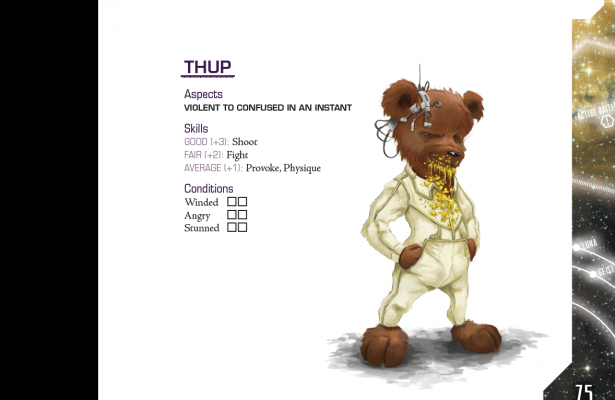 A dark hand reaches out over the galaxy. It’s changing minds, gaining power, and manipulating entire star systems. True heroes could go out to right this wrong…but all we have is you, and I guess that will do. Heart of the Fury is a sprawling pulp sci-fi campaign for the Bulldogs roleplaying game. Bulldogs sets you center-stage as a crew of spacefarers who scrape by doing their best to survive in a diverse galaxy, running whatever jobs they can and keeping hostile aliens well behind their hyperdrive warp signature. It uses the Fate engine as its basis, relying on all of its power for cinematic action but tweaking Fate in intelligent ways to make Bulldogs its own game, with special rules for aliens, gear, and stress tracks that uniquely enhance the science fiction aspects.

Heart of the Fury tells the tale of the Fury itself: a vast, multiplanetary group that is unifying under a single banner at an alarming rate. Those who should normally oppose them instead get converted to their cause, and this galactic threat is continuing to expand. As the Fury brings order to the galaxy, it eliminates freedom, and the players quickly (and likely unwillingly) get wrapped up in this conflict. Over the course of the campaign they will solve the mystery of the Fury and put it to rest…or die ignobly in the attempt.

Heart of the Fury, along with the twelve adventures that make up this story, introduces Psychic abilities to Bulldogs, as well as extra races and gear. These abilities are limited, though very powerful. They are unlikely to break the game in a serious way, but a careful GM could be thrown off if they are not accounting for their player’s psychic abilities. That said, the concept of psychics is integrated into the story with inspiring thoughtfulness. From high-concept science fiction plots to a poker variant designed specifically for psychics to challenge one another, the new abilities see themselves played out in unique and memorable ways.

The art of the Fury is well made on an individual level but inconsistent as a whole. Each character piece captures the feel of sleazy space adventure, and you can guess most of a character’s history and personality from their portrait alone. There is a humor and danger to the art that never lets you forget the kind of story Bulldogs is here to sell. That said, it is awkward to see several art styles in the space of a single adventure. The background of pages are starmaps of the Bulldogs galaxy, and these pieces have every bit the grandeur, majesty, and mystery of space, as well as being accurate depictions of astronomical material. Their color changes slightly per chapter by focusing on a different area of the starmap, which is a clever way to signal subconsciously where you are in the adventure.

Each of these characters fits in perfectly with the theme and narrative of Heart of the Fury. They just don’t happen to fit in as well with one another.

Unfortunately, these starmaps and character pieces are the only type of art in Heart of the Fury. We get no depictions of starships, locations, or items apart from grids used on specific areas to explain their layouts. These grids are extremely clear about what objects are in a location and how they are laid out, but they don’t sell the flavor of places like larger pictures would. The only large piece we get is the cover, which is pulp sci-fi through and through. This is appropriate, as the campaigns influences include Aasimov’s Foundation and sixties era science fiction novels in all the best ways.

The text is clean and easy to read. I was reading through the PDF, which unfortunately does not have linked bookmarks in the sidebar or an index at the end of the book. The table of contents does have links to areas in the rest of the book, which saves some time since you don’t have to flip throughout the book just to find a certain section. It also functions as a sort of front-loaded index, containing references to ships, monsters, gear, notable NPCs and more to help you navigate the text. The designers also made a small, though very appreciated, move with regards to page numbers: most pdfs are direct copies of the book. As such, the cover, title page, and table of contents take up the first few numbered pages in your PDF reader. Heart of the Fury has lettered pages in this section of my PDF reader so that page references in the rest of the book are the same as the actual page number. Having page 90 be the same in both versions saves a huge amount of trouble when you are following a specific page reference.

The meat of Heart of the Fury is its twelve adventures which tell the make up the long story of a universe living under the growing threat of the Fury. Each adventure has twists and turns of its own but slowly ties itself into the larger threat that is facing the galaxy. These adventures are structured organically, flowing from one to the other without feeling like they are on rails. They also explicitly let you run Heart of the Fury by going directly from one to the other or by weaving them into an existing game more slowly. The overall book starts off inauspiciously with some simple jobs but by its end has the characters holding the fate of millions in their hands.

You truly get to feel a part of something as this adventure develops. And that something is spaaaaaaaace!

These adventures are diverse, and challenging on many different levels. There are striaghtforward gunfights of course, but players will also find themselves investigating political allegiances, hiding from an enemy fleet in space, and besting psychics in a gambling den. The locales your players will visit are similarly inspired, ranging from a secluded haven of alien monks to a hostile alien autocracy. My personal favorite is the Armada Works, a massive spacedock used to build fleets of ships and sell them to the highest bidder.

These adventures do have delineated starting points and goals, but they are intensely character driven. They are presented to the GM as a series of problems, with the players being solely responsible for finding solutions. You never find yourself having to push them in any direction other than to give some information to get them on the trail. Unfortunately, this information is translated to the GM through blocks of text, and not much else. You never find yourself with a scene map or a quick summary of the goals of an adventure, so preparation will take some extra effort. Adventures often have a few quick paragraphs to get you from scene to scene, but it will really be up to you to find the best way to summarize the main points of every encounter.

Heart of the Fury fits into the Bulldogs galaxy perfectly, either as your sole campaign or a side story that looms on the edge of space for your players to attack at their leisure. Along the way, they will uncover a dense web of political factions and secretive maneuvers that slowly draw them deeper into the plots. There is a sense of grand history and very human (or non-human in many cases) weaknesses that breathe true life into the fiction. Side characters that only get a few moments on screen have their own secret motivations and histories, which you can use to embellish your roleplay. Some of these characters are particularly memorable, and ones I will shamelessly steal for future games of my own.

I am not going to ruin your introduction to Thup, but suffice it to say he is one of a number of standout characters that would easily be worth a story all their own.

By the end of this campaign, which could last twelve three to four hour sessions or easily go beyond that, you will experience the pinnacle of pulp science fiction. Some of these adventures can be played out of order but as you get later in the game the progression from one to the next is more direct. You and your players will take part in a multiplanetary scheme from the ground level, learning the hopes and fears of their inhabitants along the way. Even if you don’t play this campaign itself, Heart of the Fury is a fantastic resource for science fiction games in the future, especially those using the Fate engine.

Bulldogs: Heart of the Fury

Heart of the Fury is pulp scifi adventure at its absolute best. If you want high-flying action, criminal subterfuge, and galactic intrigue you will get far beyond that with this adventure, and be left with a truly memorable experience.

John Farrell is a legal aid attorney specializing in domestic violence, living in West Chester Pennsylvania. You can listen to him travel the weird west as Carrie A. Nation in the Joker's Wild podcast at: https://jokerswildpodcast.weebly.com/
Related Articles: Bulldogs: Heart of the Fury, Tabletop
Share
Tweet
Share
Submit