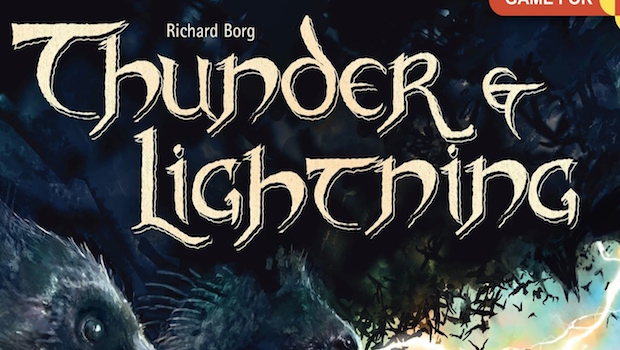 I’ve always found it interesting to see how much Viking culture for a millennia ago still resonates with today. There are days of the week named after Viking gods, Viking culture heavily influences fantasy literature, such as J.R.R. Tolkien’s Lord of the Rings, and Viking gods Loki and Thor feature prominently in Marvel’s multimillion dollar franchise. Yet, the Viking genre tends to struggle in the board game universe. Sure, there are some quality titles, but more so than not, Viking board games tend to fall a little short. It’s puzzling considering the wealth of material available. Z-Man Games hopes to be one of the few to make an impact in gaming with its recently released Thunder & Lightning two-player card game.

Thunder & Lightning pits old rivals, Loki and Thor, against each other in a massive battle for the control of two precious items, Odin’s crown and ring. Loki has stolen the crown and has heard that Thor wields Odin’s great ring in an effort to reclaim what has been lost. Both have amassed a formidable army in attempt to seize control of each of these powerful items. Making a card game thematic can be an arduous task, and this short backstory does a nice job of setting the stage for the game, but it’s the artwork that finishes this off.

The cards are nothing short of stunning. The colors are vibrant yet soft enough to really give you the feel of menacing troops deployed to a frozen battlefield. The cards are well made too, more than capable of withstanding frequent plays. Great looking wooden blocks are also included to place on the Loki and Thor cards when they are in the field. They aren’t really needed since Loki and Thor’s cards are distinctive enough, but they are a nice touch. Overall the artwork is so phenomenal that in my first plays both my opponent and I would often stop as we revealed cards just to check out the artwork. A game is nothing without quality play, but fantastic artwork can make a good title great.

The cards feature fantastic artwork. Thankfully, the game play is just as impressive.

Each player picks a side, Loki or Thor, and receives a corresponding deck. Both sides have basic warriors, ravens, archers, and Vikings, with strength values of one to three respectively. For higher valued strength cards, the decks become distinctive. Thor has Odin’s wolves and forest trolls at his disposal for example, while Loki can command formidable frost giants and terrifying Jörmungandr. In all, each side commands troops with values of one to seven.

If you’ve guessed there’s an element of the classic card game War here, you’d be right. Each player begins the game by committing three troops to the battlefield in three columns. Players typically have a number actions equal to the number of columns in play. During a turn, each side can choose to draw a new card from their deck, place a card on the battlefield until each column contains four cards, or challenge an opponent’s card. When challenging a card, cards across from each other at the front of each column are flipped face up. If both are numbered warrior cards, the highest value wins, and the loser’s card is discarded. It’s simple enough, but thankfully, there’s so much more to this game than that.

In addition to numbered warrior cards, each deck has several mythological cards. These represent items or gods and allow the player special abilities. Some cards allow you to bring cards back from the discard pile. Some allow you to instantly take out one of your opponent’s cards on the battlefield. Players also possess shield wall cards, capable of beating the challenge of some of the game’s most powerful warriors. Loki and Thor also have cards that can be played for bonus action points. There are a lot of different powers available, but the card’s use is right on the card and very straightforward. Even in the first play, we rarely had to double check the rule concerning a card’s special ability. This is greatly appreciated in a card game that’s meant to be played in minutes rather than hours.

Hand management and card placement are the keys to victory.

What all this variety does is give the game great balance. In classic War, there comes a time when one opponent will win because they retain the highest valued card left. Not here. Each card has another card that offsets it. Seven strength heroes are defeated by shield walls. Shield walls are susceptible to attack from the two rated archers. Even the lowly ravens, a mere one strength, have the ability to scout out cards in the opponent’s deck and eliminate any mythological card it finds. Designer Richard Borg has a long list of great game credentials, and he should be commended here for developing a game with such great balance.

There is one card in each deck that is notable for its negative effects rather than for its potential bonuses. The nightmare card can cause you to lose your entire hand, if caught by the raven, or cause both sides to lose an entire column if challenged on the field. It’s an interesting card that has potential to be played as a trap for your opponent. Still, if I can provide one bit of strategic advice, never place the nightmare and Odin’s item you possess in the same column.

Losing the game will invariably come from losing your army or losing the Odin’s Crown (if you are Loki) or Odin’s ring (if you are Thor). Deploying your troops and carefully planning are important and rewarded in this game. Each attack permanently exposes that card. Attacking recklessly and leaving exposed cards in front will lead to a quick loss. Keeping Odin’s vital item in your hand hoping to hide it could backfire with a single scouting action from a raven. The game gives you a lot to think about, especially as attrition begins thinning your ranks.

The short, concise rulebook ends up being icing on the cake. It’s no frills, but there are just enough illustrations and explanation to make picking up and playing easy. If you do have a question about the special abilities of cards, half the rulebook is dedicated to detailed descriptions of them.

I’ve replayed Thunder & Lightning just to try to find weaknesses. I failed. Thunder & Lightning is an outstanding game. My only complaint may be the price. At $34.99, it is a bit steep for a card game. Though, in today’s retail market you should have no trouble finding it for less than MSRP. Regardless, the tremendous artwork, engaging and balanced gameplay, and strategic elements are more than enough to ensure you get your money’s worth. It’s easily one of the best games I’ve played in 2016.

Thunder & Lightning packs an impressive punch in its small box. The game's magnificent artwork will pull you in while the game's immersive play and terrific balance will keep it returning to the table again and again.