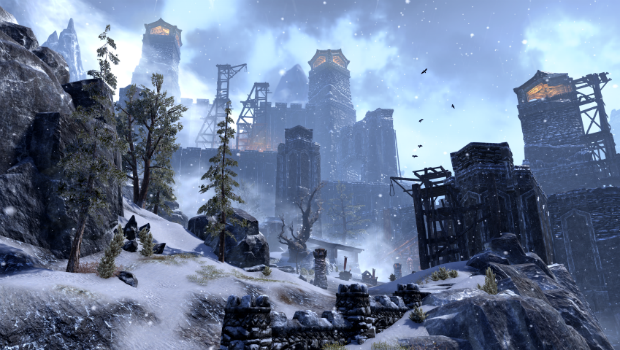 Oh Tamriel, you beautiful land of stone and sky, why do you tear me apart this way?  Ever since I first took off into Vvardenfell’s wild lands in the Elder Scrolls’ third chapter, I’ve really wanted nothing more from a video game than to explore more and more of the diverse world the game presented.  Elder Scrolls Online promised a chance to do just that, but lacks a lot of the detailed gameplay elements and immersive factors that would make it a truly great experience.

With each expansion, my hope is that changes and additions will bolster the lackluster showing the game has had so far.  With its latest expansion, Orsinium, Elder Scrolls Online shows that it is heavy on beautiful landscapes, but low on both the drive and ability to make the gameplay diverse in anyway. The single player experience is mostly what expands with this release, Since ESO has a problem with being an MMO that is not multiplayer friendly, giving the single player experience more of a boost in this expansion is a smart move.

This means that a large chunk of story is opened up in the new lands of Orsinium.  Orsinium is vaguely like the other lands already in the game with it’s flushed-out grassy landscapes, scattered shards of barrels and boxes, and other common elements, but it can surprise you with some of the large mountainous expanses and icy valleys.  The main city in Orsinium is one of the most complex and fantastical areas I’ve ever explored in a video game, perhaps bolstered a bit by the way visual perspective in ESO seems to make the distant landscapes look even bigger than they are up close.

Unfortunately, the stories and tasks laid out in these beautiful lands are dull and simplistic.  No Bethesda title should present missions that are glorified connect the dots-type puzzles, a plague that should only be found in low level JRPG titles.  The perfect opportunity to provide two, three or four man tasks within the game is squandered, further killing the incentive of players to work together on the overworld map.  The new missions also lack for any type of dynamic outcome, and seem to there only for grinding purposes.

One early mission wants you to save a group of merchants and find the others who ran off.  To find these merchants, you simply walk in one direction for around 20 seconds.  Once there, you hear the sad tale of what’s happened, and you’re asked to scout the location of a rebel camp and steal back the needed supplies.  Do you travel across the valley and into the mountains to do this?  Nope, you literally turn around and right outside of the cave you are in is the objective.  This is so low level that it is actually hard for me to believe it is coming from Bethesda.

Two new dungeons — Old Orsinium and Rkindaleft — provide a challenging and nicely leveled experience for four players.  This is the best part of the expansion and the game itself, and for players who are ESO dedicated, these additions are worth the price alone.  While not massively different than the already existing four-man dungeons, the boss battles are spectacularly challenging and rewarding, and the chance for a little camaraderie is appreciated.

Orsinium also opens up the Maelstrom Arena, giving players yet another single player challenge with arena-style battles.  While not necessarily spectacular, having Arena challenges does add nicely to the overall experience of ESO.  Having an Arena also makes the game feel much more like an Elder Scrolls title than before, continuing their long tradition of stadium style fights down through the ages.  This is a very simple but rewarding game mode, and is a much more effective way to grind than the boring story missions.

The Elder Scrolls Online: Orsinium is a pretty land with a dull set of tasks waiting for you to come and grind with. Large, stone-forged, and overloaded with simplicity, Orsinium does a great job of expanding a game for dedicated players while doing absolutely nothing to coax ex-players or new players into the fold. More than medi-orc-re, but less than spectacular, Orsinium seems more like a holdover expansion than an overall addition to the ESO experience.

Patrick Rost has been with Gaming Trend since 2013. At first focused on sports coverage, Patrick has gone on to cover a wide range of games and other products for the website. Outside of Gaming Trend, Patrick writes and records music, grinds perpetually in Elder Scrolls Online (PS4), and lives day to day with his two dogs, Bob and Stella.
Related Articles: The Elder Scrolls Online: Orsinium
Share
Tweet
Share
Submit