Each day, Ryo Hazuki wakes up, trains at the dogo, chops firewood for an old man to earn pocket money, and then meets another old man at an abandoned temple teaching him Kung Fu by making the boy catch chickens. Now, there are two kinds of people reading this: those who are extremely confused by the previous sentence (Hi mom!), and those who see this as par for the course in the Shenmue saga. Ryo’s quest to avenge his father has taken him to some strange places with even stranger people; to name a few, there’s Goro, the thug-turned-doting boyfriend, Ren the rival/best friend, and Joy, who rides through Hong Kong on her motorcycle at breakneck speeds. Shenmue II does nothing if not expand this roster of lovable characters, but longtime fans of the series may be surprised to see how many old friends you’ll encounter in this new adventure. So, will this long awaited entry please old fans? Is this a good jumping off point for new players? Let’s find out!

Shenmue III picks up exactly where the second game left off, which we won’t spoil here since it was a pretty big revelation for the overall plot. What I will tell you is that for the first half of the game you’ll be exploring the village of Bailu in Guilin, China, home of Ryo’s new friend, Shenhua, whose father has gone missing. First off, Bailu is absolutely gorgeous and colorful in a sharp contrast to the original two games more dreary city areas. To be fair, those games came out around 20 years ago on the Dreamcast, so they don’t have the advantage of the amazing lighting on display here, but even among some of its contemporaries today it looks great. It can’t match the technical spectacle of some AAA titles, but the game really shines (pun intended) with its intricate day/night cycle and art style. You can see all this for yourself in the screenshots and the gameplay video above, so I’ll stop gushing and move on. Most of what you’ll be doing in Shenmue III is investigating Ryo’s current lead on whatever mystery you’re trying to solve at any given moment. This means talking to people and the occasional brawl with miscreants unfortunate enough to get between Ryo and the trail of his father’s killer, Lan Di. 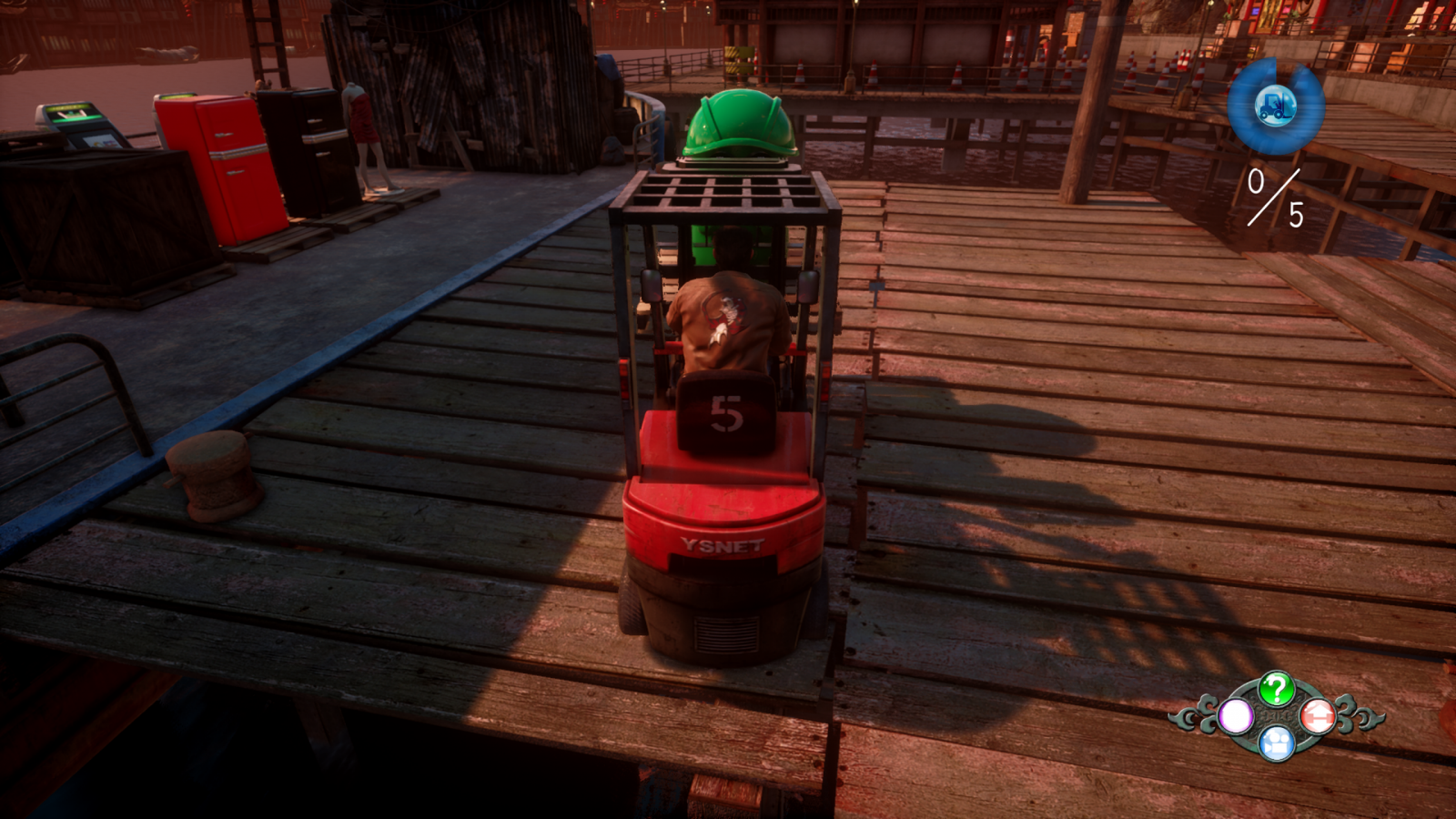 Speaking to townsfolk is dead simple, just press the X button and Ryo will do the rest, you don’t have to choose a dialogue option or anything. It’s refreshing to go back to this simplicity in a world where many games have in depth dialogue trees, but I wish it was just slightly more involved. For example, since the Shenmue series thrives on its detailed world and the experience of existing in it, I would appreciate the chance to simply ask a character how their day is going instead of asking everyone I meet where I can find some sailors. You do get something like this later on in the game, which will please fans of the series, but personally I would like to see this expanded on in future entries. Near the end of Shenmue II, you got the chance to talk quite a bit with your new companion, Shenhua, and she seemed like a very capable and interesting character. While you can occasionally small talk with her or see her investigating around town, it feels like here character has been pared back, extremely. From how important she was foreshadowed to be in the last two games, she is disappointingly shoved to the side. I don’t know about other fans, but I was hoping to fight and investigate alongside her, so how she is presented in this game is disappointing to say the least.

Speaking with your fists has changed quite a bit since Shenmue II, and thankfully for the better. You now have five attack buttons, two for punches, two for kicks, and one to execute the currently selected move. You can now block attacks as well, blocking will drain a meter at the bottom of the screen and once it’s depleted your guard will break and you’ll take damage. You won’t be fighting as many opponents at once as previous games, but in return you get a much better feeling combat system and tougher opponents. Overall, this is the best combat has ever felt in a Shenmue game, but some mechanics are poorly explained. For example, training and actual combat have very different rules and it may take a bit to get acquainted with the differences between the two. In training, you essentially want to spam your skills over and over using their button inputs (Not the R2 button, like in normal combat) to level them up, and thus increase your attack power. However, if you’ve mastered all your techniques, you’ll need to seek out skill books in shops to get even stronger. Unfortunately, most of these books are prohibitively expensive, so you’ll frequently hit walls in your training. It can be frustrating to see the huge gap in your endurance levels, which you increase by playing certain minigames, and your attack power especially when the game so heavily relies on establishing a daily routine. In addition, while endurance is the easiest attribute to increase, it begins as the most frustrating. Endurance is what determines how big your health bar is, and how big your health bar is determines how much you can do before needing to eat. Pretty much everything you do will drain your HP, from walking to getting punched in the face, or even just standing still at times. This would be interesting in concept if running around town would also contribute to your stats, but as it is, it’s just an annoyance. It doesn’t add anything to the experience save for the hilarious image of Ryo stuffing 12 cloves of garlic in his mouth just before fighting someone. 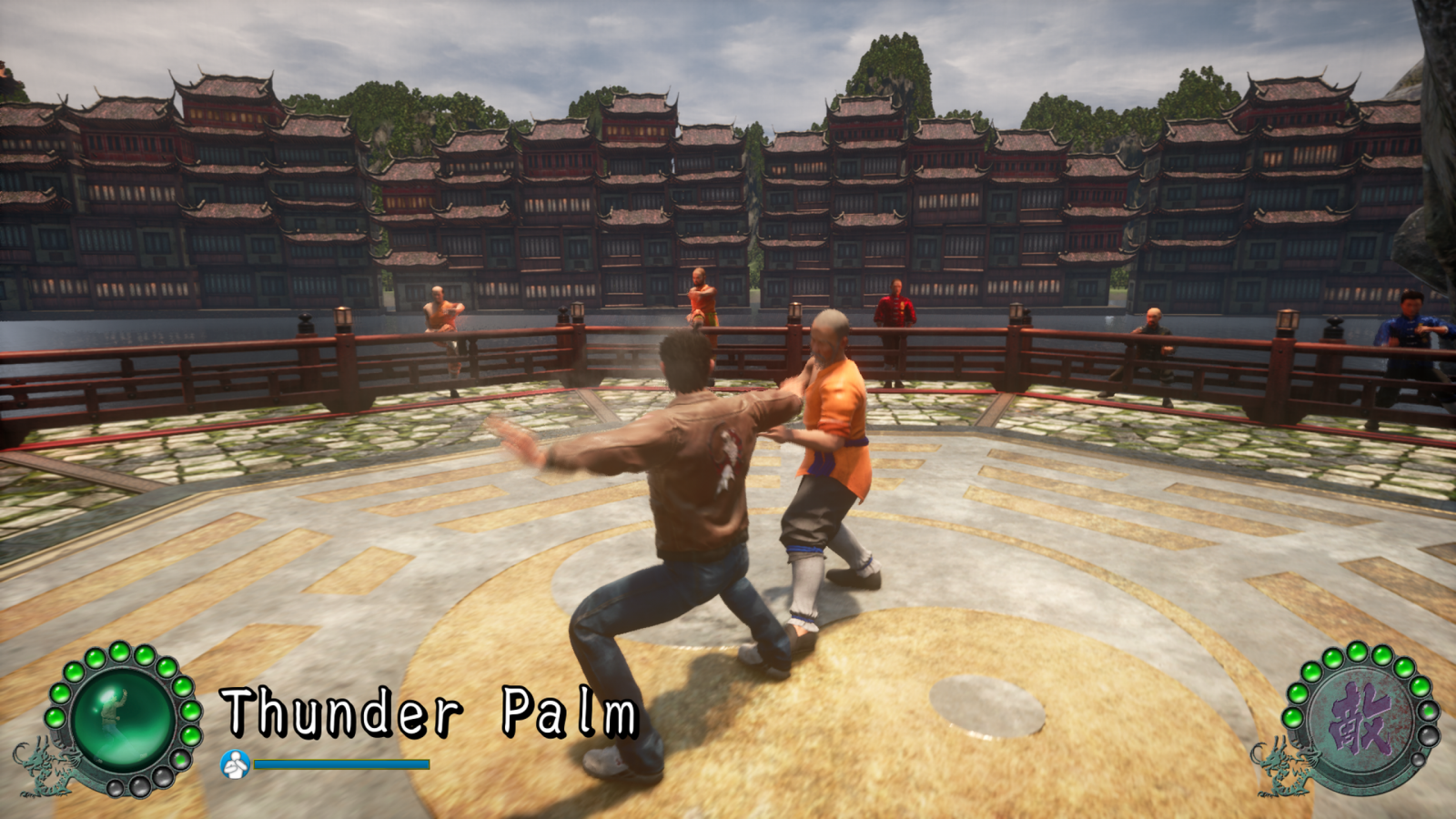 Outside of dialogue and combat, there’s plenty to do. You can chop firewood, play arcade games, go gambling, and even drive a forklift. The Shenmue series is all about exploring and finding your own fun in an intricate world, and the third entry delivers in this department. The series is also known for firmly establishing the often bemoaned Quick Time Event, or QTE, where you are prompted to quickly press an indicated button to perform a specific action in a cutscene. I can’t believe I’m writing this but… I actually really enjoyed the QTEs. Some of them have some absolutely hilarious Jackie Chan-esque action, and if you fail, you can restart these short sections almost immediately. If you do fail, it often results in Ryo being laugh out loud incompetent so it’s almost always worth it to just see what happens. As I mentioned, all of the QTE sections are blissfully short, so there’s no need to fear the return of Ryo’s greatest foe: a plank of wood bridging a small gap.

As much as I’ve praised the game so far, it’s not without its annoyances. I’ve already mentioned the tedious to manage HP system, but the plot will frequently come to a halt and ask you to earn a ton of money or improve your martial arts skills. I can understand this happening at least once, to make sure the player is actually making use of the game’s systems, but it happens way too many times and just feels like padding. It’s especially frustrating when you can’t even use the things you’ve earned outside of a single cutscene. I really enjoyed slowly becoming stronger or earning money for that one T-shirt I wanted, but forcing it in this manner ends up feeling more tedious than fulfilling. 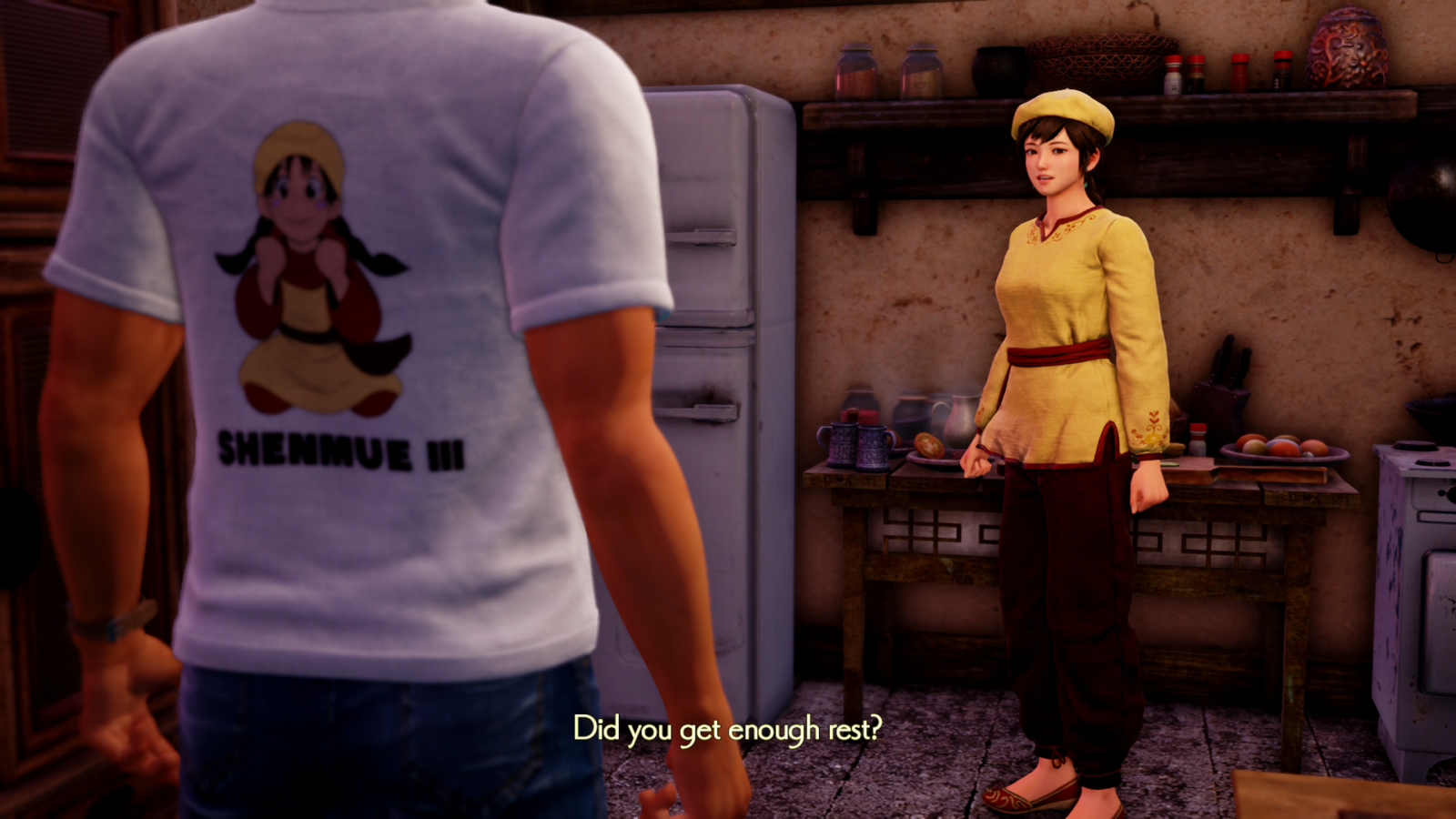 So, it’s time to answer the questions I posed at the beginning of the review. Will Shenmue fans enjoy Shenmue III? The answer is an emphatic yes. It takes the best parts of I and II and mushes them together while providing the next exciting chapter in Ryo’s story. Are newcomers welcome as well? That answer is more complicated. In short, no, go play the other two games first, the recap video doesn’t go in depth enough for those unfamiliar to understand the story or feel invested. On the other hand, if you’re just looking to explore a detailed world and enjoy some martial arts antics and drama, you will definitely find something to enjoy here. Just watch the first two games’ cutscenes online first.

Shenmue III feels like a remake of the Dreamcast game that never existed, for better and worse. It’s got everything fans loved about the Sega classics, along with some of their baggage. Still, the best of the series is the greatest it’s ever been. It can feel as bloated as the originals, and some mechanics feel unnecessary or are poorly explained. If you’re curious about that fabled Shenmue charm, though? This is the best entry to date.

David is the kind of person to wear his heart on his sleeve. He can find positives in anything, like this is a person who loved Star Fox Zero to death. You’ll see him playing all kinds of games: AAAs, Indies, game jam games, games of all genres, and writing about them! Here. On this website. When not writing or playing games, you can find David making music, games, or enjoying a good book. David’s favorite games include NieR: Automata, Mother 3, and Gravity Rush.
Related Articles: Shenmue III
Share
Tweet
Share
Submit