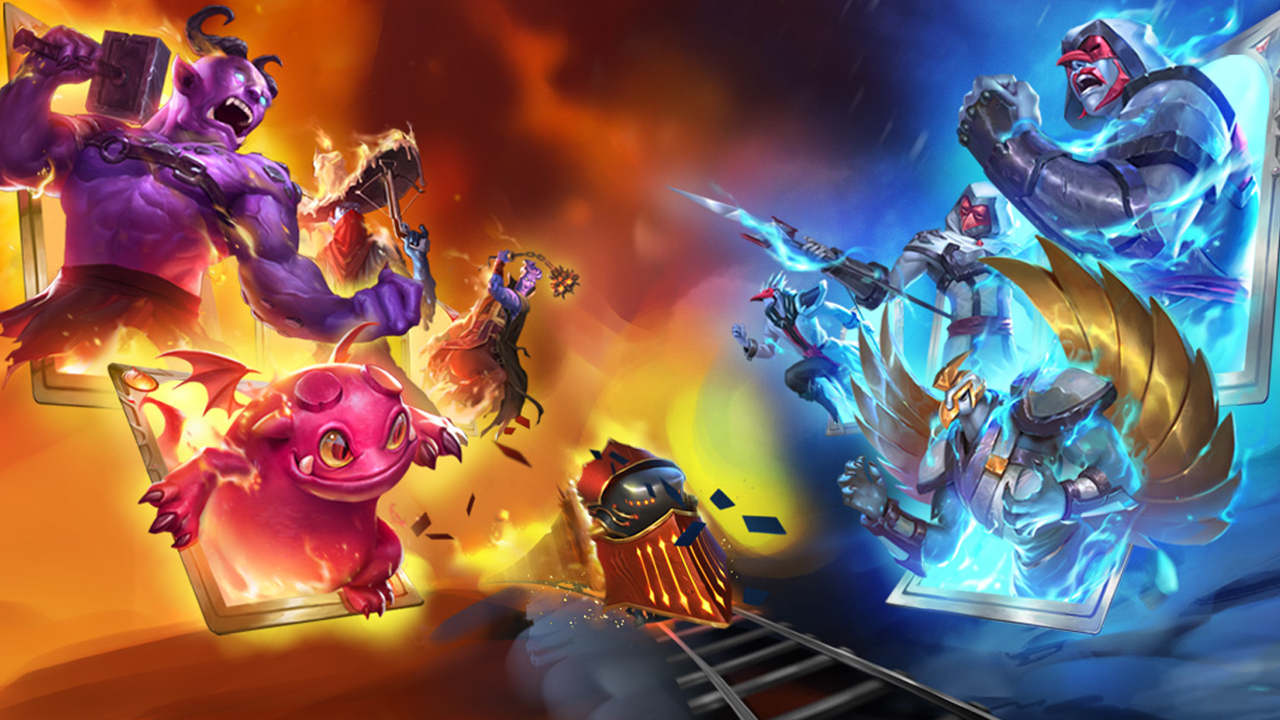 There are more than a few deckbuilders on Steam nowadays, and if you are a fan of the genre, it feels like some sort of summer Christmas. Monster Train looks to capture the best parts of the top tier card battlers into a single game, and it does so with surprising effect. While you’ll immediately get some familiar feeling notes when you watch our Let’s Play videos below, keep watching — this one has something a little bit different than all the rest.

The story for Monster Train is kinda summed up in the title. You represent the nameless and faceless conductor of a monster train hurtling towards Hell as a battle between monsters and angels wages on inside. The heart of your train lies at the top, and it’s your job to deploy various beasties to defend that heart until you reach your destination. You’ll fail, and that’s ok, because you’ll also grow. New allies will unlock, as will fresh relics, cards, spells and more in this roguelike, but like life, it’s the journey that matters.

Each “run” to Hell starts the same. You’ll pick a primary creature type, and then a secondary, and both will team up to try to stop the enemy from destroying the Pyre — the heart of your train. They do this by flooding into the bottom floor of this four-story locomotive. Each round, they’ll fight against whatever creatures you’ve placed on the same level, running up the stairs to the next level at the end of the round, should they survive. Ascending to the top floor lets them hack away at the Pyre until it ultimately dies, ending your run. If that seems incredibly simple, that’s because it is…or at least it starts out that way.

In the beginning of the game, you’ll have just two of the five creature types. The primary creature will represent the bulk of your defending army, with the secondary filling in as backup. Battling creatures yields money to spend on upgrades for the creatures or spells, as well as the opportunity to purchase relics that can help you succeed. Each run has a left and right path as you descend through the nine rings of Hell (just like Dante said!) and that means making decisions at each level. Maybe that gives you a chance to heal your Pyre, duplicate a card, or enter a mysterious cave that can yield all sorts of crazy and random rewards. You might even meet some new friends there, gain a powerful boon, or even pick up a curse that hurts you every round. Randomness rules the day.

The five creature types in the game can’t be any more different. The Hellhorned are all-out assault beasts, focusing on huge damage and resiliency. Awoken are plant creatures that emphasize healing, but can create formidable walls as well. Stygian Guard troops are angry little sprite demons that use totems to wreak havoc, but make for terrible tanks. Umbra are literal monsters, eating the cute little “morsel” creatures to grow their power. The Melting Remnant are what happens when Lumiere from Beauty and the Beast goes off the reservation, summoning melting candle soldiers that have a limited lifespan but are cheap to summon. Each has their own strengths and weaknesses, but mixing and matching them can create crazy and fun combinations.

Unlike games such as Slay the Spire, there aren’t “filler” battles. You’ll square off against a few rounds of creature soldiers as the boss flits around at the edges, causing grief for your creatures. Each boss has a unique power or two that you’ll have to contend with, and a massive pool of health. Dispatching them, you’ll be given a choice of two paths with ways to expand and enhance your roster, as well as a visit to the Dark Forge. The Forge is the only way that you can grow your hero creature — the only creature in your deck that you can’t pay to modify.

Once you’ve beaten the game with any of the creature combinations it unlocks the Covenant. This mode lets you take on 25 unique battles that offer up special modifiers and tougher enemies, but also yields even more powerful cards for your deck.

Beyond the single player campaign, there are three multiplayer modes. Hell Rush is a timed battle that you can play for score, competing with your friends. The Randomized Daily Challenge is precisely what it sounds like, pre-selecting your primary and secondary creature types. Create Your Own is also self-explanatory, offering new challenges with crazy modifiers like doubling your cash (Moneybags), two less cards on each draw (Small hands), or having to discard a card every round (Yeetpocalypse), just to name a few.

I do have to admit that there are certain combinations that are crazy overpowered, perhaps even broken. That said, as the challenge rises, I found myself seeking out these exploits just to win. Since the game is roguelike, repeatedly playing each level is the key to unlocking everything and ultimately beating the tougher elements, so perhaps this is by design. Still, it does mean that some of your runs will begin to feel very similar.

I was surprised to realize that I’d already played Monster Train for 15 hours before I began to write this review, and I wasn’t even halfway finished with unlocking everything. The randomization of the relics, cards, and other elements of the game keep it fresh and fun long after you’ve beaten the game a few (dozen) times. If you are a fan of card battlers, this is a must have.

Ron Burke is the Editor in Chief for Gaming Trend. Currently living in Fort Worth, Texas, Ron is an old-school gamer who enjoys CRPGs, action/adventure, platformers, music games, and has recently gotten into tabletop gaming. Ron is also a fourth degree black belt, with a Master's rank in Matsumura Seito Shōrin-ryū, Moo Duk Kwan Tang Soo Do, Universal Tang Soo Do Alliance, and International Tang Soo Do Federation. He also holds ranks in several other styles in his search to be a well-rounded fighter. Ron has been married to Gaming Trend Editor, Laura Burke, for 21 years. They have three dogs - Pazuzu (Irish Terrier), Atë, and Calliope (both Australian Kelpie/Pit Bull mixes).
Related Articles: Monster Train
Share
Tweet
Share
Submit