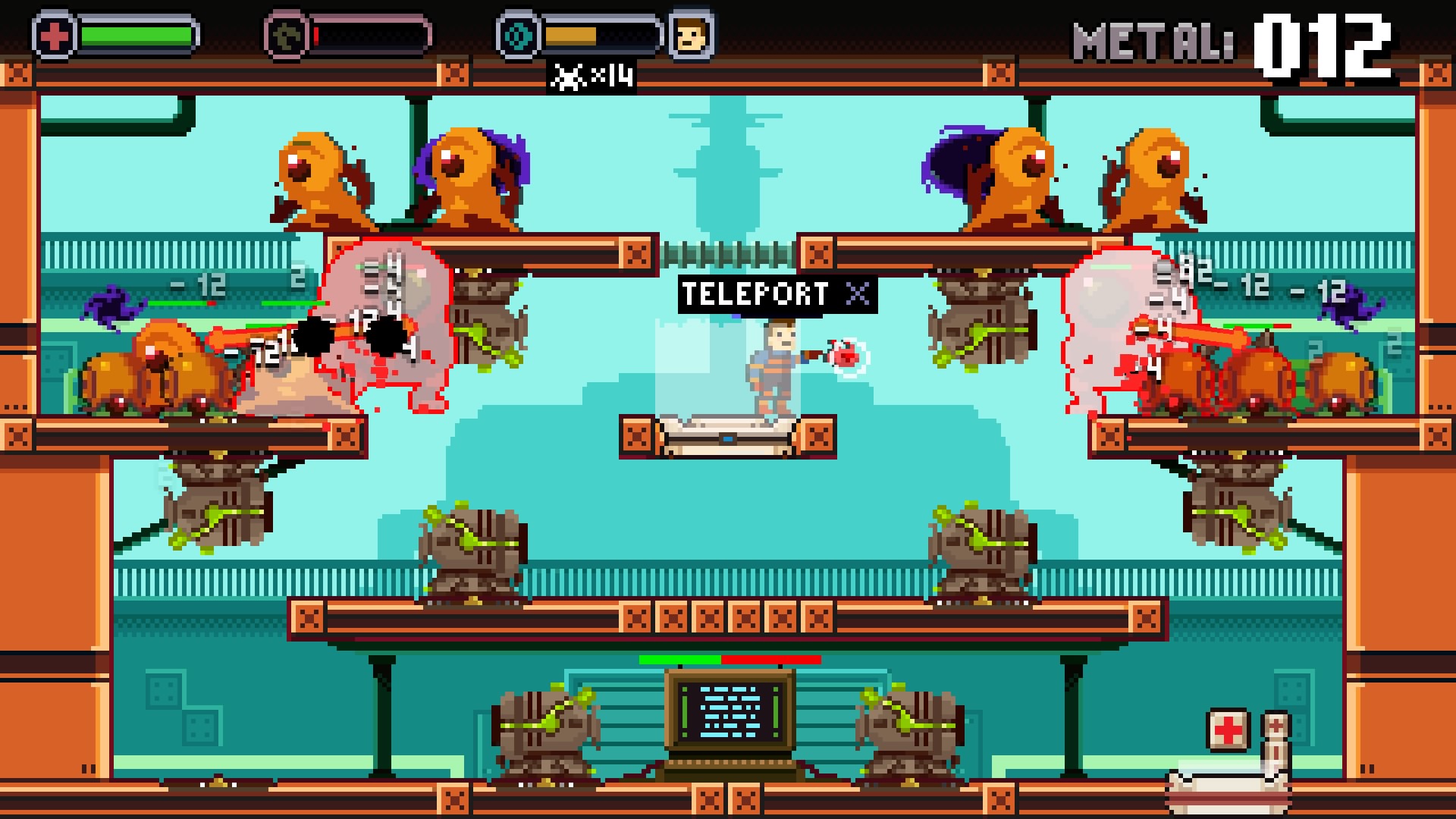 Have you ever wanted to mix tower defense with fast paced run and gun action? Well here’s your chance, as Spacejacked has arrived to PS4.

You play as Dave, the engineer of a ship traveling through space. Unfortunately, your ship has become the target for a variety of aliens that want to destroy your ship. It doesn’t take long before three of your crew members, Azimah, Marcel, and Lee, get kidnapped by some aliens. This leaves you and Scott with the task of searching for your friends in order to rescue them. You won’t be searching for them yourself though; that is a part of the story that unfolds as you play through each stage.

The stages are broken up into separate days, which each involve you defending three cores that are split into three different areas of the ship. This includes the Medical Bay, the Robotics Lab, and the Engine Room, which have their own distinct layouts and core health. You will be hopping between these areas as waves of enemies come through portals and make their way towards the cores. There is a teleporter that you use which opens a menu asking what room you want to warp to. Other than those three rooms, there is also the HQ, which is only used to end the day or speak to crew members. The teleporter is your only way to move between rooms, though there is an exception with a different ship later on in the game.

One of the biggest aspects of defending the cores involves building weapons in designated areas. You can choose between guns, lasers, and a stasis machine. The guns fire rapidly, the lasers charge and fire an explosive blast, and the stasis charges and blasts the surrounding area with moderate damage while slowing down enemies. In order to build these weapons, you use metal, and each weapon requires a different amount. Metal is obtained by killing aliens and also in a minigame that we’ll get to later. Each weapon has its advantages and disadvantages, so choose what works best for you. Your available metal and weapons that you’ve set up transfer from day to day, which builds a sense of accomplishment and protection.

What would weapon building be without the ability to upgrade them? All three weapons can be upgraded two times before they’re maxed out, and the costs to upgrade rises dramatically. Don’t worry, you’ll get enough metal to max out some weapons, but that doesn’t mean that you won’t have to do some resource management. Helping with the resource management is the ability to dismantle your weapons and get the full cost back. This allows you to switch up your defenses for the situation and try out different strategies. This especially comes in handy for when one room starts getting swarmed more than another room. I had plenty of situations where I would dismantle one or two weapons in one room and rush to the next room to bolster my defenses. The game can get pretty hectic, so you need to think fast.

In addition to the defenses you can build, you can fight the aliens yourself. You are given a blaster that can overheat if you fire too much. If you’re like me, you’ll be using that blaster almost every chance you get. Dave also has a gravity suit, which is important for traversing a room when you’re in it. Hitting a single button or flicking the left stick flips gravity for you so that you can walk on the ceiling or get back to the floor. This doesn’t affect anything else in the world, but it’s the game’s alternative to jumping. Mastering this skill will allow you to quickly move around and defend the cores. This is extremely important because if any of the cores gets destroyed, then you lose and need to restart the day.

As you save your crew members, you’ll gain access to new upgrades and even a minigame. Azimah gives you access to the Metal Retrieval Pod, which places you in an arcade style, side scrolling, space shooter. The goal is to avoid aliens and asteroids as you shoot the aliens and collect metal. After a slow section, a message pops up and things speed up quickly. It’s a good challenge, and if you make it to the end without getting hit, you’ll earn however much metal you collected. If you get hit even once, the minigame ends and you leave with whatever metal you obtained minus the cost of repairing the pod. The repair cost isn’t high, so you won’t take much of a hit. The pod takes a day to recharge, which means you only get one chance a day. Even so, it’s more than worth the time if it adds to your metal supply.

In addition to that, Marcel will upgrade your blaster, and Lee can reprogram your weapons. Marcel can increase the damage, firing duration, and bullet penetration of your blaster at the cost of metal. The costs can be kind of high, so I opted to focus my metal more on building weapons, although I did upgrade my blaster once in each category. Lee can reprogram your weapons so that they function in an alternate way, which is laid out for you to see. For example, the guns become penetrating cannons, the lasers become constant tracking beams, and the stasis forgoes damage for a constant slowing effect in the surrounding area. Amazingly, these changes cost absolutely nothing, and can be changed as much as you want at the beginning or end of each day. Just because these alternate versions are available doesn’t mean they are automatically better than the originals. I chose to reprogram them and the new versions worked better for me, but some players may prefer to stick with what they started with. Experimenting can be helpful, as it can be the difference between losing and finding the perfect strategy.

The pixelated designs along with the arcade style music is a great combination. I never got tired of the music; in fact, I feel like it made the hectic nature of the game even more enjoyable. Hearing the firing of the guns, cannons, and lasers all mixing together added to the idea of going all out in order to protect the ship. Speaking of going all out, be ready for a lot of running and gunning. In my experience, you are just as important as the weapons you build. This can be affected by the mode you choose when starting the game as well. You can choose Planner, which gives you more time to plan in between waves, or Original Badass Mode, which gives you less time and keeps the game more hectic and reactionary. Original Badass Mode is the best way to play Spacejacked in my opinion, as it keeps you on your toes and tests your skills.

Along with the story mode, there is also endless mode and challenge mode. Endless mode lets you choose one of two ships to play in, and tasks you with defending the cores for as many waves as possible. Challenge mode has a selection of missions, with each one featuring enemies revolving around a certain theme that you need to defend the cores from. Both of these modes are fun and engaging, which adds to the replayability of the game. The story mode itself doesn’t have much replay value, but these modes more than make up for that. In the end, no matter what mode you’re in, you’ll have a great time building, blasting, and being a badass.

Spacejacked is a wonderful combination of tower defense and fast paced action. The game's hectic nature along with the necessity to plan out your defenses makes for a fun and engaging challenge. It may take some trial and error to find what works best for each player, but that's part of the fun.

Codi loves to play video games and watch movies. He will watch almost any kind of movie just to experience them. His ideas take inspiration from the shows and movies he watches, and games he plays. He also loves a good pun.
Related Articles: Spacejacked
Share
Tweet
Share
Submit