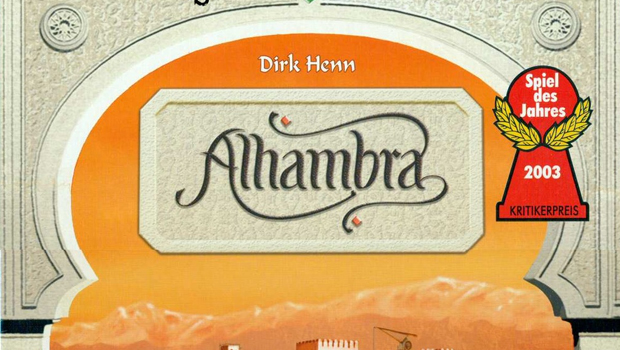 Fun Fact: In 1891 Evgraf Ferdorov formally proved that there are 17 distinct plane symmetry groups. These ‘groups’ define how a pattern can be permuted on a single, two dimensional plane. Due to their application, these groups are commonly called wallpaper groups for how they describe all forms of wallpaper patterns. It turns out they also describe tile and mosaic patterns. The Alhambra, which was built in earnest ~500 years before Evgraf was born, is noted for having examples of all 17 of the wallpaper groups on the walls and grounds. I told you it was going to be fun! Only on a slightly connected note, the game Alhambra is also fun!

In Alhambra players are collecting resources to build their own castle/fortress complex, trying to make it the most elaborate and the most protected. Alhambra has been around for a while, being first published in 2003. Ever since Alhambra has set the trend for tile laying and set collection games, becoming a staple of Euro gaming. Is Alhambra a stale, dusty game? Or is it worthy of the title ‘Classic?’

When the game ends the best Alhambra is determined by the score players accumulate while playing. During the game, there will be three scoring events. During each of the scoring events, player’s Alhambra will be scored. Scoring will be covered below in more detail, but in general, the more diverse a players Alhambra is, the better. After the final scoring event, play stops and whoever has the most points is declared the winner.

Play is focused around two different things: colored currency cards, and building tiles. The currency cards are used to buy building tiles that are placed by the payers. Buildings are placed in front of players making their own personal Alhambra. On a building tile you will find the type of building, the walls next to the building and the cost to buy it. There are different types of buildings, of varying rarity, with each type being scored differently. Players will try to place tiles in such a way that a continuous wall is formed around their buildings, this will help them score points as well.

On a players turn, they have the option of performing one, and only one action. A player may take currency cards, they may build buildings or they can remodel their Alhambra. Four currency cards are laid out, face up for a player to draw from. Currency cards come in one of four colors, with values ranging from one to nine. When choosing to draw cards, a player may take one regardless of value, or may take more than one as long as the total value gained is less than five. The building market is made up of four color coded spots. When buying, the color of the currency used must match the color of the market location, and with a value that is equal to or higher than the cost printed on the building tile. Tiles that are purchased must be played, either to a players Alhambra or to their reserve space. This reserve is used when remodeling. Players may place a tile from the reserve, or swap a tile in play with one from the reserve. This allows for modifications of layout at the expense of taking a turn.

There is one exception to the turn structure above: if a player is able to buy a building with ‘exact change,’ the payer may take an additional action. This additional action can be any of the three previously mentioned. This means that players have the option of buying another building. If exact values are used again, they can take yet another action. This can be chained a maximum of 4 times, as there are only 4 buildings to be purchased.

After a player is done, the building market is refilled from a bag of building tiles, the currency cards are replenished. Play continues around the table.

Inserted into the deck of currency cards are two scoring cards. When scoring, whoever has the most of a specific kind of building will get points associated with that building. The points for each building type are printed both on scoring aids, and the scoring card itself. In the first round, only the majority holder will receive points. In the second round, the majority will get even more points, but the runner up will also receive points. When the last building tile is played, the third round of scoring occurs, with the first, second, and third in each category scored. In addition to types of buildings, whoever has the longest continuous wall receives points equal to the length of the wall. After this third scoring round, the game ends with the winner having the most points.

Alhambra has been printed in a number of different editions. I was playing with the ‘anniversary edition’. This contained a very nice board for keeping track of score and providing a space for the currency cards and building tiles. The cards and tiles are high quality, providing a good tactile feeling. In addition each player has a scoring meeple and a wooden starting space to be built around. The art style of the game is functional, but not anything special. The game is color blind friendly as everything is either distinguished by color or shape/name.

The rules of the game are simple and easy to teach. Having the board in front of you almost explains the game itself. The only issue is in tile placement rules that can be a bit finicky. Any seasoned gamer will not have any issue picking this up and playing it. Teaching the game to new players takes less than 5 minutes.

The game supports up to six players. There is a two player variant that handles the competition for building tiles. It seemed as though 4 or 5 players offered a good amount of tension in the building market. As turns are so quick, the addition of more players does not bog the game down too much. Most games clocked in right at the hour mark.

It is obvious why Alhambra is a staple tabletop game: the rules are simple, yet the strategy is deep. Both of these things make it a game that gamers are willing to play with, and more importantly teach to, non gamers. It fits the title ‘Gateway game’ like a glove. The rules are intuitive and straightforward. After one play, there is no need to consult with the rule book. The flow of the game is interesting, as in later rounds the point values become a bigger deal. And to top it off, it looks great out on the table. 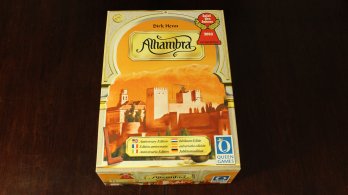 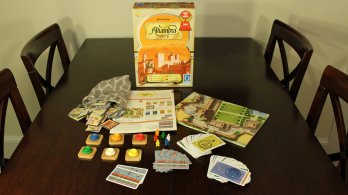 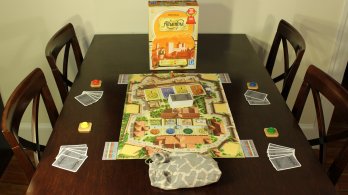 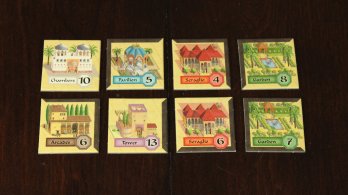 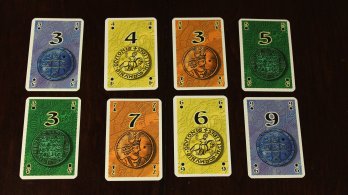 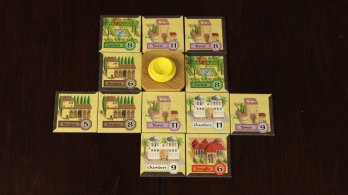 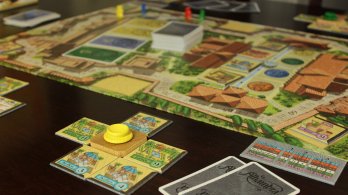 There is almost no player interaction. This can be seen in whatever light fancies you. If your opponent is constantly getting lucky with their buys, you just sit and watch. But at the same time, you are in your own little world, coming out of it for scoring cards. There is no need to worry about another player messing with your plans. The only thing that might happen is someone could take a building tile you might want. There is enough variation in the buildings to not make this a deal breaker, it ends up just being a bump in the ride.

When playing with seasoned (or just aggressive) players, the competition for the building market can be high. As the scoring is determined by who controls the most of any one type, the discerning player will be keeping a close eye on their opponent’s Alhambras. What is nice is that this strategy is not needed in any way to play the game, it is just one way to win the game. This means that some players have fun making an interesting complex with little care for what is going on around them. The sense of accomplishment, looking at what you have built is winning enough.

Don’t come running to Alhambra for the theme. The theme is weak, but that is not really the point… this is a Euro! While the buildings make sense, the color of the currency is never explained. This does not really add or take away from the game, it is just light theming.

Currency cards don’t follow the value system that you would expect. At first pass you may think that everyone is going to go after the high value cards, but you quickly see that the lower valued cards are just as important. This balance leads to a very satisfying choice to be made. Do I take the low value cards that will help me meet the exact value of a building, leading to an extra turn. Or do I take the high valued cards so that I can buy buildings faster. What this means is that there are no bad choices! It is one of the many reasons this is great for new players. The quality, and strategy, of the choice comes from how much can it help you.

The only negative thing I have to say about Alhambra is that after a few plays, it starts to lose its pull. It feels the same every time as there is not really any variation. The same buildings are used, the same cards are used. Nothing really changes all that much from game to game. This could be ‘solved’ with expansions, which there are plenty (more than 7). Regardless, this is still much more enjoyable than other games non-gamers try to get me to play.

Alhambra has earned its stripes as a Classic game. It has stood the test of time, and is still being produced and played by many. People will be drawn to its straightforward rules, and the light gameplay. While it may not be the heaviest of games, it is still a great experience. I highly recommend Alhambra as a solid addition to anyone's collection, or as a great place to start one.