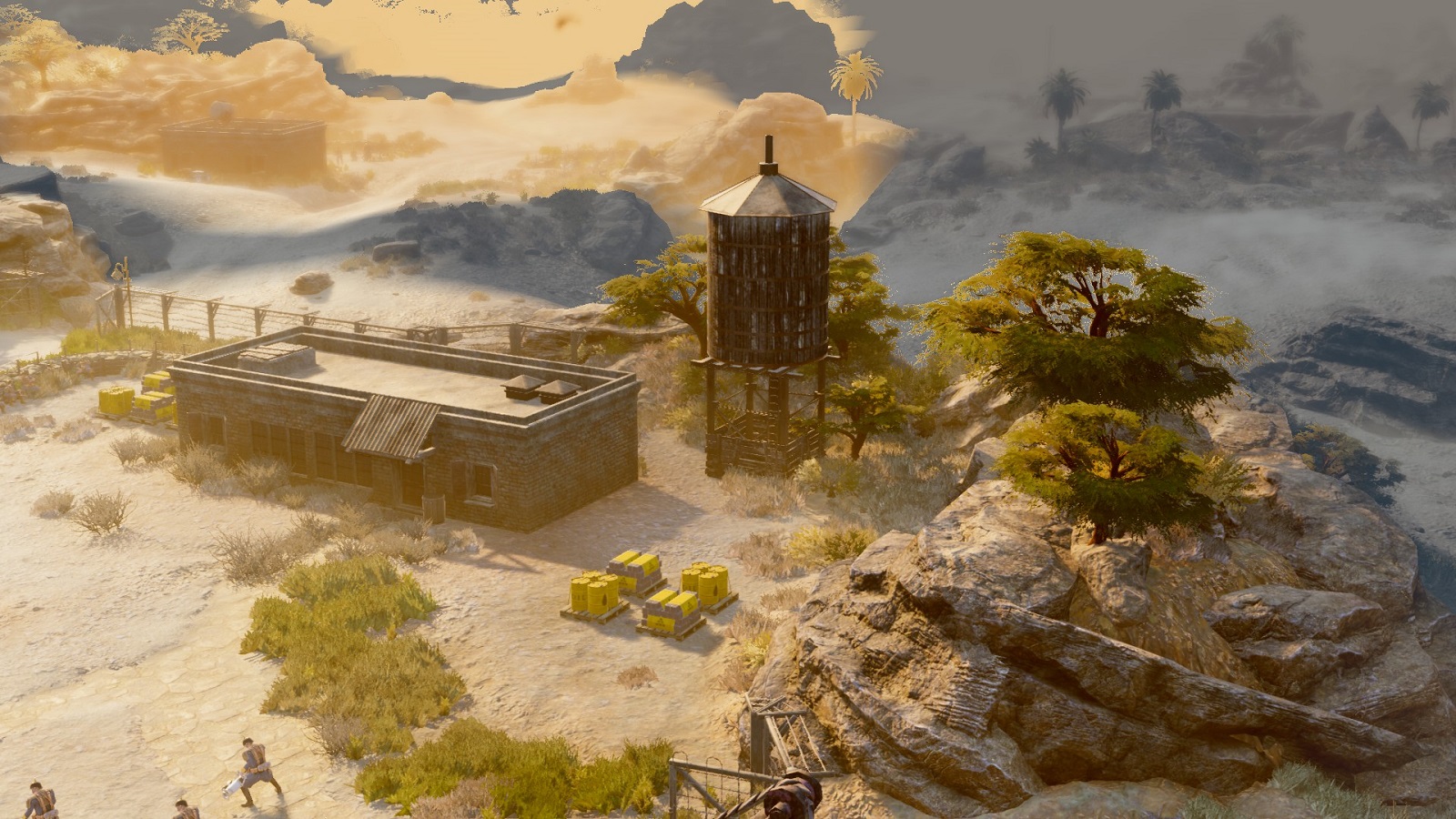 I have fond memories of my time in the dirty, dangerous, diesel-punk universe of 1920+ when I reviewed Iron Harvest late last year. The game was more of what RTS fans loved with a unique spin on a familiar setting and engaging, character-oriented stories to tie it all together. Since then, KING Art Games has released a small slice of story in the form of the Rusviet Revolution DLC. But now, fans can finally sink their teeth into something a little meatier with the game’s first full expansion: Operation Eagle.

Operation Eagle introduces a post-WWI Europe to the USA stand-in, Usonia, the newest faction to toss its hat into the ring. $19.99 USD gets you a new playable faction in the Usonians and a seven-mission campaign, playable solo or in co-op, with a unique story and fresh cutscenes. The expansion is available as a standalone experience, offering the Polania campaign to players without the base game on top of the Operation Eagle content. With the arrival of Usonia also comes new units; the faction blesses the battleground with airborne mech units to try and shake up the dynamics of war. There’s plenty of content to explore, but the spotlight ultimately falls on the Usonia campaign where the new units can really spread their wings. Outside of Usonian workshops, aerial units do little to diversify existing factions’ utility belts. 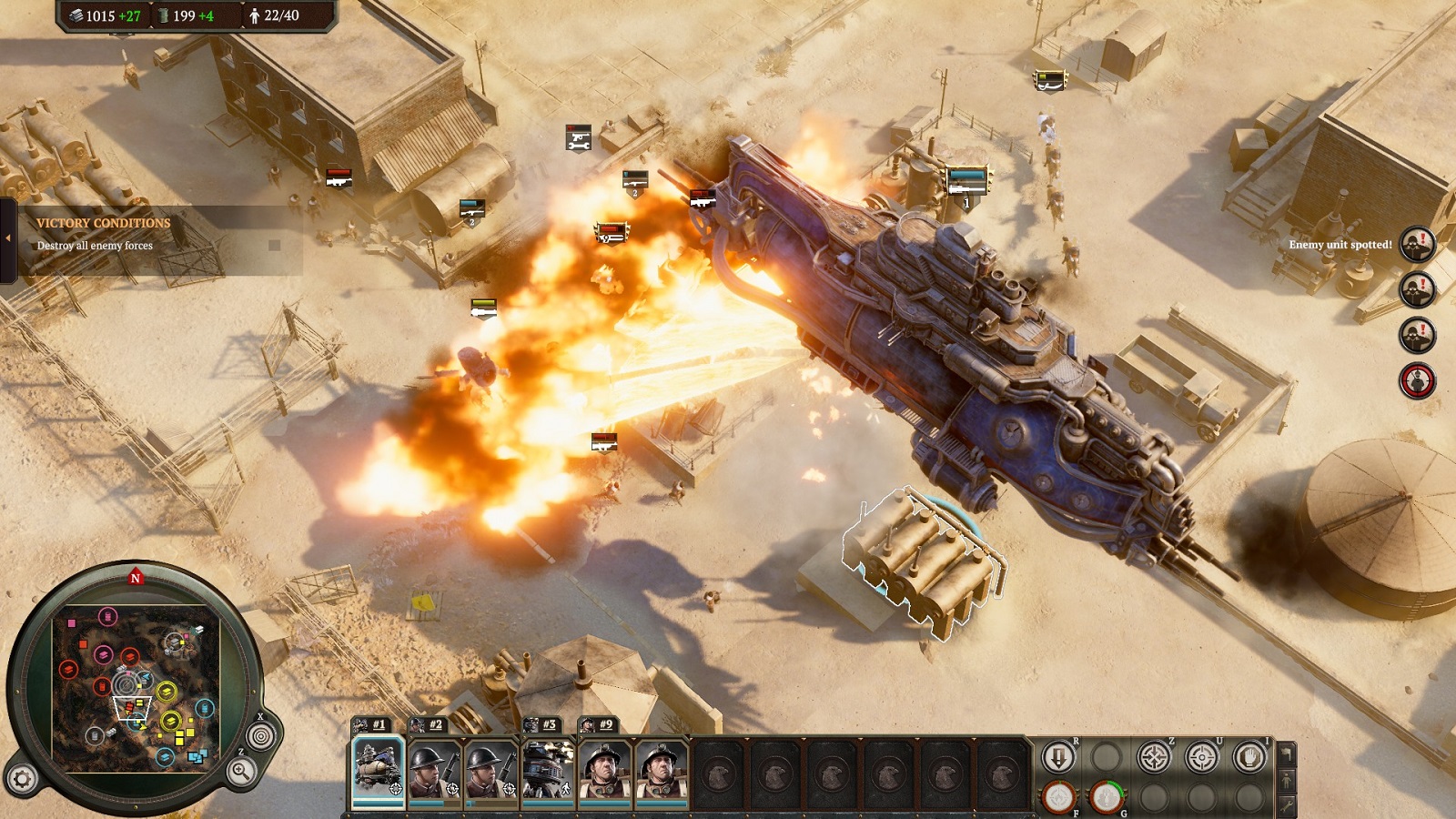 A little overkill, don’t you think?

The campaign opens with leading man William Mason and his forces pushing back the Rusviets in Alaska. It’s business as usual until Admiral George Mason, more interested in investors and imperialism than his wayward son, sees an opportunity to grow the Usonian imperialist machine in Arabia. William is promptly deployed to the region under his father’s orders in pursuit of — you guessed it — oil. One Lawrence of Arabia reference later and William’s fighting alongside the Bedouin tribes to take down their mutual enemy, the king. Key characters return as allies, but the tale of William Mason feels like it exists on the edges of the Iron Harvest canon. Beyond a few references, the Usonia campaign is its own self-contained story.

You’re also introduced to Princess Sita al Hadid, the niece of the king and leader of the tribes. She joins the camp as a circumstantial ally, wary of Usonia’s ulterior motives. She heads the Arabian sub-faction which expands the possibility pool to include assassins, mounted camels, and more. The seven missions center on the tension between William and Sita as much as it does the clash of ideals between William and his father. These three central figures also make up Usonia’s hero units. William’s exosuit makes him a strong, tanky frontline fighter while Sita’s high mobility and abilities make her the perfect scout. Above the battlefield, George Mason mans a massive, albeit slow, airship.

Each mission is a beefy, multi-phased battle with a sprinkle of the novelty and gimmicks of previous campaigns, but much more cohesive and consistent overall. Missions are broken up into stages with tiered objectives. While you might spend the first half of a mission stealthing your way around patrols, the second might have you mounting a large-scale assault on multiple bases. Every engagement offers up a handful of possible approaches, with plenty of room to let your strategist’s brain go wild. I don’t miss the more linear approaches to combat that governed many a mission in old campaigns, though part of me misses the intimate gameplay moments that featured just a handful of hero characters. 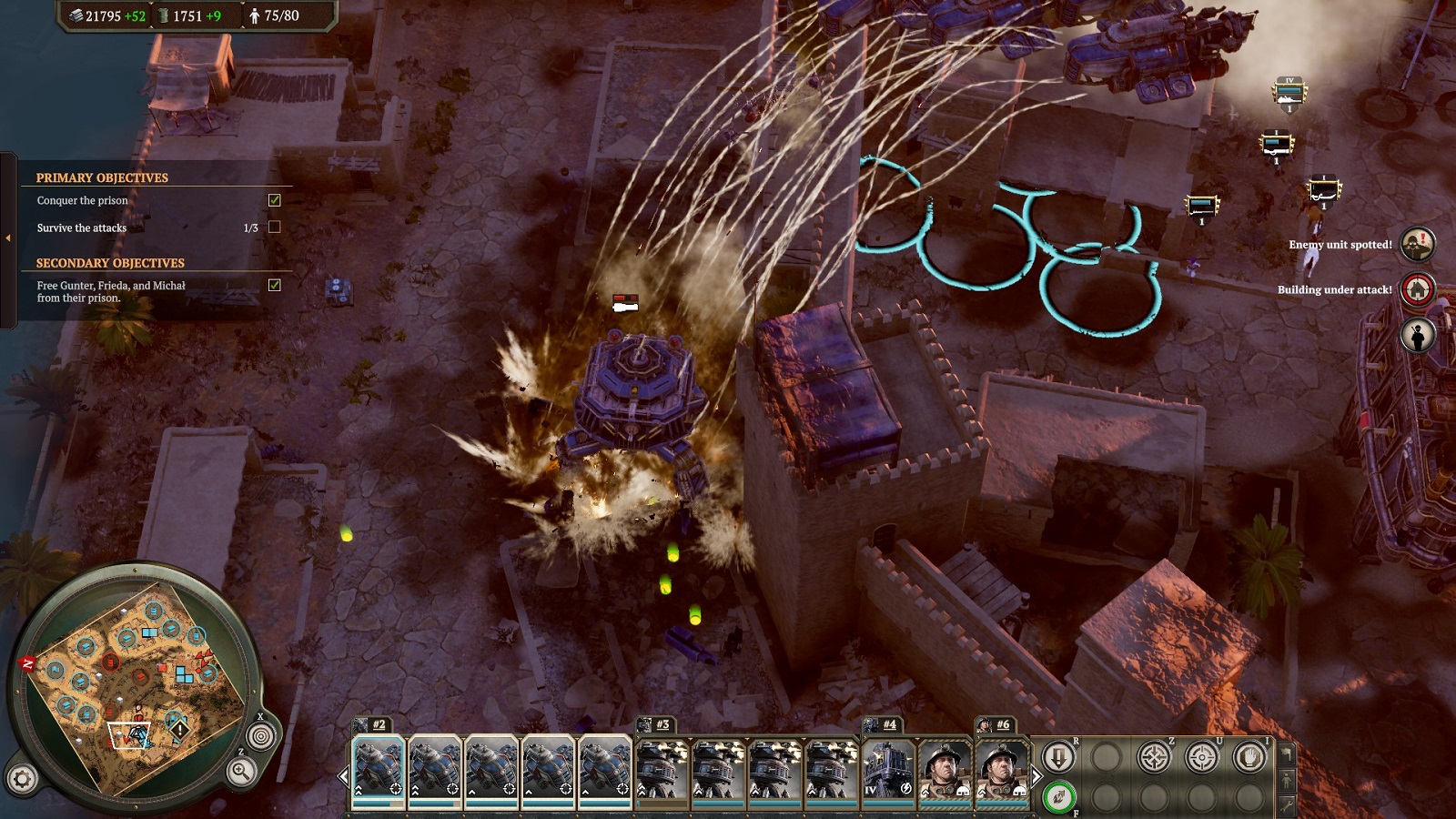 Returning players will know infantry units are fairly uniform across every faction, and Usonia is no different. Each one sports similar infantry types but with a few curveballs to mix up the early-game. Each faction’s three hero units aside, mechs are the real stars of the show. Again, while certain roles have to be checked off the list, mechs vary enough in functionality to encourage unique playstyles. Operation Eagle promises to shake up the dynamics of play by introducing airborne mech units to every faction, but it’s Usonia that dominates the skies.

With the expansion, each existing faction gets three aerial units to play around with: the gunship, sky bike, and airlift. The gunship is a slow-moving damage-dealer with a powerful cannon versus the weaker but more nimble sky bike, while the airlift can transport up to five infantry units across gaps and over obstacles. The uniformity of each faction’s new gadgets doesn’t do all that much to spruce them up. Rather, it’s the other factions that have to learn to deal with Usonia’s air supremacy. The new campaign levels litter anti-air cannons all around the battlefield to ground air units, but in multiplayer it’s on you to figure out how to deal with the myriad missiles raining down on your poor squads. Fortunately, factions get a few new tools to help them deal with the skyborne menaces. The new content hammers home that it’s truly a mech’s world out there, and the only faction thriving as a result of this change-up is Usonia.

The meat of Operation Eagle is its campaign. It offers a simple yet thoroughly engaging story, replayable missions with special challenges, and a smorgasbord of obstacles to overcome with the help of the new aerial units. Iron Harvest’s campaign mode has always been its standout feature, and the Usonia campaign raises the bar with a hefty helping of consistent challenges. The new units, on the other hand, make a less-than-stellar first impression. The battlefield seldom feels the effects of aerial units save for the Usonia faction, which holds the fresh fun hostage from the existing factions.

Operation Eagle adds new pieces to the board but has trouble justifying their existence outside of a challenging new campaign.

A self-deprecating, overly sarcastic pair of glasses that occasionally possesses a human host in order to partake in the delightful process of playing video games, then immediately complaining about them. When he is not playing games (a rare occurrence), he can be found either writing about things that no one cares about, or haunting the quiet streets of his Canadian suburb.
Related Articles: Indies, Iron Harvest, Iron Harvest: Operation Eagle
Share
Tweet
Share
Submit