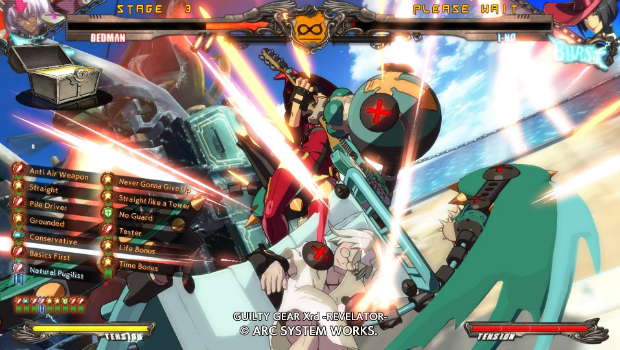 I’m not saying you should become a junkie.  In fact, I am definitively and absolutely saying that you should never, ever become a junkie.  That said, a thick, beefy line of Colombian ambrosial power powder and Guilty Gear Xrd: -Revelator- together would get you closest to the sex, drugs, and rock and roll of the bygone Nineties..  Lou Reed’s dead, baby, and 1990’s version New York City is just a memory: but when you’re in Guilty Gear universe, an immortal, sexy, hard rockin’ violence walks on the wild side.

Luckily for you, clean living reader, you won’t need any drug to feel mentally obliterated and existentially drained while learning to fight in -Revelator-, as the combo system is tough and confusing.You won’t lack for stark and revealing visuals:the colors and animations, both in-game and during cutscenes. The character model and move designs are above A+ grade.  The old and new combine with crystal fidelity to make Guilty Gear Xrd: -Revelator- top of the pops.

Guilty Gear Xrd is a standard 2D style fighting game, operating on a single plane just as the classics in the genre.  Past Guilty Gear games have tried the use of extra planes of movement or changed the game altogether, but with -Revelator- the very basic nature of the game enhances the experience, particularly for older fighting game fans.

Unlike Mortal Kombat X, which found great success embracing more futuristic avenues for fighting games, -Revelator- works hard to capture the exact feel of what many arcade fighting titles provided in the 90’s era of gaming.  Matches are quick, ruthless and deliver pure bouts of skill.  There is a focus on combos and “pugilist” tactics over special moves and powers, but there are still many powers to be unleashed.

After you spend some time coping with the controls, you do get used to the way the game wants you to work while fighting and that can alleviate some of the problems.  You’ll mostly be wishing they were better while accepting them as they are, and when combos are completed correctly and movements become more fluid, the game starts to feel more like a fair challenge rather than a broken control.  That said, the game’s learning curve is a Sisyphean task to master.

Combos are very difficult to learn and decipher, and even harder to complete within range of your opponent.  They are bogged down by a very out of tune set of controls that impede your ability to operate.  The jumps are very hard to understand and use, and even simple dashes forward or back can result in strange effects.  Worst of all, blocking is completed by pressing the D-Pad away from your opponent, which forces you to always be moving backwards while attempting to block.

Most all of the classic Guilty Gear characters are present, including I-No, Ky Kiske, Faust, Sol Badguy, among others.  Each character is fully animated in a 2D anime style and brought to life with modern cel-shaded graphics, and the character design is off-the-charts.  There’s not much in terms of dynamic action in different stages, but that’s no problem. Each and every single fighter and level is outstanding, which truly is a rarity.

The backgrounds felt alive and part of the action, even in small ways. A great example of the special quality in level design came with a fight in front of some sort of union building, or worker’s bunks, with laborers coming home after a long day.  Here we are, two punk fighters with a personal grudge, and as the fight started the workers in the background started fleeing, or complaining as if to say “Really guys, here?”.

Guilty Gear Xrd -Revelator- itself is pretty basic, with a pre-story mode, story mode, and common fighting modes and practice options you’d expect with any decent, regulation fighting game.  Story flow is designed so that the pre-story “episode” mode should be played before playing the true story mode, as the story mode will be slightly different based on choices found within the prologue.  Playing through the episode mode after you’ve beaten it will give you a slightly enhanced version of the story.

The online section of -Revelator- is different to the overall look and feel of the main game, but it serves has a hub for all things single and multiplayer, which gives you so much more flexibility than other online lobbies for fighting games.  You aren’t forced to leave the lobby to play the main game modes, and you can always come back to the online action at any time.

-Revelator- boasts a three-tier online lobby system, with the general lobby serving as a community hub with news and interactions, as well as versus exhibition matches.  The general lobby also allows players to “fish” for unlockables like costumes, emblems, and other items.

The most well designed is the second tier, known as “player matches”, where “make it, take it” rules apply and players can line up to replace the loser, making finding fights to take part in much more streamlined than just searching for opponents wildly.  Ranked matches compose the third “tier” of online play, and are serious battles with world ranking implications.

Lastly, but certainly not least in a Guilty Gear title is the music.  Known for a hard, heavy, and loud soundtrack, -Revelator- does not disappoint. With a deep soundtrack that matches the fast-paced action with screaming guitars, pounding drums, it transmits the absolute soul of Japanese speed metal.  It rocks, end of story, and that basic tenet could really apply to the entire package presented with this absolute gem.

Guilty Gear Xrd: -Revelator- is a nostalgic look back on the golden age of fighting games that also manages to wrangle a ton of modern digital beauty and function into the mix. The result is a top notch fighting title that begs to be mastered. That mastery will not be an easy ride, but with the gorgeous design, heavy music, and plenty of fun, it will be easy to overlook the very frustrating, but minor control issues. Lay off the junk, and run to the sexy rock- and- roll violence of Guilty Gear Xrd: -Revelator- instead.

Patrick Rost has been with Gaming Trend since 2013. At first focused on sports coverage, Patrick has gone on to cover a wide range of games and other products for the website. Outside of Gaming Trend, Patrick writes and records music, grinds perpetually in Elder Scrolls Online (PS4), and lives day to day with his two dogs, Bob and Stella.
Related Articles: Guilty Gear Xrd -REVELATOR-
Share
Tweet
Share
Submit