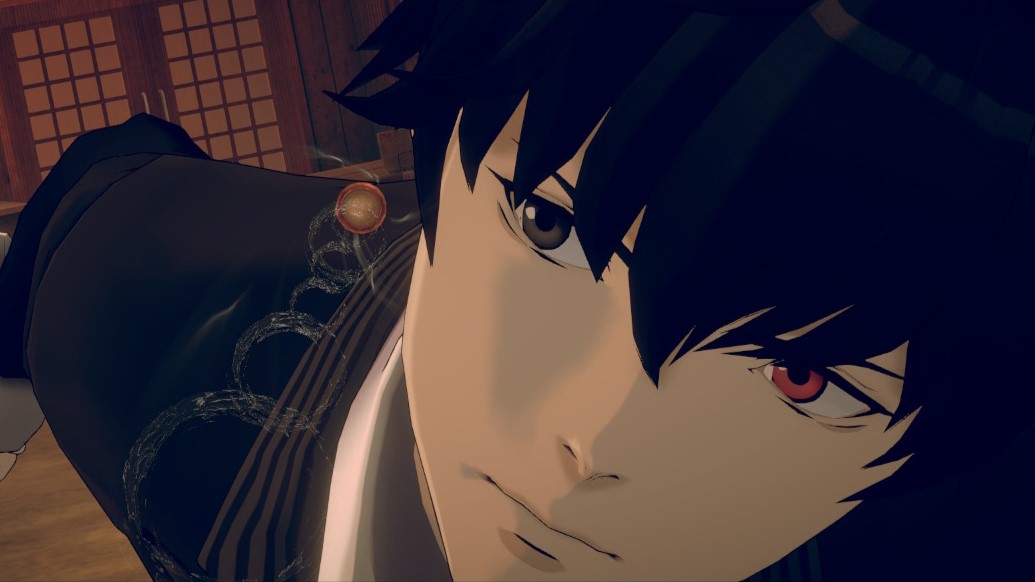 Jin Furue’s body has been found for the second time. Six years ago, the left half of his body appeared suddenly on a gameshow livestream with a QR code leading to a strange video embedded in his corpse. In the present, the time of death for Jin’s right half is only a few hours ago. Using technology that allows officers to dive into people’s unconscious, ABIS members Ryuki and Mizuki must uncover the truth behind the Half Body Serial Killings across two time periods.

Somnium Files’ gameplay is likewise divided into two halves: real-world adventure game segments, and Somnium stages. In adventure mode, you look around locations from a first-person perspective, examining objects, talking to people, and gathering clues. As the title suggests, you also have the help of an AI companion in the form of an AI-Ball in your left eye socket. Tama can assist Ryuki by talking things through or using one of many special viewing modes like X-Ray vision and Thermals. While these are context sensitive, you’ll more often be able to use the new Wink Psync mechanic on characters you suspect are hiding something, allowing you to view their Somnium for six seconds.

When you suspect someone is hiding something and talking won’t get you anywhere, you’ll take them to the Psync Machine. Here, you’ll be able to dive into the suspect’s Somnium for six minutes as Tama. You can move around in a 3D environment to solve literal dream logic puzzles, but you always need to be aware of that timer. Standing still will slow time to a crawl, but moving around and interacting with things will use up time, so you can’t just screw around or trial and error your way through. To help with time management, you’ll occasionally come across Timies – special programs that allow you to compress time for a single action. However, there are some Timies that will hinder you and make time pass more quickly, so you need to be strategic in their use. 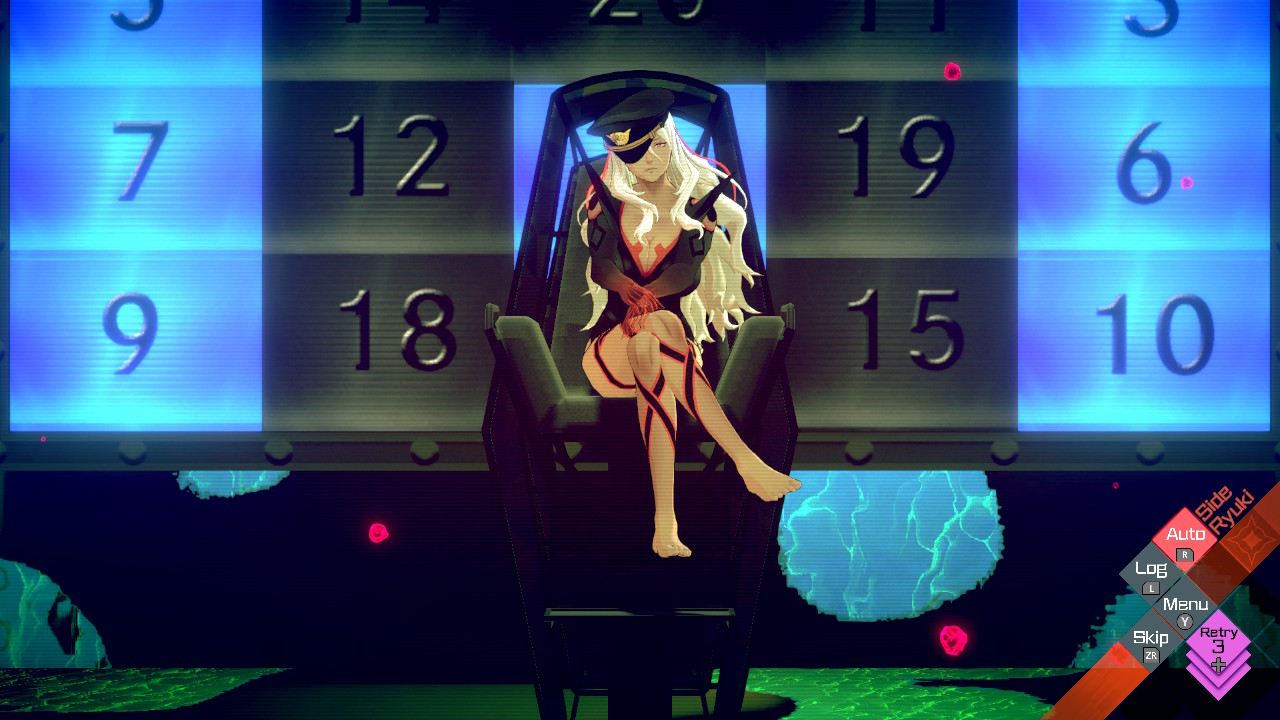 There are a few new mechanics to utilize on your way to unlocking Mental Locks. Chief among these are Keys. As you interact with the Somnium, you’ll slowly reveal phrases that hint at how the character’s Somnium works. These can be pretty hit or miss depending on the level, but you can view them at any time along with a handy chart showing your current depth in their mind by pressing in on the Left Stick. Certain Somnia will also allow you to fly around, which can be pretty neat and even be used to solve a puzzle or two.

You may come across Conscious Antibodies in your dives, which will block access to important information and drastically reduce your time if you go near them by a full minute or more. Needless to say, you want to stay away from these but that’s easier said than done at times as some will move around or even chase you. If you do run out of time, however, you can easily reset to checkpoints after locks using up to three of your retries. A lot of puzzles in Somnium require you to do certain things to uncover a solution like a numerical code or password, so if you’re really pressed for time near the end you can simply start over and input the solutions straight away. This is crucial if you’re going for the clear times too, which unlock new outfits for Tama and Aiba if you have more than one second left on the clock by the end.

As you explore Somnium, you’ll come across eyeballs hidden throughout the level. There are a total of five in each stage, and each gives you eyeball points to use in the bonus menu to purchase new outfits, concept art, and more. These, along with the clear time, are a really fun way to encourage replayability in what’s a fairly linear game.

While AI is mostly linear, you’ll occasionally have two paths through a Somnium which will drastically change events after you clear the level. While only one route is canon, you need to play through all of them as they contain crucial information to the case and oftentimes the answers to another route in a Somnium. That may be familiar to you if you’ve played another of Spike Chunsoft’s series, Zero Escape, and nirvanA Initiative actually has quite a lot in common with those three games in terms of themes and puzzles. So much so that I almost want to call this Zero Escape 4, but I digress. 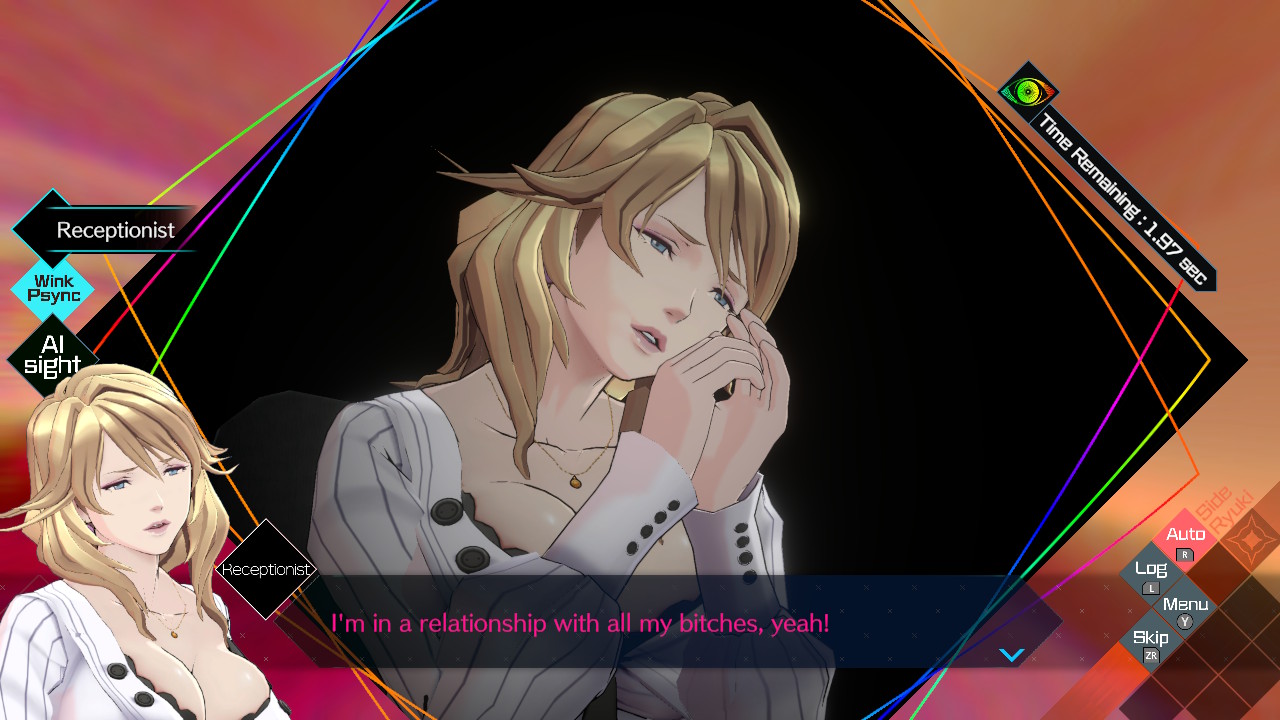 Back in the real world, occasionally you’ll need to reconstruct a crime scene through the new Augmented Reality investigations. These allow you to walk around an area as Ryuki or Mizuki to find clues or reconstruct the killer’s path. While I do still wish you could use the different sights in Adventure mode more freely, you have almost full reign here swapping by pressing in the left stick. This also gives you a bit of a palette cleanser between Somnia, with puzzles that use actual logic instead of dream rules. You’ll be doing a lot of math and converting between letters and numbers for some tricky puzzles that will really bend your brain. I was stuck on one for about two days (which is why this review is a bit late), but that was mostly because I made a stupid mistake in implementing my initial solution. Once you’ve figured everything out, Tama or Aiba will film you as you act out the part of the criminal for… some reason.

If that wasn’t an indication, Somnium Files is just about as hilarious as it is dark. Recurring gags like not being able to remember Kagami’s name or Tama and Aiba being obsessed with a receptionist’s huge breasts are back in full force here, along with a ton of other new puns and jokes throughout the game. The humor doesn’t punch down either, there are multiple LGBTQ+ characters such as Mama who actually manages to make funny jokes about trans people. What a concept! The humor helps endear you to each of the wacky characters and learn more about who they are, what their goals are, and eventually how to solve their Somnium. 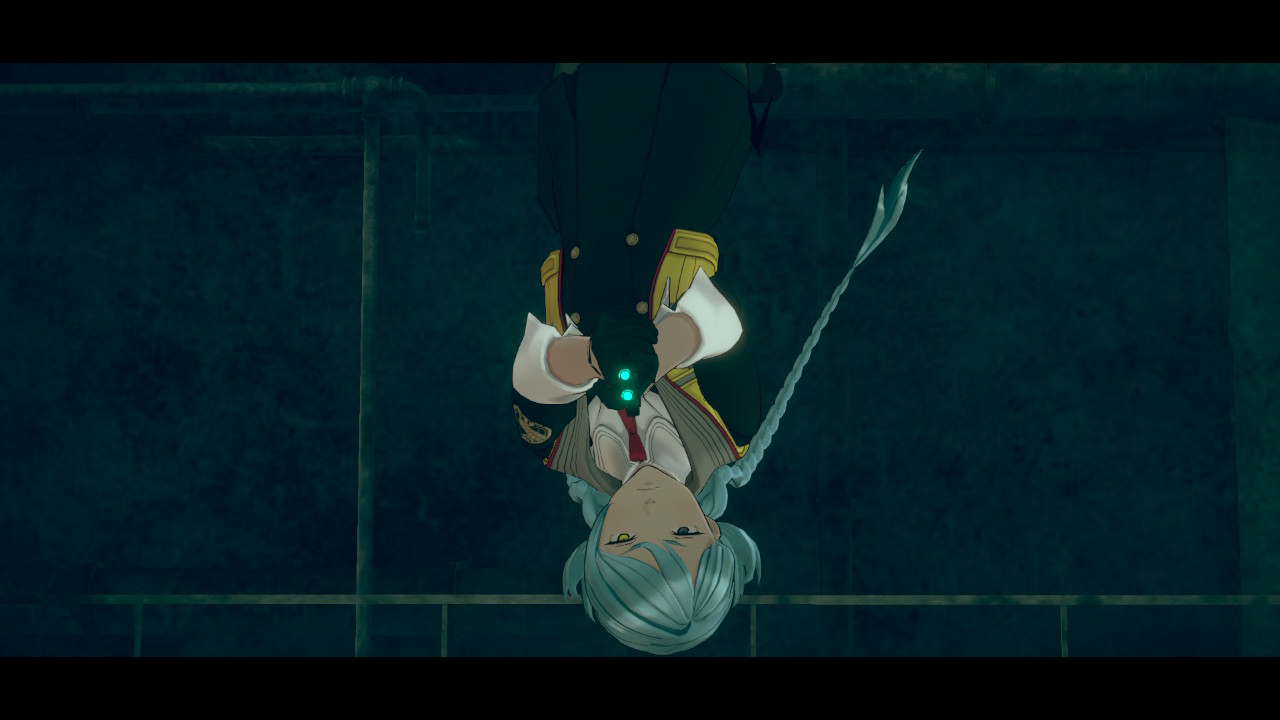 While the characters are a big draw for AI, especially with a fantastic English dub, the story is equally so with all its bonkers twists and turns. There’s a ton of foreshadowing here that makes you wonder how you didn’t see certain story beats coming dozens of hours away. The central mystery is resolved in a very satisfying way, though the path to that is pretty bumpy once you reach the central twist. In particular, there’s one aspect that should have had more focus on it, and because of this lack, I actually thought the twist didn’t make any sense. I figured it out after a few minutes and a bit more dialogue, but even after that it still actually gave me a headache processing all of this. For real, this game’s twist caused me physical pain it was so complicated and interesting.

As great as nirvanA Initiative is, there are more than a few issues that hold it back from its true potential. Keep in mind that I played before release and there’s a day one patch coming, but the game crashes very frequently. AI pushes the switch past its breaking point and doing certain things like opening Tama or Aiba’s room to change their outfits or receive counseling (Ryuki is not OK) or even playing the Tamagotchi minigame would often result in an error message and getting booted back to the Switch’s home menu. I assume the game is more stable on other platforms like PC because the framerate here is all over the place. It can very rarely reach 60, but you’ll usually experience sub 30 with some skips in frame pacing, especially in the action scenes. 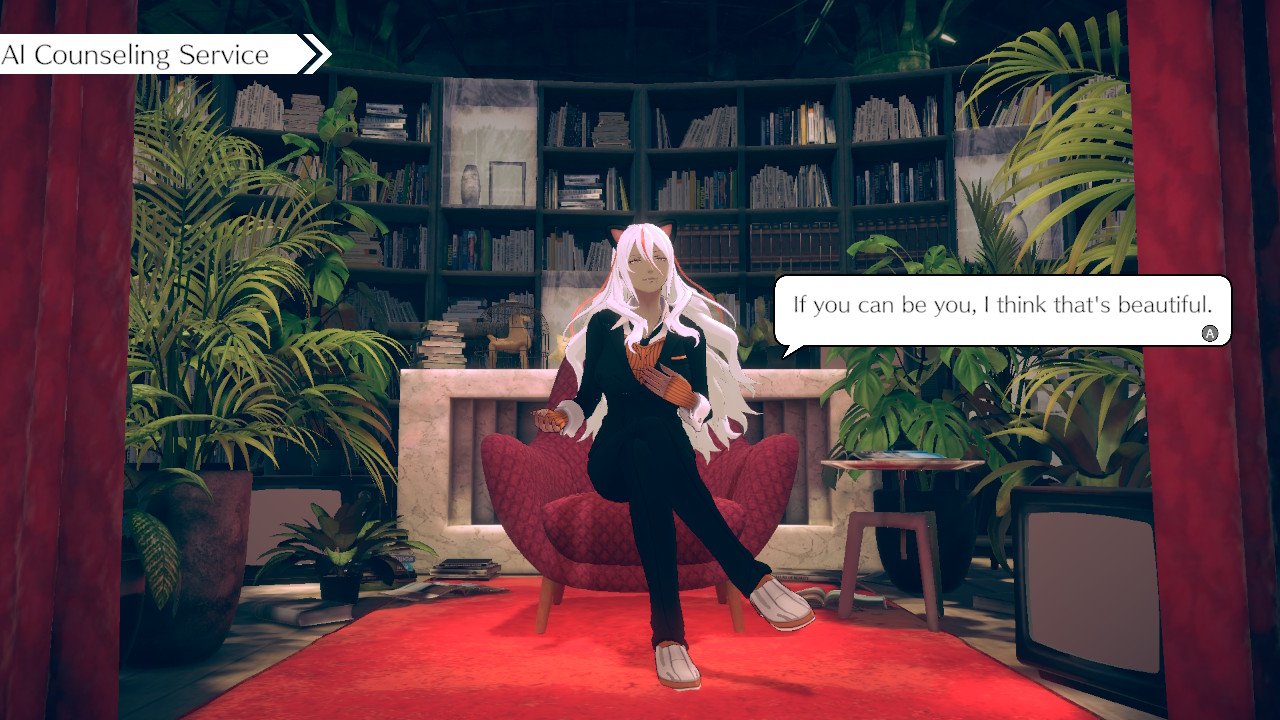 There are moments in the story where you have to fight, and you need to perform QTEs to continue. The QTEs themselves are inoffensive and you can even tweak their timing separate from the puzzle difficulty, which is nice, but the action itself often tanks the framerate it’s so over the top. In fact, they can be so silly and weird that it’s hard to take seriously – even when a character is literally dying in someone’s arms. Mizuki has super strength, but even then sometimes it feels like they just inserted her into a Dragon Ball Z fight. I enjoyed them on their own, but in the context of the game, they sometimes don’t fit.

To top it off, I also experienced quite a few glitches like Timies not displaying the reduced time correctly, voice lines not playing, and the ending pre-rendered movie was shockingly low quality. I hope they can iron these issues out because this is once again an incredible achievement in video game storytelling.

Spike Chunsoft has done it again with AI: THE SOMNIUM FILES nirvanA Initiative. They tell an incredible murder mystery that’s a ton of fun to figure out, all while solving brain-bending puzzles and talking to a colorful cast of endearing characters. There are a lot of performance issues and bugs, but those are nitpicks compared to just the sheer joy of diving into people’s minds to solve the case.

David is the kind of person to wear his heart on his sleeve. He can find positives in anything, like this is a person who loved Star Fox Zero to death. You’ll see him playing all kinds of games: AAAs, Indies, game jam games, games of all genres, and writing about them! Here. On this website. When not writing or playing games, you can find David making music, games, or enjoying a good book. David’s favorite games include NieR: Automata, Mother 3, and Gravity Rush.
Related Articles: AI: The Somnium Files - nirvanA Initiative
Share
Tweet
Share
Submit