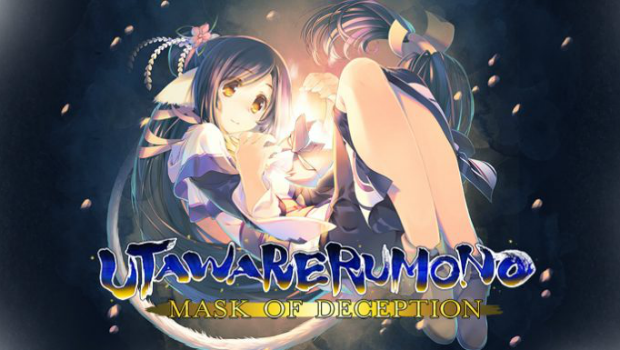 When I see a term like “visual novel” I expect the visuals to capture the ongoing storytelling, allowing me to just sit back, take it in, and feel the entirety of a story as I play through the game. Tell me that this will be accompanied by a sweeping score and breathtaking visuals, and I will become very excited. Add to the mix that we’re also going to have a immaculate tactical RPG battle system to enjoy, and I’m practically boiling over with anticipation.

Then, like a rushing rain from an angry sky, Utawarerumono: Mask of Deception descends and rapidly destroys that excitement. In its stead, you find a cold boredom that only the worst of cutscene designs could provide, stretched to an extent that is so ridiculous that it may be a cruel joke being played.

Cold, alone, and confused, the protagonist wakes up in a empty field with no discernable memory. Hungry, lost, freezing, and with only a medical gown to cloak him, he begins to traverse the landscape before him. A large insectoid monster spots the boy and begins to chase him into an underground hole, but before the monster strikes, an even larger, amorphous creature snaps the insectoid up, eating him whole. The boy is terrified, lost, weak and alone, until a strange girl rescues him from danger and escorts him to a place of comfort, shelter, and safety.

Utawarerumono also suffers from some cliches, but the story actually does have some slightly interesting twists. The dynamic between the main character who is very weak and useless, and his girl companion who is capable, strong, brash and gregarious is a fresh, if not a little on-the-nose mixup of the normal JRPG dynamic.

The game focuses on the story of these two characters as they move through the world, meeting people and gaining companions along the way. The story is told through cutscenes where you are completely passive to the “action.” You are just there to push X and be quiet. The cutscenes are just more of that basic, static characters on a static, lifeless background, reminiscent of paper dolls doing a puppet show.

The high levels of monotony with the images is accompanied by so much text that the novel aspect certainly seems to take top billing over the visuals. Not only do you have to read through the dialogue for each character, but this game also found it pertinent to include the little asides that the main character has, musings on where his elbow is, or where he might walk next, or if he scratches something.

All of this adds up to hours and hours of time spent reading dialogue that teeters between passable and laughable, seeing the same two or three images of the characters over and over again on a background that changes maybe once or twice. Then you’ll get to enjoy a battle in the game and you’ll start to feel alive again, as if a pale wind of boredom had finally whisked away. Could this be the moment this game finally begins?

The battles are very fun and well polished. Done in a tactical style with characters and enemies on a grid, the battles feel both classic and fresh, with that tried and true style being implemented with a fluid and active critical hit system. When you choose to attack, the attack comes with a simple task like hitting a button when a meter fills or at a specific point that turns the attack critical, and may allow for a second strike within a turn.

The battles can be as simple as killing everything on the map, but there are also interesting alternative ways to win, such as leading a creature far too powerful to defeat off of a cliff. I thought these battles were simple to learn but very fun and well paced. Tactical RPG battles are a hard thing to mess up, but these are particularly well executed.

Just as you start to enjoy yourself, however, you’ll be led right back into a series of cutscenes. This was jarring for me the first time, having spent well over an hour and a half before the first battle. I thought I might be entering into a more active portion but was let down by the more of this “visual novelization” that ended up lasting for hours on end.

Even with the fastest text scroll options, and several instances of just skipping past dialogue, these cutscene portions of the game would last 3-4 hours at a time between battles. It quickly goes from laughable, to painful, to brutal, and all-in-all I figure I only played 20 real minutes of gameplay within the first 20 hours of my playing the game. Things do get a little faster paced eventually, but things never really become open or free of the onslaught of text.

I understand that the idea is to make a video game that feels like a manga comic, where you are reading through the story with some brief interjections of fun. The artwork is pretty and very stylish but isn’t much to call home about in terms of the anime motif.

There are few unique frames, with the same art being recycled over and over again, and the emotions of the characters are only conveyed through surface indicators on their static, 2D character models. If the excuse for this game to be so packed with text and story is that it is supposed to be a reading adventure like a graphic novel or manga, then I can tell you the better option is just buy a new graphic novel book instead.

If the novelization and art isn’t compelling enough for most fans of the medium, and the actual gameplay is far too sparse for JRPG fans, the question of who and what this game is for becomes valid. It is difficult to look at Utawarerumono and just completely dismiss what is a hodge-podge of nice artwork, decent story elements, and a great gameplay system as terrible, but it is also difficult to imagine a game less compelling.

Utawarerumono: Mask of Deception is a text based adventure that masquerades as a tactical RPG. There are hours upon hours of low-grade, simple cutscenes with countless lines of text that you’ll be reading instead of playing a video game. There are elements of this title that shine through the darkness of boredom, but there are few who can stomach the ride finding them.

Patrick Rost has been with Gaming Trend since 2013. At first focused on sports coverage, Patrick has gone on to cover a wide range of games and other products for the website. Outside of Gaming Trend, Patrick writes and records music, grinds perpetually in Elder Scrolls Online (PS4), and lives day to day with his two dogs, Bob and Stella.
Related Articles: Utawarerumono: Mask of Deception
Share
Tweet
Share
Submit