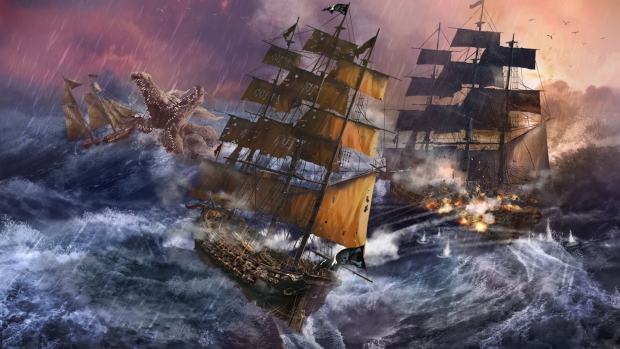 Tempest is an open-world seafaring adventure, casting you as customizer, cannoneer, and course charting captain. Part RPG and part resource management simulation, Tempest looks to put a tricorn hat back on our head and reinvigorate the pirate genre.

Thankfully, Tempest is fairly seaworthy, even if it has a few barnacles.

The pirate genre has been drastically underserved for decades. If you look at what most people keyed in on for Assassin’s Creed IV: Black Flag, it was the excellent naval combat. Fans begged Ubisoft to give us more swashbuckling action, but it simply wasn’t coming. If you wanted a robust pirate adventure you’d have to reach all the way back to 1987 and the many iterations of Sid Meier’s Pirates. While that game is available on Steam, the controls are fairly busted and fixing the resolution requires a lot of hacks and introduces instability. Clearly this is a very underserved genre that Tempest is attempting to tackle.

The world is open for you to explore.

The reason I mentioned Assassin’s Creed and Pirates! Is because Tempest borrows heavily from both, with a bucket customization from Pirates of the Burning Sea. All of these focused heavily on the best part of pirate games — naval combat.

Setting sail on a somewhat small map, you are given full roam of the open seas, operating as you see fit. Will you use Letters of Marque to seize assets from nations at war with your allies, or will you hoist the Jolly Roger and attack everyone for fortune and fame? Hidden treasures, rumors of mythic monsters, and a variety of skullduggery await you.

Given the open nature of the game, the player is free to operate as they see fit. There are eight factions in the game, including pirates to manage. Balancing these is key as they determine aggression levels from your foes, as well as whether certain missions are available. It also determines how much goods cost at any port of call. Attacking everyone means you’ll be paying a lot more for repairs and booty at anywhere your ship berths, but weighing anchor in friendly ports provides discount and the opportunity for commerce and trade.

Harbors for trade and commerce

When you engage an enemy, you are given an opportunity to auto-resolve the combat by simply hammering the button labeled such. While this does offer a speedy resolution, you miss the primary lure of Tempest. Attacking the enemy gives you a third person overhead view of the action, allowing you to crest the whitecaps and outsail your foes.

Much of your success in combat comes from your crew. While having a powerful ship is important, having efficient and seasoned mates determine maneuverability, speed, ability to manage emergencies like fire and torn sails, as well as reload time.

There are a dozen skills to upgrade.

Your personal skills as ship’s captain also require a practiced hand. There are twelve skills to improve in all, though each pair overlaps with its neighbor, so taking one will block you from taking the other — choose wisely. When you’ve amassed 50 xp you can “write in your ships logs” giving you a point to spend on your skills. Each skill has four levels of upgrade, providing additional targeting speed, ram power, and more. Beyond these active skills, the way you sail also determines five reputation skills. As an example, because I tend to stab other ships with the prow of mine, I earned a skill that adds triple damage to my ram attack, causing fear and panic on the recipient’s bridge.

The interface can be somewhat clunky.

Your ship can be customized extensively. New flags, sails, hull, prow, cannons, and much more allow you to slowly create the ship the way you want it. Beyond the usual, you’ll also pick up mystical artifacts. Artifacts take the otherwise normal pirate adventure and bump it a notch towards strange. One artifact I found uses a force field to repel cannonballs, and another more mundane one is simply a mortar launcher for your ship. Occasionally you’ll even sail up to port and see giant light-emitting monoliths flanking a city. There isn’t an over-arching Assassin’s Creed-like future-tied subplot going on here (or one that I’ve yet found), I just think the developers were unsure of how sci-fi they wanted to make Tempest.

As you upgrade your boat, you’ll eventually be able to conquer the forts that dot the landscape. These are difficult battles as the stationary structures are sturdy and more than capable of bombarding your boat long before it can close distance. Mortars will help, but you’ll need upgrades for your hull to withstand attack, and faster sails and agile crew to out-maneuver the barrage. The ability to angle the guns forward and rear to a small degree comes in handy as well.

Artifacts vary from mundane to arcane.

One of the things that I found interesting, but sadly underused, are the constellations on the horizon. In the evenings you’ll see stars connected by blue light beams that outline the signs of the zodiac. There are a few missions that require looking at them, but all objectives are also highlighted with a huge blue outline, so it’s fairly easy to ignore.

There are still a few bugs, now three patches into launch. Clicking on what appears to be my ship log results in a message that says “WrightNotEnought”. My missions show up as blank, as does my task list on what to do next. Closing the game and firing it up again clears the issue, but I also had this problem more than once. Similarly, some of the descriptions are just lacking. What is Patch_3 in the store? It looks like some water splashes on the icon, but I can’t readily identify what it does, and I’m not paying 3700 gold to find out. Similarly, Nose_2 looks like it adds a vicious set of spearing horns to the front of my ship, but with no further description than that, it’s hard to want to spend the hard-earned gold to figure that out for myself.

When the information is filled in (and working correctly) the game provides a host of information on what each upgrade will add to your ship. Some cannons allow you faster aiming, others grant more power at shorter distances. A shiny new compass gives you a +1 to “Manoeuvre” and somehow expands your hold by 50. It’s a little odd, but at least I can piece out what that does.

The lategame of Tempest allows you to make your ship the scourge of the sea. Mortars, flamethrowers, shrapnel bombs, and more let you tackle the legendary ships that roam the map later on. Little, however, will prepare you for the mythical creatures. Kraken, Leviathan, and others lurk beneath the surface, ready to drag you to Davey Jones’ locker.

There are a few bugs to contend with.

There is one combat action that I found frustrating — boarding. To eventually swap out your tiny galleon for a larger berth, or to capture the bulk of loot and artifacts, you’ll have to board ships. The boarding mechanics are clunky at best, and it’s very easy to instead accidentally sink ships before you can grapple them.

An odd sci-fi slant in this game….

Tempest is available for just $15 and it scratches an itch few other games do. It’s a capable, if somewhat buggy, pirate adventure that offers up challenging combat and an open world to explore. Customization and late-game challenges courtesy of legendary ships and mythical monsters help round out the title, making it worthwhile if a little frayed around the edges.

Ron Burke is the Editor in Chief for Gaming Trend. Currently living in Fort Worth, Texas, Ron is an old-school gamer who enjoys CRPGs, action/adventure, platformers, music games, and has recently gotten into tabletop gaming. Ron is also a fourth degree black belt, with a Master's rank in Matsumura Seito Shōrin-ryū, Moo Duk Kwan Tang Soo Do, Universal Tang Soo Do Alliance, and International Tang Soo Do Federation. He also holds ranks in several other styles in his search to be a well-rounded fighter. Ron has been married to Gaming Trend Editor, Laura Burke, for 21 years. They have three dogs - Pazuzu (Irish Terrier), Atë, and Calliope (both Australian Kelpie/Pit Bull mixes).
Related Articles: Tempest
Share
Tweet
Share
Submit