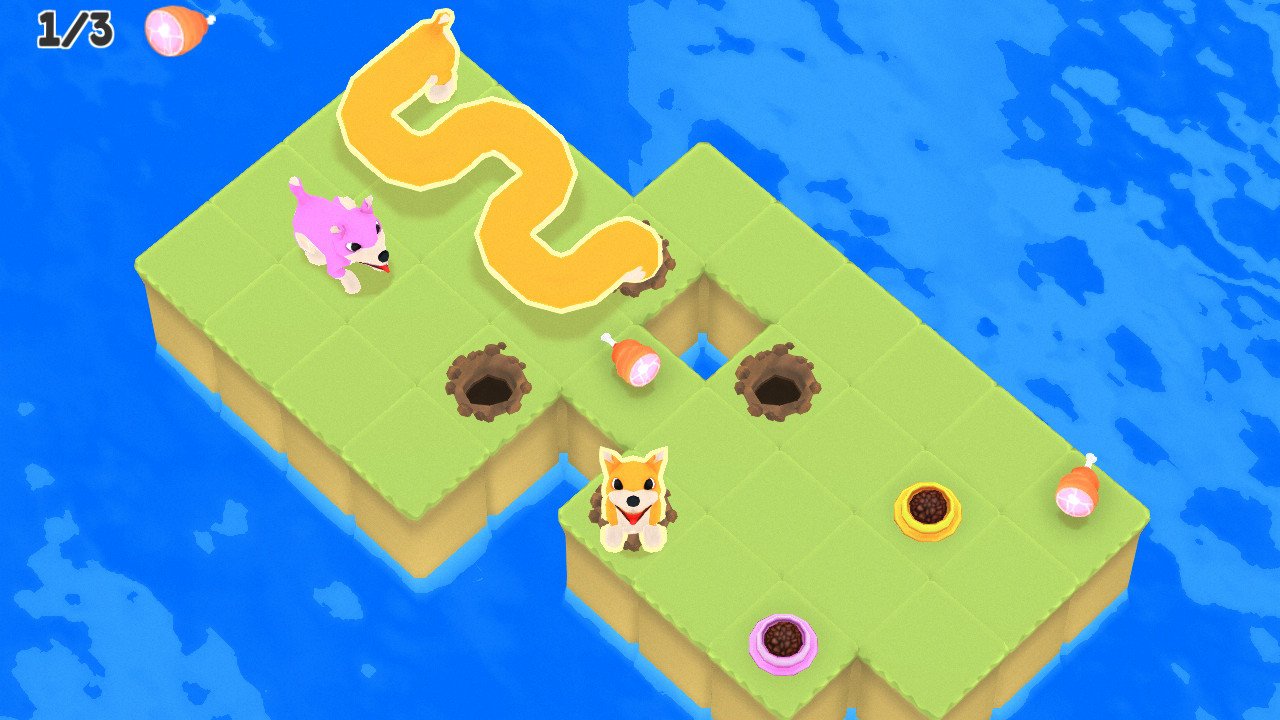 What’s cuter than stretchy puppies? Not much, but that’s the aesthetic that Puzzle Puppers aims for. A simple yet charming title, this $5 game might not have too much after a while, but it is an entertaining puzzler with some endearing pups.

Puzzle Puppers tasks you with leading different colored dogs to their respectively colored dog food bowls. They can stretch out throughout the whole stage, but can’t overlap, which means you’ll need to strategize and plan your moves so you don’t get trapped. Think of the mobile game Flow, but instead of pipes, you have dogs. In addition to the dog bowls, you can collect some bonus hams littered across the eighty stages in order to get up to three hearts (much like a mobile game, collect enough of them and you can reach some harder bonus stages).

From holes to waterfalls, there’s enough here to challenge puzzle veterans but also make the experience enjoyable for beginners. For example, some levels have multiple dog bowls of the same color, but only one bowl will create a path to all the hams; you’ll need to think outside the box for some steps, and it’s this kind of thinking that contributes to the relaxing puzzle atmosphere of the game.

The core puzzle mechanics of Puzzle Puppers are easy to learn but difficult to master, especially near the end of the eighty levels if you’re aiming for all of those steamed hams (in case you’re prepared for an unforgettable luncheon!) The game doesn’t dip in its framerate, and the Switch’s touchscreen is utilized well here; you can click and drag the dogs to their destination, or use the Joy-Con to direct your dog’s steps. You can easily restart and undo previous moves, so you aren’t totally out of luck if you accidentally make a mistake and need to go back a few steps.

While the technical performance is excellent, the graphical quality feels decidedly last-gen; the 3D rendering and ¾ top-down perspective feels a tad dated, and it shows when playing the game in docked mode. In addition, there isn’t much variety with locations or worlds; each level takes place on the same island-like setting, complete with water around the island. If you’re expecting a puzzle game that’s a narrative epic, this isn’t it. That being said, the price point is very suitable for a game like this, and you’ll get your money’s worth due to the cute charm of the dogs (which exude a sense of loveable charm), and the basic but challenging gameplay mechanics.

It’s not going to set the gaming world on fire, but Puzzle Puppers is a nice little game to work your grey matter on the Switch. It helps that its puppies are adorable.

Elisha Deogracias is an aspiring accountant by day, freelance writer by night. Before writing for Gaming Trend, he had a small gig on the now defunct Examiner. When not being a third wheel with his best friends on dates or yearning for some closure on Pushing Daisies, he's busy catching up on shonen manga and wacky rhythm games. Mains R.O.B. in Smash. Still doesn't know if he's a kid or a squid.
Related Articles: Indies, Puzzle Puppers
Share
Tweet
Share
Submit