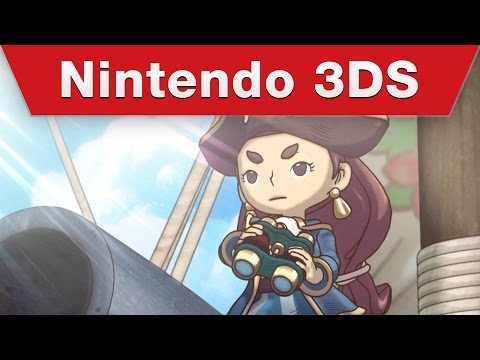 Now, I love a good dragon slaying or eldritch defeat like everyone else, but there’s more to questing than simply stabbing kobolds in the face. What about all the potions and items you have to consume? What about the swords and daggers and shields and helms you need to fight off those monsters?

There’s a whole craft behind making the things that adventurers use to fight evil, and most of the time it’s all relegated to a simple shopkeeper and a series of menus. Fantasy Life seeks to get you in touch with the full scope of adventuring—not just questing for treasure and defeating bandits and evil yaks, but in the art of creation.

Then I realized why fantasy games don’t focus on those jobs. It’s because they’re jobs. Gathering materials, crafting items, selling them for more stuff—it’s all laborious, back-breaking work, filled with constant fetching, list checking, and grinding to get better items. In Fantasy Life, taking on the role of a blacksmith or a cook can be a zen-like process, but when the narrative reason to continue is so thin, it gets harder and harder to continue to pick up that smithing hammer. Or soup ladle. Or, yes, even that broadsword.

In Fantasy Life, you have 16(!) different jobs (or, as the game refers to them, Lives) to choose from, and you can switch back and forth between them at any time. There’s the alchemist, who can brew potions; the paladin, who uses a sword and shield combo to mete out justice; the tailor, who can make all kinds of clothes and cloth-based items; or the fisherman, who, well, you know.

At first glance, each Life feels completely different from one another, and yet symbiotic in a way. You need the metal provided from the miner, the wood gathered by the woodcutter, and other various items from other classes in order for the blacksmith to actually make anything worthwhile. It’s a neat idea, but it’s hamstrung by some really asinine design decisions.

There’s so much back-and-forth required to make any headway in each Life. You’ll constantly find yourself checking your quest logs and item lists in order to earn the experience you need to grow in your class. Head out to the field, kill some bad guys, gather some items, head back to the city, craft those items, complete the quests, head out to the field, and so on. It wouldn’t be so bad, but you can only complete quests for the Life you currently have equipped. You’ll still be able to use the abilities you’ve unlocked (cutting trees as a mercenary, for example), but you won’t get credit for the tree cutting unless you’re currently employed as a woodcutter.

This creates yet another layer of back-and-forth traversal, in which you have to go back to the guild office, change out your job, and run back into the field to complete more objectives. A fast-travel system certainly helps, but you’ll still be spending most of your time in areas way after you should have left them, just to get the rest of your Life levels up to the point where the items you can make are in line with your ability level.

Not only that, almost every single item-creation job features the same exact minigame whenever you create an item. You’re tasked with completing a series of button presses (press A at the right time, mash the A button, or hold A) in a certain amount of time, and how fast you complete it and how accurate you are determines the quality of the item. But, whether you’re making shirts or metal breastplates, each Life requires that you perform those same actions over, and over, and over again. It’s kind of neat the first couple times you do it—after a few dozen, it quickly wears out its welcome.

The combat classes fare better, though it’s not revelatory by any stretch. Attacks vary in speed when you equip different items, and each weapon has its own special moves and combos to perform (which, of course, are learned only when you get the proper rank in the specific life. Everything just feels so basic, that no one part of the experience truly stands out.

Even resource gathering is a slog, as you perform the same menial tasks repeatedly to get the necessary items to complete each quest. Items are all dropped randomly, so a quest that requires that you grab three Topaz off of some specific mining veins in a specific location could take hours, as those precious gems aren’t guaranteed to drop—or even respawn when you leave and come back. All of it leads to a soul-crushing sense of repetition, like Sisyphus pushing that damned rock up the hill, only to see it crash down moments later.

Even with the issue with the classes, even with the repetitive nature of the game, and even with the workmanlike quality of the actual gameplay, it wouldn’t be so bad to just while away a couple hours at a time. Seeing your items come to life after some gathering and a few button presses is still a neat feeling, as you see all of your work pay off with a sweet new set of gear. When the story gets in the way, everything falls apart.

Every single Life has an intro quest. They’re skippable, but they’re worth doing to get some starting gold and items, as well as to learn how to perform the job you need to do. But each one is so drawn out, as it introduces you to the different characters you need to talk to for each Life, and everyone talks so much without actually saying anything important. You have to do this 16 times to unlock every single Life in the game. It’s so teeth-gratingly dull that the prospect of taking on a new Life was a daunting proposition, even though I had to do it to be able to craft a new set of items. The writing is charming, in a way, but every line of dialog feels so offhanded and lacking in gravitas that nothing seems important.

When the story gets out of the way, Fantasy Life has the ability to shine as halfway decent action-RPG and item crafting game. But when the Life system adds an additional layer of repetition to a genre that’s already filled with enough of it, Fantasy Life stops being fun and turns into work.

Fantasy Life lets you partake in every step of the adventuring process, from item creation to monster slaying. Unfortunately, the copious backtracking and bland narrative make this adventure rather boring.