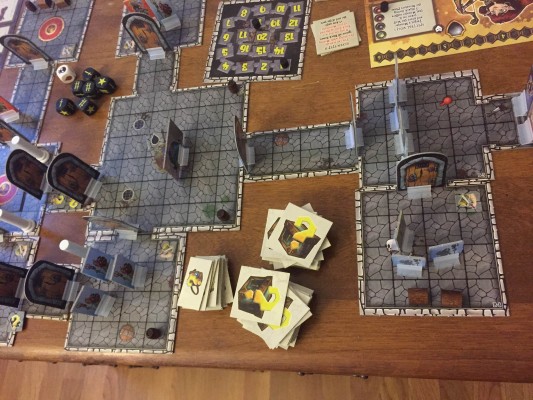 “Be one of six brave adventures exploring a dungeon, collecting treasure, dodging traps, and… what the heck is that? Is that some kind of gremlin?

“That’s an ugly snout, they run this dungeon.”

“Well, it is certainly an accurate name, it’s rather…”

“What? More of them? Now they’re swarming us? You shouldn’t have insulted them.”

Super Fantasy: Ugly Snouts Assaults is a light-hearted dungeon crawl with nods to hack-and-slash games. In it, you and your teammates attempt to complete some objective that generally involves beating up some big bad or getting out alive before time runs out. Six scenarios included in the base set weave an amusing narrative in the bizarre universe of this game. According to the scenario, players set up the dungeon with all the necessary map tiles, obstacles, barrels, treasure chests, traps, and monsters.

After the dungeon is set, players choose their character. Characters represent the classic fantasy archetypes, such as dwarf with a bazooka or little girl magician who might actually be the strongest character. Character cards represent a character’s life total and  show their starting equipment. These cards also a character’s prophecy in certain traits, such as strength or speed; these stats are used during various challenges used throughout the game. On the top of the player board is a level tracker, which you upgrade whenever you inflict damage or pass a cunning challenge. Every time you pass a level you can upgrade your skills. Each character has three skills, which are powerful abilities that need to charge up and that improve as the hero levels up.

The first phase is the Hero Phase, during which the heroes determine play order and each hero takes their turn. During a hero’s turn, they will have access to six, six-sided action dice. These dice can be split up however the player chooses for their actions, which constitute various stat challenges. In each challenge, players roll however many dice they choose out of their six dice; rolls will either contribute a value of one, two, or a star. The star gives the value of whatever a character’s proficiency in that stat challenge is. So, if a character with a strength value of four and rolls one, two, and a star, the total value rolled would be seven.

The actions you can perform are moving, opening a door, bashing a barrel, lock picking a chest, attacking, defending, charging up, and disarming traps. Moving tests the speed stat, and the character can move up to the amount rolled, but must end movement if ever next to an enemy. Opening a door tests either strength or cunning, and in either case the total needs to be at least six. Bashing a barrel uses strength and grants small items, while locking picking a chest uses cunning and grants large items; both need at least six to succeed. Attacking uses strength, aim, or magic depending on the weapon used, and the dice show a value equal to at least the defense value of the target that is attacked. Each successful attack roll grants only one wound; monsters are removed if their life total ever reaches zero. Defending grants shield tokens, which help defend against enemy attacks. Charging up allows characters to charge their special abilities, and it tests magic. Finally, disarming traps removes traps before they trigger, it succeeds on six, and it tests cunning.

After all the heroes take their turns, the monster phase comes. First, any rooms the heroes have entered wake up, meaning the monsters in that room are active until killed. Although more rooms may wake up according to the result of a fate die. New monsters are summoned from summoning points depending on the result of a fate die. Then, every active monster moves and attacks if possible. Unless a hero has defense tokens, they automatically take a wound. If the hero has defense tokens, that hero may be able to roll enough defense. If a hero reaches zero life points, they can’t be attacked again this turn, but the heroes lose time to perform their objective. Finally, the round resets for the heroes to activate again. Play continues either until the heroes complete their objective (and win) or until they run out of time (and lose).

Super Fantasy Ugly Snouts’ biggest asset is its theme. Ultimately, if you like the goofy artwork and a goofy sense of humor, you will probably like this game. The art and flavor text is consistent throughout to highlight that. Don’t get me wrong, there are some interesting mechanics and some interesting ideas in this game, but this game is ultimately designed for groups that would like its theme. This game is modeled after hack-and-slash games, a combat-heavy genre of video games where you hit some bad guys and then you hit some more. This is a good board game implementation of that genre of games. This game is essentially an endless onslaught. Depending on your luck, you will have to face near endless hordes of goofy looking creatures. Depending on how you reacted to that last sentence, you will pretty much know if this game is for you.

While a large part of the game is influenced by luck, some interesting mechanics exist. Besides for the theming, the thing that makes Super Fantasy’s gameplay so unique is the dice system. Having a set of skill ratings for several different skills and using those values to influence the die rolls is very simple, clean, and effective. You’ll ultimately spend the game deciding how to allocate these limited dice.

That does lead me to one negative I have about this game: there is a lot to do, but you completely ignore some of the possible actions. Your turns will generally be spent moving, attacking, and opening doors, which is fun in this game. However, many actions aren’t performed. For example, the barrels and treasure chests give you items, but these aren’t very good items. Often these items are not worth the precious action die you spend on them, simply because they do not give much of a boost at all. The replayability in this game does not come from the hero customization but from from the fact that monsters will activate at different tempos in different playthroughs.

However, this game does allow you to level up your hero, which is one of my favorite mechanics in this game. Having skills which you can improve through the game gives that satisfying feeling of beefing up your hero which you come to expect in games of this genre. The fact that you have to recharge those skills also adds a nice layer of strategy to the dice allocation.

Defense is underused in this game. I suppose this fits thematically, as this is a game about beating up a lot of baddies and not wanting to be beat up by them. However, after you take all your actions, you don’t often have any dice left over to use for defense. And even if you do, those dice don’t contribute much. For example, unless you have a high defense stat, each dice can only give you a defense of two maximum. Since all opponents roll at least two dice, they will always beat your defense. In order to use the dice to their full capability, you need to spend a few dice on defense. Those are dice that you can use to move, attack, or open doors. There is a timer in this game, which makes spending dice on defense seems like a waste. Ultimately in this game you will spend most of the time moving and attacking, as well as occasionally opening doors. This is not necessarily a negative, because it fits the genre of games this is trying to emulate, but hunting for treasures and defending seem like afterthoughts in the design of this game.

The only thing that I will say that is universally negative about this game is the set up time. It takes a while to set up this game, with all the tiles, the pillars, barrels, and chests, as well as all the characters and monsters. The pillars, barrels, and chests, which all have 3-D components all look really cool. However, I’m not quite sure the setup time is worth that picture. As for other components, the cardboard map tiles, doors, characters, and creatures are all perfectly functional and good-looking, but care should be given when placing stands on the cardboard pieces that need stands. However there are tiny cardboard counters to represent health, shields, and other status effect, and they are simply too tiny. Those will likely need to be replaced.

Overall, there are certainly some flaws in the design, and there are some really cool ideas (especially the leveling up and the dice allocation), but what will make or break this game for someone is the theme. The goofy artwork and the hack-and-slash game style certainly will not appeal to everyone. However, if it does appeal to you I would recommend this game. It captures and implements this theme and gameplay style very well, and it is a lot of fun.

Super Fantasy will appeal to certain set of gamers. There are some cool mechanics, but this game should only really be bought if you are interested in the theme. It is a light, goofy game that captures the onslaught of a hack-and-slash game.