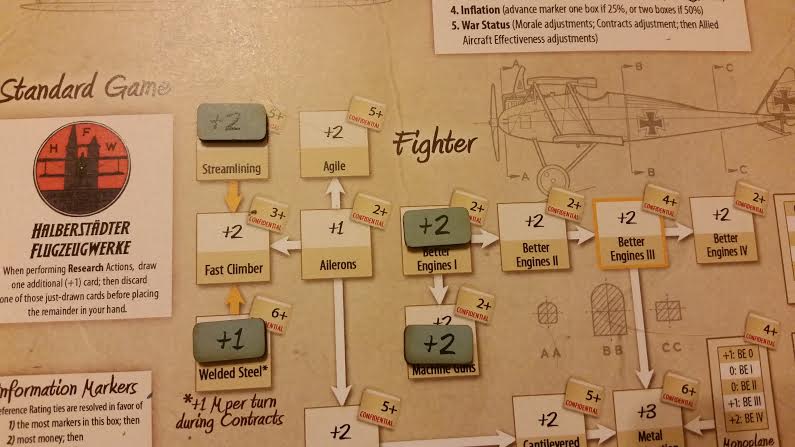 One of the great ironies of the destructiveness of war is that it often breeds technological advances. World War II saw innovations such as rockets and the atomic bomb. Go back further and many of today’s modern armaments, such as tanks and airplanes, grew in importance in World War I. It’s the advancements in aircraft that are the focus in Victory Point’s Wings for the Baron.

In Wings for the Baron, each player takes on the role of one of Germany’s aircraft manufacturers during the second half of the war to design better aircraft. The best designs are awarded contracts that earn money, the total of which is the game’s primary victory condition. Despite the war theme, this is not a war game. While players can have a modest effect on the war’s outcome, the overall progress of the war is abstracted through the use of war status cards. Hand management and planning are the keys to victory, not your ability to move armies.

To begin, each player selects one of the five available aircraft manufacturers. These are based on actual companies at the time of the war and, as such, each have different starting abilities. Thankfully, none are so powerful as to affect the balance of play, but it is nice that there’s some personality in starting choices.

Players are dealt two technology/event cards. On the top half of these cards is a technology. Playing the card for the technology allows you to add to the design of your plane, assuming your company has already researched any possible prerequisite technologies. The bottom half of the card has an event the player can trigger at different phases of the game. These can give a wide array of effects such as instant boosts to your plane’s effectiveness, burning down opponent’s factories, to boosting morale for the German army. Some even have negative effects to German morale but provide bonuses for your company. The key to remember is whether Germany wins or loses is immaterial, but it’s whether your company came out of the war in the best financial position. A player can only choose to play one half of a card’s effects, so sticking it to your opponent may not be worth it if it causes you to discard a technology you’ll be needing soon. Again, it’s another layer of key decision making found in this game.

Each plane upgrade helps modify your die roll to improve your plane’s effectiveness.

In addition to technology/event cards, each company has its own set of six action cards. Two of these are selected to give a player their actions for that turn. Order of the two choices matter as the first choice’s action can be performed twice. Since selection is done in secret, this really forces each player to not only plan out a long term strategy for their company but also keep an eye on their competitors. Play order is determined by the number on each action card. For example, build has a one on its card. During the first wave of actions, anyone that selected the build option would perform their action first. The second numbered action is then performed and so on.

As mentioned, the first action is build which allows you to increase the number factories the company has. Companies can only take on a number of contracts equal to its factory level. Three factories allows you to take on three contracts. As the game progresses, a lack of factories can really limit your company’s ability to generate money. Generally, I didn’t find much problem with maintaining a sufficient level of factory production, but be aware that event cards can damage your factory production an inopportune times.

Not only are you competing against other German companies, but Allied designs play a role as well.

The second action in order is espionage. Say your company is having trouble developing ailerons, a key prerequisite for several fight advancements, but a competitor has that technology. Playing the espionage action gives you a chance to steal that technology without owning the technology card for it. If more than one competitor knows the technology, bonuses are added to the dice. While this action doesn’t provide all the benefits of designing the advancement yourself, it is a nice addition to the game should you find the card gods are against you. It’s an effective action early, but higher advancements have a lower chance at espionage success.

The heart of the game really comes from the third and fourth options in the action order, design and research respectively. Research allows you to draw two technology/event cards and select one to keep in your hand. Design allows you to select a technology to add to your aircraft and also allows you to test that design. Each technology added to your aircraft gives a dice roll modifier. The more advanced the plane, the higher the modifier. A successful test allows you to increase your plane’s overall effectiveness. A company with the highest plane effectiveness will get first crack at the contracts. Rarely will you have a turn where you don’t perform at least one of these actions else you risk falling behind your competitors.

Banking is another possible action, and its importance requires a short review of history. The game’s currency is papiermarks. German marks suffered from massive inflation as the war drug on and eventually collapsed under the hyperinflation of the post-war years. The game reflects this through an inflation roll near the end of each game turn. The banking action allows you to convert some of your paper currency to gold. It may seem like a waste to spend one of those precious actions on banking, but an inflation roll could result in a loss of up to 50% of your marks. Nothing’s more disheartening to dominate a turn of contracts only to see the marks vanish in a subsequent turn. Money converted to gold cannot be lost to inflation, so it’s wise to bank occasionally to ensure your wealth lasts till the end of the game. The final action is a focus action which simply allows you to repeat your first chosen action a third time.

Once all actions are taken, players vie for government contracts. Again, the player with the highest plane effectiveness gets first chance at the contracts, with tie-breakers built in should two or more companies have equally effective planes. Each contract won results in one papiermark added to your coffers. Early on, when factory levels are low, there’s enough contracts for multiple companies to land at least one. Later, though, as contracts fail to increase at the same rate as factories, it’s easier for one company to gobble up all the contracts. This is one reason why the game requires at least three players. If one player is running away with all the contracts, the other two players need to work together to reduce the gap. This is definitely a game of where the enemy of my enemy is my friend would be profound.

If this weren’t enough, players also can recruit ace pilots, like the famous Red Baron, or talented engineers. These can provide dice roll bonuses to design checks and awarded contracts. They are also used in tie-breakers as well as counting toward victory totals at game’s end.

Speaking of which, the game has a couple of ways to determine the end. At the end of each turn, a war status card is drawn. German and Allied morale is always reduced as the war continues. If either reach a morale of zero, which is most likely to be the Germans, the game ends. This can be slightly offset by the player with the highest plan effectiveness. The leader between the Germans and Allies gains one of those lost morale back but expect Germany to be often looking up at their Allied counterparts. Additionally, should the inflation chart max out, the German economy collapses and the game ends. Regardless of how the game ends, the winner is the player with the most combined marks, gold, and bonus tiles.

Sure, the game may not be as aesthetically pleasing as other games. Company production mats are essentially flowcharts to show development order, and the technology/event cards show black and white photographs from the era. But don’t dismiss the lack of bright graphics for poor production and functionality. The company mats work perfectly to provide players with information and development order. The cards really immerse you in the theme, giving you a sense of what’s going on in the war as you struggle to produce the best aircraft you can for the Kaiser. Cards and markers are all of the typical high quality of a Victory Point game. The rulebook isn’t one of the clearest I’ve read, though, so make sure you walk through the game as you review the rules.

The game also provides a tremendous amount of replay possibilities. The standard game requires only the construction of fighters, while the campaign game adds recon and bombers to the mix. I found the standard game to be quite a strong challenge and is highly recommended before jumping straight into the campaign mode. There’s even a solitaire variant that’s useful for learning the game’s mechanics though this game was meant to play with live opponents.

When it comes to games that appeal to wargamers and non-wargamers alike, most end up being light games covering a battle like Memoir ‘44 or Commands and Colors. Wings for the Baron is a totally different experience from those. While my concerns with the game are trivial, the core of the game is great experience. It’s got the backdrop theme and immersion to interest any wargamer while the game’s mechanics would feel accessible to non-wargamers. Some may think this game has a narrow niche, but I think it’s a game well worth investigating no matter your gaming preference. It’s not a difficult game to learn but has so many interesting decisions that it provides an excellent challenge.

Wings for the Baron

Wings for the Baron is a great game for wargamers and non-wargamers alike. Hand management and action selection blend smoothly to provide a deep strategic experience. Yet, with simple rules and under an hour gameplay, the game is very accessible. It's a unique and entertaining crossover game.

Nick grew up with games like Axis & Allies, Fortress America, Samurai Swords, and Statis Pro Football. After a life hiatus to work and start a family, he rediscovered his passion for gaming in 2012. Originally a war gamer, he now appreciate different genres and enjoys exploring great game systems.
Related Articles: Tabletop, Wings for the Baron
Share
Tweet
Share
Submit