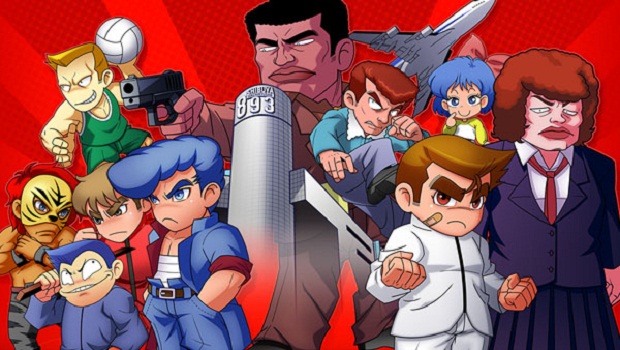 With so many franchises celebrating their milestone anniversaries, a few relatively obscure ones are also joining the fun. Case in point, the Japanese beat-em-up River City series is commemorating its 30th anniversary, with Natsume and Arc System Works bringing River City: Tokyo Rumble to the 3DS stateside. A blatant love letter to the arcade games of old, Tokyo Rumble aims to provide players a nostalgic experience with its retro presentation and simple mechanics. Does it have what it takes to stand up to the big bad bruisers in the current market?

River City: Tokyo Rumble follows protagonist Kunio as he tries to defend his friend from bullies. The battle goes sideways after the scuffle as he finds out that a syndicate known as the Tokyo Lion Alliance is planning to overrun the place with crime and debauchery. Armed with his fists and joined by three of his pals, Kunio punches and kicks his way to defeat his enemies and bring peace to the land of Tokyo.

What instantly sticks out in the game is the decidedly NES-looking presentation. The game is a love letter to the Double Dragon and Final Fights of the 80s and 90s, and it surprisingly holds up. The story, basically “beat up bad guys to save the day,” is cheesy but charming, and the main protagonists are flat in their characterization, but this fits with the game. It lacks the complexity of modern narratives, but that’s part of the nostalgic fun of it all. The game doesn’t really tax the hardware as much, and the 3D effects are pretty ineffective, but the pixel art is very well made.

While a beat-em-up in practice, the game also employs some RPG-lite mechanics. By beating up bad guys, you can level up Kunio and his three unlockable friends’ attributes such as strength and willpower. You can purchase items that can give you stat boosts as well as scrolls that will allow you to learn new moves. While there is no multiplayer in the main story mode, you’re allowed a partner to help you out when the going gets tough, and can give them AI orders like charging towards an enemy or helping you out by fighting someone you’re targeting. These little RPG touches help give the game a little depth, and further contribute to the charm of the game.

However, while the presentation is purposefully retro, the gameplay is more hit-and-miss with this nostalgia. Going back to its NES roots, Tokyo Rumble harkens back to a simplistic two-button system: you have one button for punching and one for kicking. While there’s a separate button for jumping, you can actually mash both the punch and kick buttons to accomplish the same thing, so it’s really up to you if you want two or three buttons. Surprisingly, this combat system is somewhat deep; while there isn’t a dedicated block button, you can use the two buttons in creative ways, such as picking up a baddie and chucking them around, parrying some kicks with your own, or grabbing a nearby weapon and clubbing someone with it. For a simplistic system, it’s pretty gratifying.

The basic fighting mechanics work, but the movement is very clunky. This game was designed for a 2D plane, and it shows: while you can dash by tapping the left or right d-pad twice, there is no option to do this up or down. When you’re actually moving up or down, your movement speed slows to a crawl, leaving you vulnerable to enemy attack. Additionally, some moves requiring jumping or simultaneous button presses (like grabs,) seem to be inaccurate enough to be annoying. There were times that I was pummeled because I missed a jump, and since you can’t defend yourself at times, a large chunk of my health would be sapped away.

Unfortunately, the rest of the package is barebones. There isn’t a local multiplayer mode for the main story, which is a shame, since the game would have been tons of fun if I had a buddy with me kicking the snot out of park punks. The AI is serviceable, but a human partner would have been cool. There are a couple other modes in which to mess around, but they’re a bit identical. There’s a battle mode, where up to four players can go and fight each other using characters unlocked in the story mode, and a dodgeball mode, which alludes to River City’s sports titles and is basically battle mode but with projectile balls being the only means of hurting opponents. While these modes boast dozens of characters, there are really only a few viable options since only the main characters and enemies will have some of the best attacks here. If the character you select was a wimp in the main campaign, prepare to get destroyed by Kunio and pals! These are fun diversions (and include local and download play,) but with limited customization options, they end up being pretty shallow.

River City: Tokyo Rumble is an unapologetic love letter to the beat-em-ups of yesteryear. While simplistically accessible and filled to the brim with nostalgia, it’s brought down by very limited options and some clunky controls.

Elisha Deogracias is an aspiring accountant by day, freelance writer by night. Before writing for Gaming Trend, he had a small gig on the now defunct Examiner. When not being a third wheel with his best friends on dates or yearning for some closure on Pushing Daisies, he's busy catching up on shonen manga and wacky rhythm games. Mains R.O.B. in Smash. Still doesn't know if he's a kid or a squid.
Related Articles: River City: Tokyo Rumble
Share
Tweet
Share
Submit