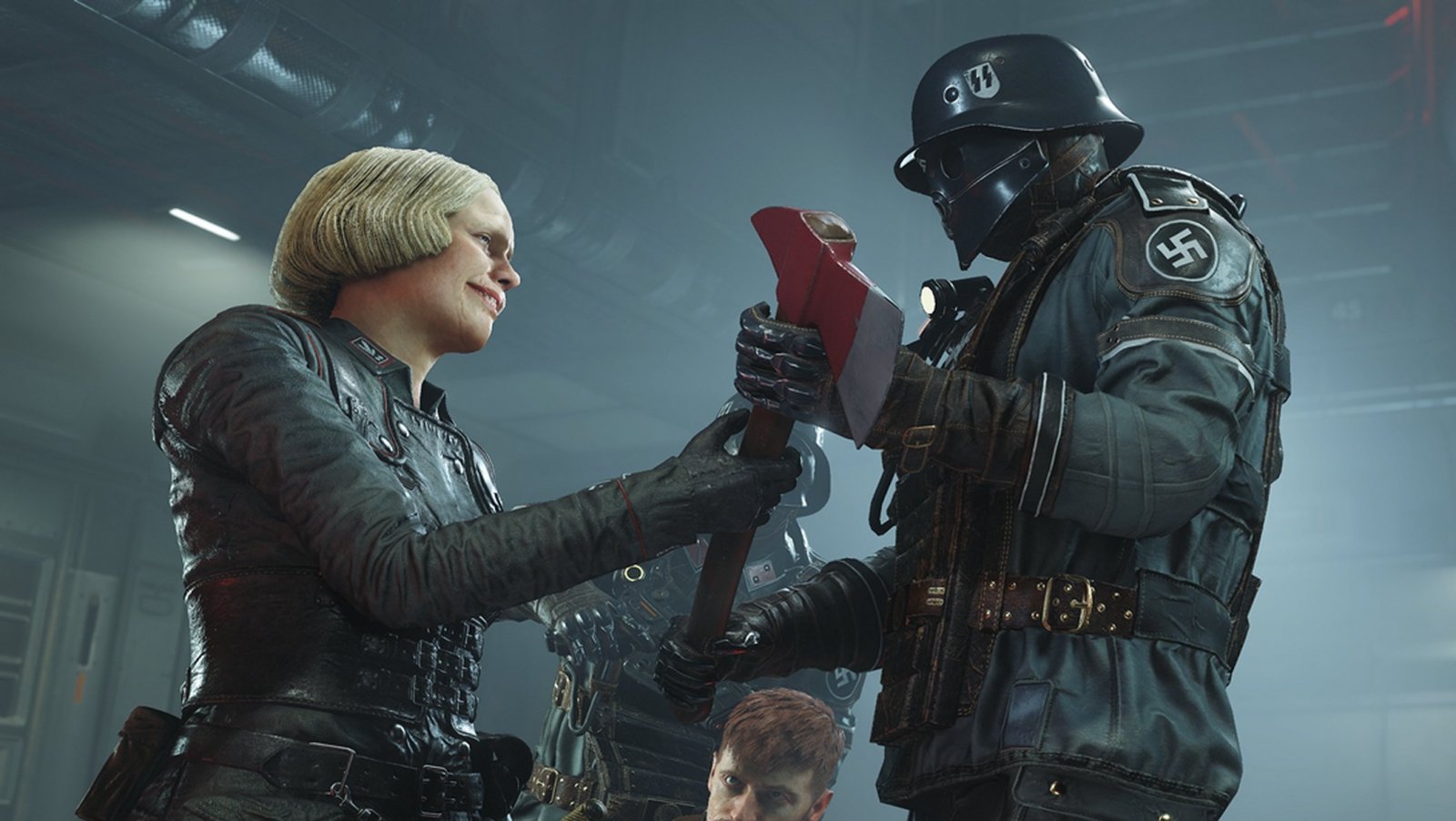 At some point during the opening moments of Wolfenstein II: The New Colossus, I knew that I was about to experience something unlike anything I had played before. After a much-needed recap of the events in Wolfenstein: The New Order, you find yourself reliving key moments of in the life of the protagonist, BJ Blazkowicz. You learn about his life growing up with a Jewish mother and a prejudiced, spiteful father. You revisit a terrible decision BJ was forced to make in the line of duty. You experience a traumatizing moment in BJ’s childhood and are made to make a difficult choice. By the end of the sequence I had chills. Wolfenstein II: The New Colossus is a first-person shooter that blew me away before I even fired a weapon.

Wolfenstein II: The New Colossus cuts through the bullshit and puts a killer campaign and a meticulously crafted narrative above all else.

In the age of multiplayer-first, online only, and loot boxes, Wolfenstein II: The New Colossus cuts through the bullshit and puts a killer campaign and a meticulously crafted narrative above all else. As BJ Blazkowicz, you travel across Nazi-occupied America on a mission to ignite a revolution against the fascist occupation. Along the way, you’ll confront your own failing mortality, question your sanity, and explore your own history with race as it relates to racism in America before the Nazi’s won World War II. This is not a game that avoids the darker themes surrounding the implications of their alternate timeline, but rather tackles them head-on.

That said, the game is also incredibly over-the-top and comical. You’ll find yourself defying physics to dual-wield over-sized weapons, riding a massive robot that breathes fire on hordes of goose-steppers, and interacting with one of the most larger-than-life cast of characters in gaming history. And that’s one of the major reasons that Wolfenstein II: The New Colossus succeeds in its focus on narrative. Almost every character is boisterous and a little insane, but somehow grounded and loveable at the same time. While gameplay can oftentimes be silly, it’s informed by a very personal narrative, which gives context and meaning to your actions every step of the way. It’s almost as if MachineGames is intentionally throwing the player off-balance, so they’ll never be able to predict the next totally unexpected development. The story itself takes so many unexpected twists and turns throughout the game’s duration that I often found myself wondering whether I should be laughing at the absurdity of the situation, or be fearful of the next development on the horizon.

Even more impressive is the lengths to which the game goes to respect and honor the big decisions you make. Though there are admittedly few narrative decisions to make, the ones you do have massive implications. In one early example, the choice to save one character over another has massive implications throughout the game, including entire cutscenes going incredibly differently throughout the course of the game, and a unique weapon being given to the player depending on who they went with. In another example near the end of the game, the player gets the opportunity to murder Hitler, even though it ruins the rest of the story and ends in your death. I’ll take a few choices with huge consequences over many decisions with small consequences any day, and in this regard The New Colossus shines.

The Wolfenstein series has always been about killing Nazis, and in that regard Wolfenstein II: The New Colossus succeeds in giving players the most freedom and the most plentiful opportunities to do just that. Nearly every encounter can be approached in whichever way you please. Feel like sneaking around with a hatchet and dismembering Nazis one-by-one? Go for it! Wanna bust down the door while dual-wielding machineguns? Knock yourself out! Prefer to keep your distance and take everyone out long-range? More power to you! Each option is entirely feasible, and the game never judges or punishes you for choosing one tactic over another, though missions can feel very different depending on your approach. In one level that I played multiple times, a stretch of the mission takes place on a slow-moving elevator. On my run-and-gun playthrough, enemies rained down upon me as the platform steadily ascended, while on my stealth playthrough…nothing happened at all, and I enjoyed a peaceful ride to the top. Moments like these really make you feel like you made an impact on how events unfolded, and feel like a reward for doing things your way.

Nearly every encounter can be approached in whichever way you please.

No matter how you choose to play, however, outright combat is inevitable, and your options there are equally varied. You can use a single firearm, and take advantage of the scope and the ability to lob grenades with your free hand, go full-Rambo by dual wielding, or use hatchets (thrown or in melee) to hack enemies to pieces, oftentimes avoiding ever firing a shot. As you play, you’ll unlock perks by accomplishing specific tasks, which make you better at playing your way. Wanna sneak around faster? Get as many stealth takedowns as you can. Want heavy weapons to have more ammo? Get kills with heavy weapons. You’ll also collect upgrades for weapons that have some seriously meaningful effects on your arsenal, and unlock abilities partway through the game that are incredibly huge game-changers impacting almost every encounter you face in the second half of the game (I’m being intentionally vague here to avoid spoilers, but trust me — it’s fucking awesome).

Wolfenstein II: The New Colossus also looks and sounds fantastic. Character models and their animations are packed with personality and life, bullets and gore spray through the air, covering every surface they come in contact with, and environments are bleak, dystopian, and breaktaking. Whether you’re traversing the ruins of Manhattan, climbing a Nazi superstructure, or taking a light jog on the surface of Venus, you’ll find beauty and horror in equal measure along the way. In terms of sound design, The New Colossus nails their Dickensian aesthetic. Frantic electronic music plays over the sound of gunfire, explosions and Nazis shouting in German, while the protagonist emotionally mumbles nihilistic poetry. However, I did encounter occasional audio glitches, wherein the audio from the music or sound effects would disappear for a second or two without cause. I didn’t happen very often during my playthrough, but it certainly pulled me out of the experience, and pumped the brakes on an otherwise stellar feast for the ears.

There are some minor issues with Wolfenstein II’s game design that made me scratch my head, though. For instance, while gameplay is incredibly fast-paced and intentionally immoderate, I found myself stopping to look at the ground for ammo, armor, and health kits all the time. Though, most times you pick up these consumables automatically by walking over them, I found this system to be somewhat inconsistent, giving me cause to backtrack and repeatedly tap the A button until I’d restored my reserves. The Wolfenstein II: The New Colossus also features side quests, which amount to short bounty hunts for Nazi officers. Though these are nice additions, they require a currency to unlock that wasn’t abundant enough for me to unlock all of them without grinding. And the side-missions themselves have you revisit areas that you’ve already been to in the main campaign, and re-murdering your way through the area. In most cases, the only changes for these quests are that you travel backwards through the level, and enemies are placed in different locations.

In 2014 MachineGames made a statement with Wolfenstein: The New Order. Now, with Wolfenstein II: The New Colossus, they’ve written their manifesto. It’s easily one of the best games you’ll play all year.

You know that jerk online that relentlessly trash talks you after every kill? That guy was probably Travis "Tie Guy" Northup. Competitive, snarky, and constantly wearing a tie, Travis has been writing his opinions about electronic media since he was a teenager, and is pretty much the only person to hold his opinions in high regard.
Related Articles: Wolfenstein II: The New Colossus
Share
Tweet
Share
Submit