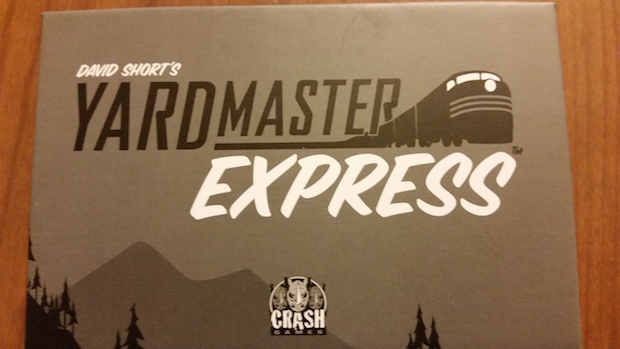 When Crash Games launched Yardmaster Express on Kickstarter last year, I took my first dive into the genre of filler games. Filers are meant to be played in a handful of minutes and can be used as a short break between longer games or strung together for a light hearted evening of gaming. I was drawn in by Crash’s well-made Kickstarter page, cool train theme, and a price tag that was barely more than a single trip to Starbucks. I eagerly backed my first filler game, and then promptly forgot about the game during those long months between Kickstarter funding and the arrival of the actual project.

In the meantime, I ventured further into the foray of fillers with mixed results. Some were worth a play; others were ten minute games that were at least ten minutes too long. By the time Yardmaster Express arrived on my door, my excitement for it had waned. It reached its low point when the family dog got to the mail before I did and my copy of Yardmaster Express had suffered a catastrophic derailment.

It was then fortunes started to change. Once Crash Games founder Patrick Nickell’s hysterical laughter at the pictures of my ruined game subsided, I was sent a replacement copy, Kickstarter goals included, at no charge despite me offering to pay again. It was a great gesture on his part.

Opening the game was a pleasant surprise. Inside the magnetic box was a colorful deck of cards, a first player train figure, an expansion set of caboose cards, and a nice draw string bag. Did I mention all this came from a $7 Kickstarter? Even at double the price, the current MSRP, it’s a good deal. The cards themselves come in three categories. There are non-scoring engine cards that serve as a quick reference guide as well as the opening card play. The cargo cards are split into halves with each half containing a number and a color. Then there’s caboose cards which can be used optionally to add bonus points at game’s end. The only real complaint about the materials will come from those that like to sleeve their cards. The cards are an odd size, making sleeving problematic, but the cards are sturdy and should last with care.

The game itself is quite easy to learn. Every player starts with an engine card of no value. The first player gets a hand of cards and selects one of the cargo cards to place behind the engine. The remaining hand is passed to the next player who draws a card and then chooses which card to place behind their own engine. Each subsequent round is done the same way with the next card being added to the previous one. The left side of the card placed must match either the color or number on the right side of the card played the previous round. Scoring comes from tallying the numbers on the cards and a bonus can be obtained for the longest color run. From there, decisions need to be made. Do you play that valuable four/four split card, or do you prevent the next player from continuing their color run? I love a game where always shooting for the best card isn’t always in your best interest.

The optional caboose cards can also be used. Like the standard color run bonus, they add a bonus that all players can shoot for. An entire expansion of caboose cards were included, adding replay value to the game.

All this talk about caboose cards and longest trains must mean the game drips with theme. Not really. The game’s concept would work with or without trains. In fact, there’s nothing particularly ground-breaking about the game play either. As one of my regular gaming partners noted, it’s not unlike UNO. That’s true, but that also allowed me to make a connection to my children to help them understand the basics of the game. The simplicity will appeal to casual gamers or even draw in those muggle-like nongamers. The additional features of deck passing and bonus cards add sufficient strategy to a game that generally lasts 10-15 minutes making it more complex, yet faster, than UNO.

Yardmaster Express ends up being a quick, fun game. It plays well as a filler and is accessible to entice the casual gamer. Add in the small price tag, and it’s a formula for worthwhile filler.

Yardmaster Express is a quick, light card game where players attempt to build the best cargo train. Its fast, fun, and well worth the small price tag.