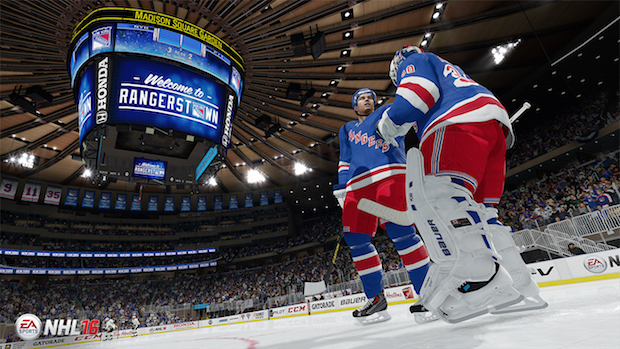 A few years ago, EA’s NHL series was considered one of the best sports franchises around. It would consistently make key iterations on important features, all while maintaining the style that brought fans out every release day to purchase the game. That all changed last year with the series’ leap to the PS4 and Xbox One, as fans revolted due to the stripped down nature of the product. While the gameplay was the same, and presentation improved drastically, overlooking the exclusion of multiple fan-favorite features is something many could not do. This year feels like the perfect time for EA to make right by their fans. For better or worse, NHL 16 feels like it was created with that goal in mind.

First off, the visuals have continued to improve in NHL 16. A host of new presentation options were introduced last year, and they have only been further enhanced this go around. Player models look better than ever, and that beautiful white glow of the ice continues to shine and get scraped up as every minute passes by. Animation is key in hockey, and every hit, poke check, and deke still looks excellent. Hilariously, EA Sports has even implemented “playoff beards.” There is a superstition among many that you must stop shaving when you make the playoffs. That can now be seen on certain players, as they get deeper into the playoffs, their beards will thicken. The future is finally here, folks.

One of the biggest features to get slimmed down last year was NHL’s “Be a Player” mode. As it is in many sports games, you create a player, wind up on a pro team, and play your career out, earning skills, signing new contracts, etc. Brought back this year, you can play as a CHL rookie for a season before getting to the draft. Your play during that season will determine at what position you are selected, if at all. This is a great concept, but playing every game in the season, or just a majority of them, is a time-consuming process. The reason for this is you can no longer set the amount of time in each period when beginning a “Be a Player” career. In previous games, you could adjust the settings to where each period would only last a certain amount of minutes, but in NHL 16, each “Be a Player” game must have 20-minute periods.

Another returning feature is the ability to skip other player’s shifts when you are on the bench. Unfortunately, the few seconds it takes to simulate, coupled with UI being navigated, makes the entire process feel more arduous than it should be. Combine that with the fact that you are being rotated in and out every one to three minutes, and you have a slow, poorly-paced game of hockey. The fact that you have to play twenty-minute periods makes it all the more disappointing, and ultimately kills what could have been a highly upgraded feature.

On the other token, the “Be a GM” mode now features a player morale system. Throughout the season, players will become happier or sadder based on your decisions and their play on the ice. Players will request to have a meeting with you at random points in the season. In these, players will say something along the lines of “I’m not happy with my play” or “I love what you have been doing” and you will have four dialogue prompts that can either hurt or help the player’s morale. The choices are usually pretty clear-cut. For example, if they are unhappy with their play, tell them they will get better as the season goes on. This system is far from revolutionary, as it can be found in numerous sports games, but it is still implemented pretty well in NHL 16.

NHL 16 continues to bring the excellent on-ice gameplay we have come to expect in the past few years. As far as upgrades go, they are mostly only noticeable to frequent players, with the exception of NHL’s on-ice trainer. The new trainer will show you prompts around your selected player; these will give recommendations of what would be best to do in the situation at hand. For example, if the opposing team is attacking with three players, it is best to go for a simple poke check instead of sprinting directly at the opponent in hopes of performing a bone-crushing hit. Of course, the trainer can be turned off entirely, but it will act as a great introductory tool for new players. On top of that, it can really help you perfect points of your game that you may not feel confident about. The graphic on screen is not obtrusive, and blends very well with the action on screen, meaning you will hardly notice it unless you need that recommendation of what to do.

As for the more minute changes, coaching feedback has returned. After each period (or in the pause menu), you will get tips from the coach saying what you are doing well and what you need to tighten up. Also added is a new precision skating system. For the most part, all of the movement feels the same as it did last year. The only clear difference with this new skating is it is much easier to intercept passes and hop in the way of opposing players. It makes your player slightly more agile, which is noticeable as you try to disrupt a power play.

Some other features have got small upgrades, even though they are not immediately recognizable. Doc Emrick and Eddie Olczyk are once again heading NHL’s commentary table. There are some new lines written this year, and they continue to build on a pretty solid performance by the duo. This time around, they tend to focus more on the actual action happening. NHL’s card-based feature, Hockey Ultimate Team, has received some new player management options as well as a single player season. The single player season feature is long overdue, as many people do not particularly enjoy playing sports games online due to opponents outmatching them.

Speaking of online, NHL’s much beloved EA Sports Hockey League has returned. This mode allows players to create their own player, hop into a league with friends or random folks, select a position, and play an entire game. Added in NHL 16 are specialized player classes. These classes are selected by the player and determine if you will be more skilled at shooting, defending, or if you want to be an all-around type player. The new class-based system is a smart addition to a really strong feature. It is nice to see EASHL back in NHL 16, and it is even better to see that it is better than ever.

After a small misstep in NHL 15, NHL 16 feels like a huge apology letter to fans. Many removed features have returned, but that also means improvements are few and far between. EA Sports Hockey League features a nice shot in the arm, but the Be a GM mode seems to be taking a back seat. Be a Player has received some nice additions, but not being able to alter the period length seems absolutely asinine and ruins the mode. NHL 16 is a well-written apology letter that will bring fans back to the franchise, but if you are looking for monumental upgrades, look elsewhere.