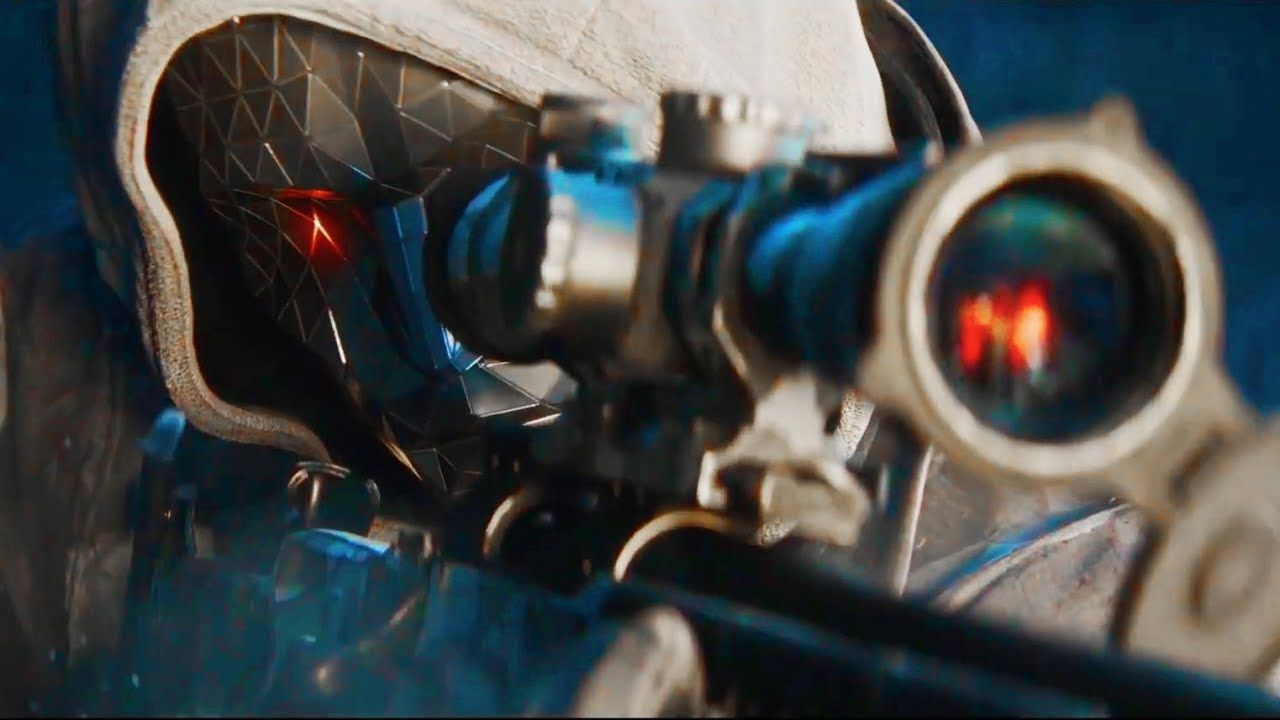 I tuck the butt of my rifle into the crook of my shoulder. Pressing my cheek against the stock, I get a good weld to ensure my shot is stable. Remembering my rangefinding, I see that the target it 300 meters away, so I use the silhouette in my scope to compensate for bullet drop, clicking the BDC dial to adjust for the distance. My rifle sports advanced tech, helping me predict where my round will impact, and how the cross breeze will affect the bullet in flight. I take a deep breath, exhale evenly, and dry lung in preparation. Just two pounds of pressure on the trigger, being careful not to jerk, I send my round downrange. Unaware of the danger, my foe never saw the shot.

Sniping is a complicated skill set that requires an extensive amount of practice, dedication to the craft, and a fair bit of geometry. Having spent five years doing it in the real world for the military, sniping games are an odd fascination for me, knowing that, most often, I’m going to simultaneously love and hate them at the same time. Developer CI Games has fallen into this category several times with their Sniper titles which have, until this title, leaned too heavily into the game side of things to the detriment of the simulation aspects. While Sniper Ghost Warrior: Contracts is still very much a videogame, it finds a far better balance this time around. Let’s talk about why this iteration captured me so much more than its numbered predecessors.

In terms of layout, the game features just five levels, but don’t let that dissuade you — these levels are absolutely massive. So much so, in fact, that there are even fast travel points throughout each of the levels. Each locale comes with a story thread around Russian oligarchs and gangsters, oil, and crime. In short, people need killing, and you’ll happily do it for money. You see, this time around, you aren’t a special forces soldier — you are a merc.

Before setting off, you’ll have to select from the three difficulty levels — Marksman, Sniper, and Deadeye. Marksman has less enemy damage, enemies that are less aware until you are right on top of them, and a lower difficulty level. Sniper is the default difficulty level, with enemies able to detect the player at a reasonable range. Deadeye is not for the faint of heart, with increased enemy damage, but also hyper-aware foes able to see you if you are out in the open, and any sound being investigated and prosecuted with prejudice.

Each of the five levels have a series of lengthy contract objectives, sub-objectives, and bounties, and challenges. Bounties are straightforward enough, literally finding tracks, analyzing them, and then discovering where your prey hangs out waiting for a bullet to the dome. Challenges often involve getting up close and personal, such as interrogating a number of troops, hitting a shot at a certain distance, using specific gadgets, or even killing just your named targets. There are a number of collectibles including logbooks, posters, and the like, but these mission, sub-objectives, and collectibles all yield money and tokens that you’ll use for upgrades. 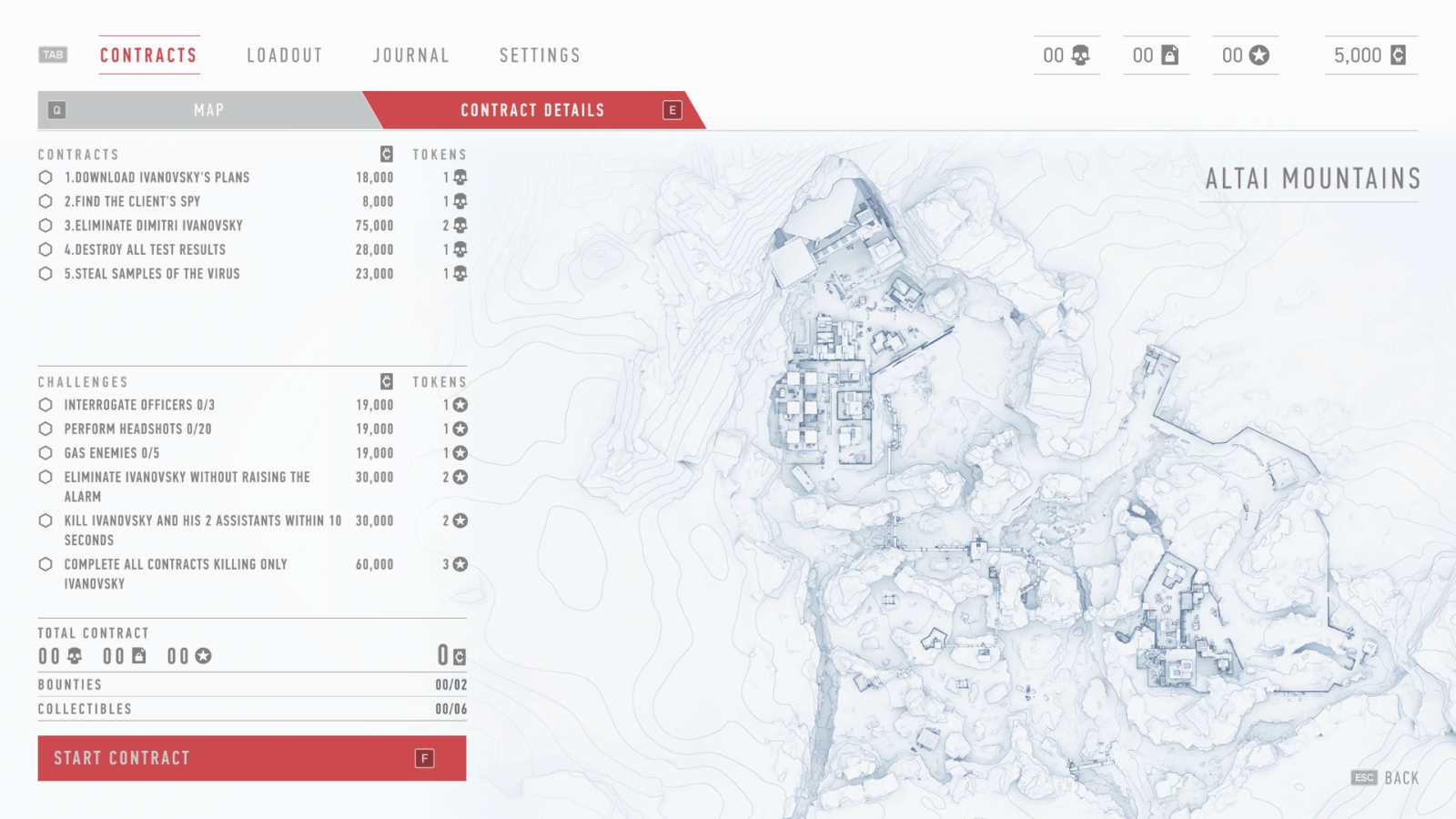 Contracts can be tackled in any order.

There is a small hitch with bounty hunting, that is thankfully a nuisance not a showstopper. Once you’ve found your bounty, the game occasionally will try to punish you for doubling back for a better nest, obnoxiously warning you that you are “LEAVING BOUNTY LOCATION’ with a countdown until you suddenly fail for…uh…reasons. Thankfully, the bounties aren’t lost, and you can re-engage them, but these arbitrary mission borders don’t make sense in the context of a giant open world. Similarly, save points are either entirely too frequent, or completely absent. During one mission I found myself repeating huge sections of the entire map without a save point in sight, and dying meant recycling 20-30 minutes of shots.

Once you’ve completed an objective, you’ll need to haul back to an extraction point to turn it on — fast travel is disabled until you ‘escape’. These extraction points are essentially mid-mission saves, and you’ll immediately jump right back into the thick of things until you resolve all five of your main missions. There really aren’t any ways to “fail” the missions, but there are plenty of ways to do it poorly or loudly.

Cash in hand, having completed some or all of the objectives, you’ll have an opportunity to upgrade. Your mercenary loadout comes complete with a special mask that helps you with things like night vision, tagging foes, figuring bullet drop and wind adjustments, detect mines, navigation options, and with upgrades, even the directionality of CCTV cameras, sound sources, sniper line of sight, and thermal vision, just to name a few. Similarly, you’ll be able to upgrade your specialized nanofiber suit, support equipment like a remote sniping turret, and your gadgets. While you can certainly set out without buying any of them, these upgrades do make the job easier.

Beyond the aforementioned upgrades, you can also pick up a number of weapons, both primary and secondary. Additionally, there are support weapons like explosive and gas mines, grenades, pistols, and six different bullet types — EMP, Explosive, Tagging, Luring, Armor Piercing, and D.A.R.P.A. bullets that ignore wind and elevation. Each has a series of stats like effective distance, damage, and even how much noise they generate. Going loud is always an option, and there are a number of rifles that do not have suppressors, but that means you’ll be running for your life fairly often as the enemy echolocates and countersnipes in your general direction. 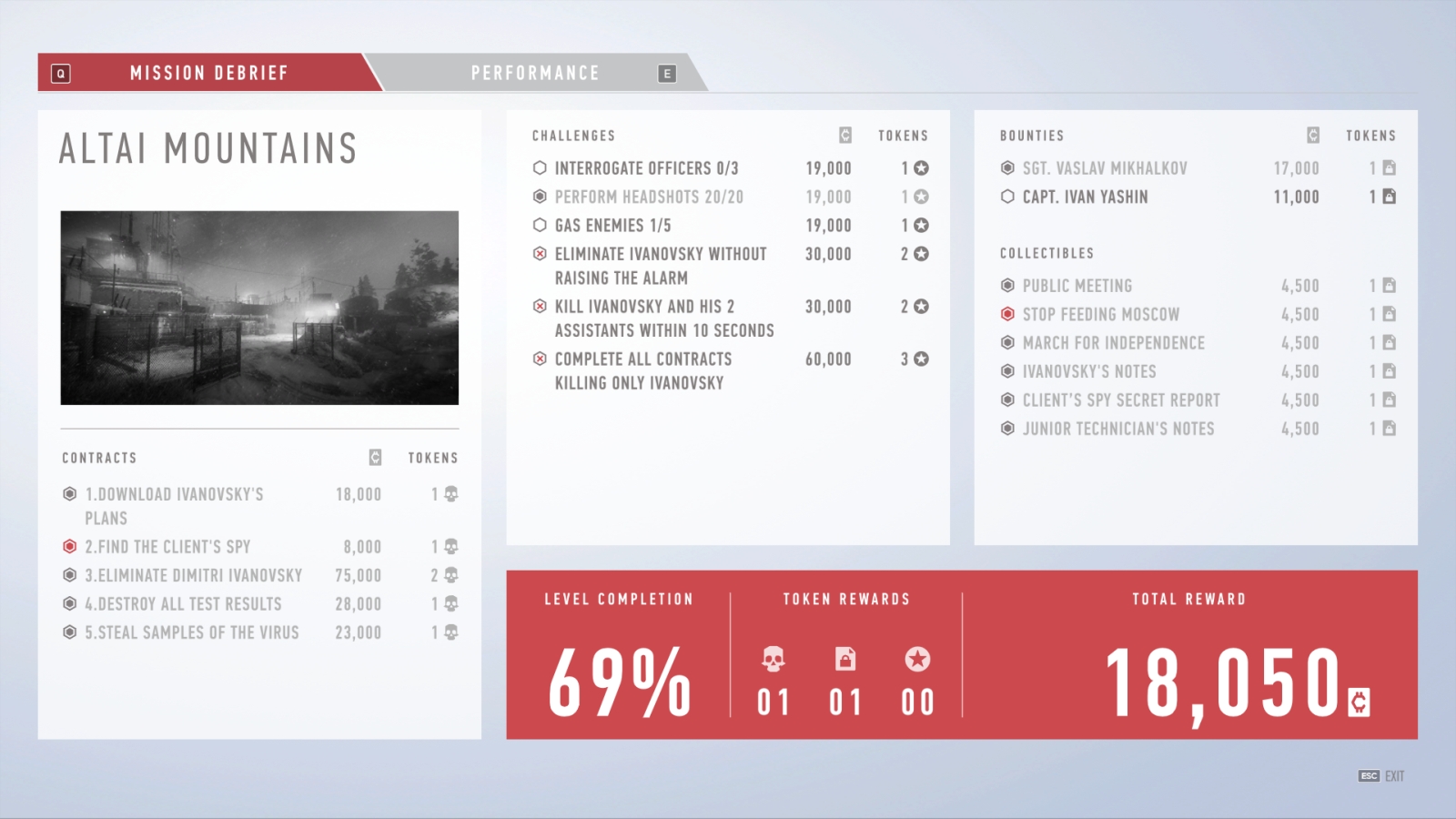 You’ll earn cash to spend on upgrades mid and between missions.

The core gameplay loop of Sniper Ghost Warrior Contracts  is exactly what you should expect. You’ll be given a target package, you’ll post up on high ground, figure your distance, hold your breath, and with some practice, land your shot. The hardest part of sniping in the real world is that the only shot that really matters is the first one, as everything after that reveals your location, and Sniper Ghost Warrior Contracts captures that. Stealthily finding your blind may mean taking out enemies quietly, going prone, and prosecuting your targets far, far away from sight range. Even suppressed, repeated missed shots will eventually cause them to become suspicious and begin hunting you. You can use your surroundings (e.g. breaking generators, popping circuits, and even setting off explosives) to further confound the enemy, though nothing is quite as effective as a well placed shot. It is somewhat possible to run and gun with a secondary weapon, but you’ve really missed the point if that’s your approach.

Before long, the game switches things up. As an example, you might need to take out a man and his wife, which you can do from an abandoned apartment complex a great distance away, but one of your sub-objectives is to retrieve the man’s phone. That means getting very up close and personal, and possibly killing every damned soldier in the place. How you approach the mission is entirely up to you, but by my way of thinking, they can’t call for reinforcements if I’ve killed all the reinforcements. That, however, can bring its own set of challenges. 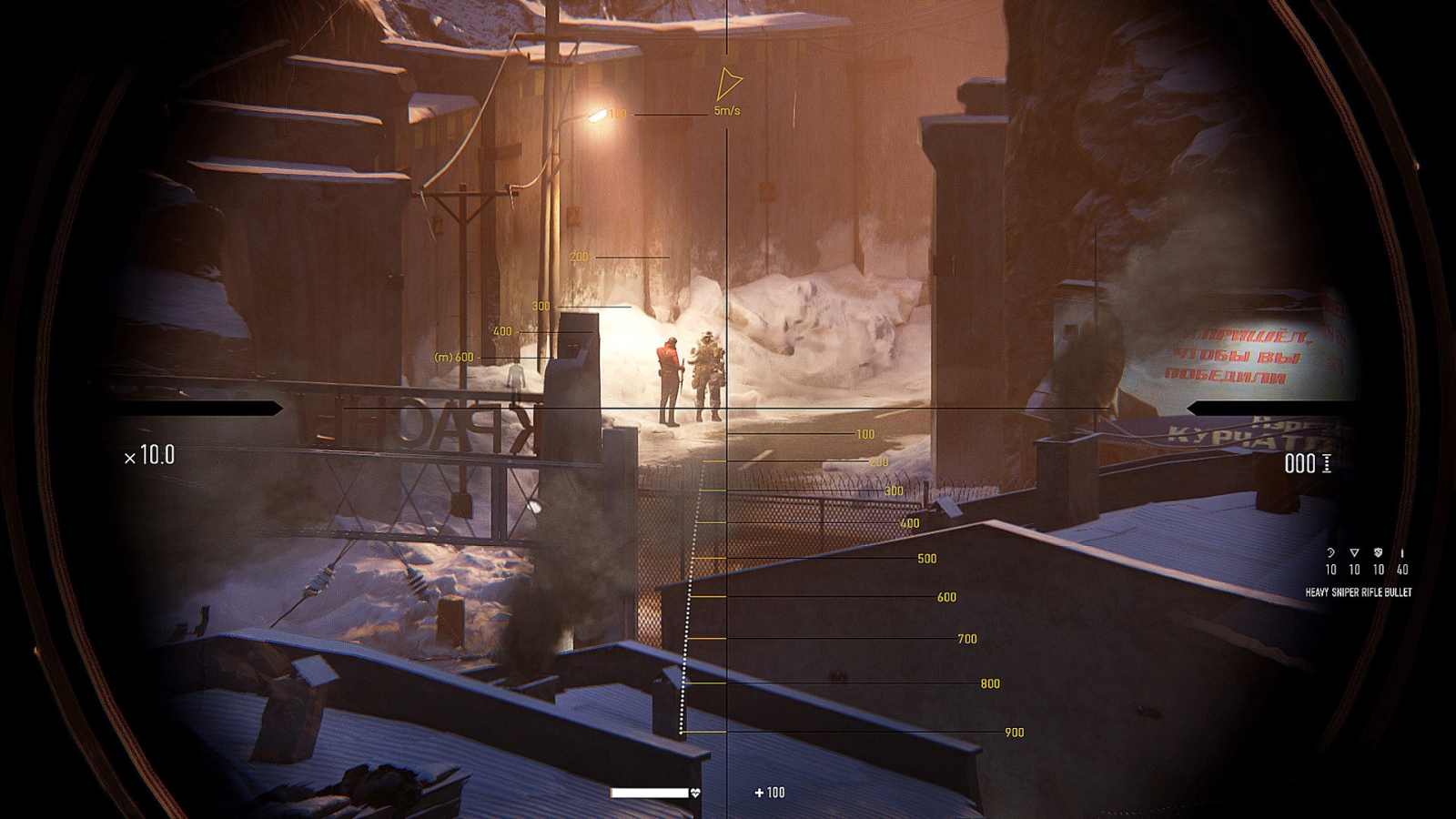 As I mentioned before, there really isn’t a fail condition in Sniper Ghost Warrior: Contracts, other than your death. That said, missing a shot can cause an enemy to flee. In one mission, there’s even a body double, and if you guess incorrectly and kill said double, it’ll send the real target fleeing into a bunker that is far harder to crack than a wide-open outside shot. In this way, the world feels like it reacts to your decisions, and it can rapidly change the challenge you are facing without it feeling arbitrary.

In later missions, you’ll encounter more tech in the field. Enemies will begin to use drones (thankfully you can scout with your own), as well as jammers and anti-drone towers. Anti-Drone towers can be disabled if you smack their control panel three times, but it’s still best if you avoid them completely. Jammers, on the other hand can be disabled a number of ways, but they will clear any enemy tags you’ve logged with your mask. It shakes up the setup, shoot, move, setup, shoot, move pattern that the game settles into.

I did run into one minor snag that annoyed me as it is highly inconsistent — supported shots. While going prone is almost always best, bracing your rifle against a railing or other solid object can sometimes let you get additional support, steadying your shot. The problem is that where you can do it isn’t nearly as free-form as I would have liked. Any flat surface the size of a dinner plate is enough to deploy a bipod, and absent that, any railing is enough to brace against or lay on top for a steadier shot. I’d like to see this improved for the next outing from CI as it’s immersion breaking when what is braceable feels arbitrary.

I do have some complaints with the graphical presentation and AI of Contracts. There are a few havok ragdoll moments, and I’ve seen a few enemies that didn’t had no concept of how cover works. They also seem to snap back to patrolling a little too easily, especially when you’ve successfully murdered the person they are supposed to protect. While voiceover lines can sometimes provide useful intel, they also tend to repeat a lot — if I have to hear about the “Wolf Woman” one more time, I’m gonna have to kill everyone in this level. Still, the game can be downright gorgeous at times, even if foes do tend to explode a little more than is realistic.

If you are getting the vibe from this writeup and from the videos that Sniper Ghost Warrior: Contracts borrows heavily from contemporary assassin title, Hitman, you’d be right. The difference here is that Hitman’s sniping feels arcade-like, whereas sniping in Sniper Ghost Warrior: Contracts feels as close to realistic as a game should get. Landing a perfect shot is difficult, as it should be, but when you see that bullet-perspective trigger, watching the round hurtle through the air, zip through a cargo net, spiral under a railing, through a plate glass window, and eradicate the skull of an unsuspecting target, it makes for a macabre feeling of accomplishment.

With only a few hiccups, Sniper Ghost Warrior: Contracts finds the fine line between action arcade and sniper simulation. While the story might be forgettable, landing the perfect shot from 500 meters away never stops being awesome.

Ron Burke is the Editor in Chief for Gaming Trend. Currently living in Fort Worth, Texas, Ron is an old-school gamer who enjoys CRPGs, action/adventure, platformers, music games, and has recently gotten into tabletop gaming. Ron is also a fourth degree black belt, with a Master's rank in Matsumura Seito Shōrin-ryū, Moo Duk Kwan Tang Soo Do, Universal Tang Soo Do Alliance, and International Tang Soo Do Federation. He also holds ranks in several other styles in his search to be a well-rounded fighter. Ron has been married to Gaming Trend Editor, Laura Burke, for 21 years. They have three dogs - Pazuzu (Irish Terrier), Atë, and Calliope (both Australian Kelpie/Pit Bull mixes).
Related Articles: Let's Play, Sniper: Ghost Warrior Contracts
Share
Tweet
Share
Submit