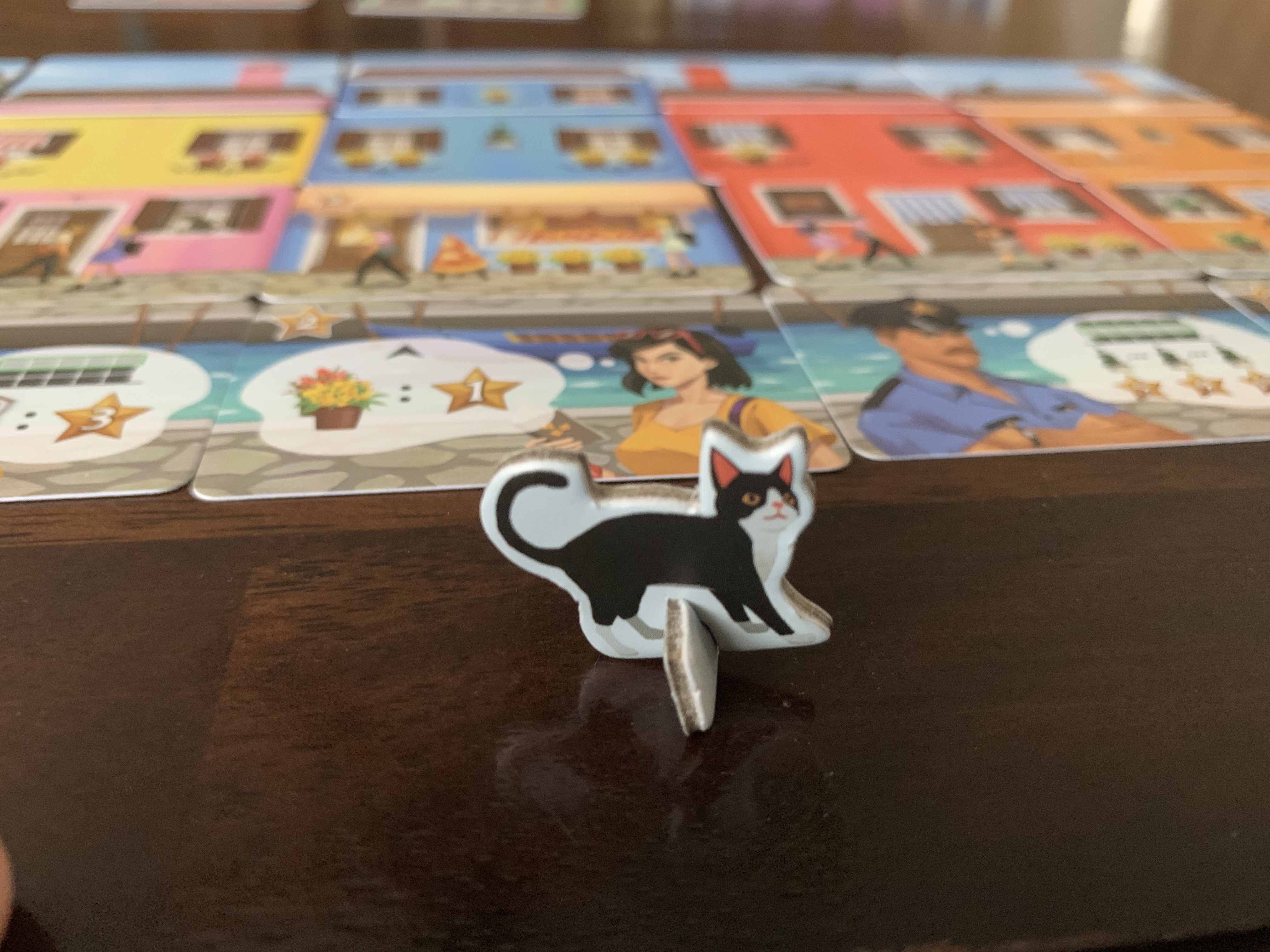 On your left, you see a beautiful waterway which runs through the city, and on your right, you are greeted by the beautiful and vibrant colors of the buildings. You are in the gorgeous Italian city of Burano.

In the game Walking in Burano, designed by Wei-Min Ling and published by AEG, players take the role of workers hired to refurbish and decorate the beautiful buildings of Burano. This game is for 1-4 players, and has players taking turns drafting cards from the center table with the goal of completing five buildings and scoring the most points.

Each player starts with four coins and two scaffolding, which they will utilize to begin refurbishing different levels of their buildings at different times. There are three floors to each building and cards for each of these floors matching the number of players, plus one is placed out for all of the players to view. The first player will then decide which card they would like to take. When taking a card, the player must take at least one card, but can take up to three. They must start taking cards from either the top or bottom of the column. If you want only the middle card, then you’d also have to take the top or bottom card as well. Depending upon how many cards you choose, you’ll also receive coins. The rule of three helps to remind you how much of each to receive. You will always receive three items, so if you take two cards, then you get one coin, and if you take three cards, then you don’t get any coins.

Trying to determine what cards you want to draft might seem difficult at first as there are a lot of different attributes on each card. Some of these include shops, cats, flowers, street lights, and chimneys. Once the player decides which card they’d like, the remaining players will then draft until everyone has taken at least one card. Then the first player will determine if they want to play a card. To play the first refurbished building card, it will cost one coin, and each additional card will cost two extra coins, for a total of 3 cards played, costing five coins. 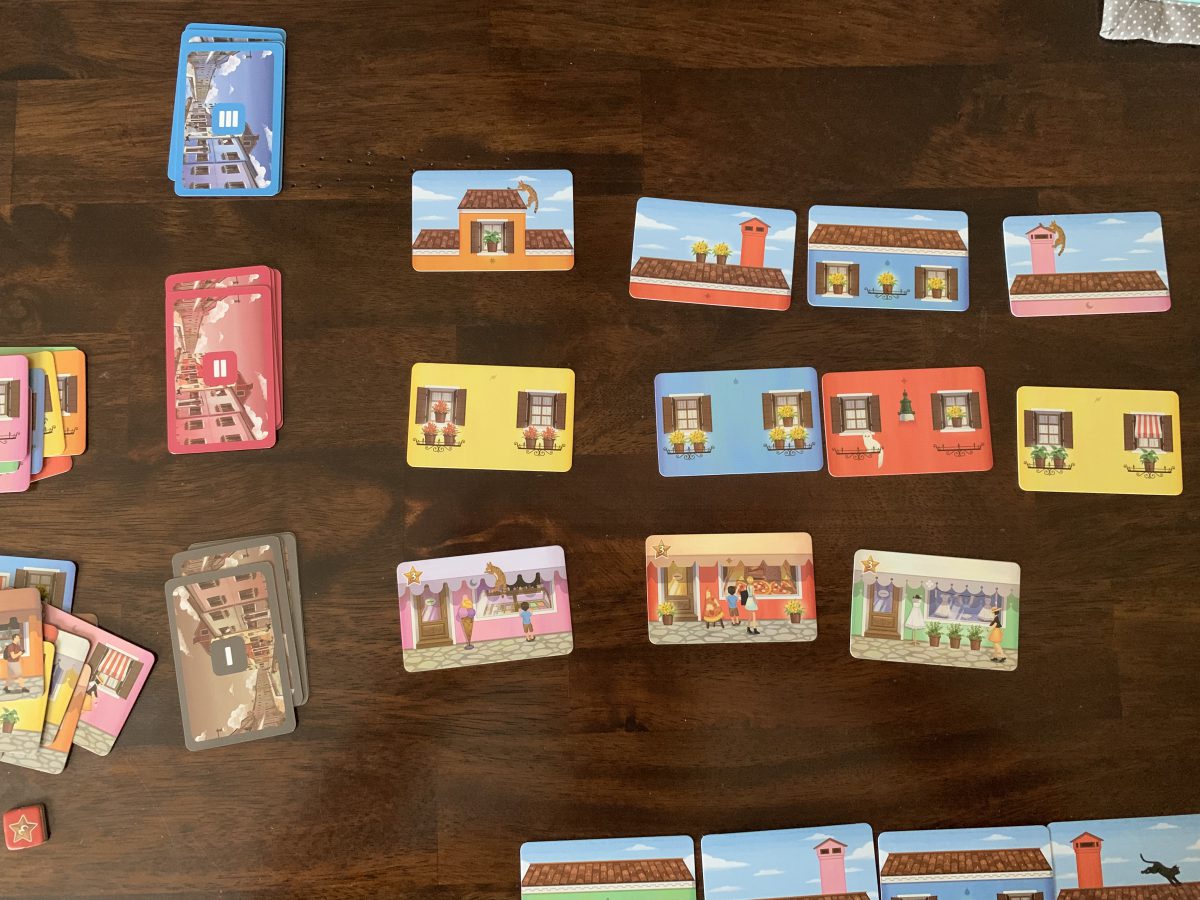 When playing cards, there are rules that must always be followed and some which can be broken. The ability to break certain rules of the game adds to the strategy. The rules that can’t be broken require you to build adjacent to a building you’ve already built and each floor level must go on its appropriate level. There are two scaffolding cards which can hold the place of the 1st and 2nd floor until you have those that you need, but you must use them wisely. You also cannot have more than five buildings in total. The other rules which can be broken require that houses all be the same color and you can’t place the same color house next to each other. To ignore these rules, players will need to discard a regulatory bonus token which is worth 3 points at the end of the game to allow them to ignore this regulation. Doing this might help you complete a building that you otherwise wouldn’t have been able to and receive bonuses.

After a player has played their cards, if all three levels of a building are complete, they can add a character card below their house. These character cards are the primary way that players will score points, and using these players can formulate their strategy about what buildings they want to draft. There are four different tourists and seven various inhabitants who are all looking for different attributes. You might want the girl who is interested in flowers if your house a lot of flowers in it. If it is later in the game and you have a lot of chimneys, then choosing Santa as your character card could be very beneficial. With a limited number of each of these inhabitants and tourists, players will have to adapt their strategies based on what others take.

Once a player completes their fifth building, all other players can continue their turns for the current round and then the scores will be tallied. Players will add their scores based on their characters, the cards that have points listed on them, and also score their remaining regulatory bonus tokens. The player with the most points wins, and in the event of a tie, players will compare their coins, and then the number of cats in their houses. 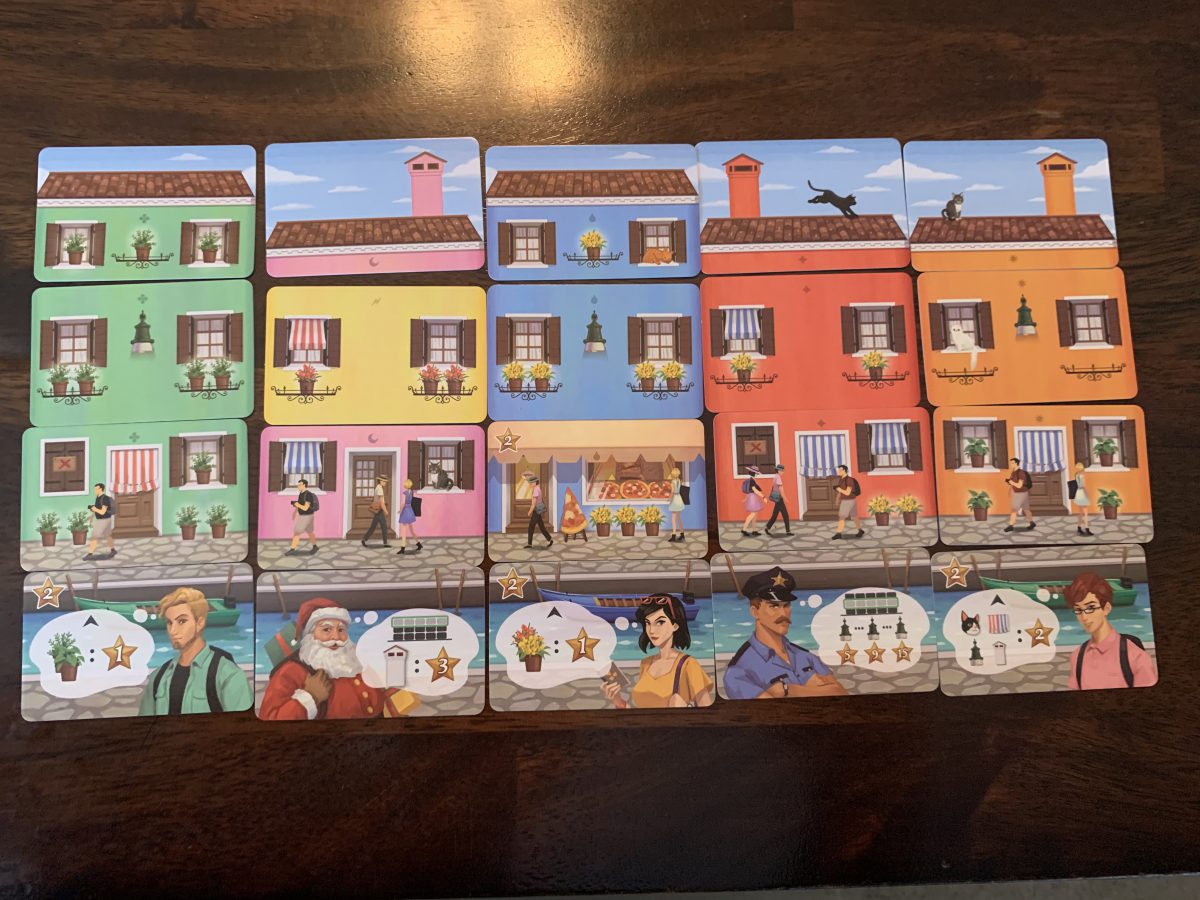 Walking in Burano is a straightforward game to understand but has a lot of strategy underneath the surface. It might seem overwhelming trying to decide what card to choose first. I’ve found that starting with one characteristic at first is best and then adapting your strategy to incorporate other attributes as the game goes on. One game you may decide to try a strategy with street lights and cats, while another game you focus on plants and chimneys. Which one you choose to focus on will depend upon what cards are available when it’s your turn to draft. Speaking of, the aesthetics of the game are beautiful, and the artwork and design of the cards and the characters are amazing.

This is a great game for families to introduce kids to the concept of card drafting without a lot of added complexity. While they may not have a full understanding of the entire strategy of the game, they can formulate a goal they want to focus on and work towards. I played this game with my 15-year-old daughter and my 11-year-old son, and both were able to grasp the game within a few turns. My daughter saw one strategy and she focused on that the whole game, and with the luck of a few card flips, she almost came out the winner. She enjoyed the tense moments of wanting a card and hoping that no one would take it before it was her turn to draft. This suspense, and the need to adapt when someone else takes your card, adds to the fun of the game. The ability to utilize your regulatory bonus tokens as a way to break the rules of the game makes it more manageable and easier to adapt.

The game plays differently at different player counts. At four players,there are a lot of cards and there is a lot more turnover of cards available to draft. This can be good if the cards out there don’t match what you’re looking for, but if you are looking for one specific card, it is more likely to be gone if you’re the last player to draft. A two-player game will have less turnover of cards and is my favorite way to play. The game does add a mechanism which clears the rightmost card of each row to help rotate in new cards. This mechanism can be utilized to line up cards that otherwise might not have come together. At two players, it also feels like you have more control of your buildings as there won’t be as many buildings stolen from you. This interaction will still exist, but it will be at a more predictable level. The game also offers a fun solo play variant which plays very similar to a two-player game but puts the game on a timer by forcing you to remove a character card each turn. Once you complete your five buildings or all the character cards are gone, the game ends.

While the game can be entertaining, it can be frustrating at times when playing on the larger player counts and your strategies are entirely ruined by the previous players taking the cards you needed. This interaction is expected in a card drafting game, but it doesn’t make it any less frustrating. The game also requires that you diversify to achieve the best score. There will be individual cards that feel like they are much better than another card, and if you miss the opportunity to get these cards, it can be frustrating. A card which has multiple cats, a street light, and window cover can be worth a lot of points not only for the character card placed under that house but also for ones placed under other houses as well. That feels much worse than getting just two plants as this only interacts with two character cards for fewer points. If you only focus on one characteristic in your house, then you won’t be open to the large range of scoring opportunities the other cards offer.

Walking in Burano is a fun, lightweight introduction to card drafting for families that offers more complex strategies than would be apparent from the initial glance. While at larger player counts the drafting can be frustrating the ability to break placement rules a few times adds to the strategy and fun of the game.

A father of three with a degree in Mathematics, Jason has spent the last 4 years building his passion for tabletop games. With a collection of well over 300 games he spends a night each week with his family introducing them to new concepts and equipping them with problem-solving skills. Jason enjoys a large variety of games but some of his favorite include Architects of the West Kingdom, Blood Rage, and Terraforming Mars.
Related Articles: Tabletop, Walking in Burano
Share
Tweet
Share
Submit