Video games come in all shapes and sizes, and offer a variety of different gameplay experiences to take part in. One of my favorite aspects of games is exploration. Some games make it a chore, but the ones that make it rewarding and enjoyable are the best. If the exploration is fun enough, then features such as combat don’t matter as much, honestly. That idea comes into play in Dwarrows, a combat-free game that focuses on exploration, village and resource management, and puzzle solving. The three aforementioned aspects have been engaging enough that I haven’t had a desire to fight or do anything outside of my tasks. In fact, I’ve lost track of time while playing Dwarrows, and I mean that in the best possible way.

The story of Dwarrows involves three settlers who are tasked with creating a village and growing a community. Each settler has their own unique tools to help further that goal. The builder has her hammer, the miner has his pickaxe and regular axe, and the explorer has a treasure diviner and the ability to sprint. You even get to name them, so I lovingly named them after the Rescue Rangers. Yes, I’m showing love to my childhood, so what? I named my builder Gadget, my miner Monterey Jac, and my explorer Chip n’ Dale. I needed to get them all in, so I combined the brothers. Anyway, your basic tasks to grow your village are recruiting villagers, building structures, and improving conditions. Balance these three tasks and you’re on your way to success. 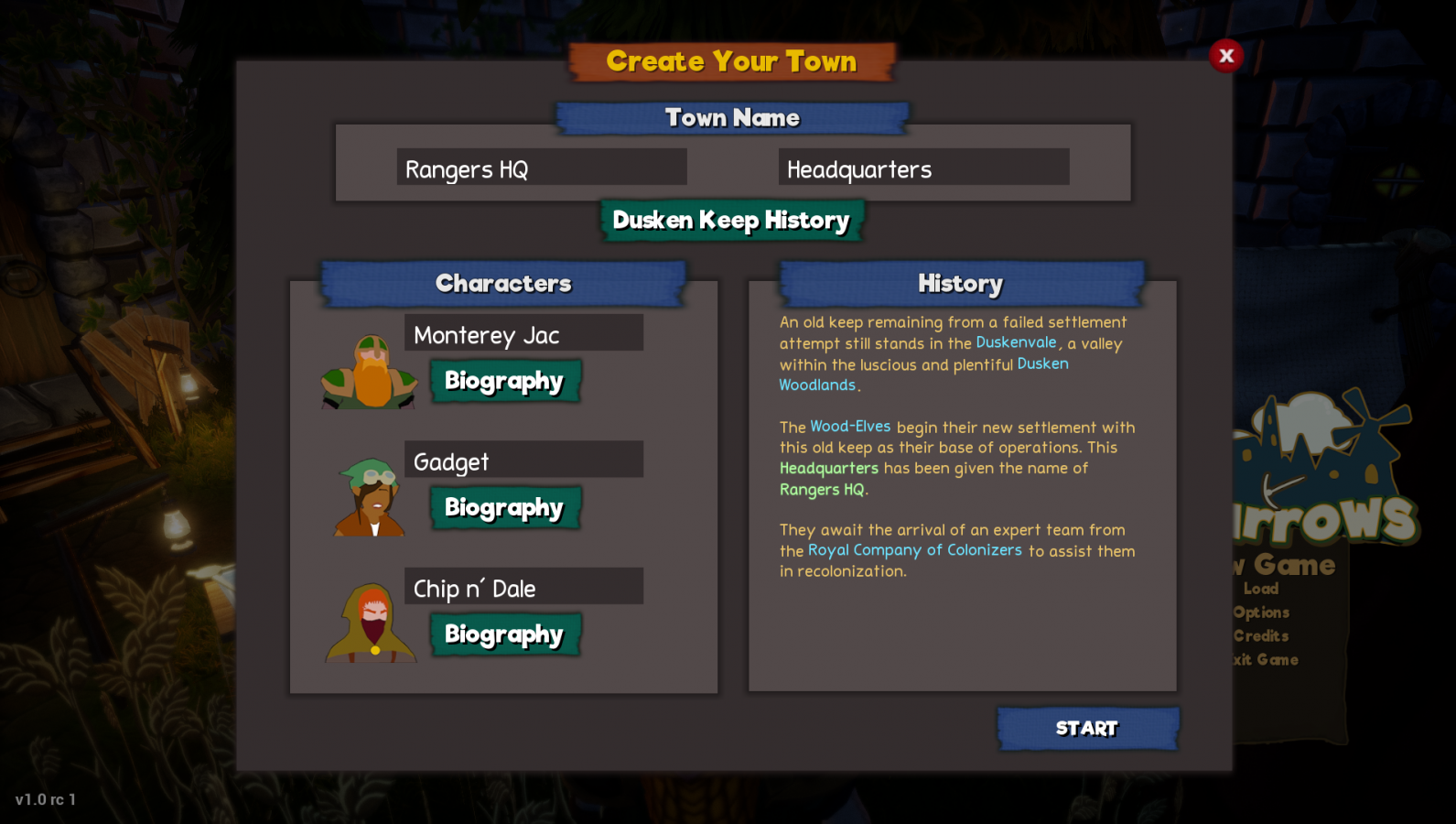 Anyone familiar with town management games and the like knows that there’s a fair bit of planning involved if you want to succeed. If you want people to move into your village, then your first step is to build some homes. Early on you’ll only have tents available, but you can get bigger and better homes down the line. The main way to do this is by using the workbench and hitting the design tab. Once you’ve built a certain structure enough times, then you’ll be able to use the blueprint for that structure in the design tab. By choosing two blueprints (you can do two of the same structure), you can potentially combine them into something new. In the case of tents, this yields a small home. The small home yields a two-story house, and so on. This design feature can be applied to just about every structure you can build. Not everything can be combined, but it doesn’t hurt to try things out. You never know what might work.

After you’ve built places for people to stay, it’s time to do some recruiting. You can find campers out in the woods and all you have to do to recruit them is ask them to join the village. If you have room for them, they immediately move in. The more people you have in the village, the more crowns you collect in taxes. Crowns are this game’s version of currency. Taxes are collected every 20 minutes of play time, which is not that bad of a wait time, especially if you’ve gathered a fair amount of residents. Crowns can be used for tool upgrades and paying tolls. There are toll gates around the world that require you to pay a one time fee to use them and gain access to new areas. 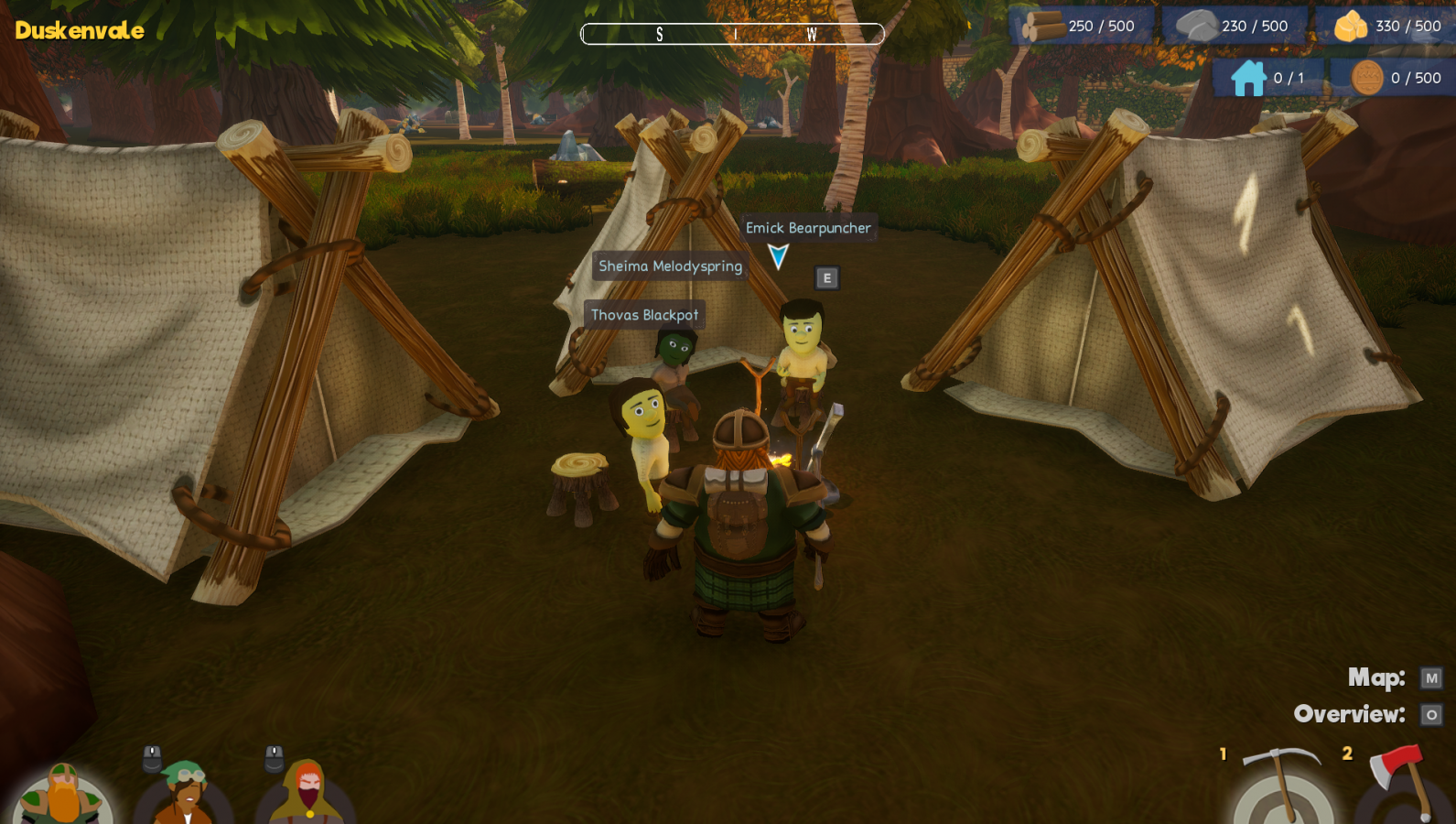 Once you have residents, your next task is to make sure their lives in your village are better than out in the woods. You’ll need to build farms to supply them with food, restrooms to relieve themselves, bathhouses to stay clean, and various other structures to take care of their needs. The point is to make them happy so that they won’t leave. The happier they are, the more productive they’ll be. Higher production results in a thriving community.

The success of your community isn’t just measured by their happiness and how well you think you’re doing; it’s measured by culture, economy, and quality of life. These three aspects are rated from one to five stars, and getting all three up to the next star level results in your town’s total rating increasing. Each structure raises one or more of the aforementioned aspects, so building according to what you need is important. These include homes that improve quality of life, gardens that increase culture and quality of life, markets that improve the economy, and so on. The mayor tasks you with achieving a five star rating, which will take a lot of time, resources, and planning. As of writing this, I’m currently at 3 1/2 stars, and am continuing to push forward. I feel determined and will do whatever I can to hopefully reach that glorious five star rating.

In order to actually build these structures, you need to collect resources. You need to cut down trees to gather wood, mine rocks to collect stone, and mine gold deposits to collect gold. The areas that these resources appear are random, and they respawn in different locations as time passes. This helps ensure that you never run out of resources to collect and makes gameplay that much better. If you don’t have to worry about limited resources in the world, you can play without fear of draining the world of resources. There’s a cap to the number of resources you can have on you at a time, but there are quests that you can complete to increase your maximum capacity. This is a must if you want to progress in any meaningful way. 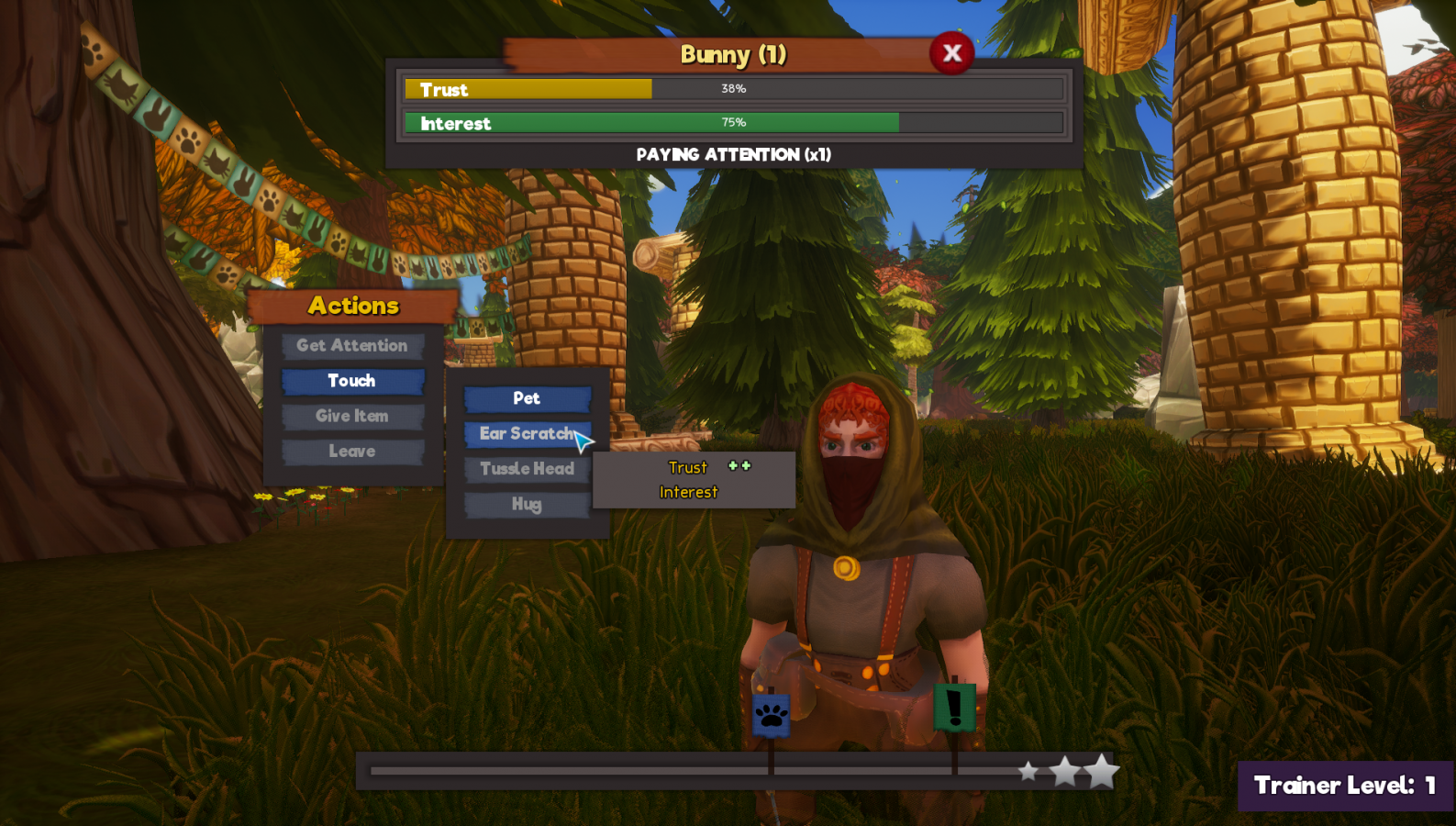 Out in the world, you’ll also run into animals. After meeting the animal caretaker and having her join your community, she’ll teach you how to tame animals. There’s a minigame where you have to balance the animal’s attention and trust. You need to raise its trust to 100% before its attention drops to zero. After choosing an action, you need to quickly time a mouseclick to line up with a star meter near the bottom of the screen. It’s not hard to time, so the only issue is attempting to tame an animal that’s too high of a level. You have an animal taming level that increases the more you successfully tame animals. If you have too hard of a time, then you should leave and build up your level with lower level animals. Tamed animals become pets that you can equip to each of your characters. Each animal offers its own benefits, so equip them accordingly.

As you explore the world, you’ll run into people who offer quests for you to complete. These give various rewards such as resources, soul shards, and echo artifacts. You can also earn these things by discovering them hidden throughout the world or by solving the extra puzzles scattered around the land. These extra puzzles are nice little challenges that test your strategic thinking and help split up the hours of exploration. Echo artifacts are artifacts of days past that you can collect and take to Professor Moony in your village. You can have him restore them by spending soul shards that you’ve collected. The artifacts are separated into sets, and completing an entire set unlocks a special structure for you to build. You won’t know what you’ll get until you’ve completed the set, so it’s a nice surprise. The best thing I’ve gotten so far is the small garden. It’s helped so much with raising culture. 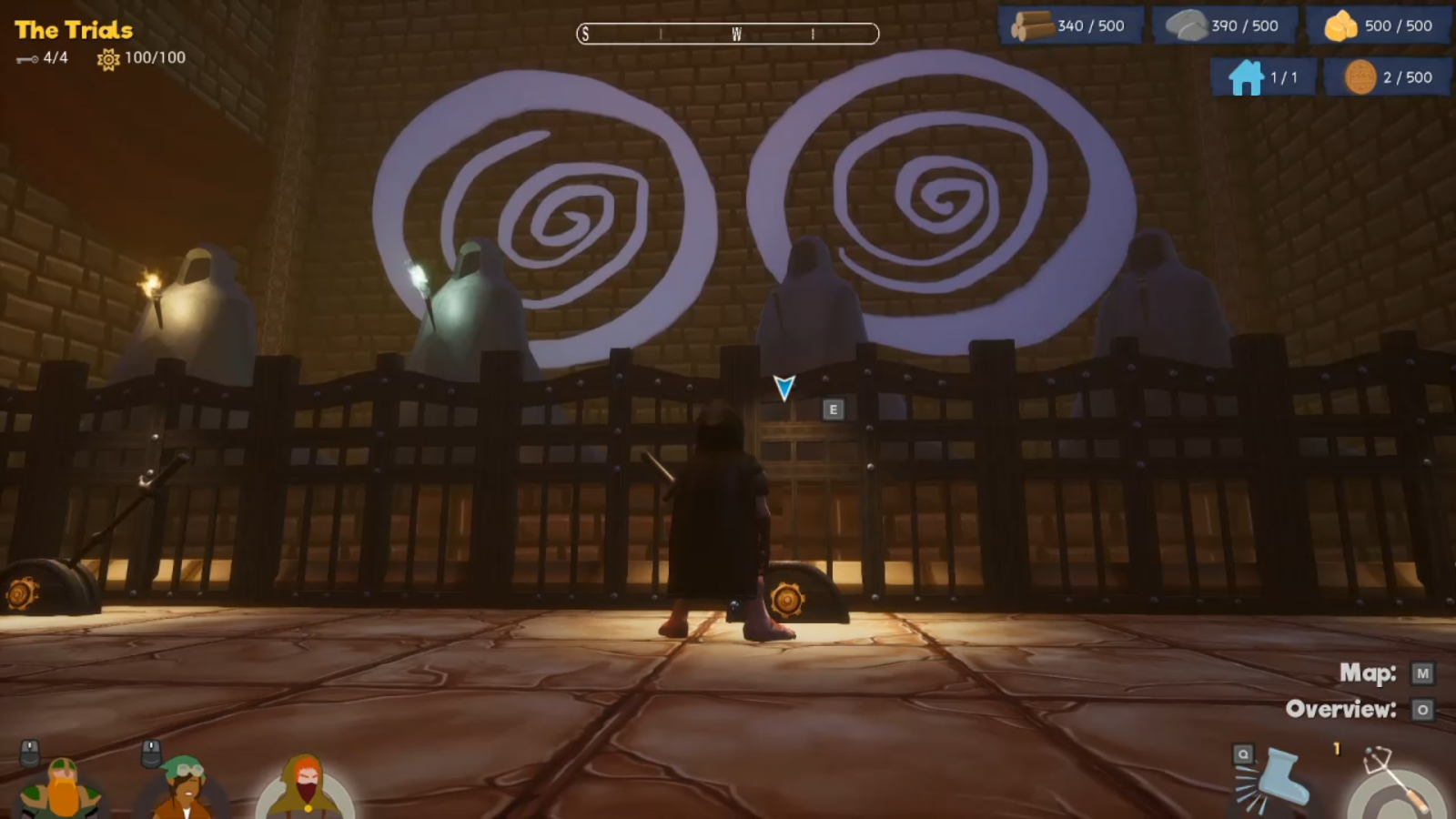 There’s an overarching story of sorts, which involves mysterious trials. You meet a mystical being named Wat who guides you to the various trial locations and helps you out once you’ve entered the trials. These trials were meant as a rite of passage in the old days, but have long been lost to time. Now it’s your time to complete them and prove yourself to Wat. The trials are collections of large indoor puzzles. The later trials get more complex and put your puzzle solving skills to the test. I’m curious to see what happens once all of the trials are completed. Maybe something crazy or fantastical? I sure hope so.

Dwarrows makes an interesting stand by including exploration and puzzle solving without combat. That being said, it doesn’t need combat to be good. I’ve played plenty of hours of Dwarrows, and I plan to play plenty more. The resource management, town building, and exploration have pulled me in and become a time sink for me. Once I start playing, I don’t want to stop. Not everyone will be captivated by Dwarrows the same way as me, but for those who want to peacefully explore and grow a community from the ground up, you won’t be disappointed. The puzzles and progression are rewarding, especially after seeing how far you’ve come with your town. I didn’t expect to like the game as much as I did, but look at me now. The point is, Dwarrows is well worth the time and money, so if you’re interested, keep an eye out for it when it releases on Steam on February 28th.

Dwarrows mixes town building, resource management, puzzle solving, and peaceful exploration into one enjoyable package. The lack of combat may turn some off, but it's not a detriment to the game. The various tasks, rewarding progression, and relaxing gameplay make this a winner for sure.

Codi loves to play video games and watch movies. He will watch almost any kind of movie just to experience them. His ideas take inspiration from the shows and movies he watches, and games he plays. He also loves a good pun.
Related Articles: Dwarrows
Share
Tweet
Share
Submit