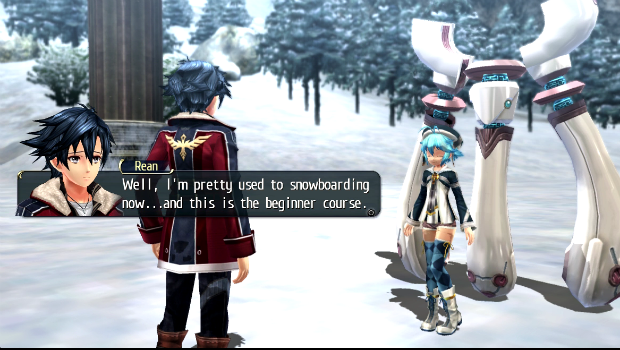 If you were defeated by a large, powerful robotic guardian, it’d be understandable to run away and flee. Rean Schwarzer is not that kind of guy; after a cliffhanger ending left players wondering at the resolution of PlayStation Vita RPG The Legend of Heroes: Trails of Cold Steel, a direct sequel has arrived on western shores and allows main character Rean grab his sweet revenge.

The Legend of Heroes series had a really strong entry with the original Trails of Cold Steel, and the sequel does a great job of remaining true to its predecessor. If you didn’t play the original, however, you’ll definitely want to consider playing that first. There is a visual novel-like breakdown of the original game’s story that is available at the main menu, but it works more as a refresher than a true retelling.

The story of Trails II begins with our hero Rean Schwarzer waking up on some mountains, having been removed from a battlefield against his will. Beaten, confused, and afraid that he has lost his friends, Rean begins his return to form, function, and the Academy that nurtured his abilities.

The game has a nice story, albeit a tad predictable. The characters of the Trails of Cold Steel series are as stereotypical, trope-laden and overtly hyper-polite in this sequel as they were in the original, but there is a certain aspect of development and growth that is nice considering that the overall story consists of students entering a special academy.

As for gameplay, Trails II might be at the very top of today’s offerings for JRPGs. Towns are fully explorable zones with townspeople, shops, and life going on all around you. Exploring the world is dynamic, with beautiful detail and topography that makes a rather linear space feel open and free.  Characters are nicely varied in terms of abilities, and can take advantage of link abilities with one another to bolster their effectiveness.

Beyond simple world exploration, Trails also provides a number of special events, tasks, and abilities that deepen the immersion and provide extra challenge.  Fishing for sport and money is an important part of the game, even early on.  Later in the game, you are able to drive a motorcycle.  Little things like this are the spice that makes Trails II so tasty.

Battles are also highly stylized and well put together events in Trails II. The matches are turn-based, and characters can do one action, be it move, attack, use a special skill or item, or attempt escape. Placement of characters and distance become crucial aspects that require extra strategy. Characters have “Arts” which are attack and support spells, “Crafts” which are special attacks, and “S-Break” abilities that do heavy physical damage.

Trails II uses two different skill bars, one for arts and one for crafts. While the art bar depletes once used, requiring resting or items to restore it, “Craft Points” return slowly over each turn. This leaves you with some form of special attack to use, and just another set of parameters to strategize with.  The special “S-Break” attacks can be used out of turn, allowing a character who may be coming up after an enemy attack to get in early and swing the tide.

For a Vita release, the graphics are really spectacular. Character models are detailed and fully animated animated, as are almost all cutscenes; no cheap thrills here. I love the way that everything has a high-end PlayStation 2 feel, with fully modern smoothness and detail. I think that Trails II balances an old school and modern aesthetic very well. Controls are smooth, and menus are simple to learn and navigate.  The music of Trails II is delightful, but that is very much par for the course with Falcom.

The Legend of Heroes: Trails of Cold Steel II

Patrick Rost has been with Gaming Trend since 2013. At first focused on sports coverage, Patrick has gone on to cover a wide range of games and other products for the website. Outside of Gaming Trend, Patrick writes and records music, grinds perpetually in Elder Scrolls Online (PS4), and lives day to day with his two dogs, Bob and Stella.
Related Articles: The Legend of Heroes: Trails of Cold Steel II
Share
Tweet
Share
Submit