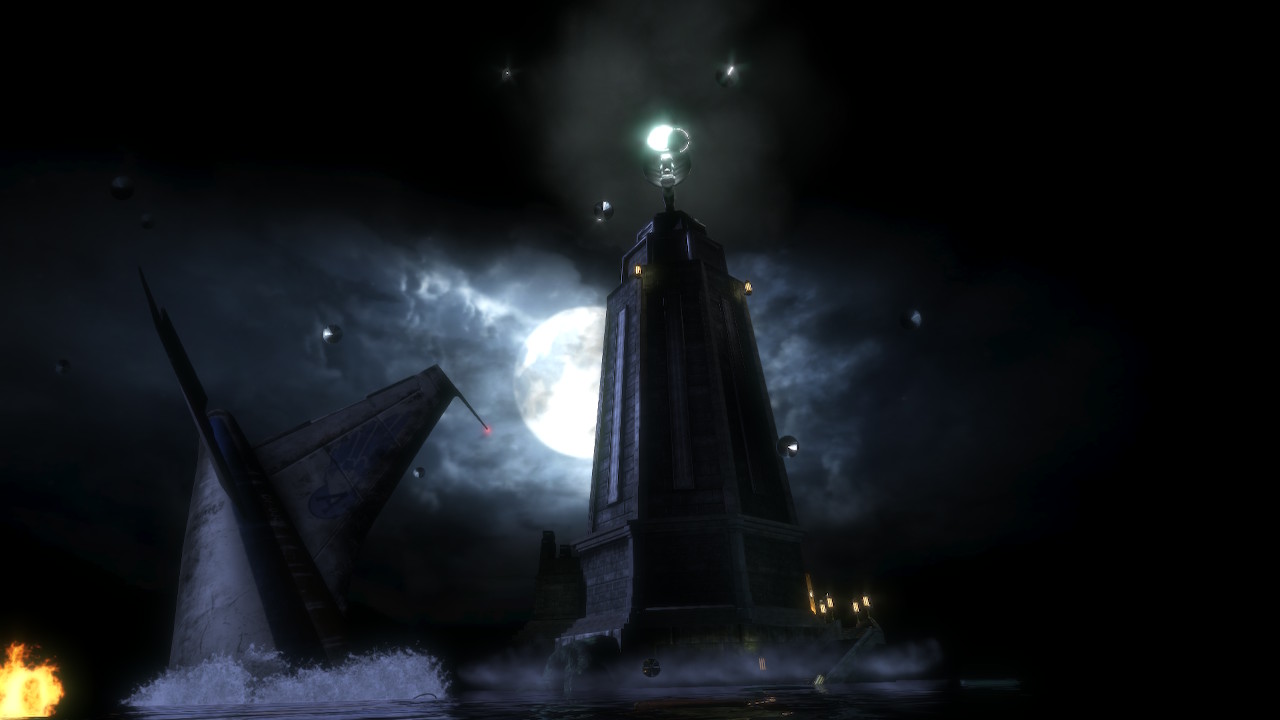 The rate at which technology evolves is matched only by the industry’s growing ambition. But while we rightfully celebrate the deluge of new, cutting-edge titles that have spoiled us this generation, it’s only fair that we take the time to appreciate the classics. The Switch has quickly become the de facto device to enjoy the game-changers of generations past. And though Nintendo itself has blessed us with myriad modern hits, only one thing can fill that BioShock-shaped hole in my heart. With BioShock: The Collection making its debut on the Switch, I can finally get my fix anytime, anywhere.

The trio of games run at 1080p at a serviceable, stable 30 frames per second, save for BioShock Infinite — its visuals proving to be too much for the Switch to handle. Frequent frame drops punctuate the experience, despite rock-solid frame rates in the remastered versions of BioShock and BioShock 2. The underwater vistas of Rapture and the high-flying set pieces of Columbia look incredible in handheld mode, despite the lower resolution. It’s only when docked that players can easily spot the shortcomings of the Switch port. Coming off of the PlayStation 4 and PC versions of the collection myself, the rough anti-aliasing and textures took me a while to get used to. Such compromises are par for the course, but the gameplay remains as compelling as ever.

Gaming Trend is in love with the trilogy; we’ve had nothing but praise for the masterpieces, and sing that praise at every opportunity. Each game spawned endless discussion, and for good reason — Rapture and Columbia are home to some of the best stories in the medium, and each game tells those stories in their own unique way. Expect a dozen or so hours of gripping narrative out of each, with a few extra for DLC. 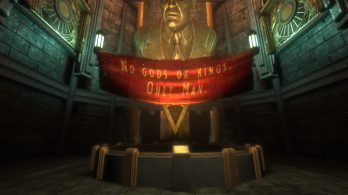 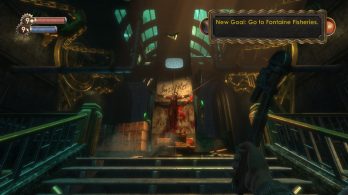 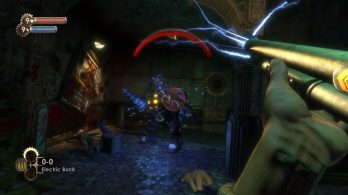 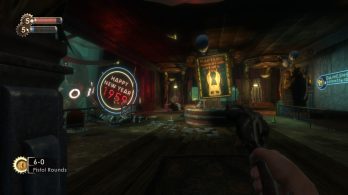 The original BioShock is perhaps the most revered of the bunch, and rightly so. Rapture is home to some of the most memorable characters in gaming, and some of most memorable gameplay moments. Andrew Ryan and company set the stage for a near-endless pool of emergent gameplay outcomes; players fight tooth and nail for scraps in a city gone to hell. A splash of survival and a dash of horror set the perfect mood for translating the game’s many themes from paper to gameplay.

Its iconic opening and jaw-dropping twists are no less potent than they were 13 years ago. Its visual style has stood the test of time, and so has its story. The unorthodox, unmappable controls, however, have not. Accidental health pack consumption, awkward jumps, and more are small hurdles that have to be overcome. What’s more, is that the control scheme differs from game to game. On account of the console, the game also features hyper-aggressive aim assist, not just for enemies but loot and interactables as well — another small nuisance. 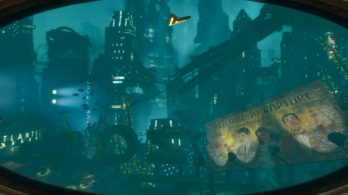 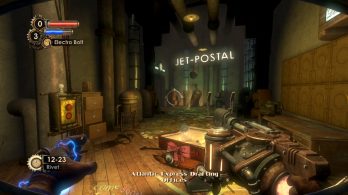 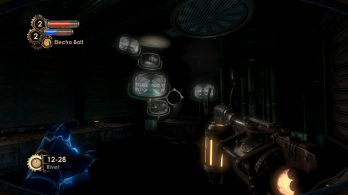 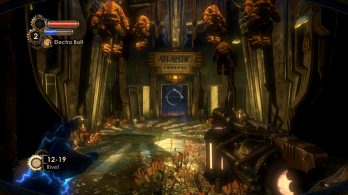 BioShock 2 is often dismissed as BioShock’s younger, less inspired brother. Seen as a game purely riding the coattails of its predecessor, BioShock 2 spent years as the black sheep of the BioShock franchise. While its contributions to the BioShock mythos can be argued, its gameplay was anything but inferior. Quality of life changes across the board, combat especially, completely elevated how we interface with Rapture. And, if you find its main story lacking, Minerva’s Den is often touted as the single best piece of DLC across the entire franchise. A touching, bittersweet tale paced perfectly, and with unparalleled combat, it is the underrated gem within another underrated gem.

Often disregarded as “tacked-on multiplayer,” BioShock 2’s multiplayer was unique in its own right and had previously built up its own cult following. Unfortunately, the BioShock Collection disappoints yet again. Like with previous ports of the collection, BioShock 2’s signature multiplayer is nowhere to be seen. What’s even odder is a main menu void of an options submenu, something that was present in previous iterations of the collection. To tweak any settings, I had to start up a new game first, then open the pause menu. And for features like HD rumble, the options menu was a must. Playing as a hulking Big Daddy, every bump and jump was followed with an excessively violent rumble that quickly became annoying. 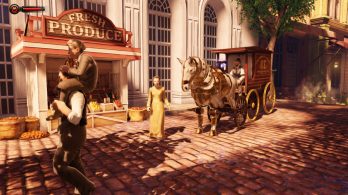 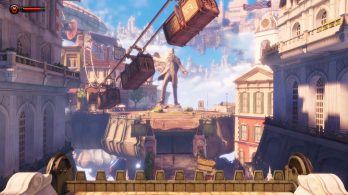 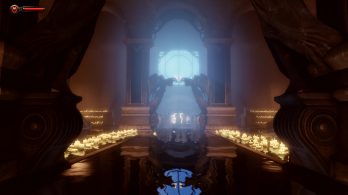 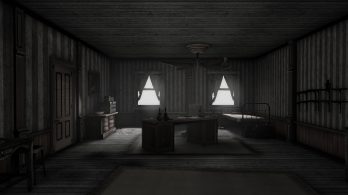 BioShock Infinite brings the franchise home with a new take on the BioShock formula (read: complete reversal), and a few heart-wrenching DLCs to unite the cities of Rapture and Columbia. Above the clouds is a city built on religious fanaticism, greed, racism, and time-traveling atoms. Between the time-traveling “twins,” the dimension-hopping Disney princess, and a radical prophet, Infinite provides arguably the most for players to chew on, narrative-wise. Its linear, streamlined gameplay has been a point of contention over the years, but no one can deny the unforgettable journey of Booker and Elizabeth. The two-part Burial at Sea reunites Infinite with its slower, methodical roots — what many consider to be where the franchise has always excelled.

With the most comprehensive options menu, including a choice between several control schemes, Infinite was by far the easiest to play. What’s surprising, however, is that in the game demanding the most precision is the least oppressive aim assist. I found myself in numerous sticky situations where a more lenient aim assist could’ve kept some frustration at bay. Switch controllers are not optimal for shooters of this nature.

With all that being said, the shortcomings of the Switch port are easily forgiven when the proposition of a portable BioShock is on the table. All three are phenomenal games that could face off against any modern-day juggernaut, but only the BioShocks can be played on the go.

Each game could easily go toe to toe with any modern-day juggernaut, but only the BioShocks can be played on the go.

A self-deprecating, overly sarcastic pair of glasses that occasionally possesses a human host in order to partake in the delightful process of playing video games, then immediately complaining about them. When he is not playing games (a rare occurrence), he can be found either writing about things that no one cares about, or haunting the quiet streets of his Canadian suburb.
Related Articles: Bioshock: The Collection
Share
Tweet
Share
Submit