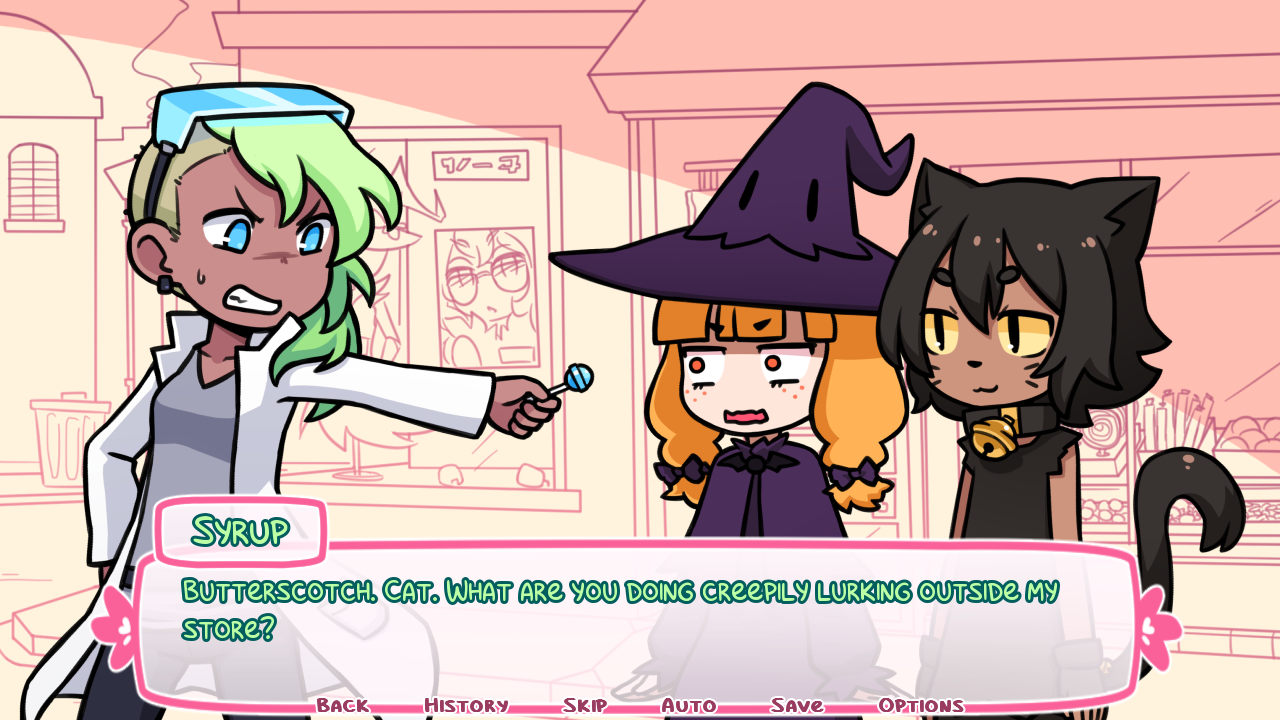 I appreciate Ratalaika Games’ approach to releasing small titles, and I’m especially glad the company made a subdivision imprint specifically for visual novels. The first under this line, Syrup and the Ultimate Sweet, is a simple yet endearing visual novel that wraps up pretty quickly but has enough charm with its art style and characters to make it worth your $4.99. 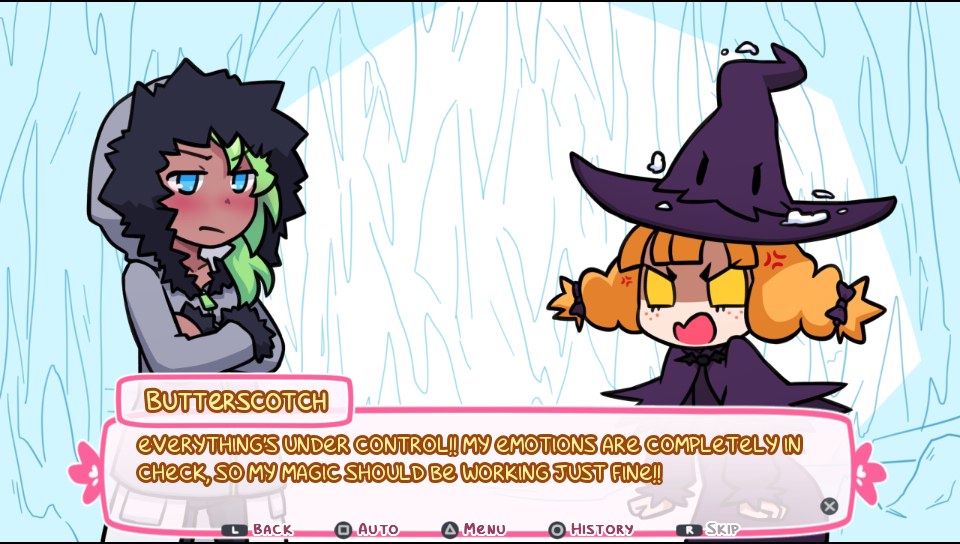 Syrup and the Ultimate Sweet follows candy alchemist Syrup, the owner of a candy store called Atelier Sweets. One day, she comes face to face with a candy golem. While the golem exists to be eaten (and in one ending that cuts the game off in minutes, you can do this), Syrup has other plans and names her Gumdrop. Depending on how you play the visual novel, you explore Syrup’s world as she interacts with an eclectic cast of other characters, from the insufferable but secretly caring witch Butterscotch to Syrup’s helper Pastille. There are 10 endings included, with some easier to achieve than others. Like most traditional visual novels, there are choices you can make that will influence what you do and how you interact with characters.

For a visual novel that only lasts around an hour or two, I did enjoy my time with Syrup and her friends. While she does seem like a cold, aloof type that only cares about candy science, her rivalry with Butterscotch and the science vs. magic conflict worked pretty well here. I also enjoyed how you can grow kinder to Gumdrop (who looks awfully similar to Adventure Time’s Princess Bubblegum), sparking a neat route and ending if you play your cards right. The relationships and personalities seem genuine, and I was always interested to see where I would go next. 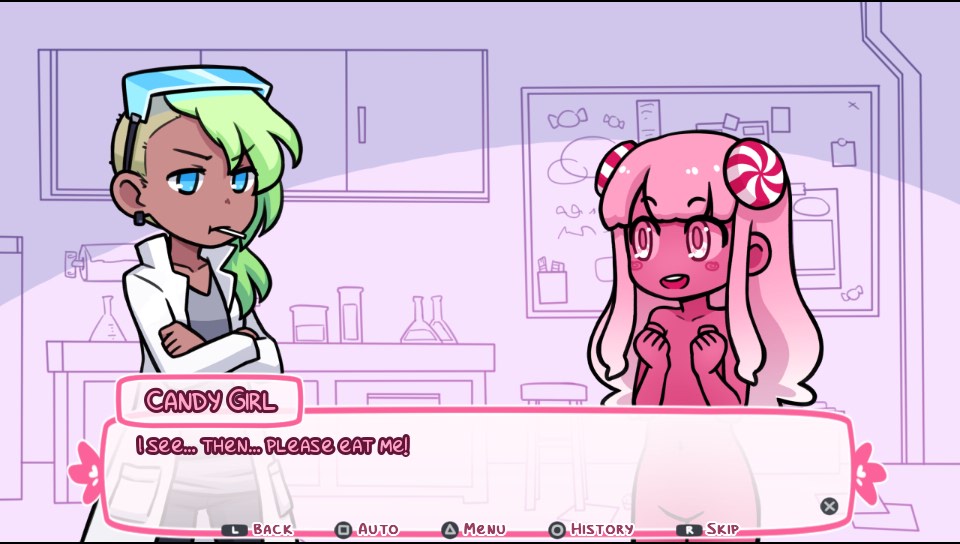 Really the only reason this game is rated T for partial nudity.

I’d also want to commend the adorable art style of this visual novel. It’s in a brightly-colored style that feels like something out of a western cartoon, and it really gives Syrup and the Ultimate Sweet a nice feel. The music, while nothing too special, complements the dessert-themed sprites and backgrounds, and even though it’s a traditional visual novel (i.e. no special gameplay quirks), it still follows a logical path towards the routes. I didn’t feel stuck trying to unlock an ending, and there were some obvious flags and choices to make if I wanted to pursue a specific route.

Probably the biggest issue with Syrup and the Ultimate Sweet is that it’s finished too soon. It’s on the very short side of a visual novel, clocking it at a little over an hour if you want to get every route. That said, the story feels self-sufficient and doesn’t drag on; I just wish I could spend a little more time with the cast. Perhaps we can get a sequel in the future, but for now, the length can be an issue for someone who’s expecting an extra long epic. 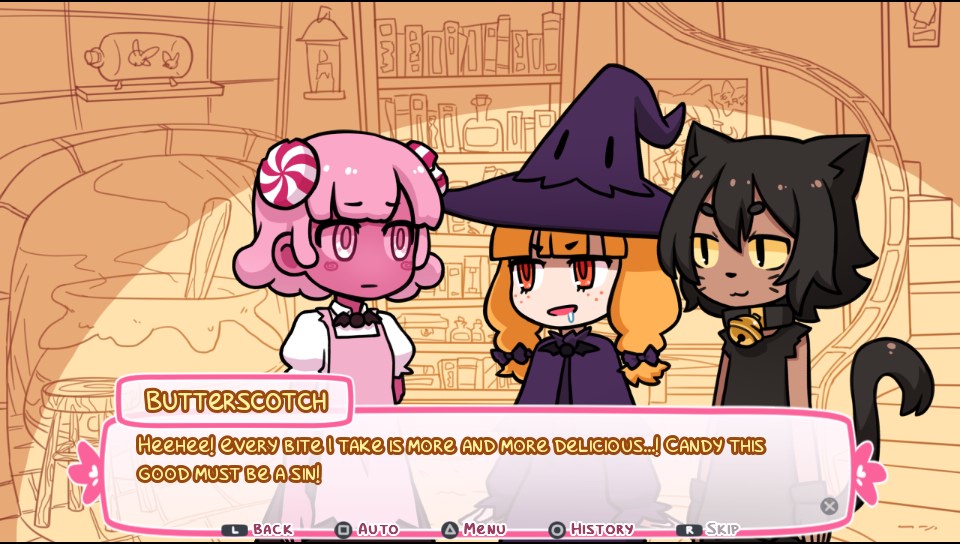 Syrup and the Ultimate Sweet

A little too short to be wholly delectable, Syrup and the Ultimate Sweet is still a lighthearted visual novel that’s worth its $4.99 asking price.

Elisha Deogracias is an aspiring accountant by day, freelance writer by night. Before writing for Gaming Trend, he had a small gig on the now defunct Examiner. When not being a third wheel with his best friends on dates or yearning for some closure on Pushing Daisies, he's busy catching up on shonen manga and wacky rhythm games. Mains R.O.B. in Smash. Still doesn't know if he's a kid or a squid.
Related Articles: Indies, Syrup and the Ultimate Sweet
Share
Tweet
Share
Submit