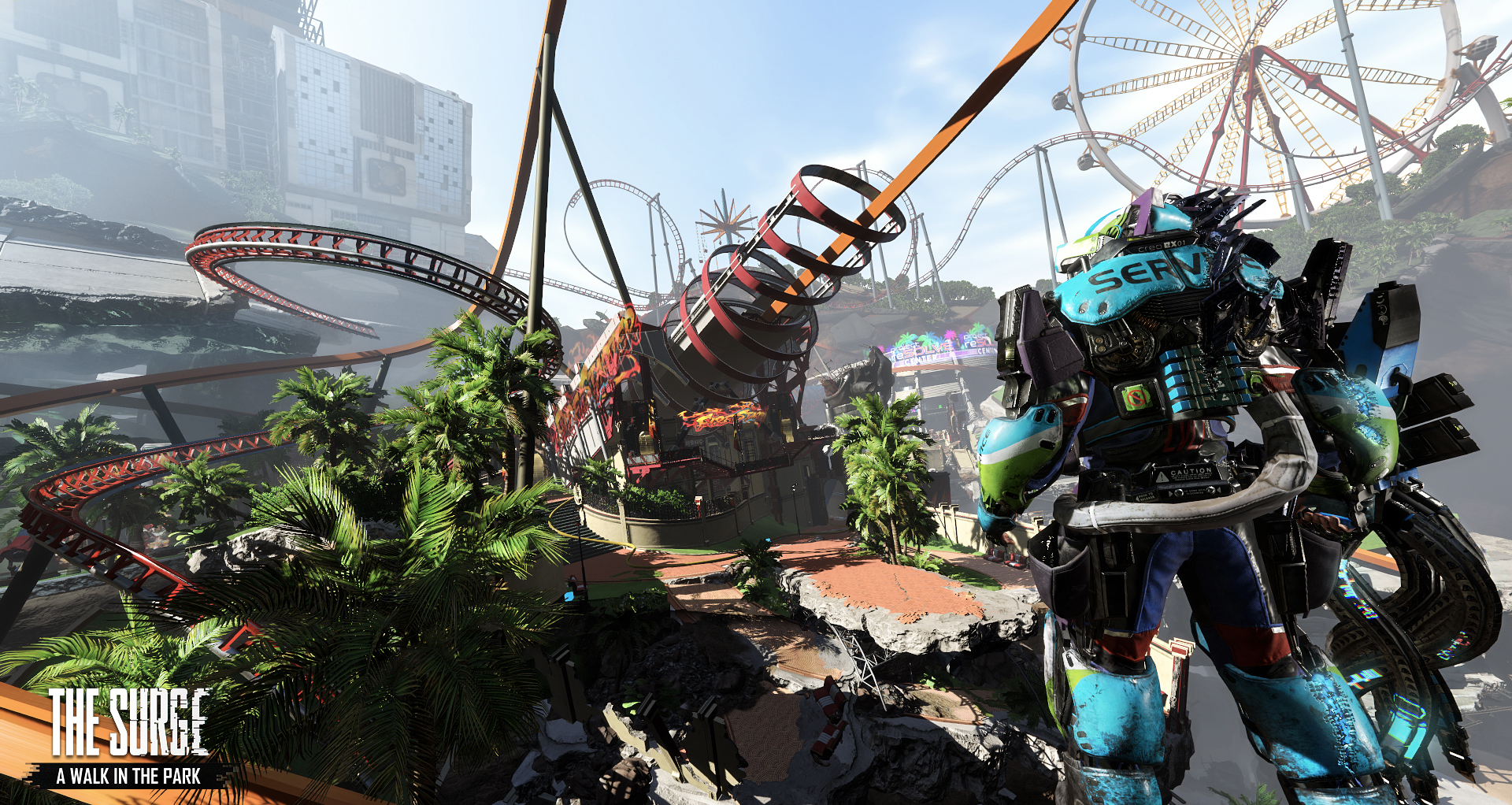 The Surge was one of the major surprise hits for me in 2017. Unique, addictive, and challenging as hell, this was a title I found myself still playing long after my review went live. With the game’s first major piece of DLC, A Walk in the Park, Deck 13 takes players to the theme park owned by villainous super-corporation,CREO. There, players will fight bizarre new enemies, explore comical new areas, and relish in picking up this awesome game again.

At large, A Walk in the Park remains the same as The Surge’s core game. The story focuses around a dystopian future caused by a company called CREO, combat is slow-paced and very unforgiving, and boss fights are rare but provide some of the game’s most interesting encounters. None of that has changed. And yet, A Walk in the Park carries with it a distinctly different tone that makes it stick out like a sore thumb. The theme park that you traverse is every bit as dangerous as the rest of the game, but its danger is hidden by a thick coat of silliness and light-hearted fun. You’ll fight mascots dressed up as a donut, ride a rollercoaster to traverse the area, and enjoy the bright colors and open areas that are a vast departure from The Surge’s core campaign.

The comedic tone is a huge departure from the core game’s dramatic narrative, but manages to be a light-hearted detour that doesn’t feel out of place. The premise is silly and the enemies are oftentimes bizarre, but every step of the way the player is reminded of the game’s larger narrative. In the second half of the DLC, you begin seeing enemies influenced by the nanobots present in the later half of the core campaign, and your search for answers in CREO Park inevitably tie into the events taking place at CREO headquarters. The over-the-top enemies and environments present at CREO Park actually feel like a sensible next step for a game that nailed its main campaign, and wants to give players something new, optional, and unrepentantly fun.

And while A Walk in the Park has a few truly memorable moments to offer players, it sadly ends as quickly as it begins, which is my biggest issue with the content. It nails its premise, and offers a cool new experience, but ends just as the player finds themselves getting into the swing of things. All told, A Walk in the Park can be beaten in fewer than two hours. I started the expansion in the middle of my New Game+ playthrough and blew through the content in a single sitting. The DLC only costs $15, so I was expecting a ton, but I would have liked Deck 13 to have taken the opportunity to explore CREO Park a little more and give players a wider variety of things to do.

That said, A Walk in the Park manages to offer many additions to The Surge’s sandbox that will have long-lasting effects on the player’s experience playing the game outside of the DLC itself. Many new armor sets and weapons have been added, including more than a few that aren’t terribly practical, but are just hilarious to use. You can swing a candy cane around as a weapon, and wear a silly mascot helmet while exploring CREO labs. Enough new gameplay options have been added to breathe new life into a game that was already begging to be replayed.

I should also mention that several quality of life updates have made their way to The Surge since my initial review of it earlier this year, and two of my biggest complaints, in particular, were addressed. Firstly, the game has received a 4K patch for the Xbox One X and now runs and looks better than it did when I reviewed it by a mile. The game now almost never drops a frame, and has more color and detail than I could have hoped for from a patch like this. I dare say that The Surge is downright pretty on the Xbox One X, which is quite a departure from what I experienced in May. The developers also fixed an issue where performing an execution would move your character’s positioning on the map, sometimes causing you to fall off a cliff and die in a terribly frustrating turn of events. In playing A Walk in the Park, on several occasions I found myself quickly getting pulled back into my initial positioning when encountering this issue. While it looks very jarring to see your character inelegantly moved back into safety when you would have normally fallen to your death, I was impressed as hell that they fixed this major annoyance to players. Both of these fixes did wonders in improving my experience with A Walk in the Park.

The Surge: A Walk in the Park

The Surge: A Walk in the Park is an over-the-top, hilarious expansion to a great game that sadly ends far too quickly .

You know that jerk online that relentlessly trash talks you after every kill? That guy was probably Travis "Tie Guy" Northup. Competitive, snarky, and constantly wearing a tie, Travis has been writing his opinions about electronic media since he was a teenager, and is pretty much the only person to hold his opinions in high regard.
Related Articles: The Surge: A Walk in the Park
Share
Tweet
Share
Submit