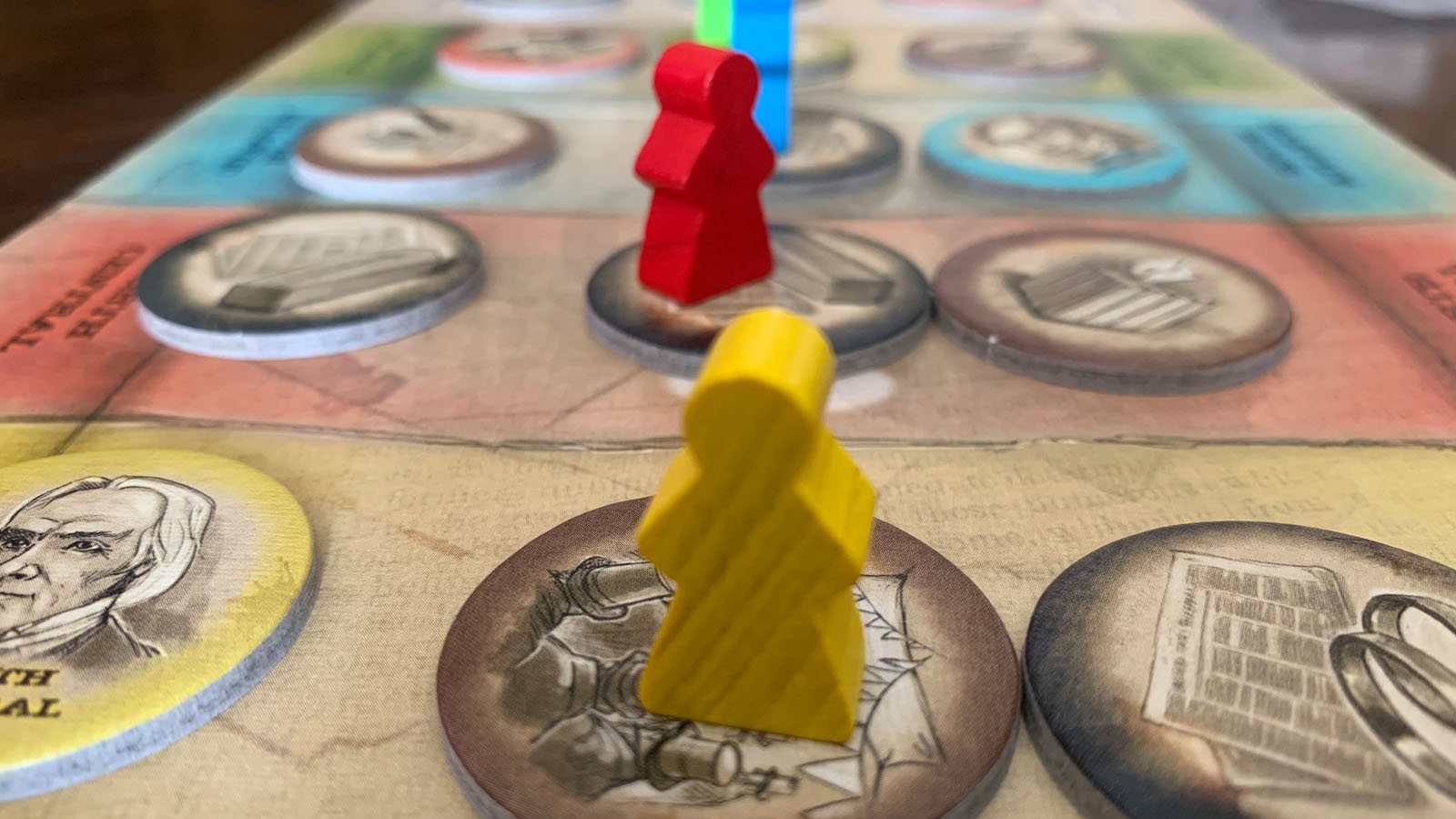 It’s 1828 and the candidates are doing everything they can to get votes. Nothing is off the table and smear campaigns are in full force. Welcome to the Revolution of 1828.

In the game Revolution of 1828, designed by Stefan Feld and published by Renegade Game Studios, players take the roles of the candidates vying for the votes of the people. In this game for two players, you will be working for John Quincy Adams or Andrew Jackson to see who can get the most votes after four rounds and become President.

The game board is broken into six sections. There are five campaign areas which correspond to different areas of the country and an area for the press. To set up each round, players will randomly pull tiles from a bag and place three election tiles on each of these six areas. Once every area is full, players will alternate taking an unclaimed election tile. If they take the last tile from an area, they get to immediately take another turn and get to claim the elector from that area. If a player takes the last tile from the press area, they take the editor which will likely be negative. 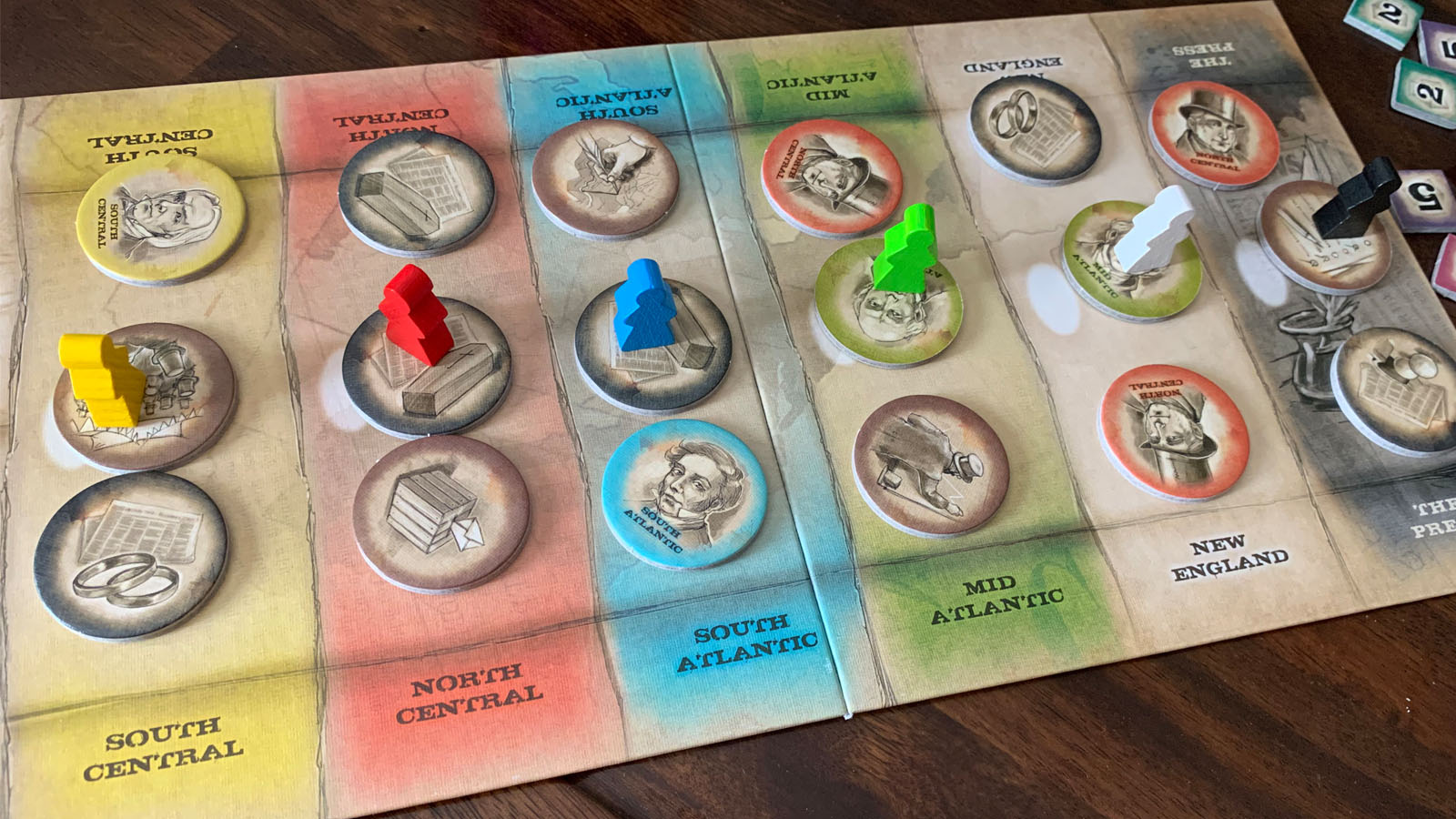 The types of tiles which players draft are broken into three types: delegates, smear campaigns, and campaign actions. The delegates correspond to the different areas on the board. If a player has the most of a color for one area, they will gain one point; however, if the other player doesn’t have any, they gain two points. Whoever won the elector for that area will get one point for each delegate in that area. This encourages players to win the elector for areas with a lot of delegates or prevent the other player from getting the elector for those areas.

Smear campaigns are wild and can be placed on any area and count towards having the majority in an area. These come with a cost though. If a player takes the editor from the press area, they will have to give votes to the other player equal to the number of smear tokens they have on their side. This is because the press has caught you and exposed the lies you were trying to spread. The final type of tile are the campaign actions and these tiles introduce variable powers. When drafting these tiles many give an immediate effect which will change the board. Some allow the player to move tiles on the board, and others will allow you to give away smear campaigns or take a delegate from your opponent. At the end of the round the player with the most of these campaign actions will receive 3 votes.

Once votes are handed out for the campaign tiles, the areas are scored, and the press editor takes care of the smear campaigns. The board is reset and the next round begins. All delegates and campaign tiles are put back in the box and three new tiles are pulled for each area. The smear campaigns remain throughout the game and makes players cautious of taking smear campaigns because of the risk of the editor. After the four rounds are completed the votes are totaled and whoever has the most wins.

The historical information included in the rule book of this game is amazing. It fully explains the setting of the election and describes both candidates. It also breaks down what happened during the actual election and shows the basis for the smear campaign tokens used in the game. Players can learn about how these were used in the real election and the effect that they had.

The game play for this game was a mixed bag. Starting with the positive, the game offers many choices when drafting your tile. A player can try to focus on delegates of a few areas or spread themselves out and balance these choices with the campaign actions. These campaign actions are what really make the game different and exciting. Forcing a player to draft from a specific area can be game changing, or giving a player your smear campaign can help them in an area but hurt them if they have the editor. This back and forth drafting and trying to determine what the next player will take based on what is on the board can be fun.

This is where my primary issue came, however. Each area starts with three tiles, and the goal is to win each elector but not the editor. If one player takes from one location and the second player takes from that same location the first player can take the last tile, win the elector, and get to go again and take another tile from a new area. Obviously, the second player wouldn’t want to do this so they will most likely take one from another area. The game continues in this method until there are now two tiles in each area. Almost every game and round I played had this happen where we just took one from each area without thinking. While we did need to decide which of these tiles we wanted, this seemed almost automatic and a waste of time. It felt like we just needed 3 random tiles each and then have a board of 2 tiles for each area.

As mentioned, there can be some strategy when deciding which tile to take and using the appropriate powers, the beginning of every round felt like a waste. When only two tiles in each area remained it then became a back and forth. I would take a tile and the other player would win an area and take another tile leaving only one remaining. On my turn I would do the same thing. This could be changed with campaign tile powers but in general this was how the round played out. After the game was over it left me feeling like my options were limited even though there were so many options on the board. The component quality was one of the redeeming qualities as the bag was very nice and the pieces were nice and thick, but the game behind it was missing something. 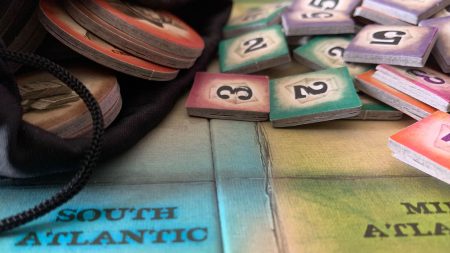 Revolution of 1828 has an amazing historical basis and can be exciting with the variable powers available, but many of the options you are taking seem required which removes the true flexibility to choose. There is room for tactics and strategy at times, but overall it feels like you are just going through the motions.

A father of three with a degree in Mathematics, Jason has spent the last 4 years building his passion for tabletop games. With a collection of well over 300 games he spends a night each week with his family introducing them to new concepts and equipping them with problem-solving skills. Jason enjoys a large variety of games but some of his favorite include Architects of the West Kingdom, Blood Rage, and Terraforming Mars.
Related Articles: Revolution of 1828, Tabletop
Share
Tweet
Share
Submit