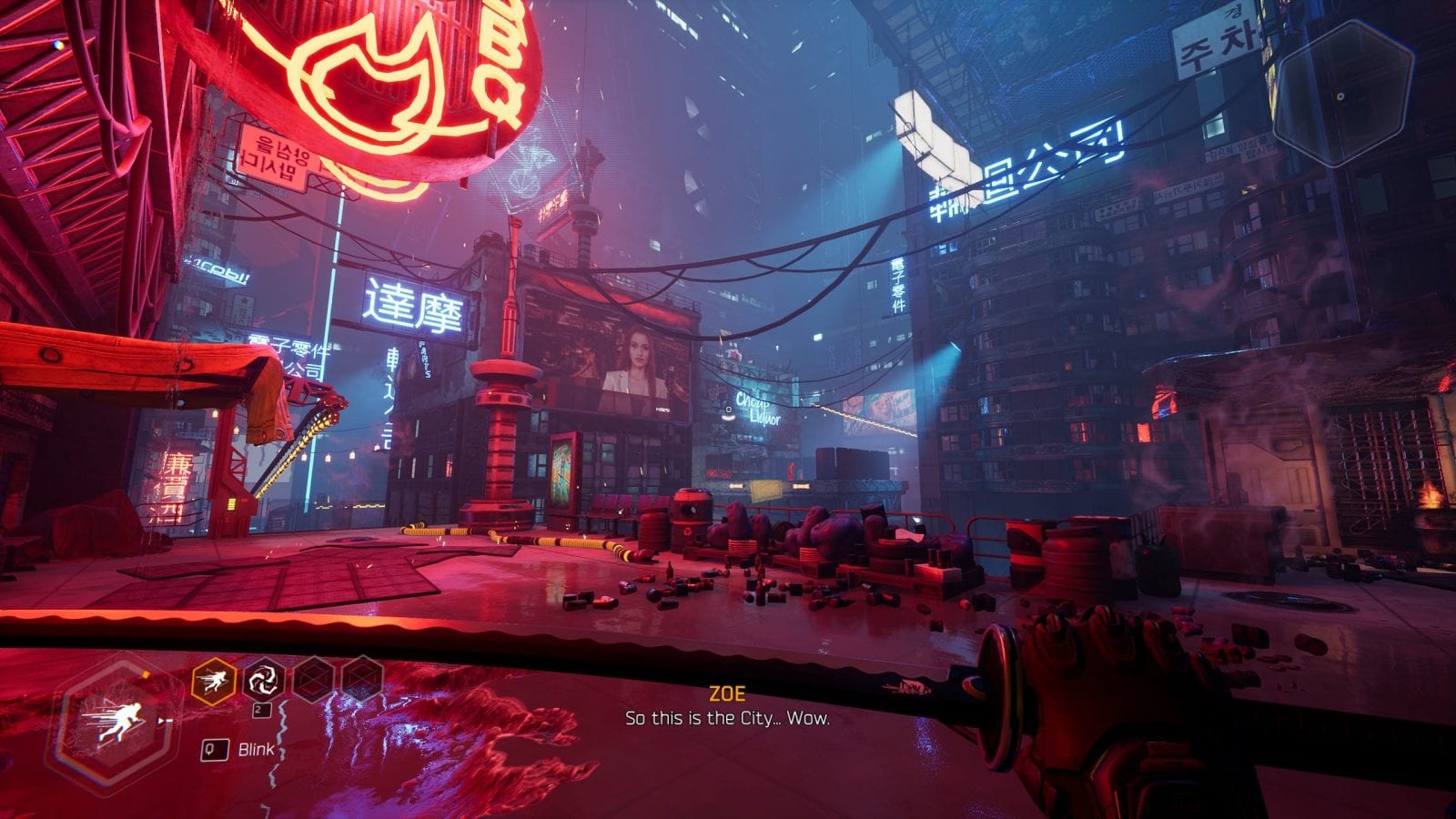 This has got to be the year of the Cyberpunk genre. Not only is Cyberpunk 2077 coming out “soon” (hope I don’t eat my words in writing that) and Observer: System Redux getting ready for next-gen consoles this month, but also the highly-anticipated title Ghostrunner is now available in all its glory. And I’ll put it to you straight; I loved Ghostrunner.

Ghostrunner is a title that takes a little from the competition and makes it its own. With a cyberpunk-inspired soundtrack, one-hit kills and deaths, and instant respawning (this is an amazing feat that I’ll touch on later), there’s a little of the Hotline Miami series sprinkled into this game. Coupled with Mirror’s Edge’s parkour system, and basically any game with a katana as your primary weapon, you’ve got Ghostrunner. Ok, I’ll admit that is a very barebones description of Ghostrunner, but you get the idea. 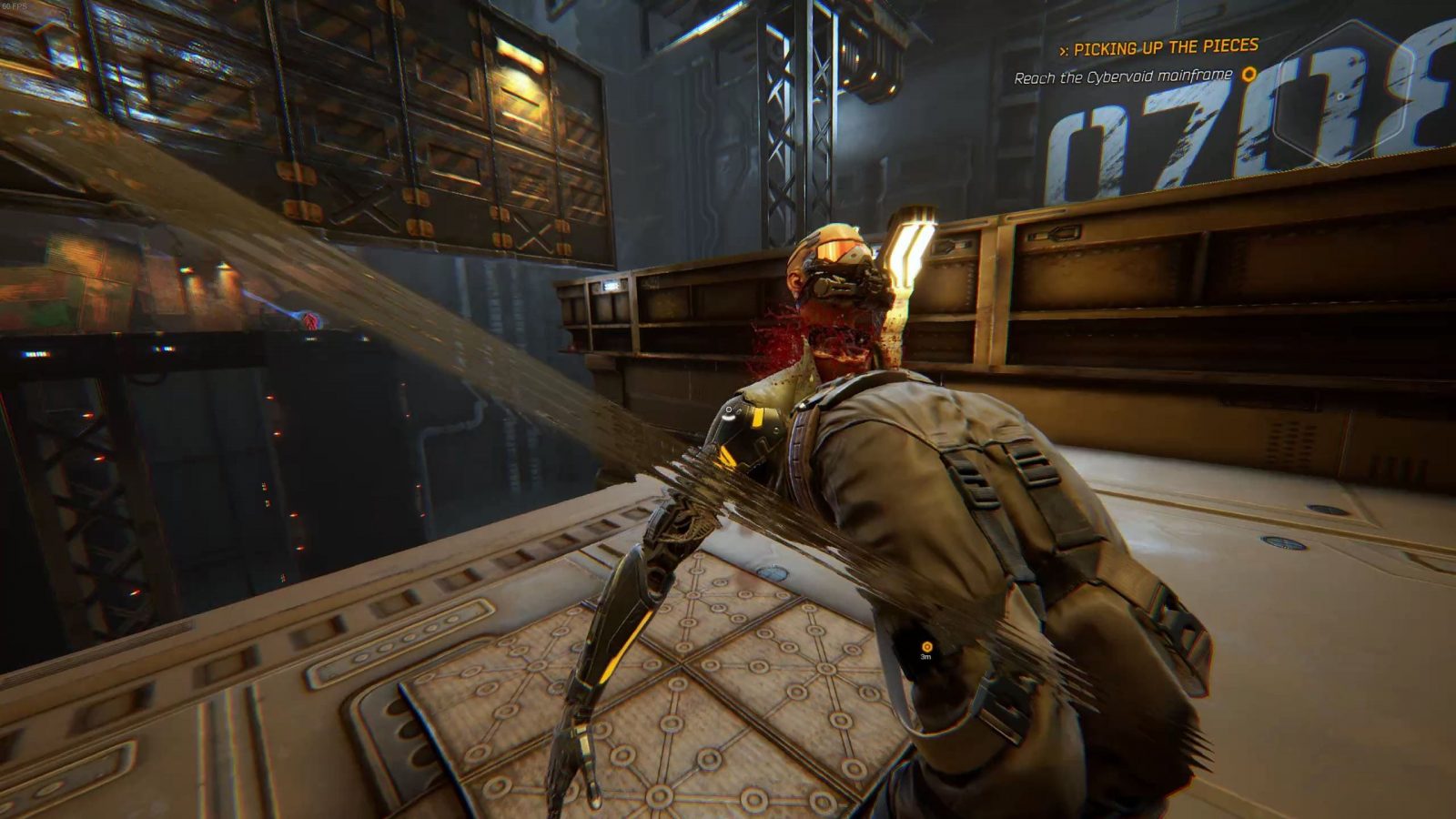 Seem’s like you’ve lost your head, and… ah… torso

Side note: This review will contain a lot of spoilers, read at your own risk.

Before we delve further into the gameplay, let’s discuss the story. This is arguably the weakest part of Ghostrunner as it doesn’t attempt to revolutionize its premise, and is honestly quite predictable. You play as Jack, a Ghostrunner, and the last of his kind. After losing a fight with Mara, known as the Keymaster and the main villain of the game, Jack awakens in Dharma Tower with no memory of his past. After being repaired by Zoe, a member of the rebel group the “Climbers”, he’s then directed by the Architect to find and kill Mara. Who’s the Architect you ask? He’s the preserved mind of Adam who initially created and ruled Dharma Tower before Mara’s coup. He’s got a bit of a shady past, and that’s touched on a number of times throughout the story.

The basis of the story is solid; simple hooks, a villain that we can identify and hate, and the Ghostrunner learns about the history of Dharma Tower and the Climbers as he progresses through the massive arcology. It’s towards the end of the game that the story starts to drop off, specifically at the end of the second last level. Again, what the writers have established before that part is solid, and there’s no real issue other than it doesn’t blow anything out of the water. However, as soon as you defeat Mara, the Architect announces his true plan; one which means the Ghostrunner must be sacrificed. 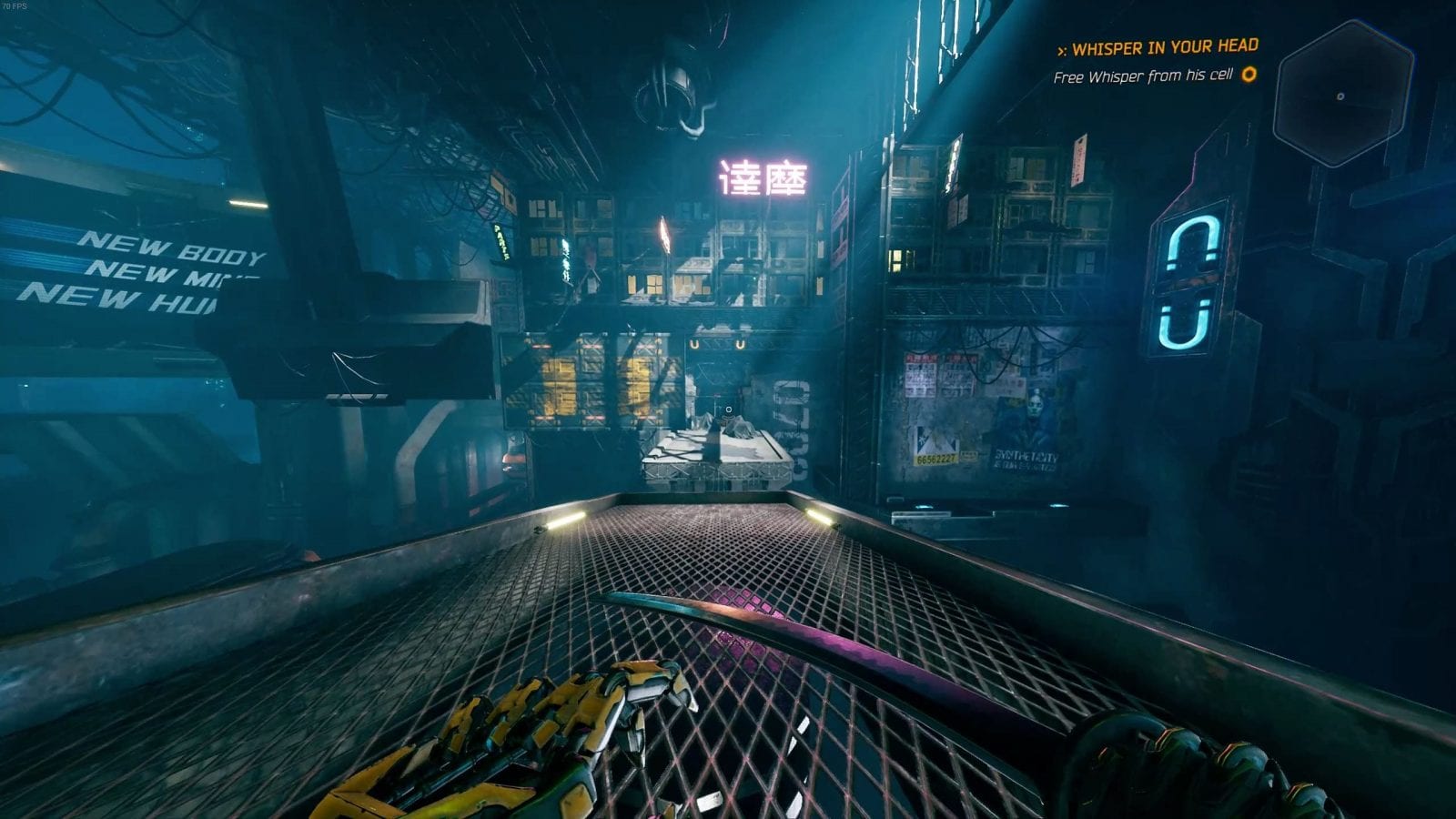 This game has no right to be this pretty

Look, I think everyone who played Ghostrunner could agree they saw this coming; you’ve got a shady voice in your head telling you what to do and whose shutting down any prying questions that Jack might have about him or Mara. Here, the issue is that it was such a sudden change in the plot that it kind of feels just thrown in, and that’s largely due to the fact that as soon as he announces this plan you’re onto the very last level of Ghostrunner; one which has you fight hunt down, and kill, the Architect in the Cybervoid. The player is given no time to comprehend that information, whereas in the rest of the game the player is given information in bite-sized chunks and that provides the game with a sense of mystery and ambiguity. If there were a few more levels between killing Mara and killing the Architect, there wouldn’t be a problem. Unfortunately, Ghostrunner trips on its feet right at the finish line.

But, just because the story drops in quality towards the end, doesn’t mean the gameplay does. And that’s the part where Ghostrunner shines, and boy does it shine bright. 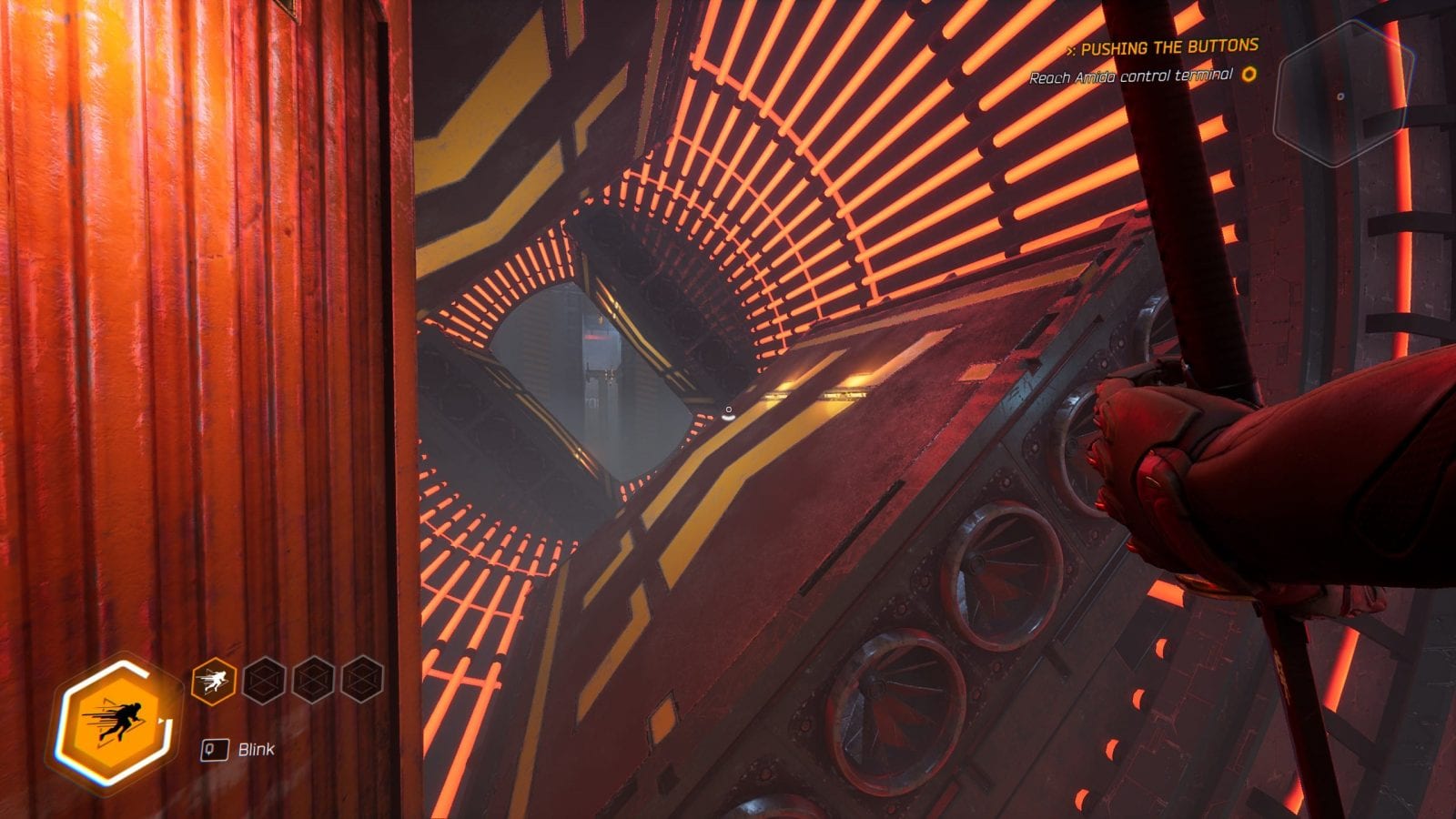 Honestly, the gameplay is nothing short of amazing. There are so many things that provide a wholly positive experience for the player. Firstly, let’s touch on the optimization. This game runs at 70 FPS on Ultra graphics on my GTX 1070. That’s amazing for my fairly old GPU, and that also means any stronger GPU will net way higher framerates on Ultra graphics as well. Another major bonus to the optimization is the instant respawning system. Just like the Hotline Miami games, one hit means death for both you and your enemies, so there’s a lot of times you’ll die during segments until you’ve fully mastered them. If there was a loading screen between each death, I think I would’ve given up and not completed it. The fact that this game runs amazingly, looks beautiful, and doesn’t have any framerate drops is an incredible feat.

Secondly, let’s talk about gameplay mechanics. While players will notice a lot of similarities with games like Mirror’s Edge, Ghostrunner also has a few tricks up its sleeve to call it its own. The Ghostrunner can dash, climb, slide, jump, wall-run, and grapple, all while moving at high speeds and play The Floor Is Lava for the entire game. The Ghostrunner can also use a variety of abilities to keep them one step ahead of their enemies. There are Passive Abilities that come stock with the Ghostrunner, like the Sensory Boost that slows down time and enables mid-air strafing to avoid enemy fire, or Energy Abilities that allow you to kill large amounts of enemies with ease, such as Blink that enables you to target multiple enemies in a line and kill them in a single dash attack. Energy Abilities are unlocked as your progress through the game. 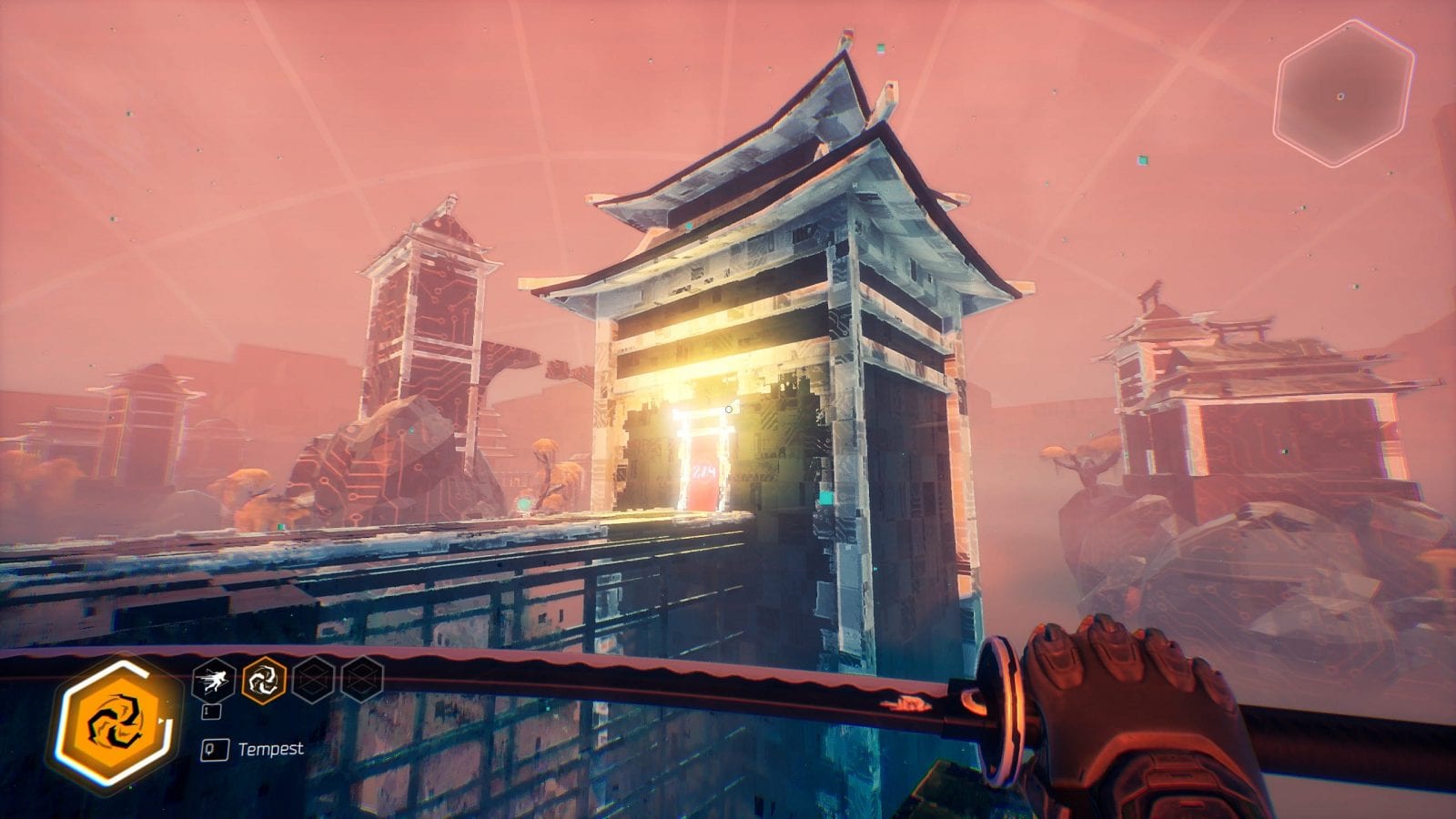 Make your way through the Cybervoid, unlocking abilities along the way

Another thing that you unlock over time are upgrades. This is a fun minigame in itself, where you’ll effectively play Tetris to slot and stack each upgrade; making use of all the space available. The upgrades available suit every type of player, and enhance any strategy you can muster. These upgrades include longer duration on abilities, more Sensory Boosts, lower ability cooldowns; the list goes on and on.

As well, there are a few tricks that players can utilize that the game doesn’t directly tell you, such as dashing into a slide, then jumping at peak velocity to reach insanely high speeds. There are plenty of these kinds of speedrunning tactics that players can use to bypass entire stretches of platforming. If anything, it’s highly rewarding to discover tricks and exploits for a game that’s defined around taking the word Speedrun and turning it into a game.

You’ll fight your way through Dharma Tower against all kinds of enemies, such as the Key (who wields a pistol that fires like a double-action revolver), the Warden (who carry katanas and must be parried before killing them), and the Mech (who blast you with a horizontal laser). Each enemy must be attacked in a different way, like using Sensory Boost to dodge the Key or using the environment to navigate out of the way of the Mech’s blast, and that will constantly keep you on your toes. 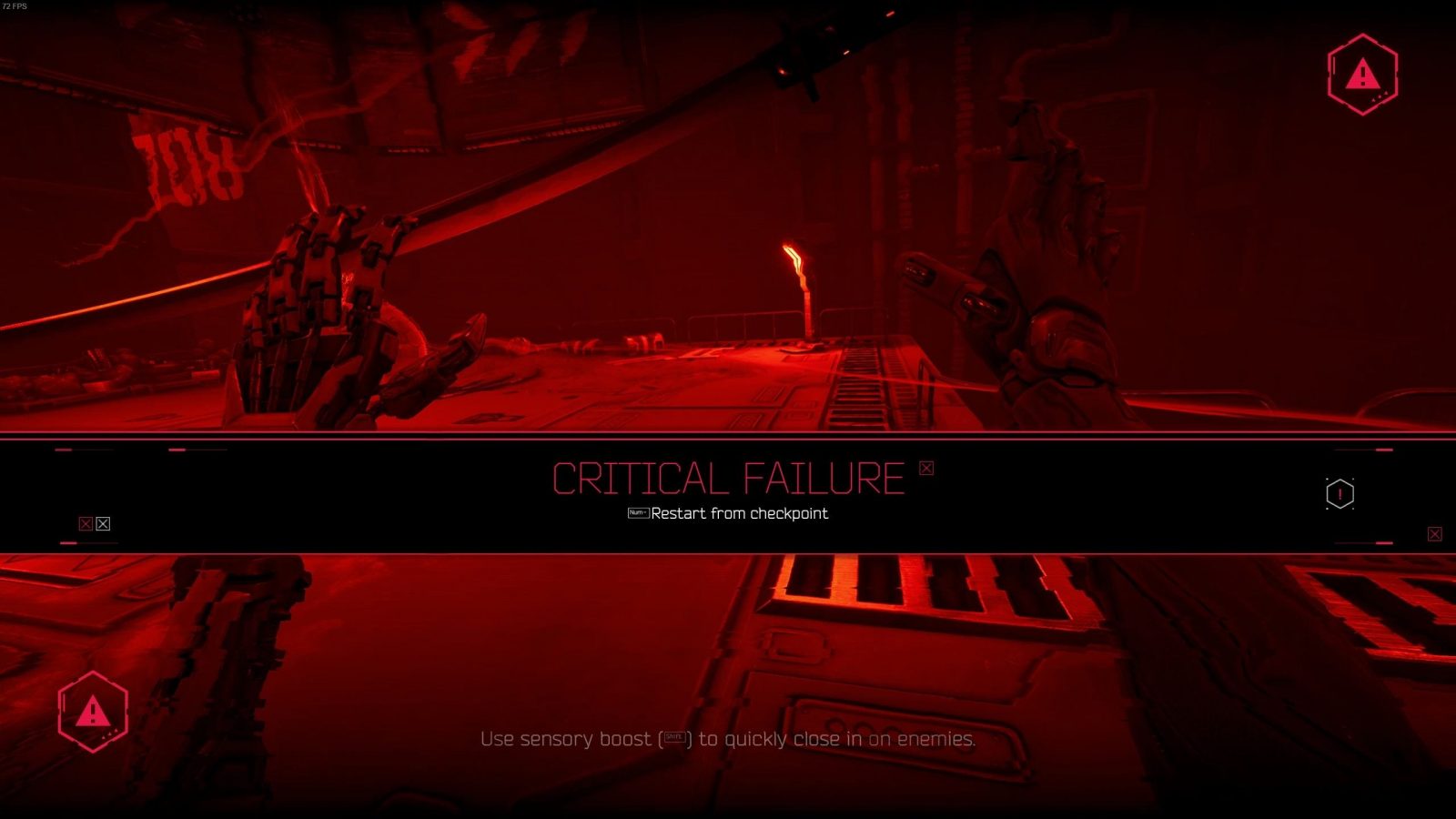 Trust me; you’ll definitely see this screen a lot

Now, while this game is amazing there’s still one major thing that nags at me each time I go into a level to play; the level design. A large number of each level segment is designed well, and players are free to try any strategy they can think of. But, there’s a good number of times that I’ve noticed where levels are designed to have multiple avenues of attack, but only have one real path that actually works. There’s one level in particular that gives you the option of taking a zipline either ahead of you or to the left. Taking it ahead of you will later give you the option to go left or right and both will result in being spotted by a huge number of enemies without being able to land a single blow. The only accurate path is to go left initially, then right, then looping back around on the zipline to hit any enemies you missed. Bear in mind, at this point you don’t have a lot of Energy Abilities either to take on large groups of enemies. And, I know, it definitely doesn’t make sense when describing the level in this sort of detail, but overall it’s clear that there’s a lot of fake paths that simply act to result in you stacking up deaths and playtime.

There’s one huge thing for me that would see me stack up tons of playtime on this game, and that’s Steam Workshop. It took me just under 5 hours to complete this game, and it cost $30; a bit high a price point for that amount of game time. Sure, for some the replayability will come from the sense of competition in wanting to be the top player with the shortest completion time and lowest death count. But, for others, it’ll come from being able to play new maps and being a part of a community of Ghostrunners. It’s the only way I can see Ghostrunner staying relevant, and, most importantly, fun.

Ghostrunner is a breath of fresh air. It takes the best parts of Hotline Miami and Mirror’s Edge, sprinkles in its own style, and hands players a unique experience. Every single minute is a thrill ride that keeps the player packed full of adrenaline, and it doesn’t stop until the end of each level. It’s an immensely enjoyable and satisfying experience that will have you on the edge of your seat trying to master each segment. However, as the price point currently stands you’re getting about 5 hours of content for $30, with the only replayability coming from leaderboard rankings.

With a deep interest in writing, Ben followed that into a Journalism degree. As an avid lover for gaming, he is constantly expanding his library with console, PC, and VR games. He's obsessed with stealth games and loves hunting down the smallest of details inserted by devs.
Related Articles: Ghostrunner
Share
Tweet
Share
Submit