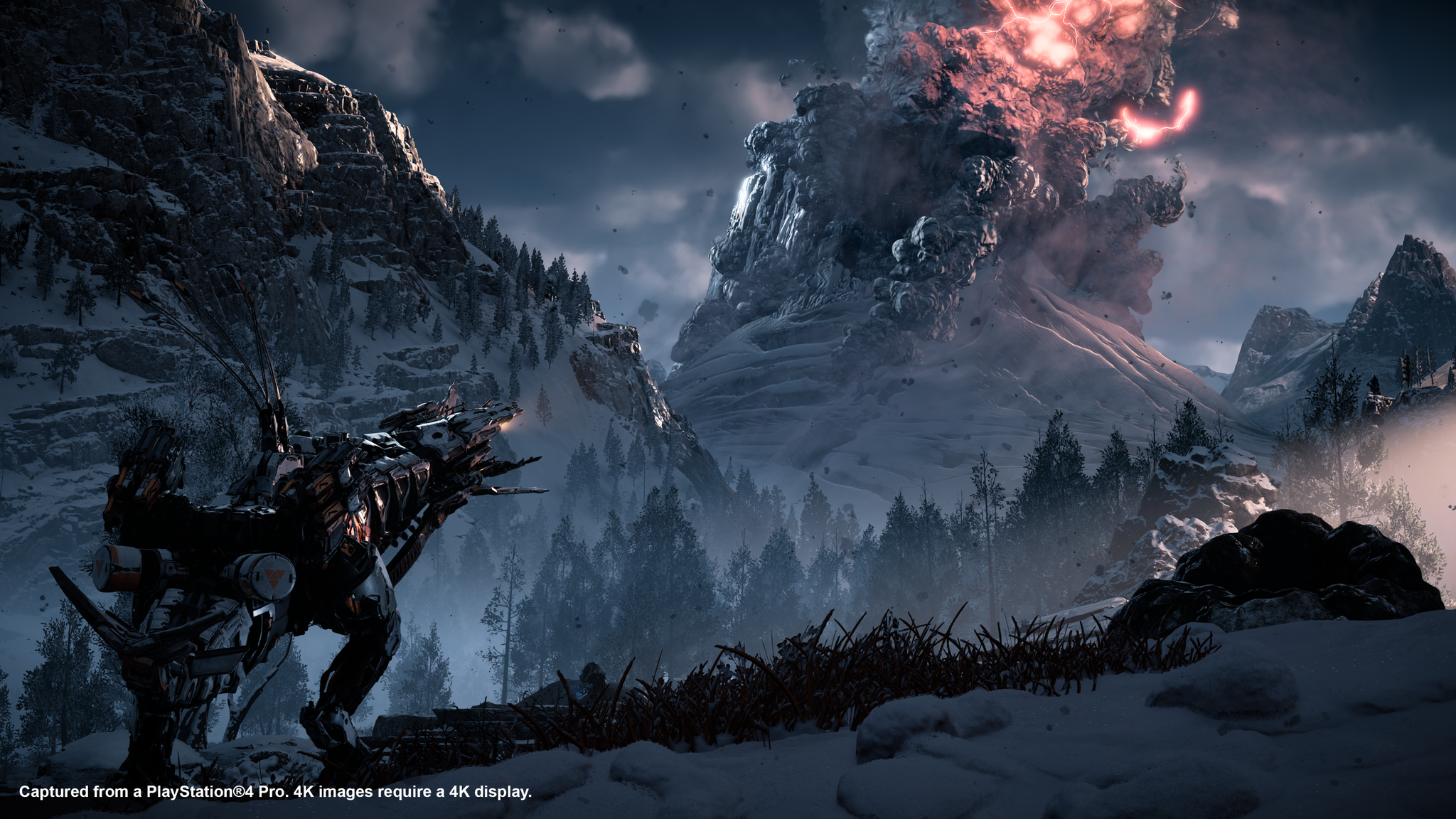 I should start off by saying that the second I booted up the game since reviewing it in February, I immediately realized that I had truly forgotten how goddamn beautiful it is. So beautiful, in fact, that I figure it bears repeating in this review of the expansion. The Frozen Wilds takes players North to a frigid region that adds snowy peaks and unique snow weather effects to the game’s already gorgeous offerings. Horizon Zero Dawn is still one of the best looking games of 2017, and the expansion builds on that impressive foundation.

The Frozen Wilds begins when Aloy hears rumor of some strange goings-on in the Northmost region of her world. Naturally, she braves the icy peaks to investigate. The area is home to the Banuk, a nomadic tribe not featured very prominently in the core game, aside from the existence of those odd little Banuk figurines you collected, and one main character who was a part of their tribe in the past. Now, we get to see this group up close, and even ingratiate ourselves into their ranks as a part of the main questline in the region. Over the course of the DLC’s duration, Aloy learns about a mysterious mechanical presence in the area known only as “The Daemon,” which is said to have the ability to corrupt robots, bending them to its will and making them stronger in the process. Aloy decides to investigate and confront The Daemon. Along the way she meets a few notable members of the Banuk tribe and gets involved in some good ol’ sibling rivalry, which quickly becomes the focus of the expansion’s narrative.

The story ends up being a bit of a mixed bag. Though I enjoyed learning more about the Banuk, and liked that the story focused on living characters (something the core game’s narrative sometimes failed to do), it ultimately has few twists or turns and ends just as quickly as it begins. Without going into spoilers, I’ll say that the story follows very familiar patterns that the campaign from the core game introduced, and ends up essentially parroting that storyline. My playthrough lasted only two and a half hours, which didn’t give much time for the payoff or character development I had hoped for going into it.

That said, The Frozen Wilds offers plenty of other content for players to take advantage of. The new region isn’t enormous, but it’s substantially large enough for you to explore for hours without running out of things to do. You’ll earn new and powerful equipment, unlock new skills, find new side quests, and hunt new machines — the latter of which I’d imagine appeals most to many players. There are only a few new machines in the expansion, but they’re some of the more vicious ones in the entire bestiary. For example, The Scorcher is a wolf-like robot that sprays fire everywhere and punishes players for getting anywhere near its path of destruction. And these new enemies are challenging as all hell, especially when they combine with another new enemy type that can heal machines near it. Sometimes these new enemies and encounters can be a ton of fun, especially when a new enemy surprises you with an ability you didn’t see coming. In other cases though, some of the difficult seems a tad unfair. One specific encounter near the end of the primary questline puts you up against an enemy that relentlessly swipes at you almost without pausing in an encounter that you can’t utilize stealth in. Horizon Zero Dawn works best when encounters cater to a variety of play styles, so this encounter left me scratching my head a bit.

The Frozen Wilds is also prone to minutes-long loading times and occasional glitches, much in the same way that the core game is. Character models will pop in and out of the world, you’ll get caught on the world, Aloy will jump erratically, resulting in your death, and much more. However, these instances are still somewhat rare and are mostly on par with the inelegant charm of most open-world games.

Horizon Zero Dawn: The Frozen Wilds is a short, but substantial expansion for an already great game. It doesn’t reinvent the game in any major way, but offers a few excellent hours in a world that players have come to love.

You know that jerk online that relentlessly trash talks you after every kill? That guy was probably Travis "Tie Guy" Northup. Competitive, snarky, and constantly wearing a tie, Travis has been writing his opinions about electronic media since he was a teenager, and is pretty much the only person to hold his opinions in high regard.
Related Articles: Horizon Zero Dawn: The Frozen Wilds
Share
Tweet
Share
Submit