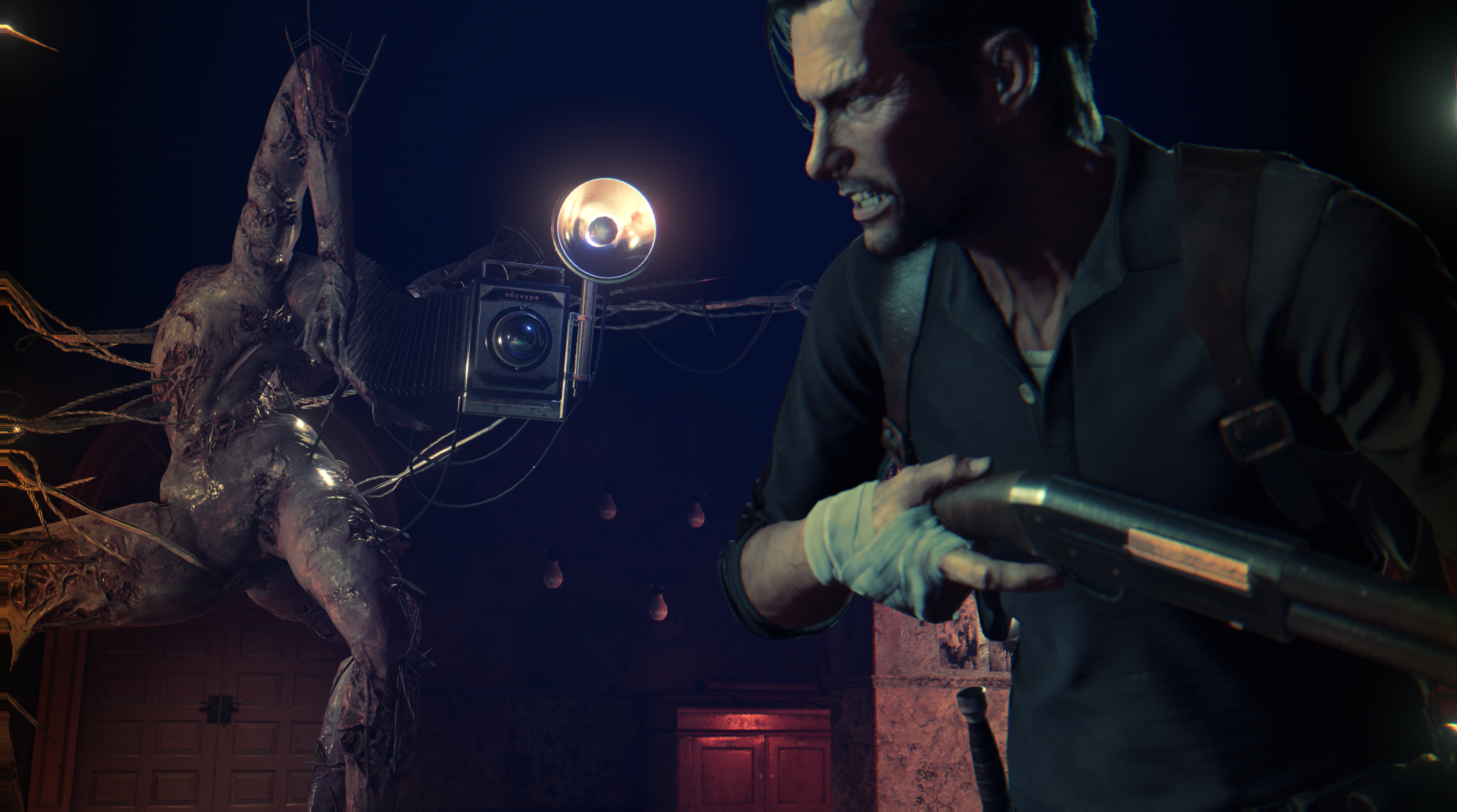 A solid shriek-quel: The Evil Within 2 review

The Evil Within 2 is the kind of horror game that even those who aren’t into horror games should give a try.

As someone who gets stressed the hell out by horror games, it takes a lot for one to draw me in. I tend to lose my mind if I don’t have enough ammo to defeat an enemy, I’m most comfortable with games that give me a radar, and I’m grossed out by handshakes, so seeing amputated body parts isn’t my favorite thing in the world. That’s why I was so surprised to find myself eager to continue my playthrough of The Evil Within 2. Though it contains all of the above things that make me uncomfortable, a solid premise, exciting gameplay experience, and compelling progression system had me hooked before I had a chance to stress out and unplug my console.

The Evil Within 2 once again focuses on the alcoholic, brooding former police detective Sebastian Castellanos, who must survive various horrors in order to be reunited with a daughter he has long thought to be dead. Most of the game takes place inside the game’s version of “The Matrix,” a machine called STEM that allows persons to be uploaded to a virtual world together. Early on in the 20-hour story, Sebastian discovers that his daughter was kidnapped by a powerful shadow organization, and is currently trapped inside STEM. In order to rescue her, Sebastian must risk it all once again by uploading his consciousness to STEM’s simulation of Everytown, USA called “Union,” and confront the terrors that await him.

The plot is chock-full of cliches, and the protagonist is equal parts unlikable and boring; these are by far the issues that most hold back The Evil Within 2. Sebastian growls about his daughter and bemoans how he wasn’t able to save her at least a dozen times throughout the game, oftentimes in the form of lengthy, irritating cutscenes. In an attempt to make Sebastian a compelling character, two or three character traits are practically shouted at us again, and again, and again in a way that ends up making the protagonist seem one-dimensional. Most other characters are even more paper-thin, as they almost always have only one trait that we are reminded of every single time that we see them. For example, the team psychologist, Yukiko Hoffman, is limited almost exclusively to saying things that explicitly reference the fact that she is the team psychologist, a fact that becomes a joke between the characters themselves by the end of the game. The fact that some of the voice acting itself isn’t very good certainly doesn’t help.

It’s a real shame, because the premise for The Evil Within 2 is actually pretty brilliant. The plot device of being trapped inside a virtual world lends itself quite well to a horror game, and allows for a limitless amount of weirdness without having to become too detached from reality in doing so. The idea that one’s fears can physically manifest themselves into horrors that one must confront is intimate and terrifying. Unfortunately, Tango Gameworks falters when it comes to execution of this story due to poor dialogue and paper-thin characters.

Aside from the issues with character and dialogue, though, The Evil Within 2 actually offers a campaign that is challenging, well-paced, and full of interesting surprises. While the first act is all about hunting down a deranged psychopath, the second and third acts turn to a story that’s much more personal, and the stakes are steadily raised to a fever pitch by the end. The story’s conclusion, in particular, ranks highly among my favorite campaign endings in recent memory, as dual conflicts converge both inside and outside of STEM in an extremely tense series of events.

Like its predecessor, The Evil Within 2 is a survival horror game, with a focus on limited resources and stealth-based gameplay. Collecting crafting materials, stealth-killing enemies, and running away from things you just can’t kill are a few of the major ways that you’ll find yourself spending your time. But unlike the first game, The Evil Within 2 now features open-world areas with side quests and lots of optional encounters. In one instance, my attempts to scavenge a diner for supplies turned into a completely optional encounter where I found myself evading a gross creature with a propensity for singing lullabies. The idea that random areas could suddenly turn into unique, self-contained encounters was something that excited and tormented me throughout the game’s duration.

I found the open-world element nature of The Evil Within 2 to be by far the biggest pleasant surprise that the game had to offer. Roaming around to scavenge supplies, complete side quests, and find hidden areas, encounters, and items is a tense, rewarding experience. Although none of these open-world areas are particularly large, all of them are packed with stuff to discover, and change over time, as the events of the story impact the world. Tango Gameworks has absolutely nailed creating a living, breathing world that maintains a creepy tone and ambiance throughout the game, and it’s easy to become absorbed by the weirdness of the simulated plane of existence that is Union.

I was also pleasantly surprised to find that, upon completing The Evil Within 2, the player is rewarded with a lot of unlockables that extend the game’s lifespan. Some are small items like a more powerful pistol, and some new outfits, but others are much more impactful, like the New Game+ mode, and additional difficulties. They also throw in a “cinematic mode,” which mimics the widescreen aesthetic that the original The Evil Within was criticised for at-length (nice touch, Tango). In a single-player experience that already offers plenty to do, this endgame care package is the best kind of icing on the cake that put a huge smile on my face. I wouldn’t be surprised to find myself going back to playthrough again once the gaming industry’s busiest season has passed.

The Evil Within 2’s presentation is a bit of a mixed bag. While the game doesn’t look bad by any means, it is occasionally prone to framerate stuttering, and textures popping in and out. That said, nothing was ever bad enough to pull me out of the experience. The audio design, on the other hand, has larger pitfalls. As I mentioned earlier, I’m not a fan of some of the performances that can be found in The Evil Within 2. The protagonist in particular sounds bored most of the time, and just refuses to shut the hell up at any point during the game. When he speaks, it’s usually an obligatory “What the hell?” that reminds you that Sebastian is a tool rather than a dynamic personality. It’s especially a bummer since some of the other performances are quite good. Juli Kidman and Esmerelda Torres, for example, are interesting characters that I wouldn’t have minded to hear more of. Instead, I got to hear Sebastian complain about his dead daughter for the 90th time. Aside from the voice acting, though, the sound design is quite good. The music is dark and creepy when you’re exploring, then springs to life when you find yourself being chased by enemies, then reaches a climax as you turn on your heels and take down your attacker with a well-placed headshot. The sound effects are crisp and fit the mood perfectly (even though the groans of some of the enemies can become irritating over time).

A solid shriek-quel: The Evil Within 2 review

The Evil Within 2 is a huge step forward for the series that emphasizes exploration, stealth, and conserving resources for the more challenging encounters. Though the compelling plot is weighed down by poor writing and poorer voice performances, the game offers a great horror experience with a ton of content.

You know that jerk online that relentlessly trash talks you after every kill? That guy was probably Travis "Tie Guy" Northup. Competitive, snarky, and constantly wearing a tie, Travis has been writing his opinions about electronic media since he was a teenager, and is pretty much the only person to hold his opinions in high regard.
Related Articles: The Evil Within 2
Share
Tweet
Share
Submit