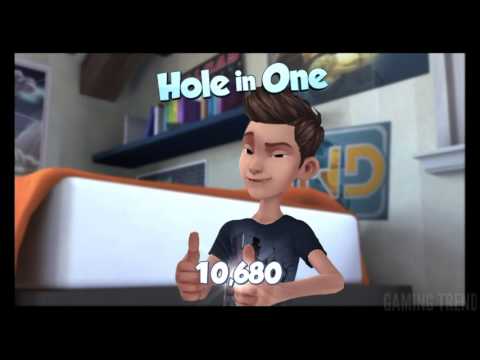 Minigolf, like pinball, is a drastically underserved genre. Thankfully we have Zen Studios to give us great games for both! After a successful Early Access run on Steam, Infinite Minigolf is finally heading to virtual shelves. It’s time to see if Infinite Minigolf manages to drain that hole in one, or if it ends up a bogie.

First off: Infinite Minigolf is not just a clever moniker — there really is a nearly infinite amount of minigolf to be had. Infinite Minigolf supports user generated content, but that’s only half the story. While some companies continue to spin the yarn that it’s “impossible”, the team at Zen Studios has managed to get cross compatibility working for all of that sweet user-curated goodness, meaning anything you create can be played by players on the PlayStation 4, Xbox One, Nintendo Switch, and PC. Better still, content automatically works on PSVR, the HTC Vive, and Oculus Rift, if you have those accessories.

Wrapping some numbers around that “infinite” part, out of the box there are 706 holes in the box to play in online, local, or solo play, split across three tournament fields. The first, Giant Home, is exactly as it sounds – taking place in an oversized kids room, complete with RC cars zipping around. Santa’s Factory takes place in and around, as you might have guessed, Santa’s toy factory. Nightmare Mansion is, by a very wide margin, my personal favorite with its wonderfully rich Halloween color pallet and characters. Each have grin-inducing fun animations all around, though, not trying to be too much of a Grinch, but, Santa’s Factory comes in a distant third. All three areas are further sub-divided into four 9-hole rounds, each with a new area to explore. They are also divided into three difficulty levels, throwing crazy challenges like a hole that repels the ball, obstacles, and other goodies to make hitting that hole-in-one a lot harder than it is on “casual”. It never feels unfair, which is a wonderful thing.

To help you overcome the level challenges, the game supplies a number of power-ups. A rocket power-up makes the ball launch vertically for a short period of time, allowing you to bypass entire swaths of the course at the risk of falling out of bounds. A magnet makes the ball attracted to the hole (“That is your home! Are you too good for your home?!”), and a joystick gives you control over the ball’s trajectory for a short period of time. Combining them can be the key to higher scores as you can chain one that makes your ball fly horizontally for a brief moment, followed by one that lets it stop on a dime. These power-ups, combined with the three difficulty levels, make the game accessible for the purist, while enjoyable for those who delight in a minigolf game that is a little more zany than usual. There’s even a leaderboard for those that take putt-putt far too seriously.

While we are talking about VR, let’s talk about what is and isn’t present in Infinite Minigolf. Hitting the virtual links on PlayStation VR, I was surprised at just how clear the game looked on the platform. With a rock solid framerate, Infinite Minigolf doesn’t fall into the trap that many VR-compatible games do, sticking with stylized, but highly detailed player models and environments. I was, however, sad to find out that the game doesn’t support PlayStation Move controllers. This means, you’ll be sitting stationary and using thumbsticks instead of getting on your feet and getting your hip sway on. This seems like a pretty easy miss that, if added, would be a cool addition for all three VR platforms. That said, because you remain seated the entire time, there are no nausea issues.

Infinite Minigolf supports up to eight players, both locally and online. The cross-compatibility for uploaded courses doesn’t seem to extend to cross-platform play. This isn’t a big deal as, even in pre-release, there are already quite a few people online – a good sign for any multiplayer component.

While the three main areas are unlocked from the start, playing a quick nine holes will unlock the subsequent sub-areas. What is locked, however, are the customization options. Your character, male or female, will start with just a few shirts, pants, shoes, watches, sunglasses, and other various accoutrement to customize. Playing courses and tackling the challenges presented will earn you coins. Coins can be traded for foil packs that will unlock goodies outright, or give you enough cards to trade for them. Some are coupled with a level component, requiring a little more work to unlock the crazier outfits. Take a look at the video below for a brief overview.

While there is an amazing amount of content already in Infinite Minigolf, the included Editor is far more powerful and easy to use than I could have imagined. Snapping together a quick level with zero instructions, I managed to make a nigh-impossible level right out of the gate. Adding some additional power-ups could take this from daunting to trivial, but either way, it was fun to make. While I’m certain a great many levels will be made by those far more talented than I, the ease of building and smoothing over a course means far more amateur creators will try their hands at it.

While the VR component ends up a little “pin high”, the overall package is well worth it. The powerful editor and community component extend the game’s longevity dramatically, and are a welcome feature amidst a solid title. Whether you are a kid, or just a kid at heart, Infinite Minigolf’s charm is sure to lure you in.

Ron Burke is the Editor in Chief for Gaming Trend. Currently living in Fort Worth, Texas, Ron is an old-school gamer who enjoys CRPGs, action/adventure, platformers, music games, and has recently gotten into tabletop gaming. Ron is also a fourth degree black belt, with a Master's rank in Matsumura Seito Shōrin-ryū, Moo Duk Kwan Tang Soo Do, Universal Tang Soo Do Alliance, and International Tang Soo Do Federation. He also holds ranks in several other styles in his search to be a well-rounded fighter. Ron has been married to Gaming Trend Editor, Laura Burke, for 21 years. They have three dogs - Pazuzu (Irish Terrier), Atë, and Calliope (both Australian Kelpie/Pit Bull mixes).
Related Articles: Infinite Minigolf, Let's Play, VR
Share
Tweet
Share
Submit