Afterparty is a game I really want to like. It follows two recently deceased college graduates, Lola and Milo, as they attempt to out party Satan, get out of Hell, and maybe find out why they’re there in the first place. It’s a great setup! And, coming from the developers of Oxenfree, Night School Studios, you’d think this would be another homerun for them. While Oxenfree was a supernatural horror story about a time loop, Afterparty goes in the opposite direction and has a much greater emphasis on humor. It is a pretty funny game too, most of the jokes got at least a chuckle out of me, but everything else falls short.

To start off, Afterparty has a great aesthetic. The game takes place on several islands in Hell connected by the lava filled River Styx, and you’ll travel between them by calling a demonic cab driver. The whole game is basically an answer to the question “what if Hell was just one, big, sleazy city?” It’s a great idea, and it feels almost realized, but that one word is where Afterparty’s biggest problems begin to stem from: almost. The aesthetic almost comes through, but the choppy framerate, blurry textures and character models hold it back. The central mechanic of different alcoholic drinks giving you new dialogue options is almost great, but those dialogue options never actually matter. I could go on, but everything about Afterparty makes it almost good. It’s a tragically unfinished game, and on a second playthrough it’s very easy to see where the developers wanted to go, but couldn’t for whatever reason. 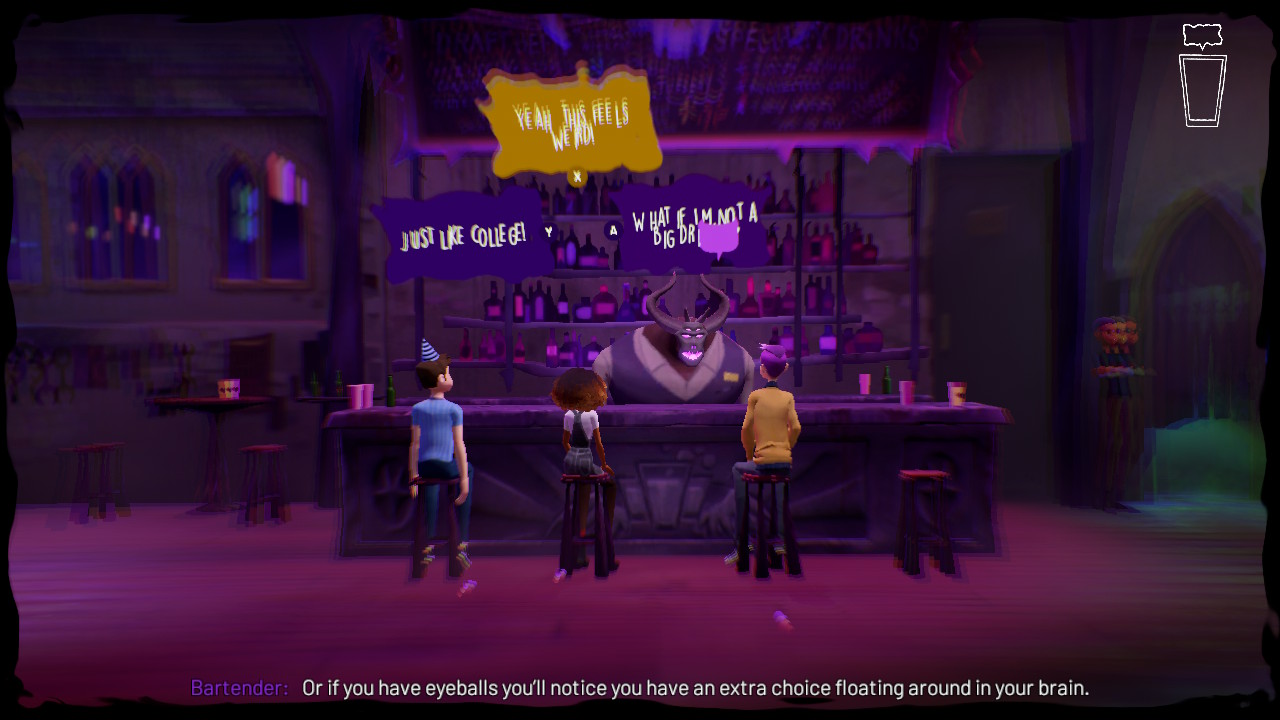 There’s only three instances of real choice in the game, involving whether you follow Milo’s plan or Lola’s, and only one of those will offer a scenario that you can’t experience if you choose the other. Having played the game twice now, it’s very disappointing how the game’s illusion of choice falls apart so easily. For example, near the end of the game Milo and Lola have an argument (which feels very artificial) and, depending on who you sided with the majority of the time, one of them will storm out of Satan’s house just before the drinking contest. You’d think that you would have the option of making up with them or not, but no you have to go get them back. While other games’ illusion of choice breaks down on repeat playthroughs, it’s easy to see behind the curtain here even on your first playthrough. Honestly, I would have prefered a more linear narrative if it would have helped the game in other aspects.

Surprisingly, performance on Switch is about on par with its counterparts. By that I mean it runs poorly. The frame rate will never reach any sort of stability, and everything looks very messy all around. One thing that did stand out about this version, however, was that I felt with less effects on screen the art style was able to stand out a bit more. Portable mode offers an essentially identical experience as far as I could tell, though the text is impossible to read and the game will drain your battery super quickly. 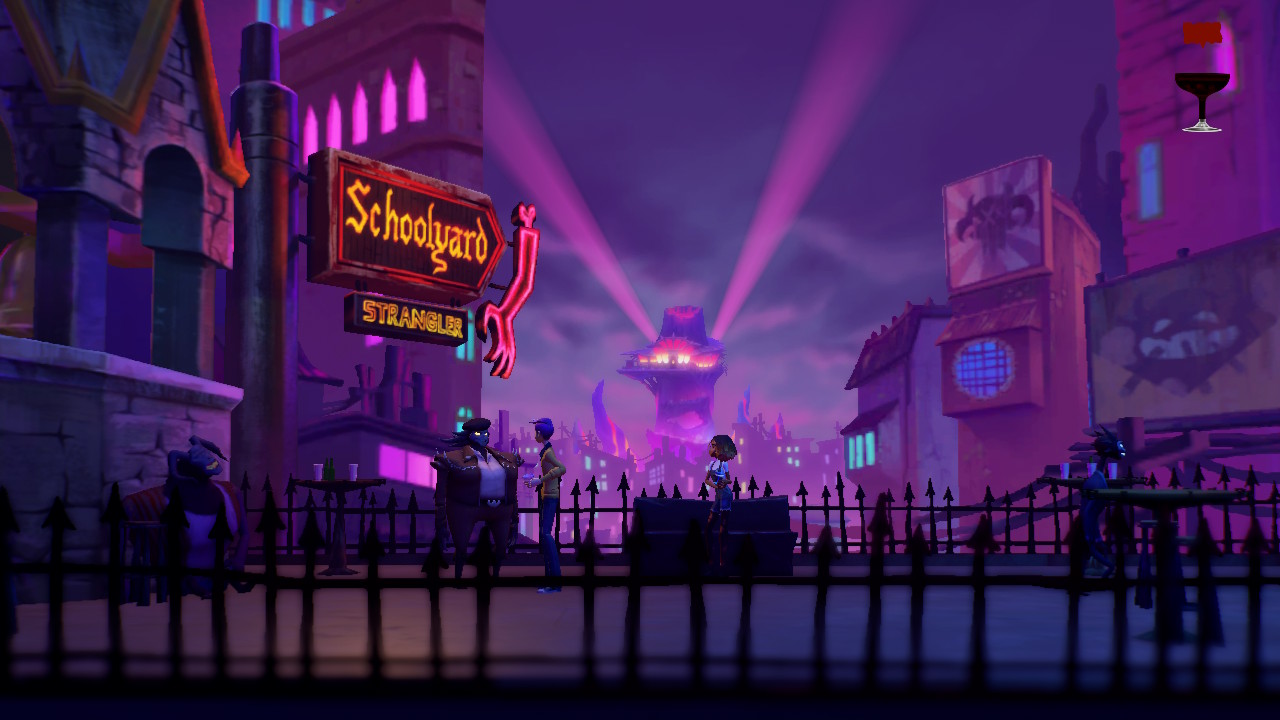 The best part of Afterparty is the voice acting. With standouts like Ashley Burch as Sam the cab driver and Dave Fennoy as Satan, the acting is excellent and sounds natural across the board. These performances do a lot to carry the game through at least one run, despite its numerous failings. The direction the plot ends up going is fairly interesting as well, if only for its effort to say something meaningful.

Afterparty unfortunately doesn’t come close to the standard its predecessor set. While it has great ideas and actors, the rest of the game collapses under the weight of its own ambitions.

David is the kind of person to wear his heart on his sleeve. He can find positives in anything, like this is a person who loved Star Fox Zero to death. You’ll see him playing all kinds of games: AAAs, Indies, game jam games, games of all genres, and writing about them! Here. On this website. When not writing or playing games, you can find David making music, games, or enjoying a good book. David’s favorite games include NieR: Automata, Mother 3, and Gravity Rush.
Related Articles: Afterparty, Indies
Share
Tweet
Share
Submit