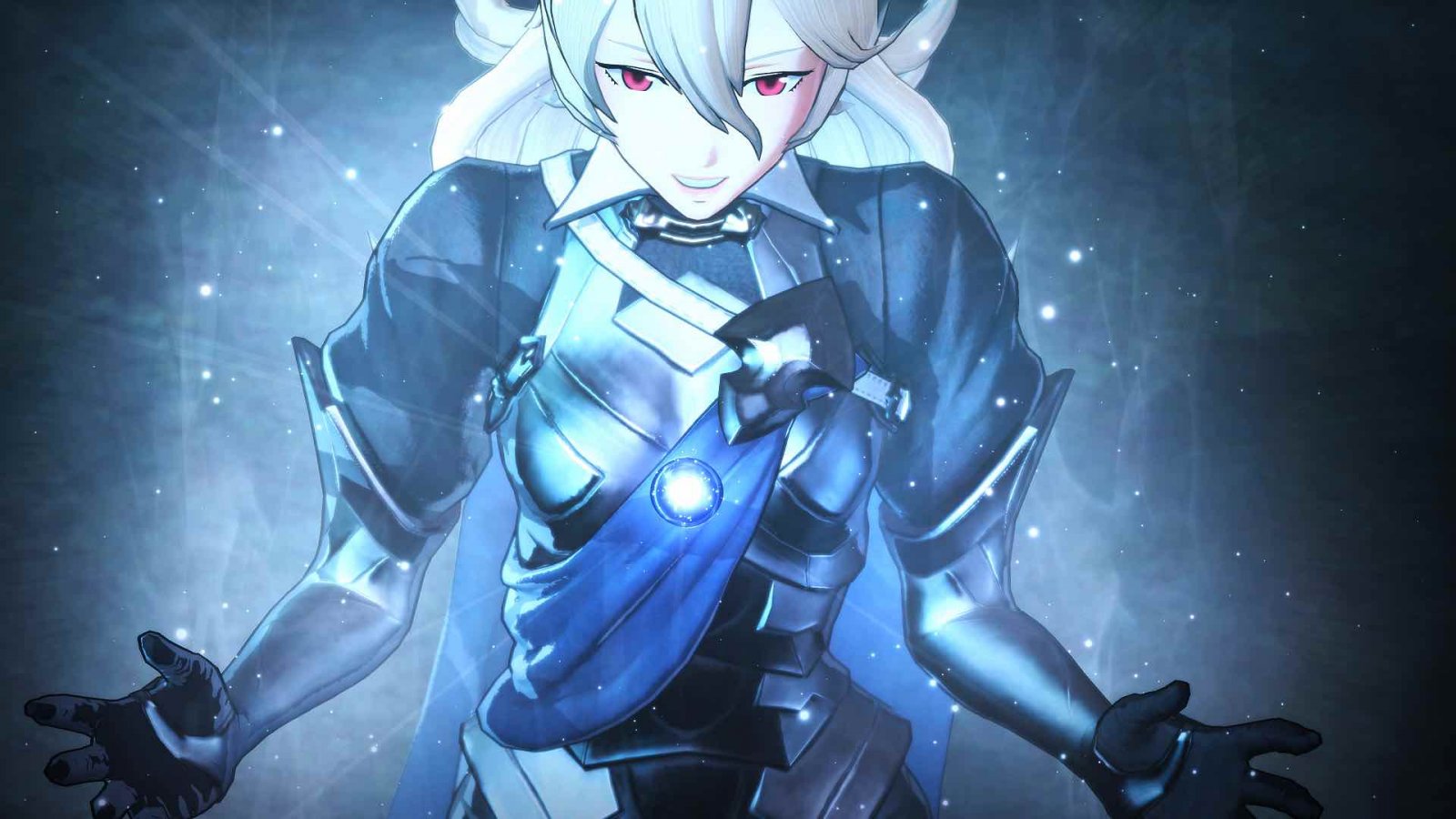 When Fire Emblem Warriors was first announced, I was elated. I imagined kicking ass as characters like Lyn, Hector, Tibarn, and the Black Knight. Maybe Tibarn was a little unlikely, given that he’s an NPC for most of the two games he’s in, but I felt sure that FE Warriors would include at least one or two characters from each game in the series. Much to my dismay, that turned out to be incorrect; of the above characters, only Lyn actually made the cut. This disappointment almost caused me to miss out on a great game.

Because of the roster, I had low expectations for this game and was hesitant to even pick it up, but now I’m glad I did. Fire Emblem Warriors is a large-scale hack-and-slash game in which you run across a huge battlefield taking out enemy troops by the dozen. You can capture forts and outposts by defeating stronger-than-normal enemies called Captains. You can also use the pause menu to issue orders to other characters in your army. Often, there will be a variety of objectives that come up during battles—to protect a specific NPC, capture a specific landmark, or defeat a specific enemy. As you fight, you will gradually charge up two gauges, your Warrior Gauge and your Awakening Gauge. The Warrior Gauge allows you to execute a Warrior Special, an automatic combo with an especially powerful finishing attack; the Awakening Gauge provides you with enhanced offensive capabilities and cancels any weapon triangle disadvantage for a limited time. When your Awakening state ends, your character will auto-initiate a strong finishing move much like the Warrior Special. Finally, some moves will trigger the Stun Gauge on stronger-than-normal enemies; once the Stun Gauge is present, if you continue to attack the same target, you will fill it up and launch a critical hit, similar to the last hit of a Warrior Special. Finally, you can manufacture special crests between battles to power up your characters in various ways. These are all common threads throughout Dynasty Warriors and its spin-offs, things that anyone even remotely familiar with the series would expect.

Tiki’s unique Awakening mode transforms her into a dragon.

What came as a pleasant surprise to me were the new gameplay twists inspired by Fire Emblem. First of all, the weapon triangle, introduced in FE4: Genealogy of the Holy War, is included in the game. Swords beat axes, axes beat lances, and lances beat swords. What this means in terms of Warriors gameplay is that an advantaged weapon type triggers the Stun Gauge with any attack and fills it up quickly, while a disadvantaged weapon type can never trigger the Stun Gauge. Also, certain weapons are especially effective against certain types of enemies; bows deal much more damage to flying characters, the legendary Falchion is especially effective against dragons (including the half-dragon Corrin) and wyverns, armor-slaying weapons are strong against heavily armored knights, etc. These qualities can be added to a weapon via forging, provided that you have another weapon with the trait you want to add. In addition to weapons, some characters can also use healing staves to restore an ally’s HP.

Characters also level up in this game, improving their basic fighting abilities. When a character reaches Level 15, you can promote them to an advanced class, drastically bumping up their stats and enabling them to receive more powerful crest enhancements. However, a character’s Level doesn’t reset back to 1 upon promotion, so there’s no reason to level up further before promoting like there would be in most main series games. Like in many Fire Emblem titles, you can sometimes find treasure chests on the battlefield that contain special weapons or other items, such as the Master Seals you need in order to promote characters. In order to open these chests, you need to obtain keys by defeating certain enemies. You may also need to rush out and defeat a Thief or two before they steal your treasure for themselves.

Finally, Warriors also includes the pair-up system introduced in FE Awakening. You can switch which one of the pair you control at will. Once in a while, a paired ally can block an enemy attack or make an attack of their own that automatically starts the Stun Gauge. In addition, if both characters in a pair have their Warrior Gauges full, they can perform a Dual Warrior Special together, cooperating to deal even more damage.

The game features a Story Mode and History Mode. The Story Mode focuses on the game’s original characters, Rowan and Lianna, as their kingdom is beset by monsters and attacked by the neighboring country. The plot is nothing special; it’s essentially a series of excuses to pit the player against nearly every playable character before they join your army. After completing the story, I remain indifferent toward Lianna and find Rowan somewhat irritating. Still, the Story Mode does what it needs to: it effectively introduces characters and gameplay concepts to a new player. The voice acting is pretty good overall; it’s not as good as in Fire Emblem Echoes: Shadows of Valentia, but not as bad as in Fire Emblem: Path of Radiance and Radiant Dawn.

History Mode is initially unavailable; the first three sections are unlocked by completing certain parts of Story Mode, while the last two require you to finish Story Mode. The first three focus on Awakening, Fates, and Shadow Dragon, respectively; the last two are themed after Blazing Blade and Gaiden, centered around Lyn and Celica, respectively. Completing the latter History Mode sections is no easy task; in order to have a significant chance of success, you must have a variety of high-level promoted characters and a solid strategy. And you must complete these History Mode sections to unlock two of the last three playable characters: Lyn and Celica. Anna is unlocked by obtaining a certain amount of the game’s collectibles, which become available based on certain objectives in certain battles.

Over a third of all playable characters are originally from Fire Emblem Fates, and more than quarter of the cast hails from Awakening. I’ve got nothing against either of these games or their fans, but no two main series games out of the 15 that have been made since 1990 should have accounted nearly two-thirds of the roster by themselves, especially while leaving three entire settings totally unrepresented (Jugdral from FE4-5, Magvel from FE8, and Tellius from FE9-10). The developers’ stated reason for this was not wanting to over-saturate the roster with sword fighters, and yet both of the game’s original characters, Rowan and Lianna, use swords; furthermore, that doesn’t explain the absence of main characters like Hector, Ephraim, and Micaiah, who don’t use swords.

One thing that can make the game a little easier is co-op mode. By using the Joy Cons or a Pro Controller (or, with the new system update, a GameCube controller), you can have a second player help you fight. Having the cooperation of a second player makes a huge difference in terms of the strategies you can execute. However, co-op mode is not without its issues. In single player, frame drops are few and far between, but in co-op, they occur more frequently, especially during Warrior Specials. Sometimes, the system also has trouble loading enough enemies for both players to fight if they’re on different parts of the battlefield. It’s still very playable, though. After many continuous hours of co-op mode, the game never crashed, nor did any other glitches occur. Despite some performance issues, it’s still very fun for two people.

The Amiibo support is small but helpful. Scanning any Amiibo will grant you a new weapon. The new Chrom and Tiki figures grant unique weapons the first time they’re scanned, and scanning the amiibo of any other character who’s present in the game will allow you to hear their voice and obtain a weapon of the type that character uses (tomes for Robin, dragonstones for Tiki, swords for others), while other characters will give random weapons.

I hate to end on a sour note, but I must mention this game’s DLC. It will not fix this game’s roster issues, instead simply adding more characters from Awakening, Fates, and Shadow Dragon, which are already well represented. More distressing, however is the despicable practice of pulling finished content from the game to be sold for more money after the customer has purchased the main game. First of all, four characters (Owain, Niles, Oboro, and Navarre) are present in the game but not playable until the customer buys the appropriate DLC pack. In addition, it stands to reason that a character as popular and important to the Fates story as Azura—one who doesn’t use a sword, might I add—was probably held back to make sure the Fates DLC pack would sell well.

Fire Emblem Warriors is a very fun game marred by a only few issues, some of which were probably unavoidable. The basic hack-and-slash gameplay is as solid and polished as any Warriors game, and the new innovations based on the Fire Emblem series add a lot. The game honestly feels like Fire Emblem almost as much as it feels like a Warriors game. If you’re a classic Fire Emblem fan like me, don’t let the roster keep you from buying the game. If you like Dynasty Warriors but don’t know Fire Emblem, there’s still plenty to enjoy here.

Kyle is an unashamed longtime Nintendo fanboy. Some of his earliest and fondest memories are of playing Super Mario Bros. 3 on the NES with his grandmother. His favorite series are Fire Emblem and Metroid. Outside of gaming, Kyle is also a serious Whovian, favoring the Seventh Doctor and Ace as his preferred Doctor and companion. He also loves superhero movies, power metal music, and basically anything in the space fantasy genre. Avatar by Smashley (@SmashleyDraws on Twitter).
Related Articles: Fire Emblem Warriors
Share
Tweet
Share
Submit