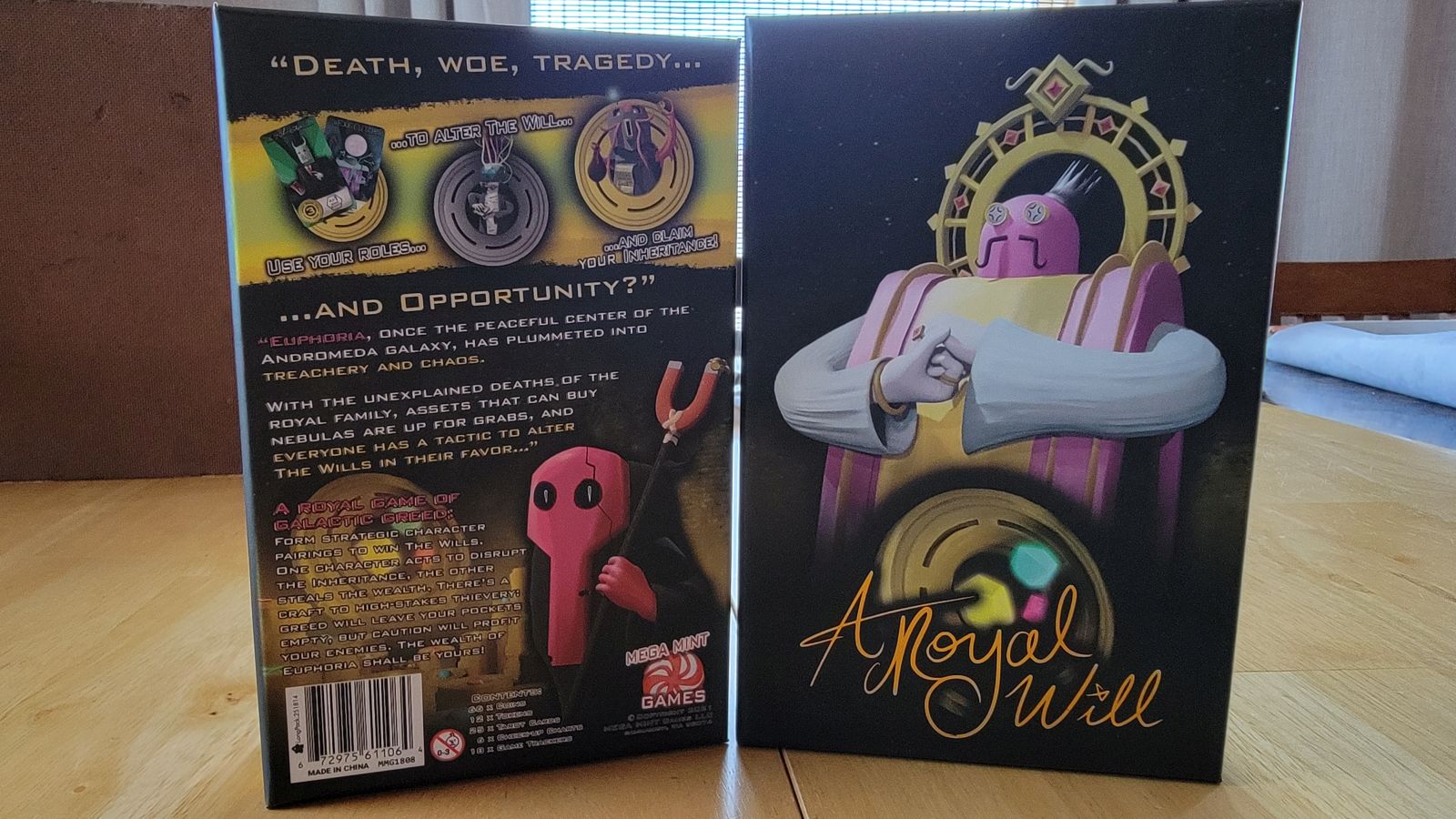 Throughout my life and experience with different types of aliens in all of sci-fi, I have found that when I think of alien high society I cannot help but picture how the show South Park presented alien high society/overlords using other planets as a reality tv type show. That changed when I found out about the game A Royal Will. Now there are two things that serve as a reminder of alien high society in my life, and both are enjoyable. 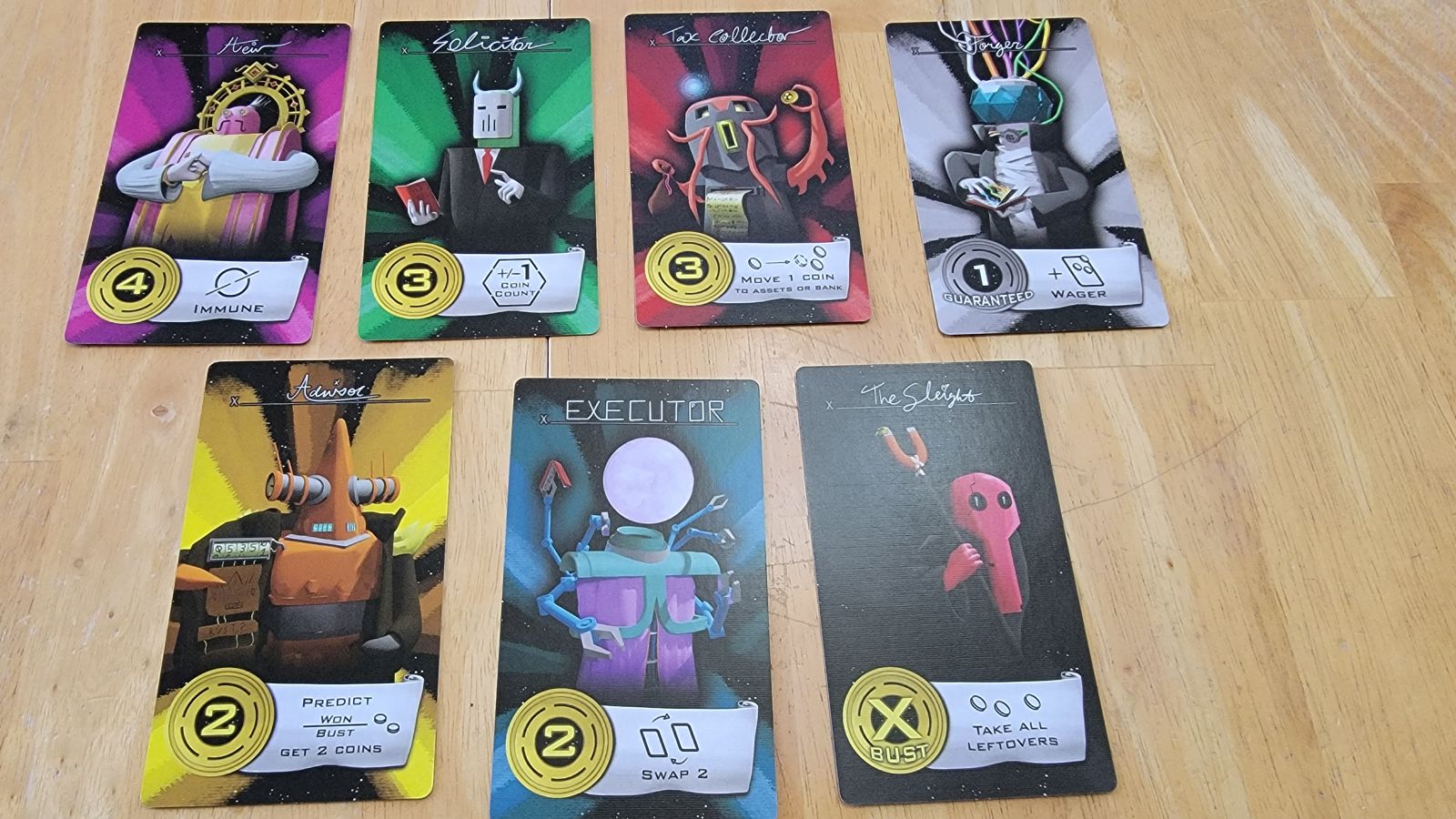 A Royal Will, designed and illustrated by Marlon Fussell, and published by Mega Mint Games, is a simple, yet fun and inviting game that boasts an impressive 15 minute playtime. Amazingly, A Royal Will’s playtime sticks to the 15 minute mark and does not often run over. Pieces and rules are more or less straightforward and while not the most premium of tokens and markers are solid and thicker than normal cardboard pieces that have a hefty but good feel to them. The aforementioned alien high society are the aliens depicted on all of the cards which players will use throughout the game.

A game of A Royal Will involves everyone playing simultaneously. To start, players receive two cards, take the won/bust token, and receive an amount of coins. Each player then gets to choose which of the two cards they will play face up for the cards ability and which card will be placed face down to try and gain money from the community collection of money located in the middle of all players. Various abilities allow players to gain more or less money, to affect how much money is in the collection or let players bet on whether or not the collection and players collectively bust. How do you bust you might ask? Well, within a round there is only a certain amount of money in the collection. Players then get to choose the amount of money they think they’ll be able to gain by playing a card face down. This face down card has a number on it that signifies the amount of money the player desires to gain. After all players have chosen a face up and face down cards they then reveal what cards are face down. If the total between players exceeds the amount of money in the collection, then no players gain money and the player who asked for the most has to pay into the collection. 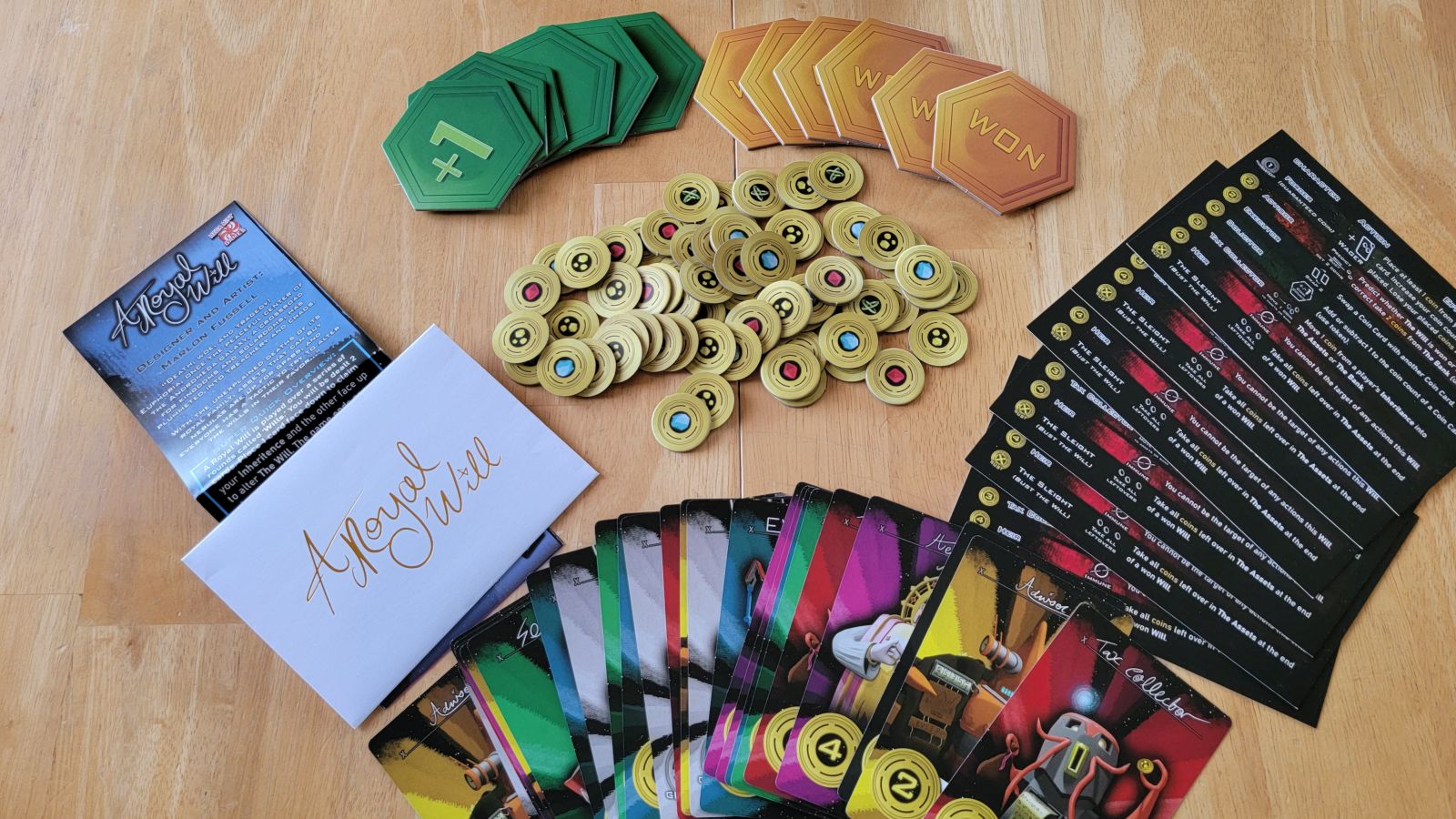 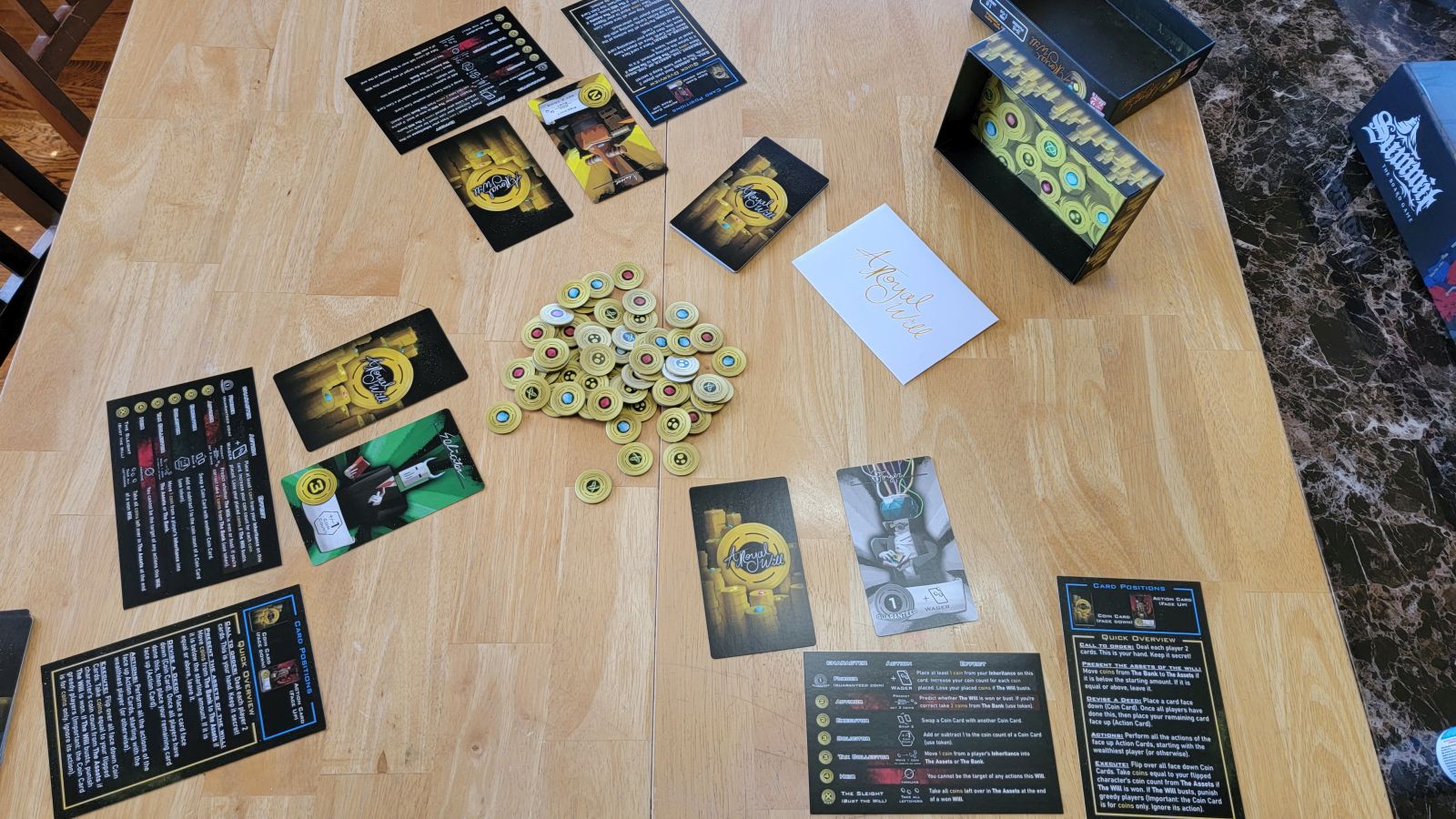 A Royal Will, while not being a big game, has a fun and interactive presence. This interaction is, in my opinion, one of the main driving forces of the game and has me wanting to play more, whether or not I win, it makes spending time with others and playing a game really simple and easy. While this is the case, the game is not without its flaws. All the money is the same in the game as far as value, however there are many different icons and images throughout all the different money tokens that would make players initially think they are all different for a reason mattering to gameplay. Also, there are some slight rules confusion that could use some updating/changing to clarify situations or anything that could come up that it does not address. In some situations I found that there was not a cut and dry answer to a couple of questions and caused some of my playthroughs to be put on hold to not really have an answer except what we decided/thought would make the most sense.

All in all, A Royal Will is a great filler game. Often while needing a game to fill a small time the dilemma is how long it will take and whether it is worth it to play a small game. Typically this occurs while waiting for final players to show up for a main game and the last thing anyone wants to do is start a longer game if it is only going to be a short time for players to arrive. This is where A Royal Will hits its stride and has a lasting place. In sticking to its shorter play times and being a simple game to understand and play, A Royal Will is a standout of filler games and that makes getting it to the table a bit easier than most of its counterparts in the industry. Ultimately A Royal Will tests a players will and rewards those that do play with a quick, easy, and fun experience.