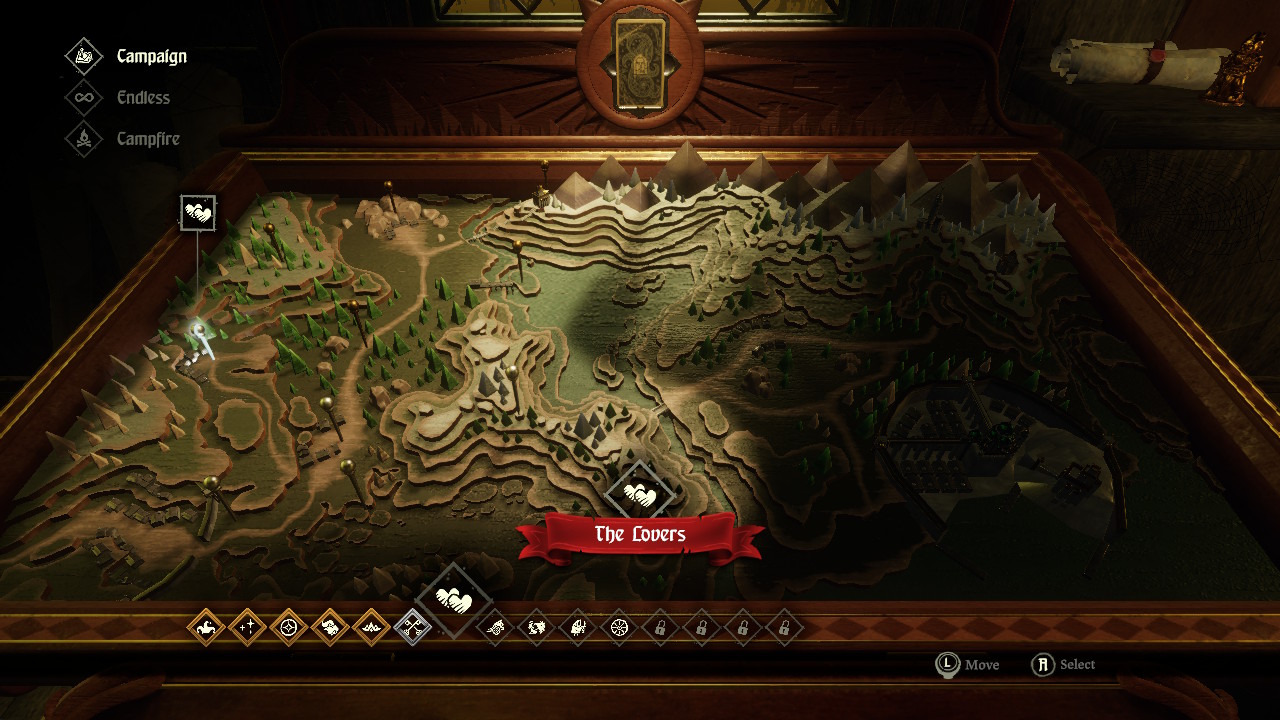 I want to like Hand of Fate 2 a lot more than I do. A deck-builder mixed with dungeon crawling is a fantastic idea. Still, I find myself wishing it was just better. Mostly, this comes down to the combat. Just like the original, the combat is mediocre that adds nothing new. It continues to be the one thing that troubles Hand of Fate 2 and robs it of greatness.

Hand of Fate 2 isn’t just a reskin of Hand of Fate. There are some admirable changes, and some changes that just don’t add anything. You can now kind of customize your character. It really just comes down to choosing a pre-set character and choosing some pre-set color patterns and a pre-set amulet. Yeah, the customization is pretty pointless. Give me real tools to create my own character or just give me a pre-set one. Don’t give me half-assed customization options.

Another change that doesn’t quite work is all the luck/skill based mini-games. There are just far too many of them. You have a spinning wheel that you have to stop at the right time to select a card, you have dice which require you to to roll equal to or greater than the target number, you have the card shuffles where you pick a card from a shuffled set, and you have the pendulum that you have to land on a specific target. This is just a barrage of stuff and the game would feel far more focused if half of it was cut. The wheel and the pendulum are rather similar and there just isn’t a good reason to have both. I also understand why it is an aspect, tabletop RPGs that inspired this game also rely on luck, but I hate luck based games that require no skill. Even in DnD you at least have character stats to help you out. I’m the type of person who, if given a scenario where I have a 50% chance to win or lose, I will lose far more than I succeed. In fact, this happened with Hand of fate 2. One of the game’s 22 challenges, which act as story missions, was filled with 50/50 card draws. I lost all of them. Minimize luck based mini-games.

Hand of Fate 2 offers very little in the way of character customization.

One aspect carried over from the original game and improved, however, is in the deck building. There are a ton of new cards this time around and they all add something fun and unique to the game. The different challenges have different goals and enemies and you have to plan accordingly. If you know you need a lot of money, you can sacrifice some of the item events for money events. If you know you are dealing mostly with thieves, throw in plenty of dual wield weapons. Combining your cards to create the perfect deck for each challenge is enjoyable and adds a ton of replayability to the game.

It doesn’t help that the combat is pretty bad. It’s pretty much just the same as the first game, which was just a rip-off of Arkham Asylum. I’m not sure if it is just the Switch port, but combat makes it feel like you are playing in slow motion. Everything is just so sluggish and unresponsive that it takes any joy out of the experience. You just want to get the combat encounters done as quickly as possible so you can go back to the fun. There are a variety of different weapon types to use, from dual daggers to giant hammers, but I didn’t really notice a substantial difference between them. Some weapon types work better on certain enemy types, but button mashing is such an effective technique for defeating enemies that the damage vulnerabilities feel unnecessary. There is no real depth or strategy when it comes to combat. Even the new companions fail to add anything substantial to combat. These companions are great for their story and their specific story cards do a good job of fleshing them out. In combat, however, they tend to just stand around and get hit. I often forget they are even there. They do have special moves, like Malaclypse’s ability to shield you for a hit, which is at least useful for speeding up the combat encounters.

Something I have no patience for is Hand of Fate 2’s need to put timers on combat encounters. I thought we moved beyond this type of artificial difficulty but apparently not. Goblins that steal your stuff if you don’t kill them within a certain time limit and there is an entire encounter with the wizard companion Malaclypse tasks you with trying to rescue children. You have to kill a certain amount of guards within a set time-limit and I find it nearly impossible. Due to my bad luck and the game’s mediocre combat, I can’t get it. You have to draw cards as you go through the events and losing means you have to fight even more enemies and since my luck is terrible the three times I bothered with this I have to fight about 20 plus enemies in a minute. That mission is everything I despise about Hand of Fate 2 wrapped up in a nice little bow.

Each challenge has a different goal, such as collecting relics.

Hand of Fate 2 is at its best when it leans away from combat. The challenge The Hierophant is one of the better examples. It has you spending time with three different people all of whom could be an assassin. Your job is to find out who plans to kill the leader of the Thieves Guild by finding clues and talking to everyone. This is fun. Solving this mystery has you more engaged than when you are than mowing through enemies with a clock hanging over your head. The writing is great, which is good because there are over twenty different challenges to play through and dozens upon dozens of encounter cards; the game would have benefited enormously if the developers put the same amount of effort into the combat.

It always comes back to the combat. Everything else in Hand of Fate 2 is so strong that the poorly implemented combat system sticks out like Christmas decorations in July. I could tolerate it more in the first game since it was the first of the franchise. However, to see the combat fail to grow alongside everything else in the gaming is disappointing.

Of course, Hands of Fate 2 is bolstered by its Endless Mode, which is exactly what it sounds like. It’s an endurance run through all the different cards you have collected to see just how long you can survive. It is all good fun and is a good way to burn through an afternoon, but not something I enjoy playing regularly. I prefer the structured natures of the challenges more. Still, it is an enjoyable add-on that adds that much more value to the game.

Hand of Fate 2 has stellar writing, fun deck building, and interesting stories. What it doesn’t have, however, is good combat. While I have grown to find the combat manageable, it should be fun and exciting. It stands as an odd blemish that has been carried over from the original while everything else as been prettied up. Still, I recommend giving Hand of Fate 2 a chance, especially if you never played the original. Even with the lackluster combat there is plenty to enjoy here.

Hand of Fate 2 has stellar writing, fun deck building, and interesting stories. What it doesn’t have, however, is good combat. While I have grown to find the combat manageable, it should be fun and exciting. It stands as an odd blemish that has been carried over from the original while everything else as been prettied up. Still, I recommend giving Hand of Fate 2 a chance, especially if you never played the original. Even with the lackluster combat there is plenty to enjoy here.

Austin Fern has been playing video games his entire life. The first console he truly fell in love with is the PlayStation 2 with Sly Cooper, God of War, and many others really leaving an impression. He enjoys all genres of games from FarCry 5 to Danganronpa and everything in between.
Related Articles: Hand of Fate 2
Share
Tweet
Share
Submit