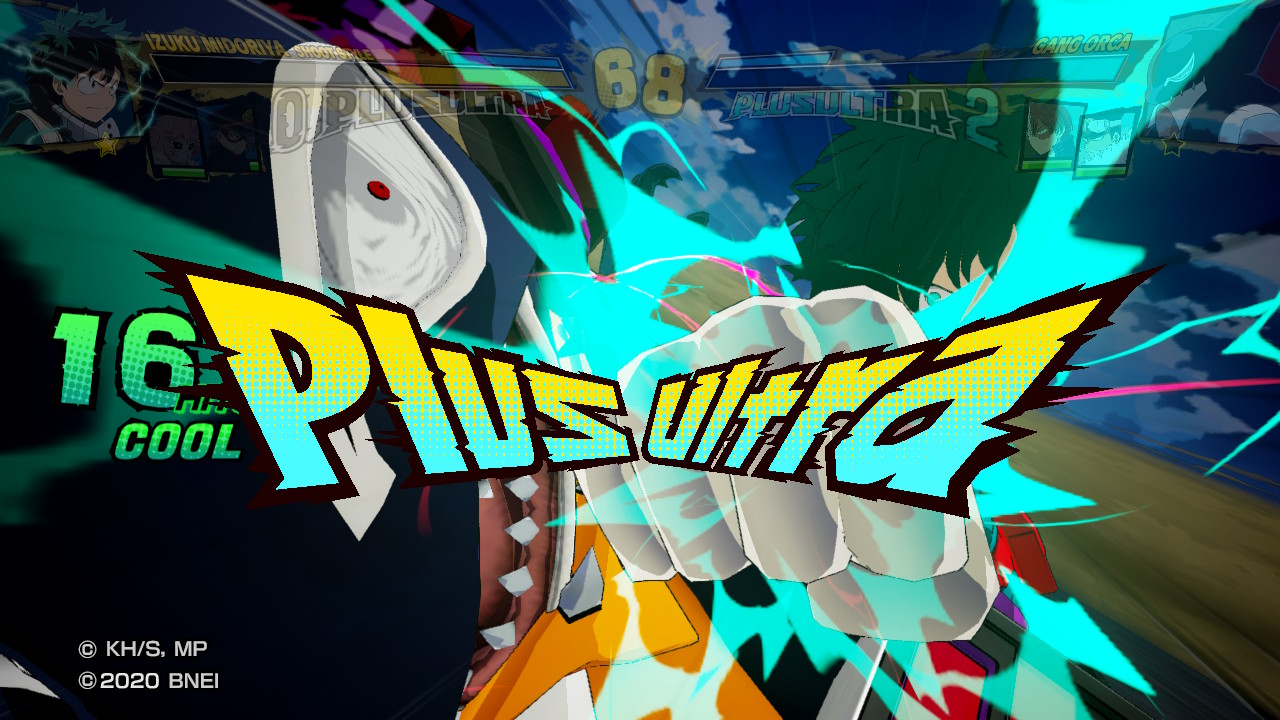 If you grew up in the emerging otaku market in 2006, you might have experienced Clash of Ninja for the Gamecube. While it was a serviceable anime fighter, it was plagued by a major lack of content. Fast forward to… well, later that year and the sequel to that game was released as a much better entry point to fans and newbies alike. Why am I leading this My Hero One’s Justice 2 review with a Naruto anecdote, you might ask? Well, it seems like Bandai Namco learned from its mistakes with 2018’s arena battler My Hero One’s Justice and has fine-tuned the experience with an increased roster to make a wholly enjoyable fighting game that’s a fun time for all. 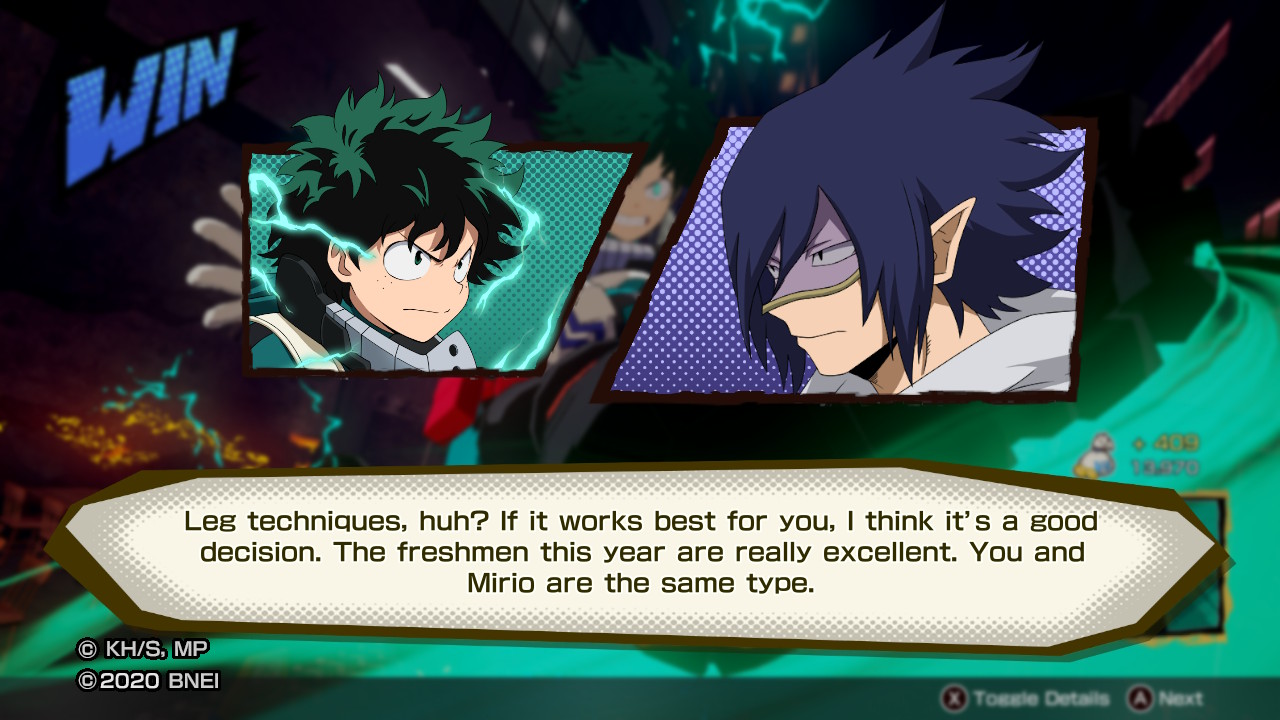 My Hero One’s Justice 2 is a one-on-one 3D arena battler that pits two characters against each other, with up to two assisting characters joining your team. While you have an arsenal of attacks and Quirks (the MHA universe’s term of powers) at your disposal, you can also utilize Plus Ultra attacks which are dependent on a meter that fills up gradually. You can also call your teammates to attack, save you in a pinch, or deliver their own Plus Ultra attacks if you have the meter for it. It’s a simple formula that can also be made easier thanks to auto combos (though I recommend these to be turned off when you get into high-level play). Combat is accessible though much more diverse with character types, as some rely on close combat while others can pick opponents off with zoning techniques. I enjoyed the difficulty in later battles, as it meant I couldn’t just haplessly mash my attack buttons in order to win; there are techniques like unblockable attacks that will interrupt your own, and smarter computers will use these to pummel you into the ground. 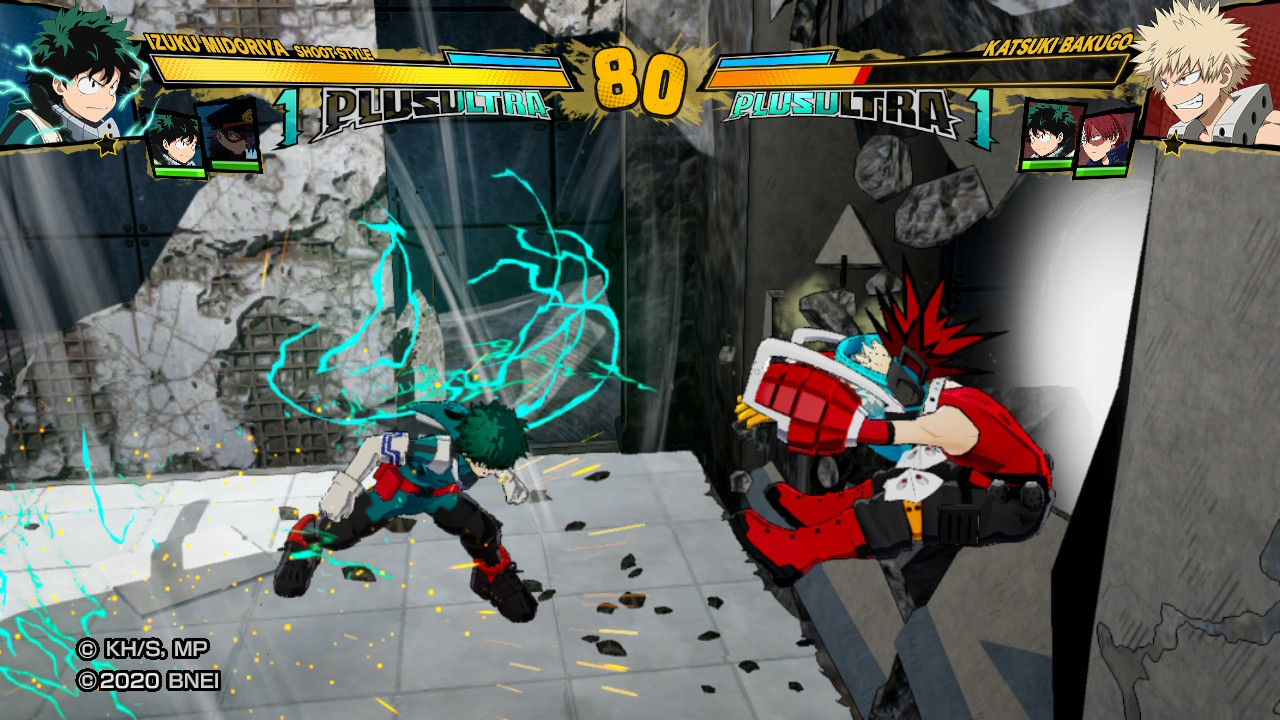 While the first game made the combat feel bland and uninspired, here it’s made much better thanks to the addition of a whole lot of characters and stages. The base game boasts a cast of 40 heroes and villains (including alternate versions of Midoriya and Chisaki), as well as post-game DLC to come soon; pro hero Hawks is one of the first announced characters to be released. Each of the new characters brings something different to the table, from the acid-spewing Mina Ashido to mentor Sir Nighteye. While not every character’s moveset translates well into a fighting setting (for some reason I couldn’t get Aizawa to work well for me, and he was even in the first game!), there’s a lot of variety here. I was surprised with a few additions, such as Yoarashi’s teammates and pro hero Fat Gum, but they all fit in some way. Here’s hoping we can play as more of Class 1-A; my boy Ojiro didn’t make the cut this time around, but perhaps as DLC? 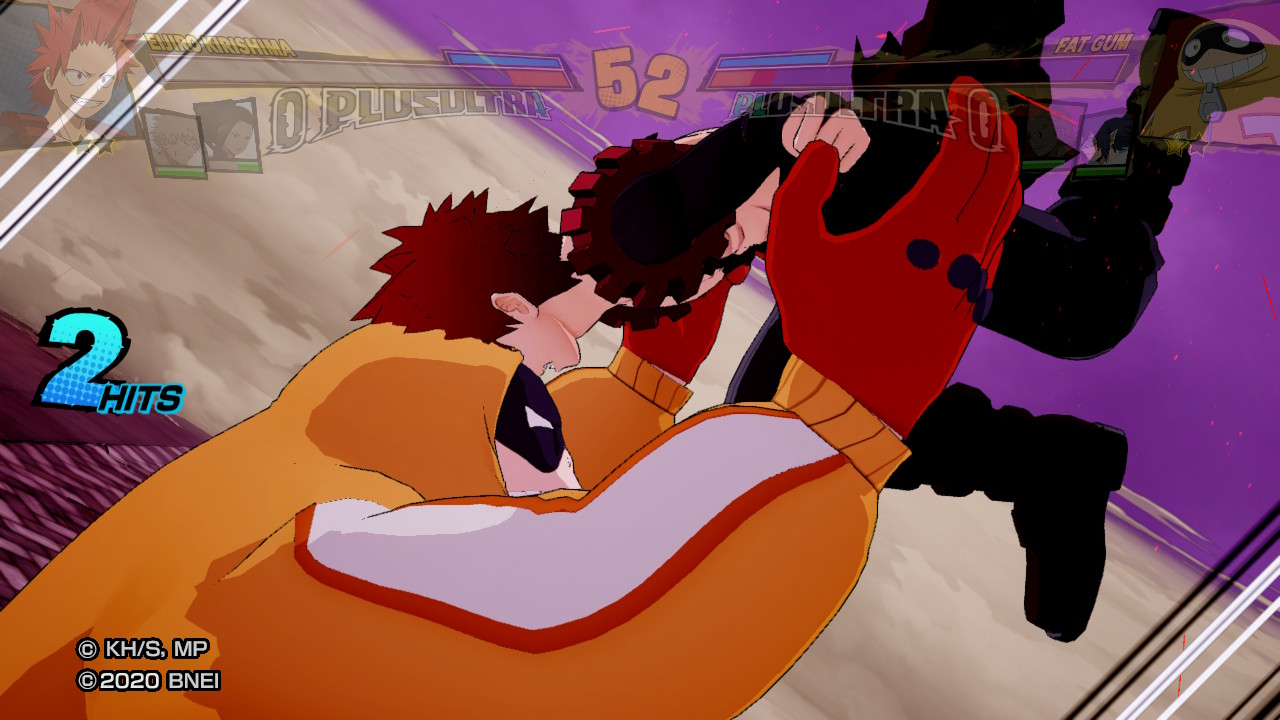 Like most anime fighting games, My Hero One’s Justice 2 follows the plot of the current story of its source material, up to season four’s Shie Hassaikai arc. It begins where the previous game left off, with class 1-A living in dorm rooms while Midoriya and Bakugo have an emotional discussion about the aftermath of All for One’s battle. From here, the main story mode also delves into the introduction of new heroes and villains like The Big 3 (led by Mirio Togata, otherwise known as Lemillion) and Overhaul, and ends at the aforementioned story beats. Overall, it’s a good recap for those that need a refresher, though it might not be the best way for newcomers to experience the story. Another mild point of contention is that we still don’t have a proper rehash of season 1 and part of season 2, as My Hero One’s Justice only covered bits of season 2 and 3. However, I did appreciate the inclusion of a longer campaign as well as the villain side that’s unlocked after you finish the main story. I wish that there was more interactivity here, as the cutscenes are told in comic book panels; it works for this type of series (since, well, it’s based on superheroes), but I would rather have actual cutscenes than still frames. Also, it might be an unpopular opinion, but I wish that this series would have a dubbed version as well. If the Naruto games can have one, why not this?

If you’re not into a retelling of the main campaign, there are a few other modes you can try out; the arcade mode, while essentially a string of battles that you can select in order, is still a nice addition thanks to some voiced interactions between all of the people you face. I would have appreciated this to have the stills like in the story mode, but it oddly works out pretty well; you select a route based on difficulty and face opponents by selecting a set of cards. 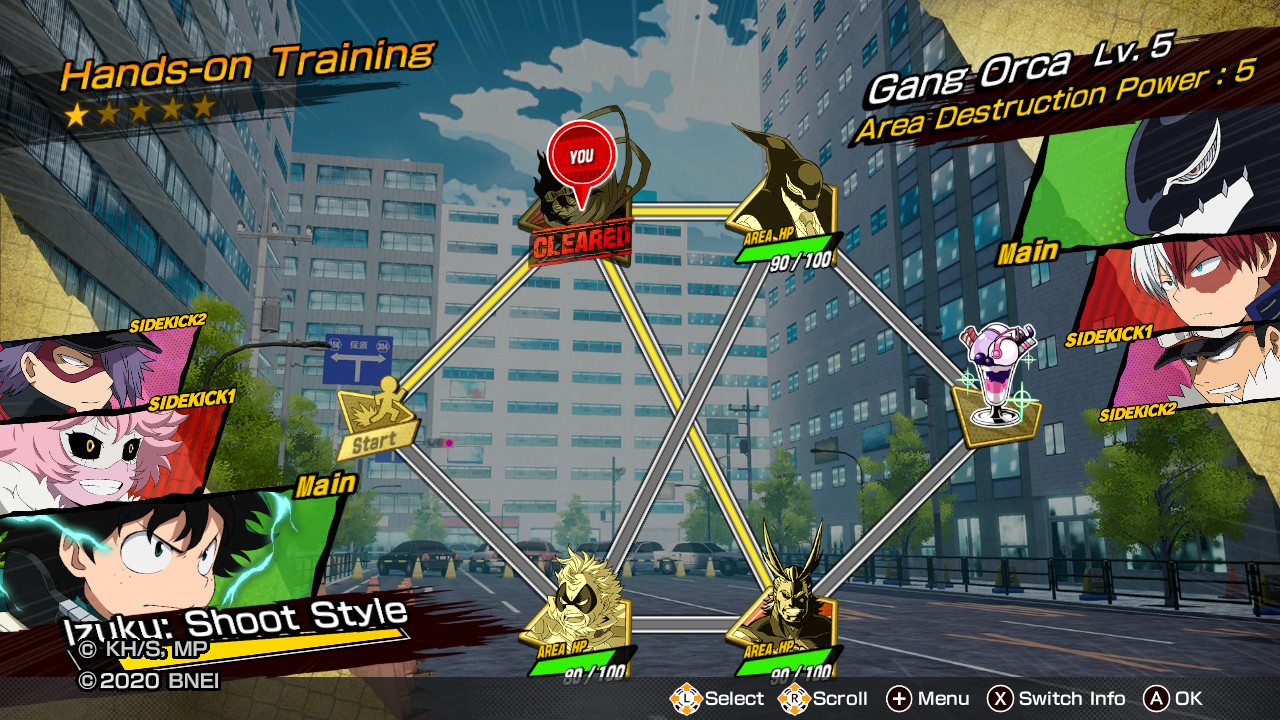 On the other hand, you have mission mode, which I would have liked more if it was implemented better. You choose your character and can “scout” others with in-game currency to fight on a tactical map ala Blazblue’s Legion mode. You bring your team of three characters to battle, fighting against opponents who are destroying a map area. If you can beat them, you stop the destruction and can move on to other spaces. By beating every opponent, you will win the mission and obtain some items; lose, however, and you will lose assist points with your team. Lose enough times, and your team will leave, which means you’ll have to hire them again in order to use them. It’s a pretty neat mode, but unfortunately it also has RPG-like mechanics where you level up your team every time you play a match. Unfortunately, the maps go up in level almost exponentially, which means you’ll have to grind a lot of times on the earlier maps if you want to even try to stand a chance. (Alternatively, you could just get good at the game, but there are times when even that isn’t enough.) It’s a shame that this mode couldn’t get balanced to a finer degree, otherwise I would recommend this as a great secondary mode.

Aside from the main modes, you can also have online battles and experience limited time events in order to receive customization options for your characters. Online battles are solid and feel like something out of the Naruto: Ultimate Ninja Storm series, which means they’re smooth for the most part. The customization feature returns in this game, and while it’s not something as comprehensive as other Bandai Namco games like Tekken 7 or SoulCalibur VI, it’s still fun to dress your favorite hero or villain up in a silly getup. It also helps that rarer items cost a lot of in-game currency, which means there’s incentive to play more and get more currency here. All in all, My Hero One’s Justice 2 is a complete package that’s definitely worth the full price tag for fans. 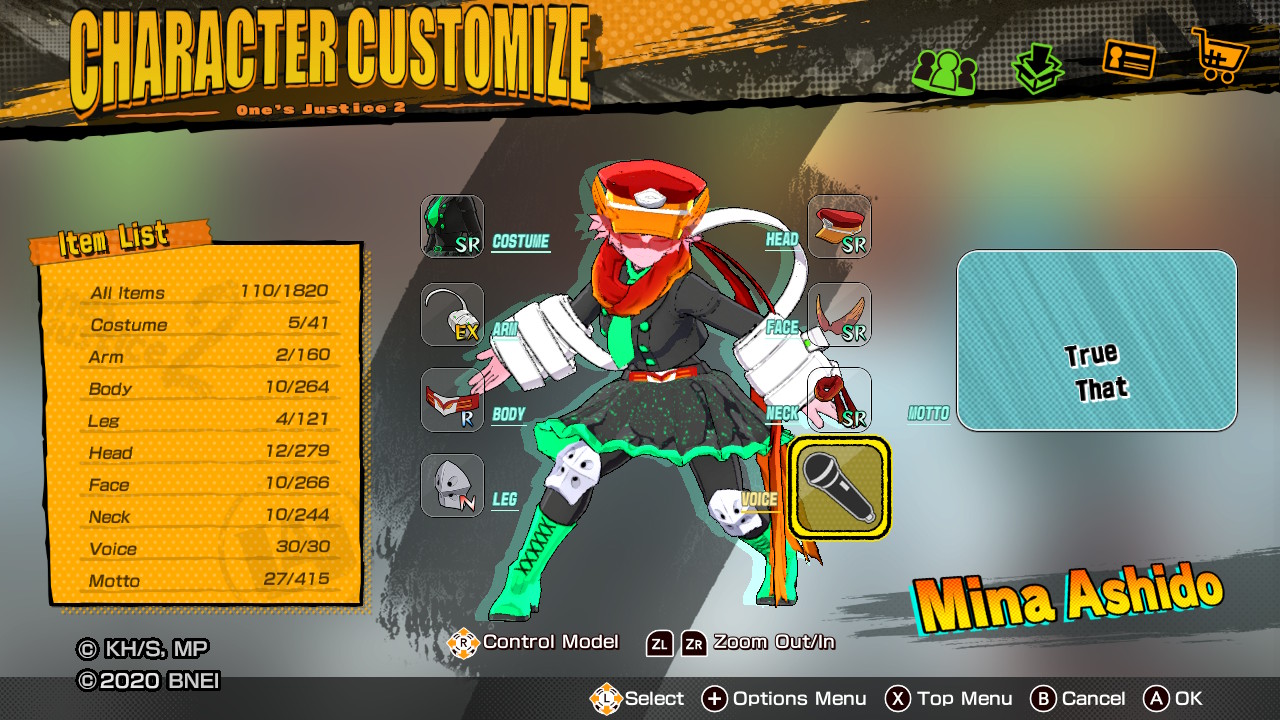 An improvement in every way to the last game, My Hero One’s Justice 2 is a wonderful title for fans of My Hero Academia. With an improved roster and enhanced gameplay, it’s time to go Plus Ultra with this fighting game at last.

Elisha Deogracias is an aspiring accountant by day, freelance writer by night. Before writing for Gaming Trend, he had a small gig on the now defunct Examiner. When not being a third wheel with his best friends on dates or yearning for some closure on Pushing Daisies, he's busy catching up on shonen manga and wacky rhythm games. Mains R.O.B. in Smash. Still doesn't know if he's a kid or a squid.
Related Articles: My Hero One's Justice 2
Share
Tweet
Share
Submit